the most relaxed turkey day that ever was

thanksgiving day around here was super chill and relaxed, just the way i like it.  and as the weather people had forecasted, it was cold and super rainy - which was lovely considering that it was like 85 degrees last year (and also the year before, i think).  cousin seven had connected with me a couple of weeks prior to coordinate a barre class together, and i roped the old lady in to go with us, so we met at the studio for a 7am class.  nothing like burning off calories before you eat 'em, amirite?

my now-traditional thanksgiving tee made an appearance, of course: 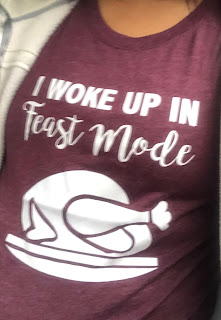 it was an "express" class, which meant it was 45 minutes instead of an hour.  it was fast-paced and perfect, and we were sore and sweaty at the end of it. 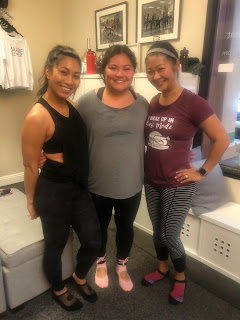 seven came over to meet cocoa and teddy, who were super stoked to see her. 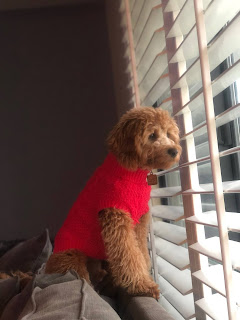 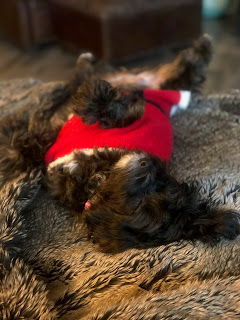 after she left, we got ourselves cleaned up and ready for the day...which kind of consisted of lounging around munching first on pancakes and bacon for breakfast and then some beef vegetable soup for lunch.  and then it was time to stretch out on the couch and take a nice little nap. 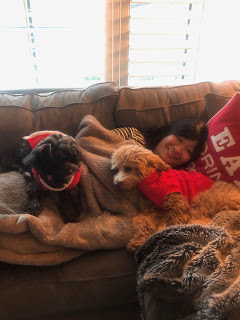 we were heading over to a friend's house for dinner with the turkey, scheduled for about 6:30ish.  i'd bought a 15-lb turkey and calculated the cooking time using the butterball website, which had me getting up around 2 to start getting it ready to go in the oven.  the bean wandered in while i was unwrapping it and i thoroughly enjoyed grossing her out as i pulled the neck and giblets out of it. 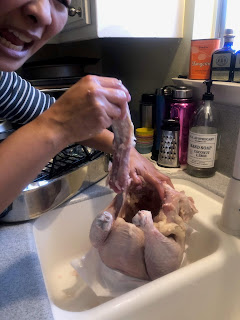 and as it turned out, the inside of the turkey was still partially frozen.  d-oh!  i scooped ice out of the cavity and hoped it wouldn't delay dinner too much.  and then i reached in to pull the skin away so i could slide some pats of butter and seasoning in there. 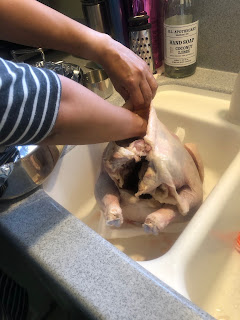 once the bird was in the oven, i got started on the sweet potato casserole and then settled back onto the couch with the kids and the dogs.  it was funny to watch them fight over toys and wrestle and roll around together (which is a daily occurrence, pretty much, but is still entertaining as hell). 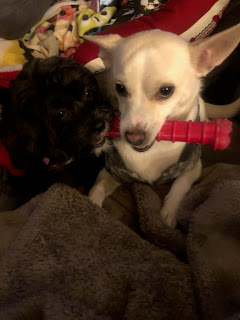 when the timer went off on the oven, i poked the turkey in several spots with my meat thermometer and found that the areas that hadn't fully thawed were indeed not quite ready.  it ended taking almost another hour, which threw my sweet potatoes behind schedule as well, so the hub and the bean went ahead to our friends' with the turkey so they could get it carved and ready to serve.

about 20 minutes later, the old lady, her special friend and i finally got out the door and drove the five minutes over to meet up with everyone else.  it was super casual and we slid right in and made ourselves plates to start chowing on.  i was bummed that i hadn't gotten a picture of the finished turkey amidst all the hustle and bustle, so this is the only food shot i have from dinner. 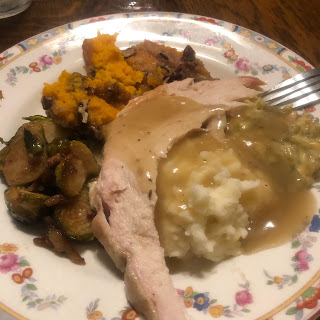 everything was delicious, and most of us had a second plate washed down with delicious, rich homemade hot cocoa.  and before we left we managed to get a family photo: 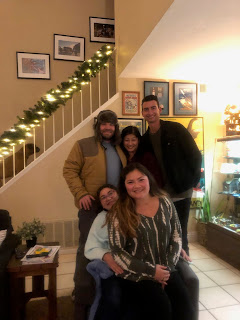