heading out for father's day

father's day 2020 was a little different from mother's day 2020.  for some reason, the governor decided somewhere in between that it was safe to open restaurants and shops and things...even though we're now number one in the country when it comes to COVID cases. winning!

the hub really wanted to go out for a nice family meal though, and while we couldn't snag a dinner reservation at his restaurant of choice - fleming's in pasadena - we did grab one for a late lunch.  it was at an odd enough time that we were able to request seating outside on the patio, which i much preferred to sitting inside an enclosed restaurant with other patrons.

there were lots of social distancing guidelines in place, like a QR code to scan for digital menus and markers placed outside at least 6 feet apart for parties to wait for their tables.  hand sanitizer was available at the front desk, and directional arrows were placed on the floor to direct what traffic there might have been.  the hosts and hostesses were all wearing masks and all servers wore face shields and disposable gloves.  i suppose it was about as safe as it was gonna get.

i didn't take a lot of pictures, because i was just trying to relax and have a good time with the hub and the kids.  and i have to admit, it was nice to share a meal with our little family somewhere other than the back yard.  the hub and i both opted for the father's day special prix-fixe meal, which included salad, main entree and dessert.  i only took a picture of the entree because it was fabulous - a bone-in ribeye steak served alongside a perfectly cooked lobster tail. 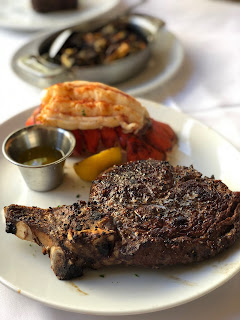 outside, i managed to get the girls to stop and pose with the hub for a quick masked photo. 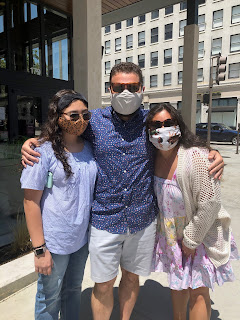 back at home, we presented him with some fun cards and the one present we could think of that he would like.  he's notoriously difficult to buy for, although he's always grateful for anything he receives and usually discourages us to get him anything at all.  he'd mentioned a few weeks ago that he wanted the backpack-style yeti cooler, and so i'd latched onto that tidbit of info and filed it away for later use.  the bean had drawn him this funny mask out of a piece of styrofoam she'd fished out of one of the boxes in the garage, and he loved it: 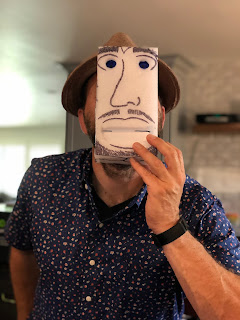 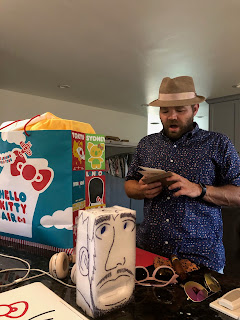 and as expected, he loved the yeti. 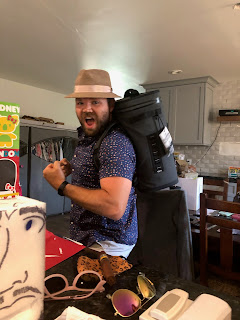 i realized that it had been quite awhile since we'd taken a picture together, so i cornered him as he was enjoying a cigar poolside. 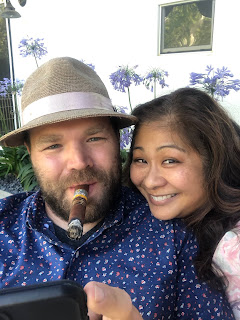 funny thing...even though it was father's day, he'd gone that morning to pick up a curbside order for something i've wanted for a long, long time.  check out MY father's day present! 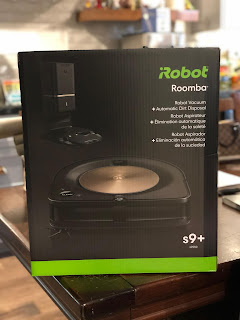 while he headed off to the lounge for one of his semi-regular visits to check up on things and make sure all is well, i plugged that bad boy in and got it all set up.  i downloaded the app, named him R2 and hit the button to start him on his trial run around the house.  cocoa was...a little apprehensive about the newest member of the household. 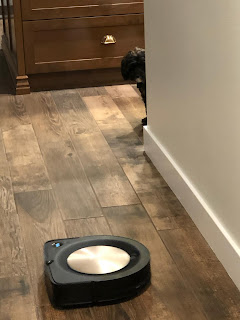 she and teddy seemed to have switched personalities - while she's usually full of bluster and bravado, something about R2 didn't sit well with her and she avoided him at all costs.  teddy, on the other hand, who's usually a pretty big scaredy cat, was super curious about the new robot and stayed nearby for the duration of that trial run. 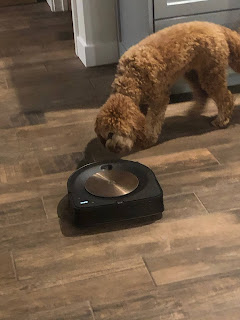 i wonder how they'll feel when D2 arrives.  D2, of course, is R2's robot mopping sister who's on backorder and is scheduled to join the household any day now.