the bean is constantly showing us recipe ideas for snacks and treats and things she comes across on youtube.  most of the time, i'm shaking my head because they're usually pretty outlandish or incredibly unhealthy or simply just too much for me to comprehend.  but then she showed me a video of a rainbow crepe cake that she really liked, and while i pretended it was way too complicated, i made a mental shopping list of the ingredients and picked them up at the grocery store.  i felt bad saying no to everything she showed us, and while i knew this cake would be time consuming it was totally doable.

being on summer break, she's been sleeping in every morning - which gave me the perfect opportunity to mix up the batter and stick it in the fridge to chill per the instructions.  and then we got distracted with cleaning and organizing and unpacking boxes and all that fun stuff during the day.  so it wasn't until after 8:00 that night that i finally found the time to start working on cooking those crepes.  the first step was dividing the batter evenly into six bowls so that i could add the colors of the rainbow to them.  and it was while i was pouring it all out and picking out the food dyes from my collection that she figured out what i was doing.  the smile on her face was totally worth all of the effort i knew i was about to put in.

mixing up the colored batter didn't take too long at all, and then i was ready to start cooking. 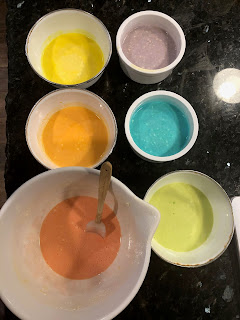 i preheated the pan on the stove and then poured in the first crepe using the red batter. 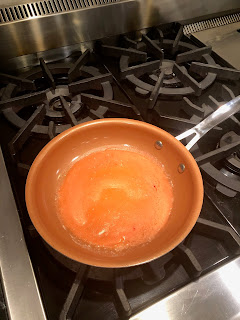 now, while i've made crepes before i've only ever used a gadget specifically made for crepe making.  i wanted to make them the traditional way on the stove, and while there was definitely a learning curve it only took the first couple of crepes for me to get it right.  each color yielded four crepes, and while it did end up taking a good amount of time to get through it all, i used the cooking time to walk around the kitchen trying to up my step count for the day.  by the time i was done, it was pretty late.  but look how fun! 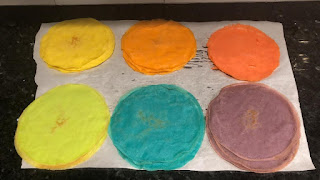 i ended up placing the stacks of crepes into a ziplock and putting them into the fridge to assemble the next day.  i'd decided to take the easy way out and had bought a tub of cool whip to spread between the crepes, and even got to bust out the cake decorating lazy susan that my mom gave me ages ago that i'd never had the chance to use.  with the bean's help it didn't take too long before we were already halfway done: 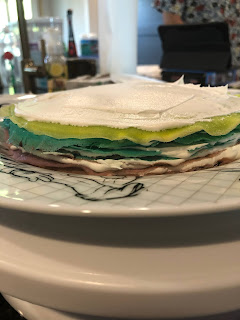 and then the old lady suggested that we do a time lapse video, which would probably have been even better had we thought of it when we started this project.  better late than never though, right?


voila!  all done!  the old lady and i wanted to top it with sprinkles, but the bean nixed that idea.  and since this cake was really for her anyway, we went with whatever she said. 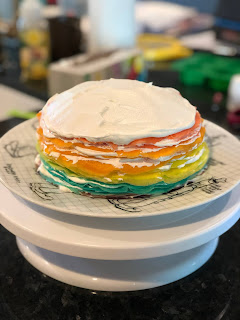 and she, of course, got the first slice. 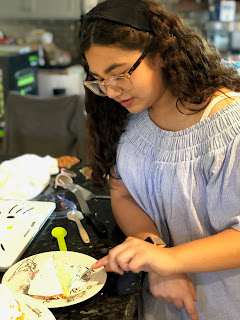 i was pretty excited at how pretty it was when i sliced into it.  and the bean said it was really good, which i was pleased to hear. 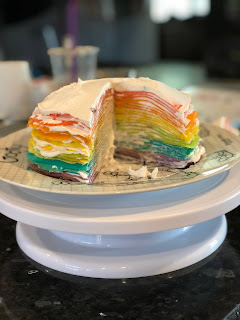 guess i can cross another item off of the ol' cooking bucket list now!
at June 23, 2020

Email ThisBlogThis!Share to TwitterShare to FacebookShare to Pinterest
Labels: adventures in cooking, rainbows are fun