the last trimester of 6th grade for the bean was definitely not like anything we could've possibly imagined.  while the transition from regular school to distance learning was fairly easy for her, she really did miss her friends and her teachers.  thank goodness for technology, because between zoom and text messaging, she was able to keep in touch with everyone on a regular basis - but still, it wasn't the same.  and it was a big bummer for everyone that they didn't get to do science camp or their end-of-year trip to knott's berry farm.  damn you, COVID.

but she was super excited when two of her oldest friends did a stealth drive-by and dropped off some fun surprises for her on the driveway: 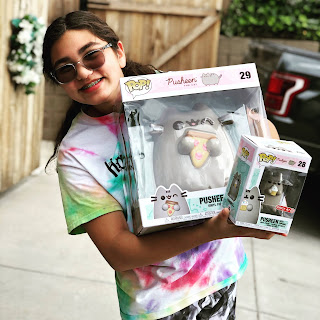 and she was pretty happy to be able to participate in a surprise birthday car parade for her BFF, mini cee.  she spent an entire morning working on this poster for her: 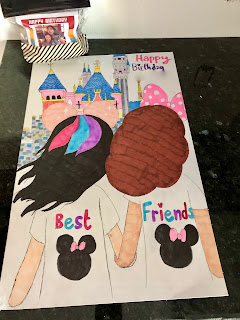 it went by so fast though, as those things do.  mini cee looked really excited to see her friends as we all drove past, waving and shouting birthday greetings to her.  and the bean told me that she texted her later that afternoon to tell her that she hung the poster in her room as soon as she got back inside. so sweet. 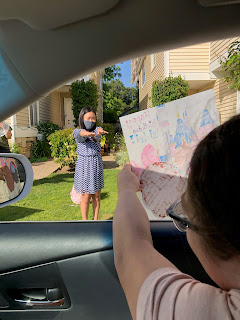 the bean was the first one to get to plug in her laptop and do some actual work in the new office that we'll be sharing.  the dogs were perfectly content to sit at her feet while she sat in class that day. 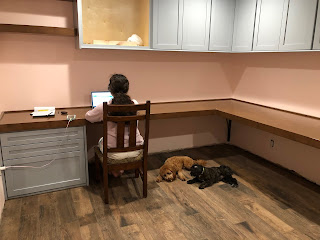 junior high academic awards were done via zoom this year, and while i'd received an email that gave me the heads-up that she was going to receive one i just assumed that it was acknowledging her spot on the principal's list.  we were all surprised and proud when her yearbook photo flashed on the screen with the announcement that she'd earned the 6th grade history award: 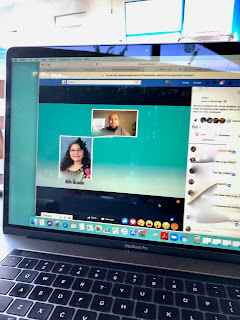 i finally got to pick up her cheer portrait for this season.  she swears she's done with cheer (and who knows if there'll even be a cheer season anytime soon), so this photo is extra special. 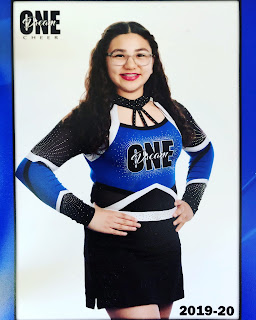 we celebrated the last day of actual schoolwork with a delicious take-out sushi dinner: 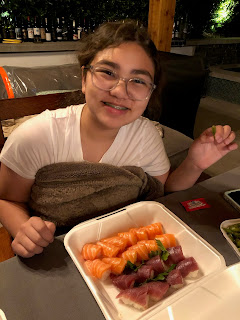 and then the last week went by in a blur.  one day, they got together on zoom and played a bunch of games and reminisced about the year.  the next day, we got to return to campus briefly so that we could return textbooks and pick up all of their personal items that had been left in their lockers.  because they staggered the times based on students' last names, she only got to see a few of her friends but was able to say hello to all of her teachers.  her math teacher had just announced that he isn't returning next year, so she'd scrambled to sew up a cute little present that she was super excited to give him.  even with his mask on, he was visibly touched as he noticed the effort she'd put into it.  she'd outfitted him with a tiny mask and the iguana is some sort of inside joke the class had with him. 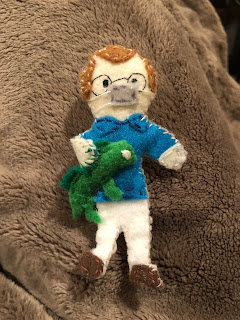 on the last day of school, the two homeroom teachers hosted the final zoom meeting to hand out a few final awards.  she was given a character award for "courage," and it was really nice to hear what the teacher had written that gave examples of how they'd chosen that specific trait to highlight for her.  the kids turn in little anonymous notes that they give the teachers to praise their classmates, and she beamed with pride as she heard all of the kind words her peers had written about her. 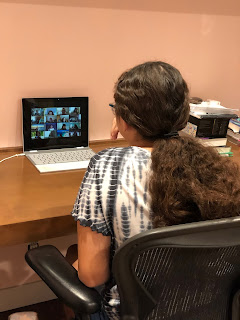 i'd dug out the ol' chalkboard to take the annual "last day" picture, and this time around we had her pose in front of the not-quite-complete fireplace.  next time we take a commemorative photo here, it'll look different - but so will she. 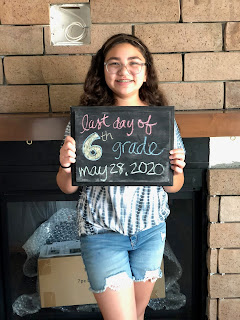 the hub kept making her laugh as he made faces and did silly dances, and this is my favorite outtake: 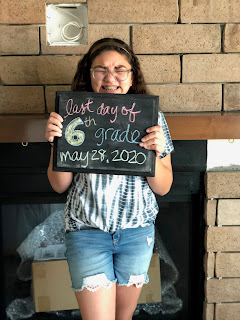 we'd picked up her academic awards along with her locker stuff, so i had her pose with those too. 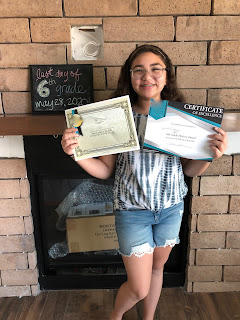 a little later that day, we were in the middle of our dance fitness workout (shut up, it's the only way i can get her to exercise with me) when the doorbell rang.  she was so stoked when i answered the door and brought this giant basket of cookies and brownies sent by her grandparents: 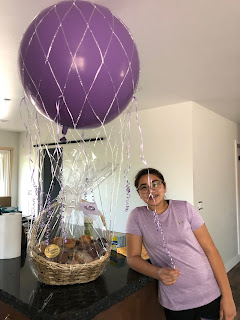 i loved how she'd inadvertently color-coordinated with the gift.

and then i was also pleasantly surprised to check the mail and find that something i'd ordered for her weeks ago had magically arrived that day too.  i handed her the package and she squealed with joy when she opened it to find this.  i mean...doesn't everyone need a giant squishy boba pillow? 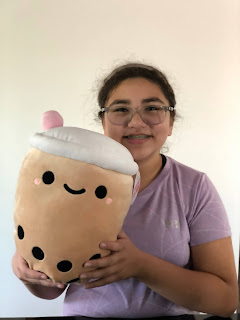 Email ThisBlogThis!Share to TwitterShare to FacebookShare to Pinterest
Labels: last day of school, the bean is an artist, the bean is in junior high