one of the things we miss most during this time of covid is - well, i'm sure you can guess - disneyland.  our last visit was in february, just as they'd kicked off the food & wine festival, and then of course the bean and i had our very brief disney world trip in early march.  just as we returned home from that trip, everything shut down and life as we currently know it began.

disneyland was slated to reopen july 17th, just in time to celebrate the 65th anniversary.  but of course, with the virus still running rampant and no end in sight, that was postponed - rightly so.  as much as we miss going, i don't think we'd have felt comfortable going back just yet.

with the parks and hotels still shut down, downtown disney reopened for shopping and outdoor dining on july 9th.  via twitter we could see that it was quite the hotbed of activity, despite the grumbling about wearing masks and temperature checks and limited availability of shops and restaurants.  the parking lot was often reported as full to capacity, and we stayed far away.

we waited for about six weeks before we even entertained the idea of making a visit to get a dose of disney magic.  i asked the old lady how she felt about heading down even just for an hour or two, on a weekday when we knew it would be much less crowded, and without hesitation she was in.  we decided to keep it a surprise from the bean, and on thursday afternoon we hopped in the car and drove the familiar route down to anaheim.

the bean let out an excited "yes!  i was hoping this is where we were going!" as we pulled into the resort area.  the simba parking lot behind paradise pier hotel is the only parking currently available, and right now it's free for downtown disney guests.  judging from the number of cars in the lot, a weekday visit was definitely the right choice. 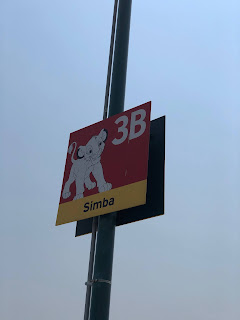 as we made our way through the lot and towards the fun stuff, we took note of all the new signage that had been placed since covid began. 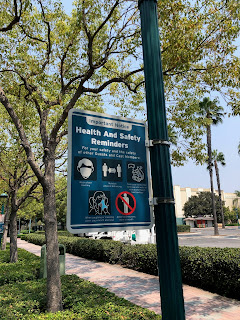 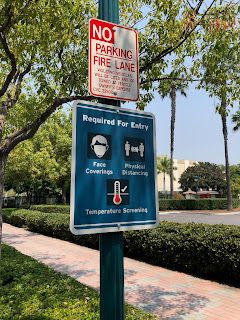 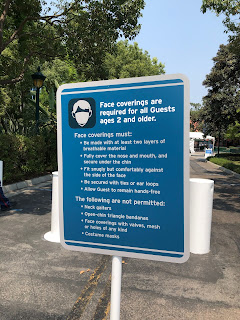 when we got to the security tent, we were asked to keep the whole party together while they did a contactless temperature check before walking through the metal detector.  we'd left our purses in the car, so bag checks weren't necessary for us. 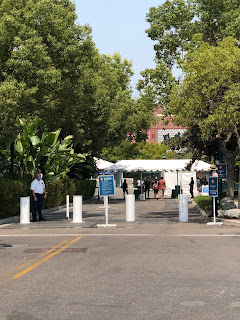 just a few steps away was this hand sanitizer station.  i stopped to get some, but it was empty.  hmm. 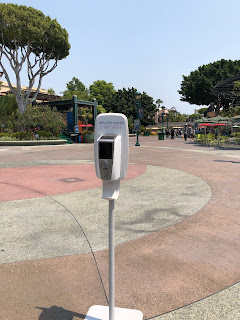 and then we got our first look at downtown disney since february.  sigh. 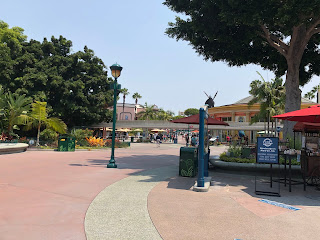 we hadn't had lunch yet, and so we decided to head to black tap for some grub.  we've never, ever seen it this empty before - although duh, there's no indoor seating so everyone was sitting at tables outside after placing their orders. 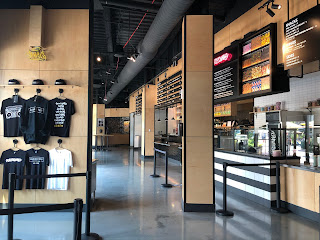 the bean was super excited for her nutella shake: 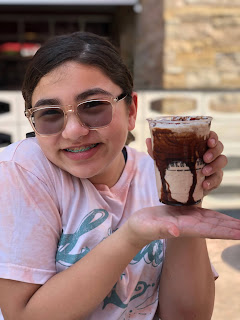 and because of a weird mixup from placing our orders the old lady and i ended up sharing her chicken caesar salad.  somehow the salad i'd ordered for myself didn't actually make it on the ticket, and i didn't really want to get up and reorder it and wait again.  oh well.  the salad was a fairly generously sized portion, so it was plenty for us to share.  and we agreed that it was really good - better than we'd expected and definitely better than it looks in this picture.  heh. 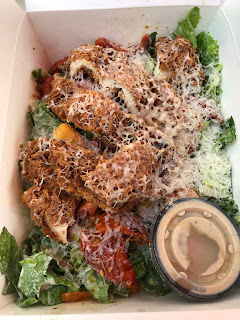 after we finished lunch, we headed over to world of disney to join the virtual queue for entrance.  there were cast members standing in the tram loading area who took our phone number and number in our party, and let us know that we'd receive a text when it was our turn to enter the store.  the wait at that time was about an hour, and so we decided to head over to the main entrance esplanade.

we stopped at this hand washing station, because it's always a good idea to wash your hands whenever you get the chance. 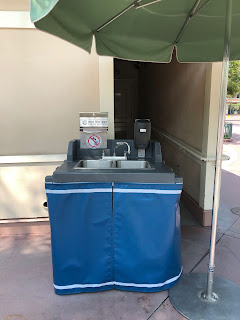 the esplanade was rather sad to see, with the music playing like normal but no excited parkgoers in sight. there were a couple of cast members stationed near the gates and a few visitors like us, taking pictures and gazing wistfully inside the gates at the empty parks.  it was so bittersweet to be there. 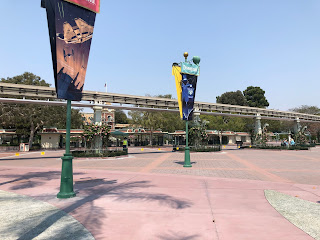 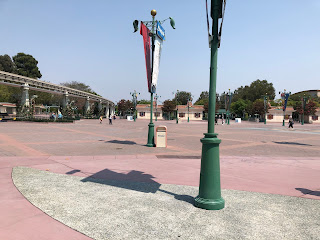 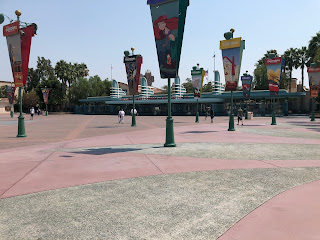 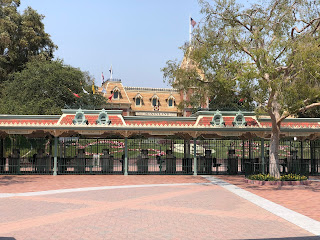 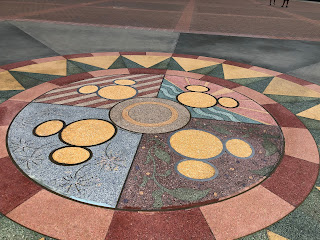 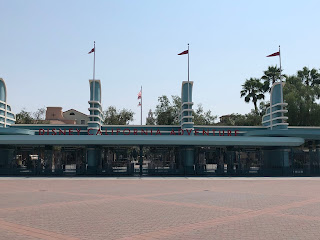 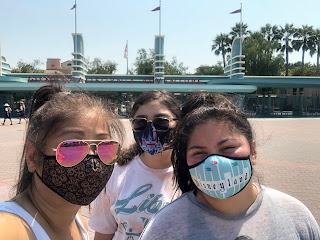 as we wandered back through downtown disney, the old lady received the text that told us to head on into the line to enter the world of disney store. 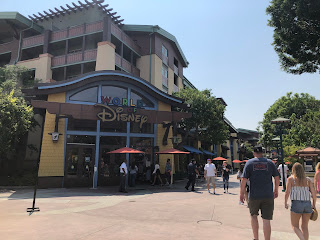 on our way there, the old lady noticed a couple of girls who were walking along holding their masks in their hands - and a cast member scurried right over and asked them to put them on.  good.

there were a few groups in line ahead of us, but as is the disney way the line moved pretty quickly. 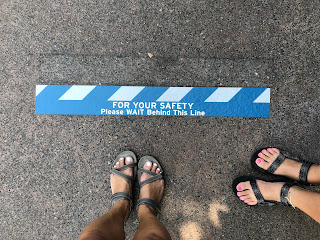 by the way, if you're looking to usher in halloween extra early, disney's got you covered. 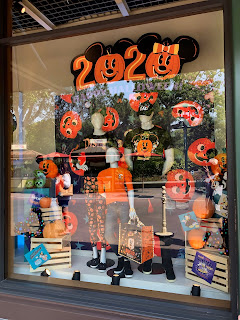 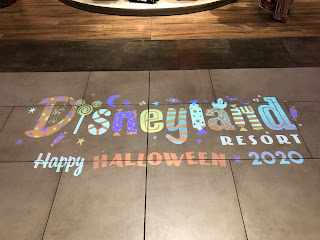 once we left the world of disney, we called it a day.  i waved goodbye to the disneyland hotel as we headed back to the parking lot. 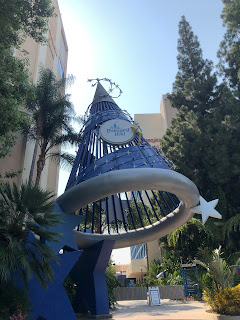 and as we made our way out of the lot, we got one more glimpse of the sadness that is the empty california adventure park. 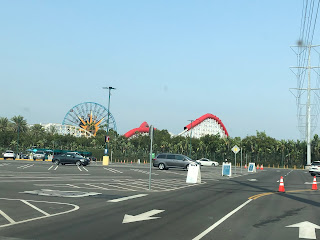 big sigh.  i don't know if that made missing disneyland better or worse.  i wouldn't be surprised if they stay closed until 2021, and even if they did open i don't know how we'd feel about going just yet.  it's a total first world problem, i know.  but still...it bites.
at August 27, 2020