family dinners are the best

we've been really enjoying family dinners in the last few weeks.  the hub comes up with some really fun ideas for what we can have, and then we all work together to make it happen.  like last tuesday, when he suggested ribeye and shrimp tacos.  it was the most epic taco tuesday yet, especially since the hub was able to find some keto-friendly tortillas at the grocery store that he said were pretty tasty. 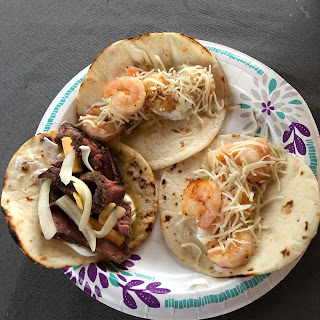 another idea he had was make-your-own-pizza night.  and then he got a bug up his butt to find a pizza oven for the back yard (which actually is a great idea since pizza is one of my most favorite things on earth).  except that the one he really wanted apparently is sold out everywhere, with every single retailer in southern california completely sold out and backordered on the manufacturer's website.  of course.  and so we just settled for making pizzas in our oven, which luckily gets pretty darn hot on its own.

i'd found a recipe for a keto-friendly cauliflower crust, which the old lady decided she wanted to try as well.  and so after a quick trip to trader joe's, she got started on the dough while i scurried around making the marinara sauce.  after she mixed up the first batch, it looked like this: 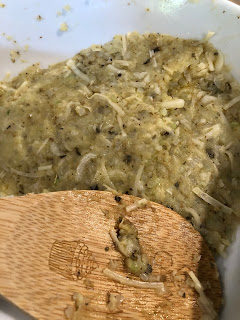 then we shaped it into a circle on a piece of parchment paper for baking: 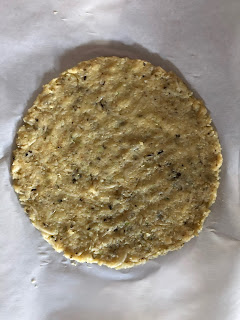 and about 12 minutes later we had keto pizza crust.  we realized later that we should have left it in for a few more minutes to get it a little more crisp, but flavor-wise it was pretty darn good. 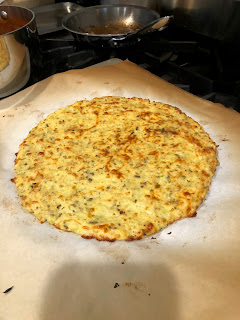 the hub was pretty pleased with his finished pizza. 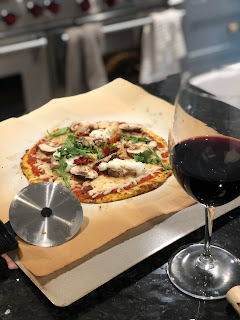 and the rest of us used premade dough that we'd picked up during that trader joe's run.  i'd always heard good things about it, and now it's confirmed.  super easy to use and bakes up really nicely. 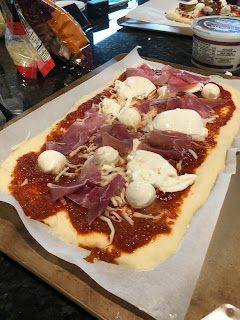 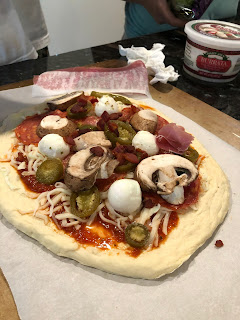 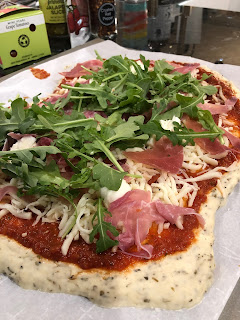 another night we decided to do a roasted chicken taste test, which was really intended for me to test out the rotisserie function in my air fryer.  except that when it was time to start cooking i couldn't find the stupid attachment anywhere.  i was so annoyed, especially since i'd looked at every single chicken at the grocery store in search of one that would fit in the air fryer (the rotisserie can only accommodate up to 4 pounds).  and so i ended up just putting it in there and flipping it halfway through the cooking time.  i had a second, much larger chicken roasting in the regular oven so we could compare the two and see if there was a difference in taste with the two cooking methods.  the air fryer chicken came out beautifully: 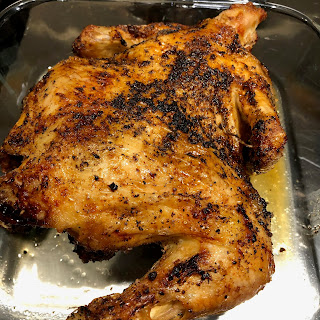 as did the one in the oven. 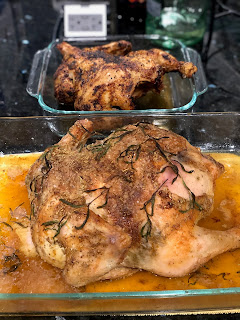 there was garlic parmesan broccoli and crunchy asparagus fries on the side, along with some garlic parmesan pasta that the old lady made for us.  it was a pretty fantastic dinner, with a tie declared between the two chickens.  both came out juicy and flavorful, and no one could pick a favorite. 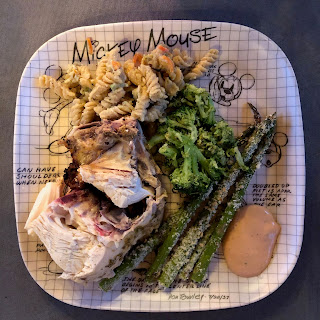 oh, by the way, this is teddy. 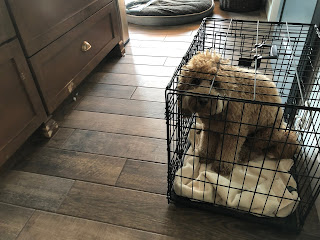 teddy spent some time in his much-hated crate, strategically placed in the kitchen because we discovered that he had decided to treat the island as his personal giant chew toy.  OY VEY. 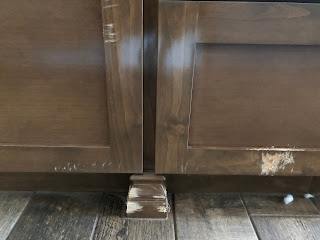 and then we put him in the pen instead because it'd been a long time since he'd been in the crate and while he had plenty of room to lay down in it (which he did without yelping and crying because he KNEW he'd screwed up big time) and i hadn't realized he'd totally outgrown the damn thing. 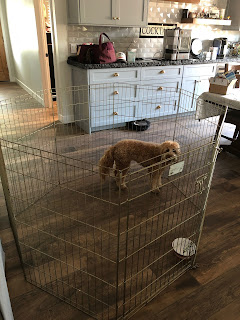