i opened instagram one day to find that i had a message from one of my friends, who'd forwarded me a post that she thought i might find interesting.  it was from someone who's a cast member at disneyland, asking if anyone knew a baker who might be available for an order of 500 cookies with a pretty short turnaround time - as in, it was a monday with delivery the following friday.  eek.

the story had already been posted for an hour, and so although i figured that they probably had already found someone i responded anyway.  because why not, right?  and wonder of wonders...they got right back to me asking for pricing and confirming that the quick turnaround was doable.  they sent me a couple of photos with the designs they wanted: 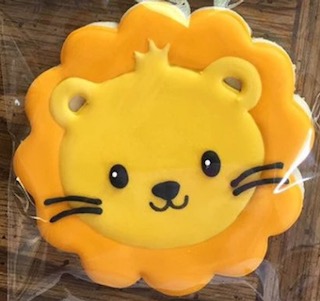 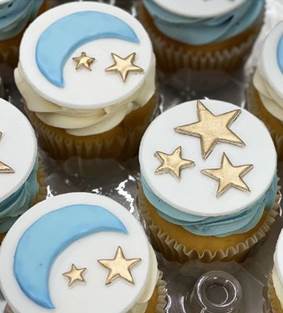 i was internally freaking out at the idea of doing 500 cookies all at once, since the biggest order i've ever worked on is probably more like 10-12 dozen.  i mean, we're talking about FORTY-PLUS dozen cookies here.  and add to that the fact that these were definitely for disneyland - because they used their official work e-mail address to respond to me.  like...WUT.

and even more amazing?  I GOT THE GIG.  the cookies were going to be given to cast members to commemorate the new lion king stage show that was premiering in the fantasyland theater, as well as the re-release of fantasmic!, which hadn't returned since the parks reopened after the covid shutdown.  because of licensing issues, they couldn't use actual disney graphics and that's why the designs they sent me are so generic-looking.  i was SO excited.

but what i haven't mentioned yet is the fact that the delivery day happened to fall on the day after the bean's junior high graduation - which meant that i was going to be working like crazy that entire week.  a week where there was some sort of school-related event or function almost every day.  holy crap.

but as i studied the photos a little more i realized that i could work on this order in stages, spreading out all of the prep work over the next few days so that everything would be ready and i could just concentrate on decorating the cookies in one sitting.  breaking it all out into little bite-sized pieces of work would make this daunting task a little less overwhelming, and i started making lists and creating a schedule of how it was all going to go.

between smart & final, costco and my local baking supply shop, i gathered up the supplies.  i've never had these quantities of cookie ingredients in the kitchen all at once before: 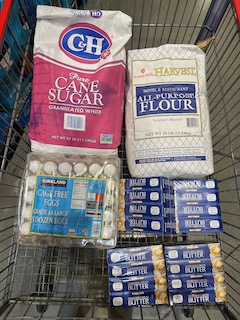 the next step was to mix all the dough, wrap it tightly and store it in the fridge.  this isn't even all of it! 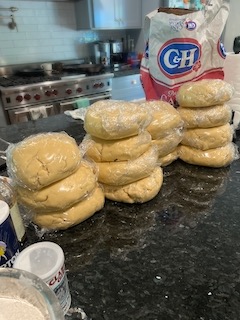 on another day, i made a batch of royal icing - something i don't typically enjoy using because i don't think it tastes all that great nor do i love how rock hard it dries on the cookies.  but in this case, i was going to pipe out all of the lion heads onto parchment paper that would be completely dry so that all i had to do was peel them off and plop them onto the freshly frosted cookie.  kind of like making a sticker, see?

i guess they kind of looked more like winnie the pooh before i added the little crowns. 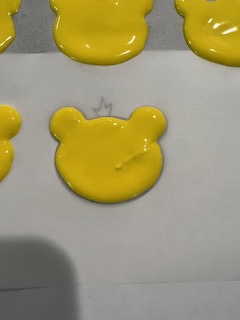 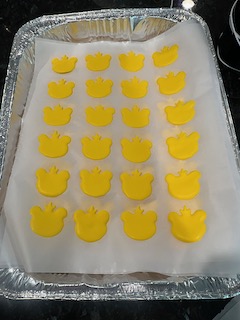 for the cookies with the moon and stars, they wanted the background to be a dark blue with a white moon and gold stars.  i decided that the easiest way to handle that was to make the moons and stars out of fondant.  on my first try, i rolled out a chunk of fondant and used my airbrush to paint it with a shimmery gold: 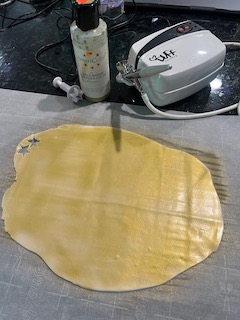 but that was a bust, because the "paint" made the fondant too sticky to cut out without ruining the shapes.  boo.  and so instead, i rolled out another ball, cut the stars out and then hit them with the airbrush.  luckily, this time they turned out as i'd pictured. 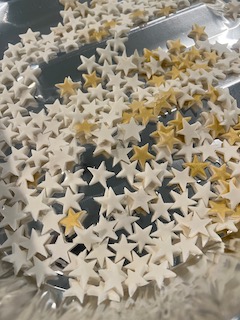 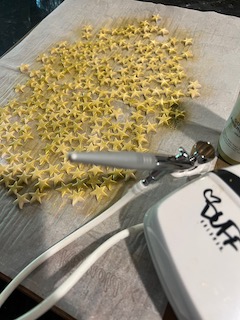 because it was graduation season, i had other orders to work on.  and so while i was rolling, cutting and baking for those orders i sucked it up and baked those cookies too.  i was pretty amazed that my calculations for how much dough to make actually came out almost exactly right.  i ended up with zero leftovers even after throwing in a handful of extras to account for possible errors or breakage.  woohoo! 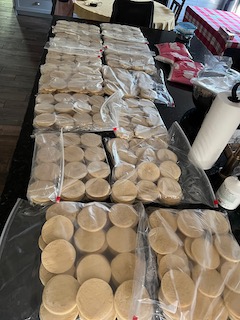 thank goodness for the extra freezer we have in the garage, because the one in the house definitely wasn't big enough to hold all those bags of cookies.  in they went for a few days, until it was time to start decorating.  first thing that morning, i pulled them back out and mixed up the frosting while they defrosted. 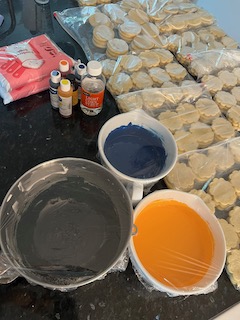 once i had all of the components ready to go, i started with the first one.  and while it wasn't as perfect looking as the example they'd sent me, i think it came out pretty well: 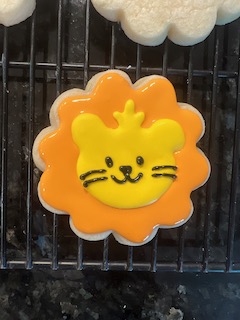 twenty dozen lion heads later, i switched gears and got the moons and stars out and ready for action. 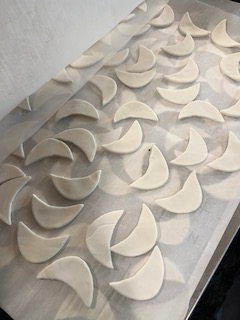 as i started assembling them, the hub and the bean both came over to see how things were going and commented that they rather looked like smiley faces.  and i hated to admit it, but they were right.  UGH.  the bean came to my rescue, though. after looking over my supply of sprinkles, she picked out some small gold dragees and added a few to each cookie.  of course, since she's an artist, it was exactly what they needed to look right. 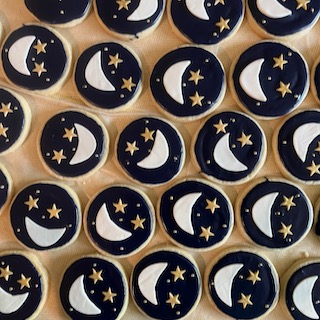 the hub came in as i was just about done and snapped some photos of the action, all the while commenting on how crazy it was to see cookies covering almost every surface in the kitchen and dining room. 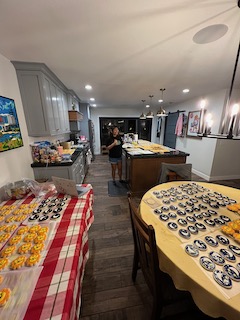 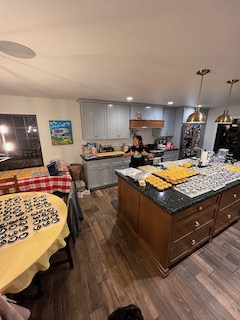 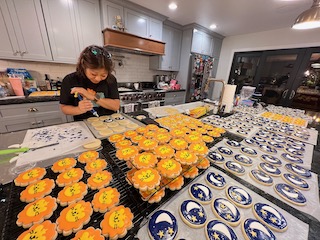 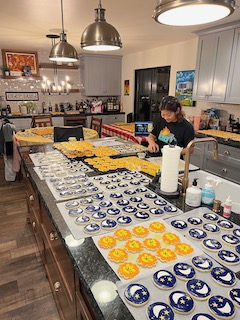 they dried overnight, and then after the bean's final awards ceremony at school i managed to squeeze in time to cut the ribbons and get every last one of those cookies bagged up and packed for delivery.  there were no less than five of these boxes, all filled to the brim with cookies. 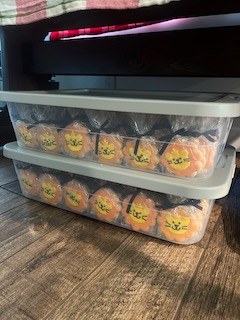 i was so relieved once it was all over, and delivering them to disneyland the next day went smoothly.  i did get some feedback from my contact there that the cast members said that the cookies were cute and tasty, which is always good.  and of course, despite the fact that it was probably the most stressed i've been in a long time, i made sure to let them know that i would be happy to take orders again in the future if they found themselves in a similar situation.
it's been awhile now since that all went down, but it still amazes me that I MADE COOKIES FOR DISNEYLAND.  I DID THAT.
woohoo!  there's a bucket list item checked off that i didn't know existed.
at July 13, 2022