the last time i did a guided tour at disneyland, it was my 33rd birthday and it was the only way that we could set foot inside club 33.  i remember it being pretty interesting, and included lunch and a tour-exclusive pin.

and so when my friend mae hit me up to do some mickey-themed halloween cookies for her and suggested that we meet up at disneyland for delivery AND book one of the tours that had just been announced, i was all in.  the old lady happened to have a day off from work that day as well, and so we made our reservations and got excited for a fun afternoon at the land.

the cookies were simple but still cute, or at least i thought so.

we headed over to the meetup spot for guided tours, just inside the gate and before you head on down main street towards the castle. 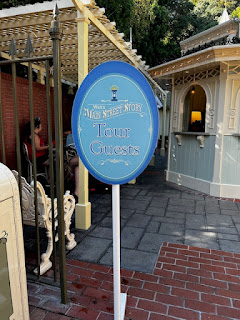 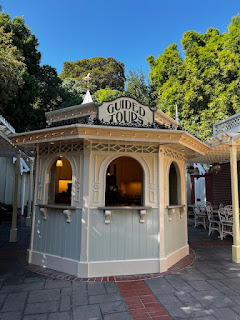 we checked in at the kiosk and were given our tour credential on a lanyard, plus a headset and mobile device for listening to the tour guide as we walked along. 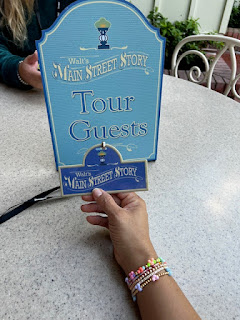 after our tour guide dianna introduced herself, she took us over to the flagpole and told us a quick story about disneyland's opening day in 1955. 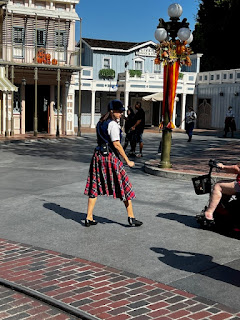 we wandered up and down main street, stopping to listen to her stories and trivia about the names you see on the shop windows and pointing out that tilly, the "ticket taker" at main street cinema wore a name tag that identified her hometown as marceline, missouri - which is where walt disney is from as well. 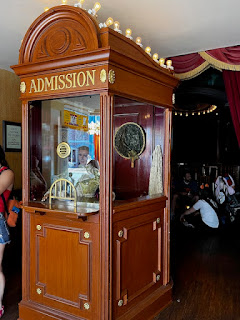 if you look at the top of this building, you'll see the last remaining piece of what used to be the sunkist citrus house.  back in the day, there was a machine inside that the cast members would use to make fresh squeezed orange juice. 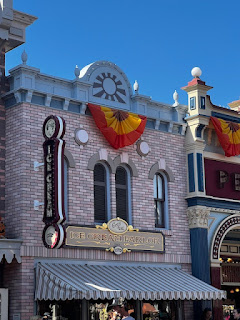 about a half hour into our tour, we found ourselves standing outside the disneyland fire department, getting ready to step "backstage" and head upstairs for the highlight of the tour.  this is the only way to get into the apartment that was used by walt disney and his family in the very early days of disneyland, which is typically on any disney nerd's bucket list.  it definitely was on ours, which i'm sure isn't much of a surprise.

if you look up above the fire dept. sign, you'll see a window with a lamp that's always lit, to symbolize walt's everlasting presence in his park.  during his lifetime he would turn the lamp on when he was in the park, and that was how cast members and guests knew he was there somewhere. 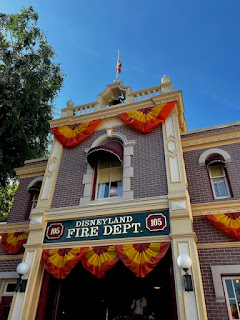 and from the moment we went through the door that took us backstage, we weren't allowed to take pictures or video.  can't ruin the magic, after all.  duh.

we went up a flight of stairs and through the front door, and then we were inside the tiny apartment.  there was a living room with two couches that opened up into beds for walt and lillian, with several photographs of them and their family on the walls.  there was a small kitchenette where walt would make himself grilled cheese sandwiches and coffee, and a little bathroom with a full shower.  and as we all walked through the small space in awe, a park photographer appeared to take the only photo that was permitted.  here's ours - you can see the window with the lamp visible from the ground to our right: 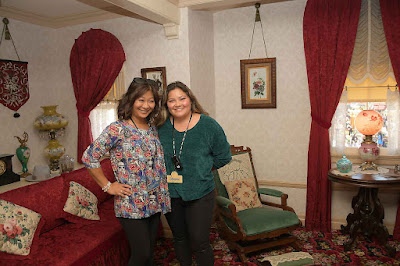 with a full thirty minutes left of our tour, we exited through a back door and found ourselves on a lovely little outdoor patio that i never knew existed.  the disneys would come out here to hang out and listen to the merriment down below, unseen by park guests.  we were given this giant cookie and a soda, and then it was about half an hour of awkward conversation with our guide and the others on the tour. 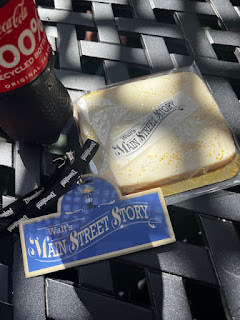 when we got back downstairs, i looked up and caught a glimpse of the patio we had just been sitting at, just above city hall and to the left. 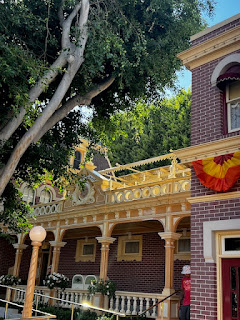 we took a few more pictures, just for fun: 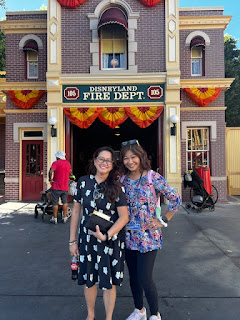 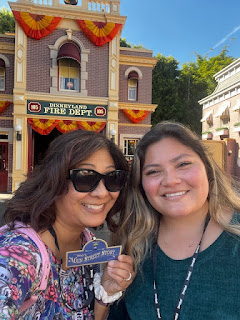 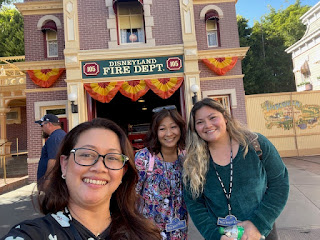 would i recommend this tour?  i hate to say it, but probably not - unless visiting walt's apartment is on your bucket list.  there really wasn't much to the tour aside from that, and we left feeling disappointed at the lack of actual content.  i'm not sure what we were expecting, but that wasn't it.  and the cookie and bottle of soda at the end was pretty sad. and the stories that were told were just fluff...it felt like the guide was just trying to kill time until it was time to head upstairs.

the bean and i had booked the holiday tour, which is the only other one currently available.  i stopped to ask at the kiosk if it would be much different from the one we'd just taken, although i wasn't expecting anything but enthusiasm from the cast member i spoke to.  she assured us that it would be a blast, and i figure only time will tell.  in any case, it was nice to spend some time with mae and the old lady and the visit inside the apartment was really cool.

if you do/have done the tour, let me know if you agree with me!  i'd be interested in hearing your feedback.