soooo...remember a couple of weeks ago, when i enlisted your help in voting for my spring top in that contest? well, it kind of turned into an interesting clusterfuck.

voting was to go from saturday through monday evening at 8pm - hence my uncharacteristic saturday morning post, whoring for votes. and then i figured i'd rally for votes via twitter, facebook, and my favorite boards on the nest on monday - which likely irritated some folks, but oh well. i was getting my ass beat big-time, but as i continued to harangue for votes, the margin shrank and by about 7:15 that evening, i was only behind by a handful of votes. later on, just before 8, one of my twitter friends (twirlies, we call each other) alerted me with an excited tweet: "you're 20 votes ahead, yay!" yay, indeed!

but not so much. it turned out that the poll was supposed to have shut down an hour earlier - since rae is in a different time zone. somehow, the poll stayed open later than she'd expected. at 8 her time, she checked the results, determined the winner (at that point, not me), and wrote her blog post with the announcement, scheduled to post the next morning. d-oh! when she went back and glanced at it again, she was pretty alarmed to realize that voting had not ended as she'd thought, and even worse, there was a new winner - me. uh-oh.

being a busy mom, she was pretty wiped out by that time. she shut the poll down, removed the widget from the blog, wrote up a quickie post right off the top of her head, and e-mailed me a very apologetic note to let me know what had happened. i was pretty bummed to find out that i hadn't won - and not even because i wanted the prizes, but because i am a stereotypical only child who likes to win at everything. heh.

the next morning, i went back to her blog to check out the announcement and noticed a handful of comments on the post she'd written about the snafu. as i read them, i got more and more irritated - folks were damn near calling me a cheater for using twitter (et al) to get votes. um, hello - the rules clearly stated that we were allowed to promote ourselves and rally for votes. i was pissed and fired off a response of my own, and called it a day.

i got another e-mail from poor rae, who got stuck having to write an update to the original post to clarify all that had happened. how silly, right? anyway, she was apologetic again and asked for my address to send me a consolation prize. i thought it was sweet of her to offer, told her that it wasn't really necessary...but sent my address anyway. ha!

and on friday, i picked up the mail and found this waiting for me: 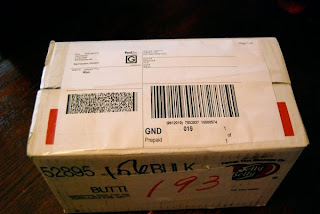 to be honest, i'd forgotten about the whole debacle by then and was pretty confused as to why i was getting a package in a jelly belly box from san francisco. heh. i tell you, i'm getting old - i'm forgetting shit all the time these days.

i cut open the top of the box and totally grinned as i read the note inside: 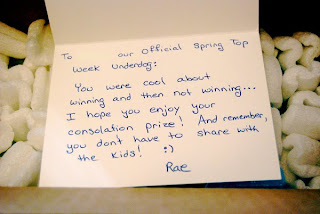 underneath the styrofoam peanuts was this: 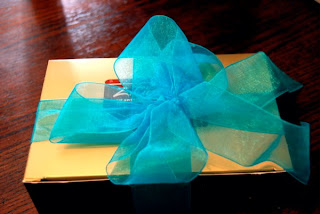 and after whipping that pretty blue bow off, i found this: 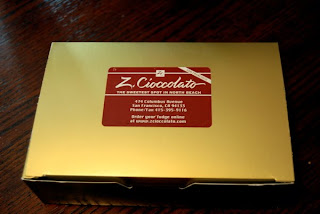 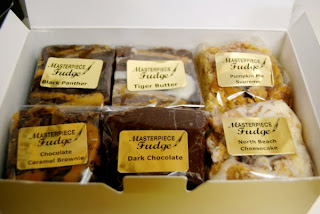 mmm, fudge. i fired off a "thank you" email to rae, and thus far have resisted the tug of that fudge, but i'm thinking i'll have to bite into that chocolate caramel brownie square later today.
and now, for my own giveaway! here are the four winners: 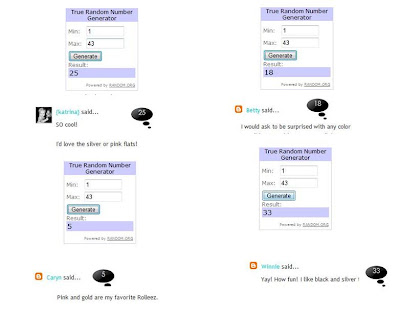 can you all see that? working with "paint"on this computer kind of sucks, but that's the way it goes. anyway, for my four winners - katrina, betty, caryn, and winnie - i'll be emailing you later today to get your addresses!
yay for fun prizes!
rambled on and on by wan at 7:57 AM