this weekend, this e-mail popped up in my inbox:

it's been two years since i discovered my most favorite workout ever!  crazy.  i've also now been running for FOUR years.  i can hardly believe it.  i've never stuck with any kind of exercise for so long before.  and on saturday, those two worlds collided when one of my most favorite barre instructors joined me for a super fun 5K at the fairplex - the bubble run. 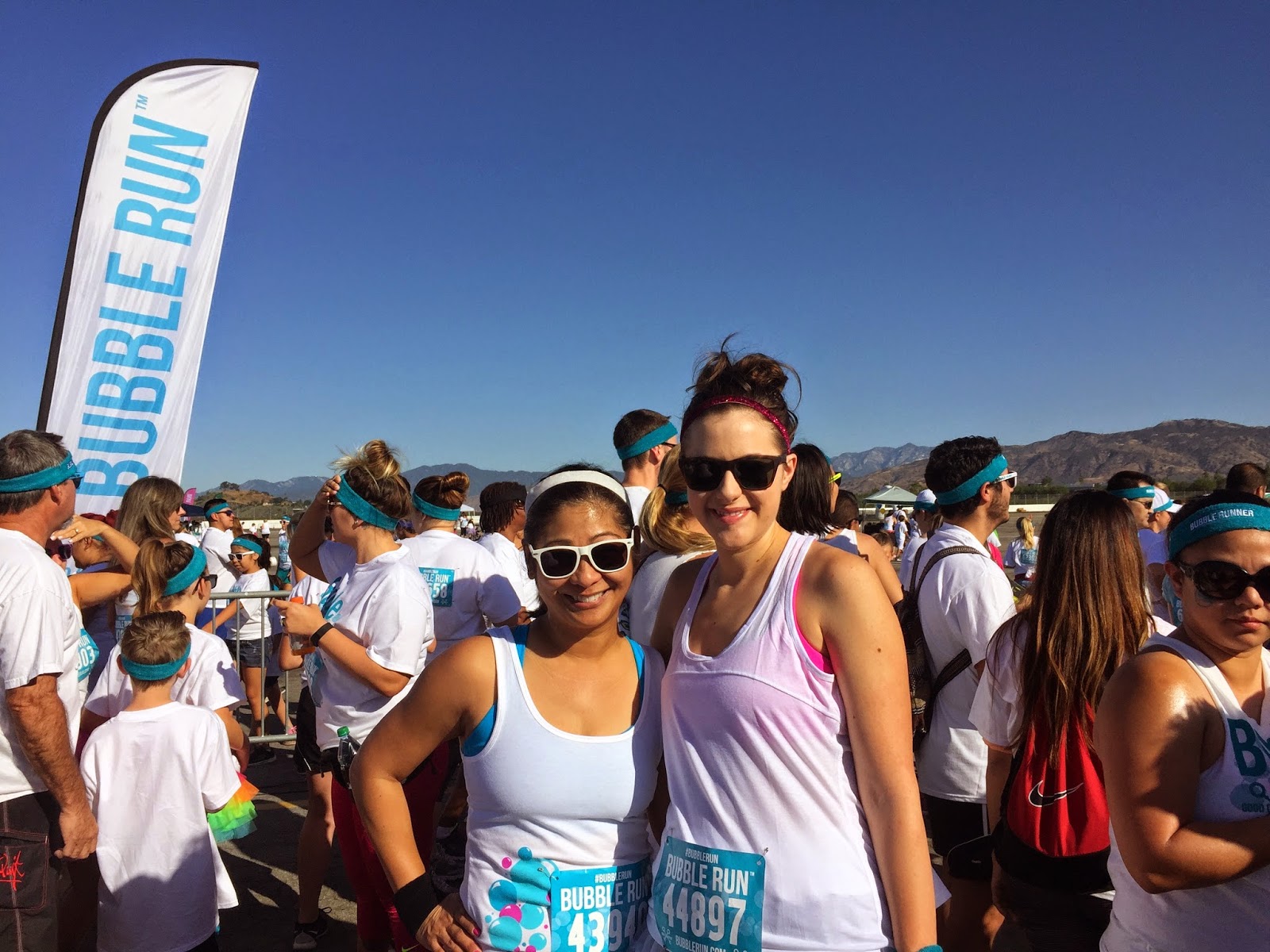 their facebook page had warned us to arrive early in order to have enough time to find parking and make our way to the start by 9:00, when the first wave would be released.  so we were there a solid 45 minutes early, and of course, it was already horribly warm.  standing there in the sun was not our most favorite thing to do, but it was fun to chat outside of the studio and watch the shenanigans happening around us.  and amazingly enough, out of all of the people that were there, we managed to find a spot right next to a troop of girl scouts that i knew.  they were having a blast with the giant beach balls that were being volleyed throughout the crowd. 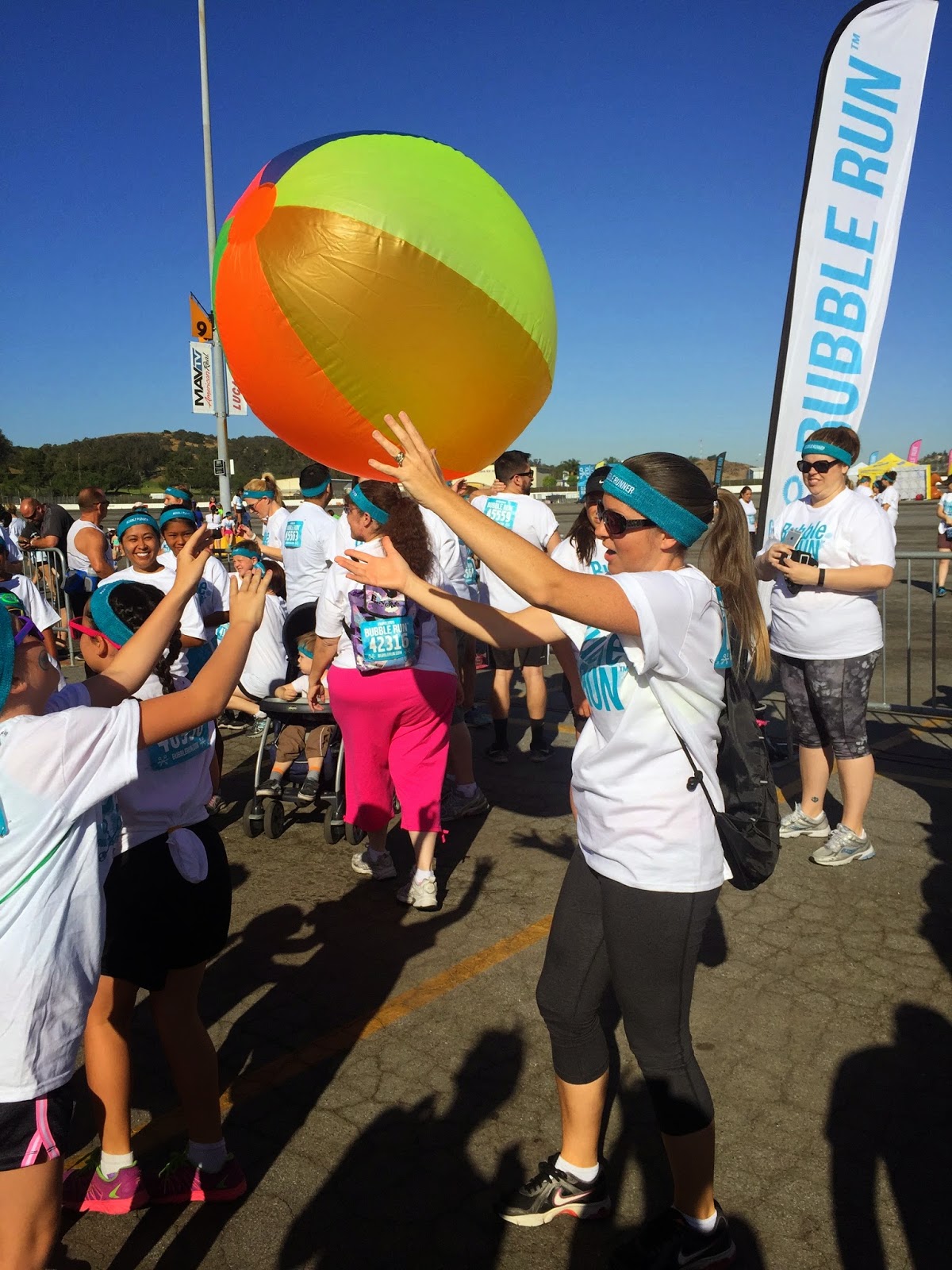 finally, it was time to start.  we ended up in the second wave, which wasn't bad considering the number of people that was in front of (and behind) us.  the bubble cannons at the start line were running on full power, and we were covered almost from head to toe as we finally got going. 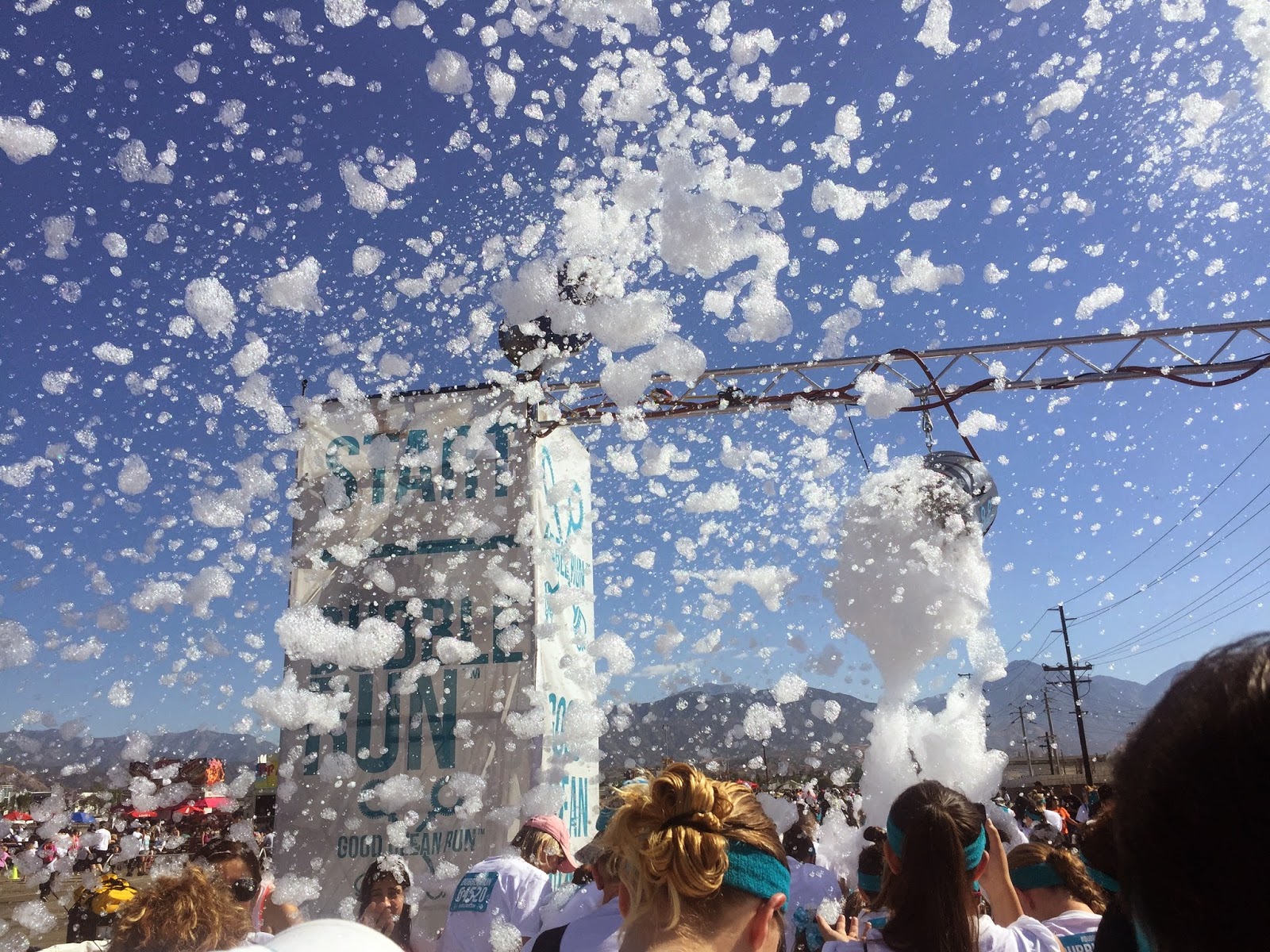 since we'd gotten cooled off a little by all those bubbles, we were able to start off at an easy jogging pace.  we wove around and through the crowd, most of which was walking in walls at least 4-5 deep. and then we reached the first of four colored bubble "bogs" - this one was a happy, cheerful pink. 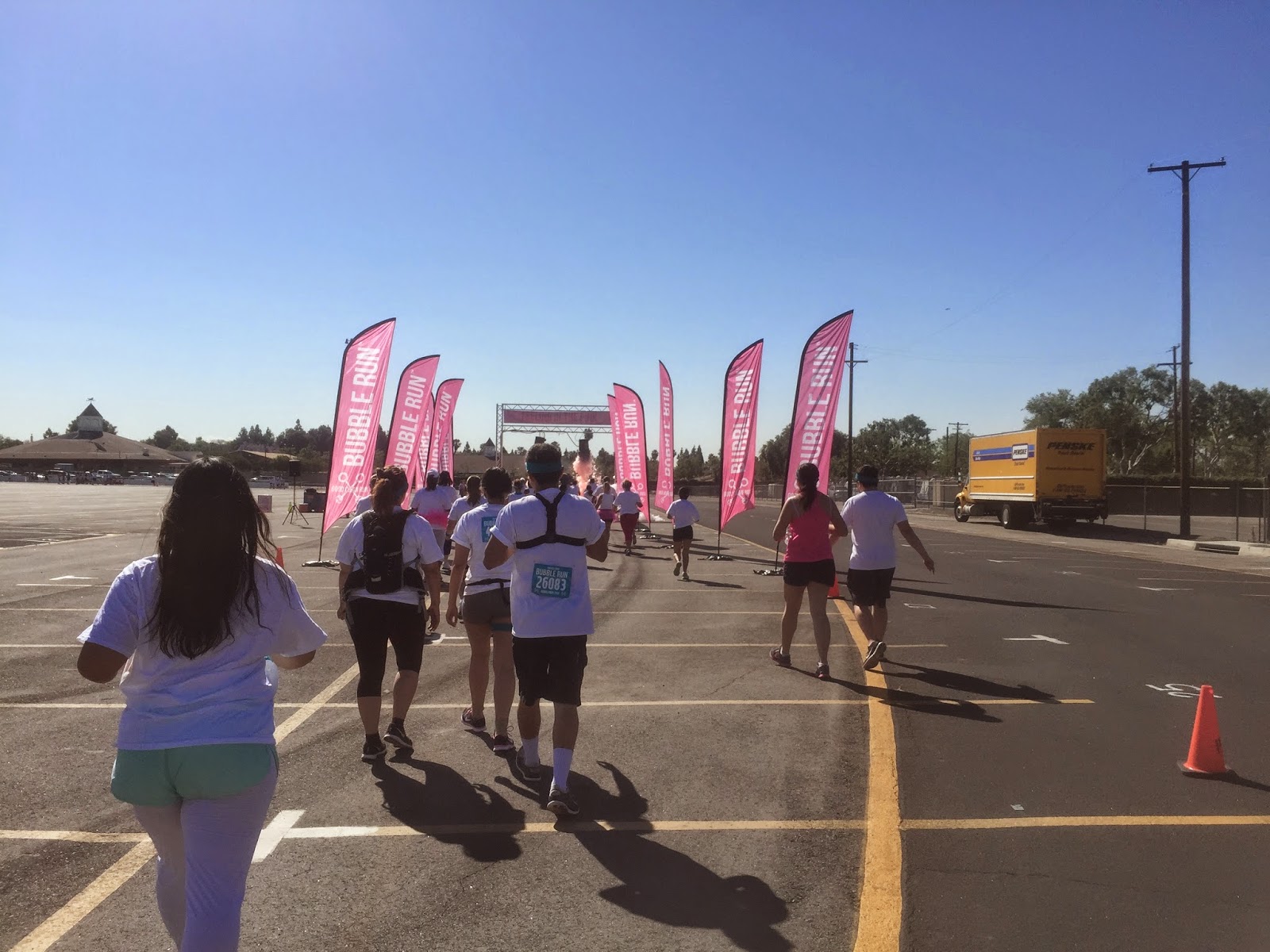 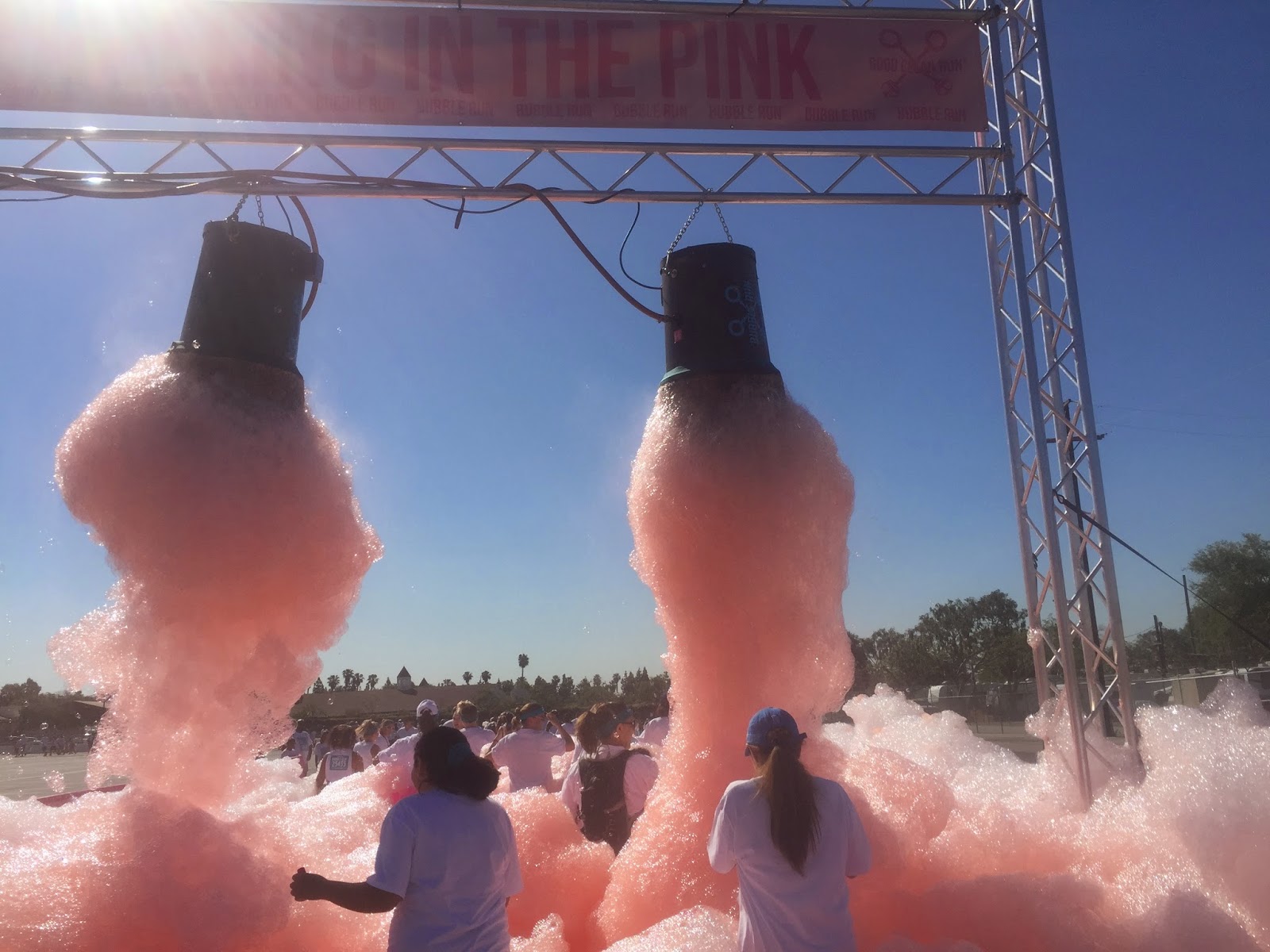 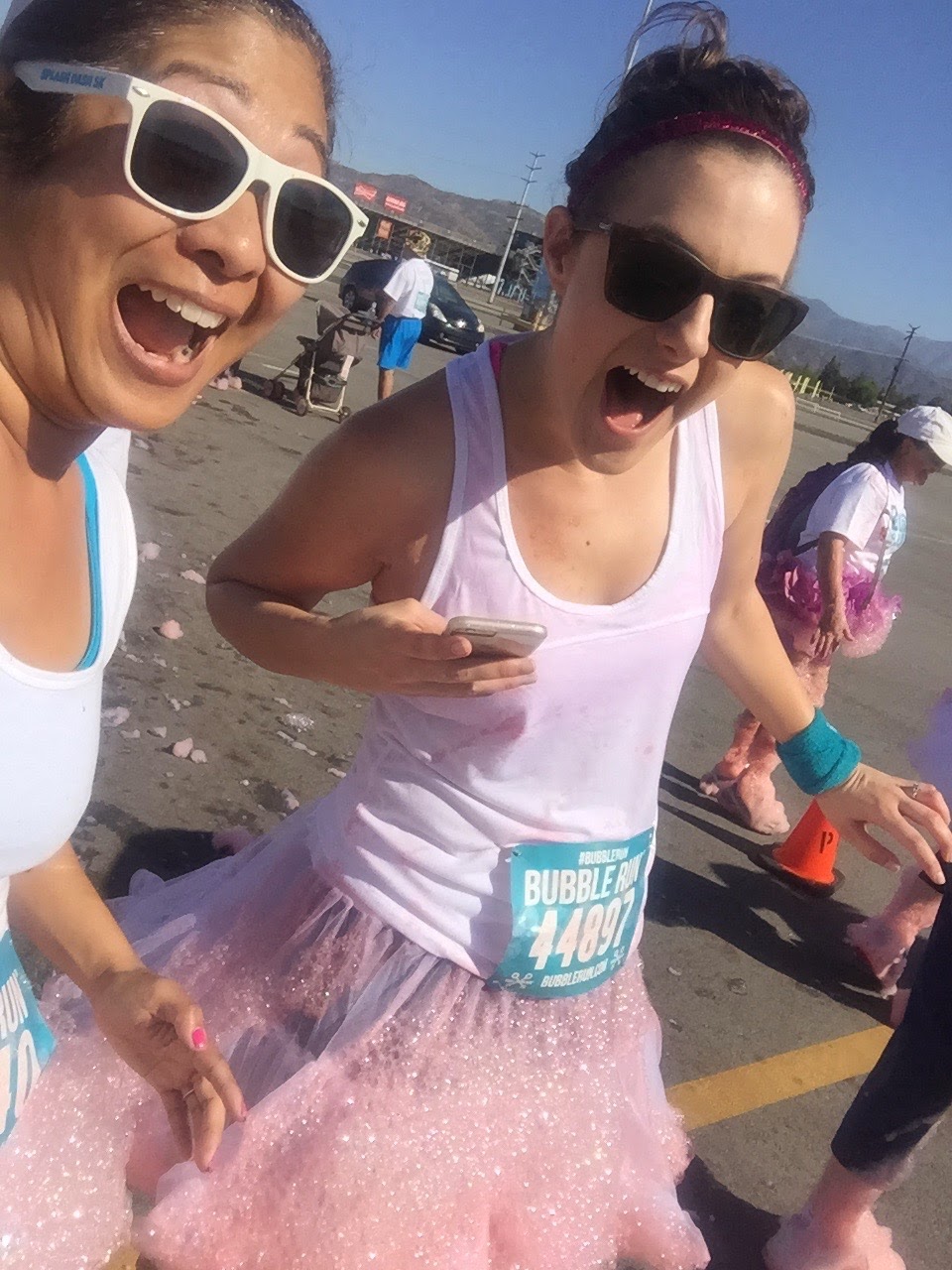 i have to admit, it was really fun running through those mounds of bubbles. 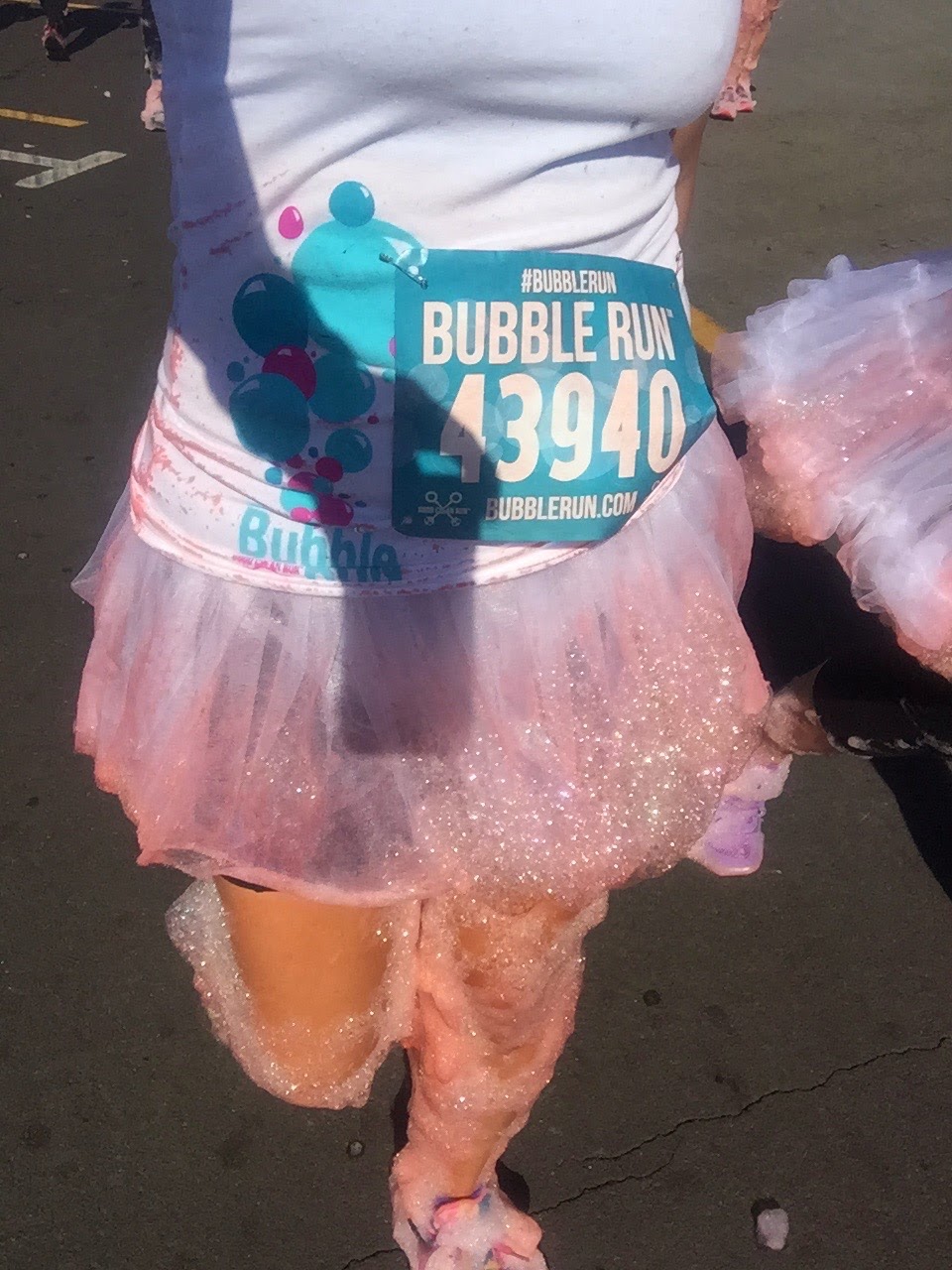 the temperature had only gone up and up and up, and with the crowds we were trying to get through and the uncomfortable heat, we gave up on running altogether and settled on a nice fast walking pace.  i hadn't even bothered to turn my nike + timing app on, and had to just mentally let it go.  whatever, it was fun to relax and giggle our way through it anyway. 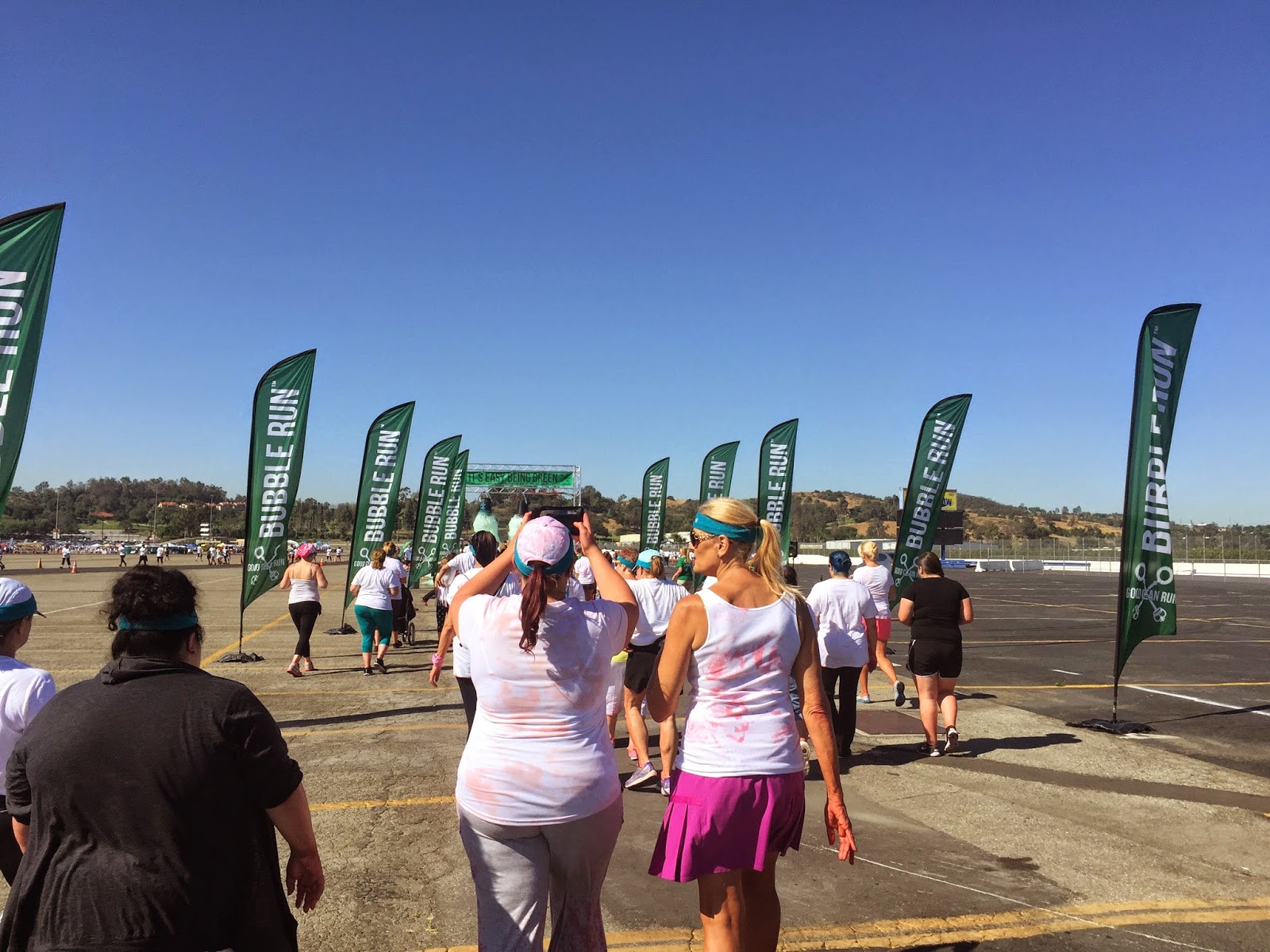 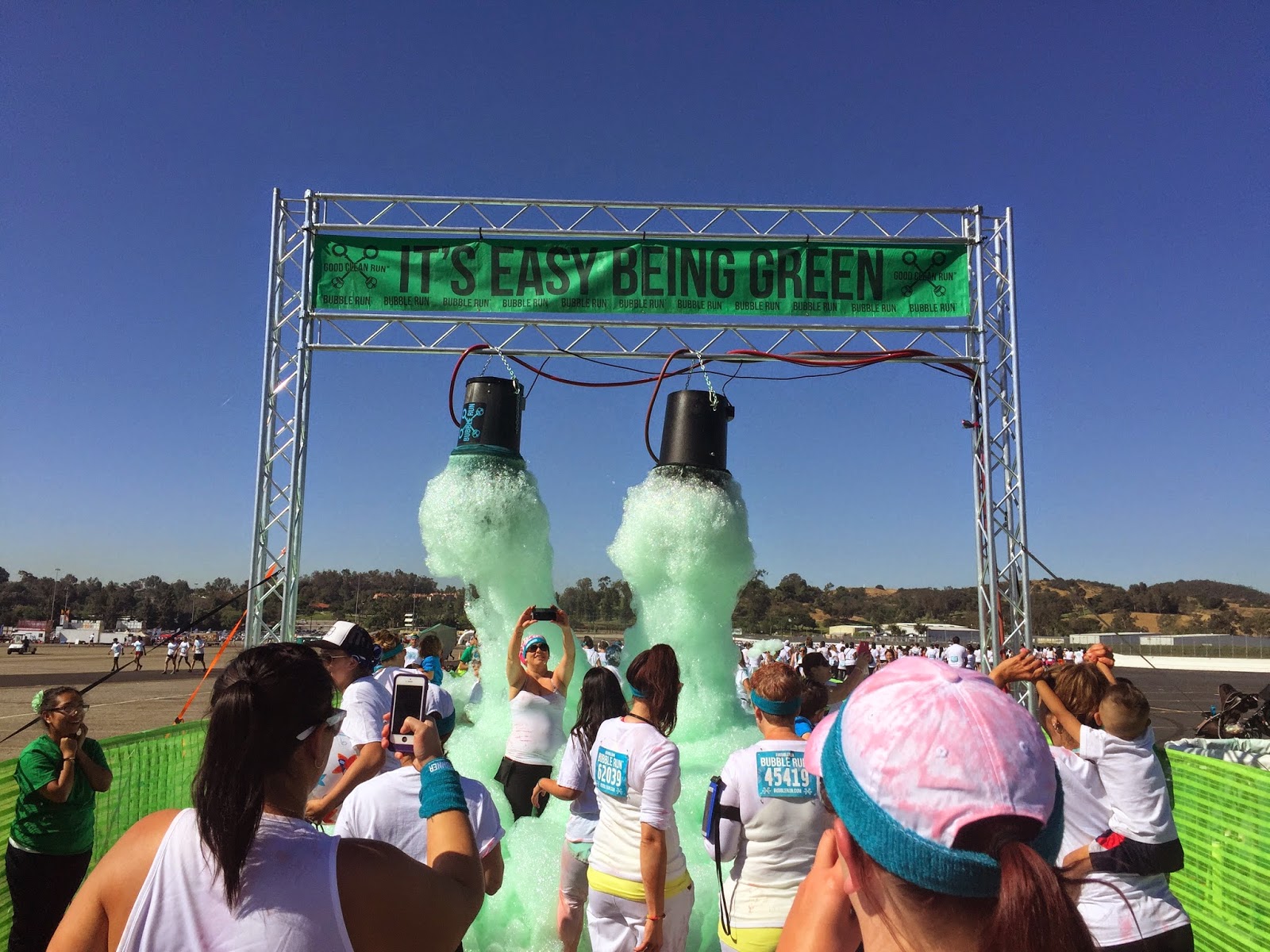 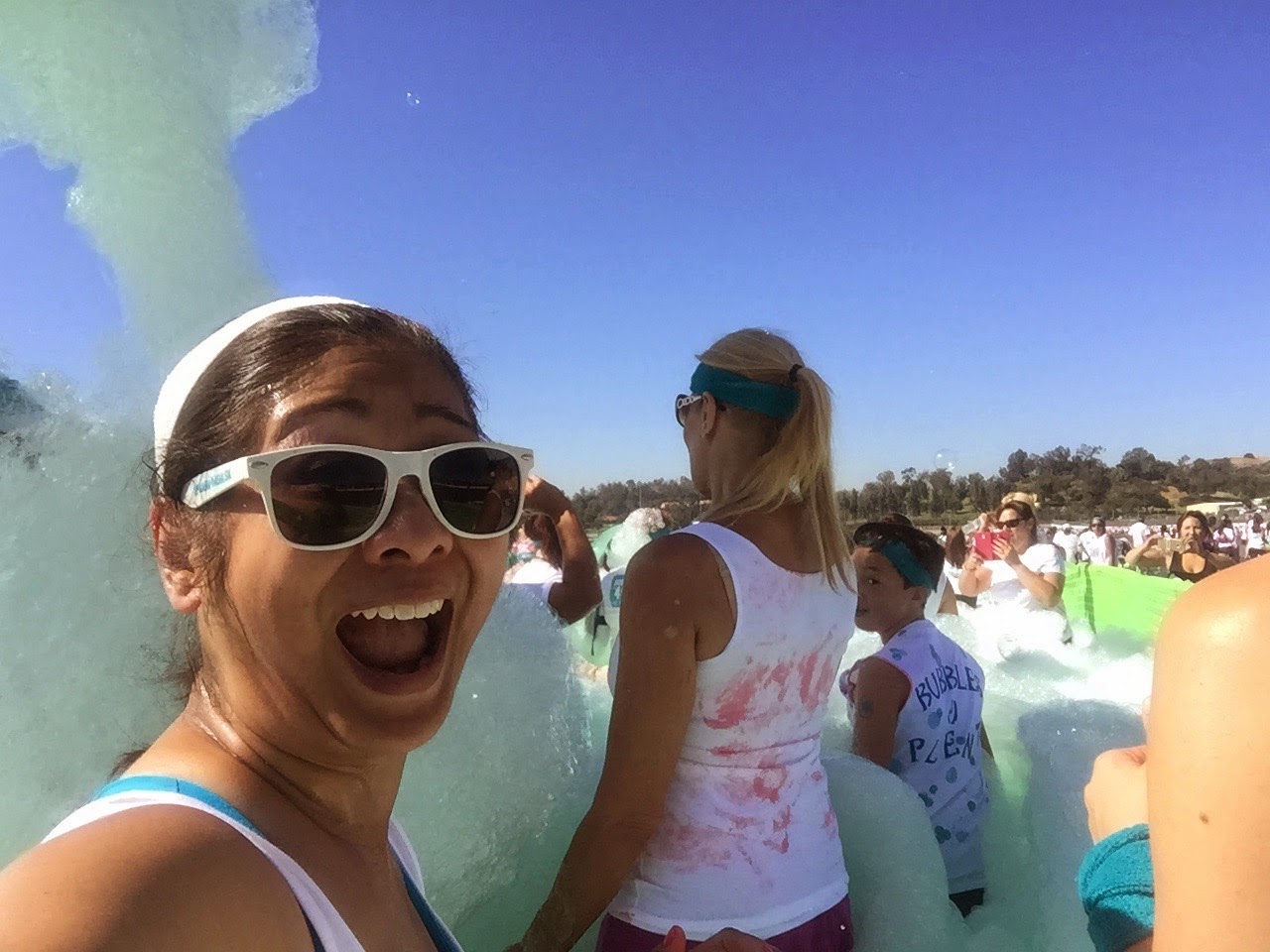 then blue, and finally yellow. 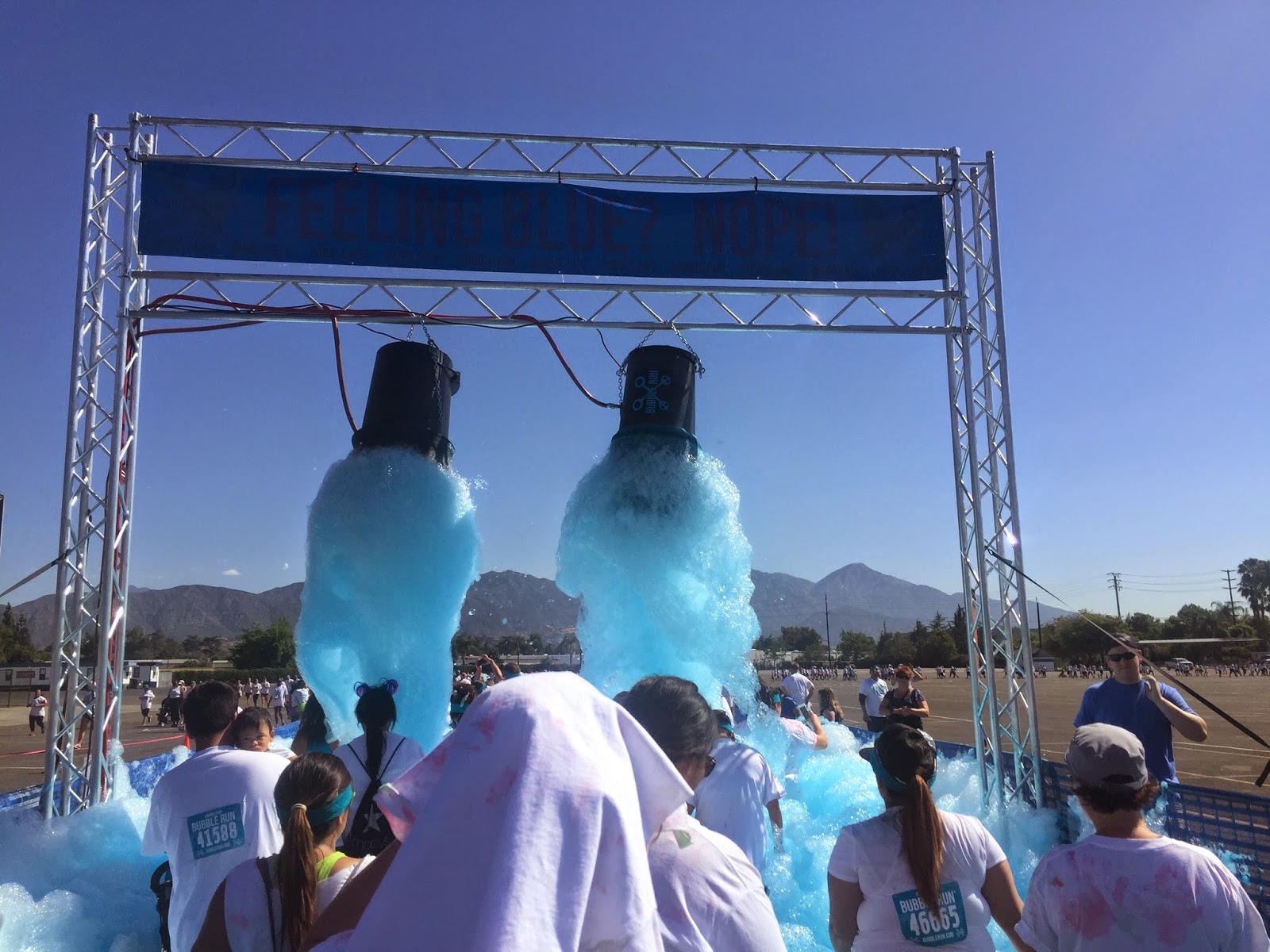 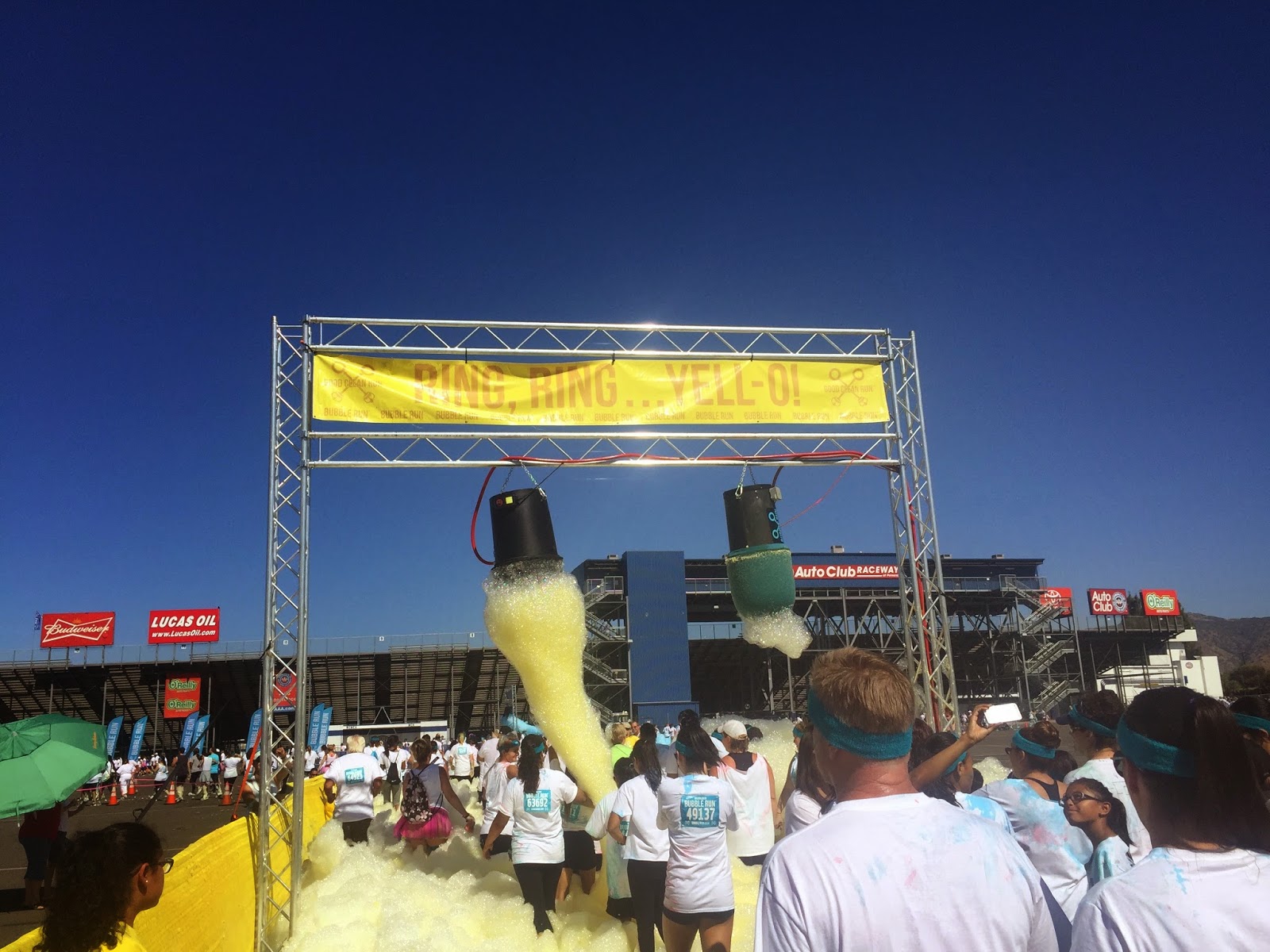 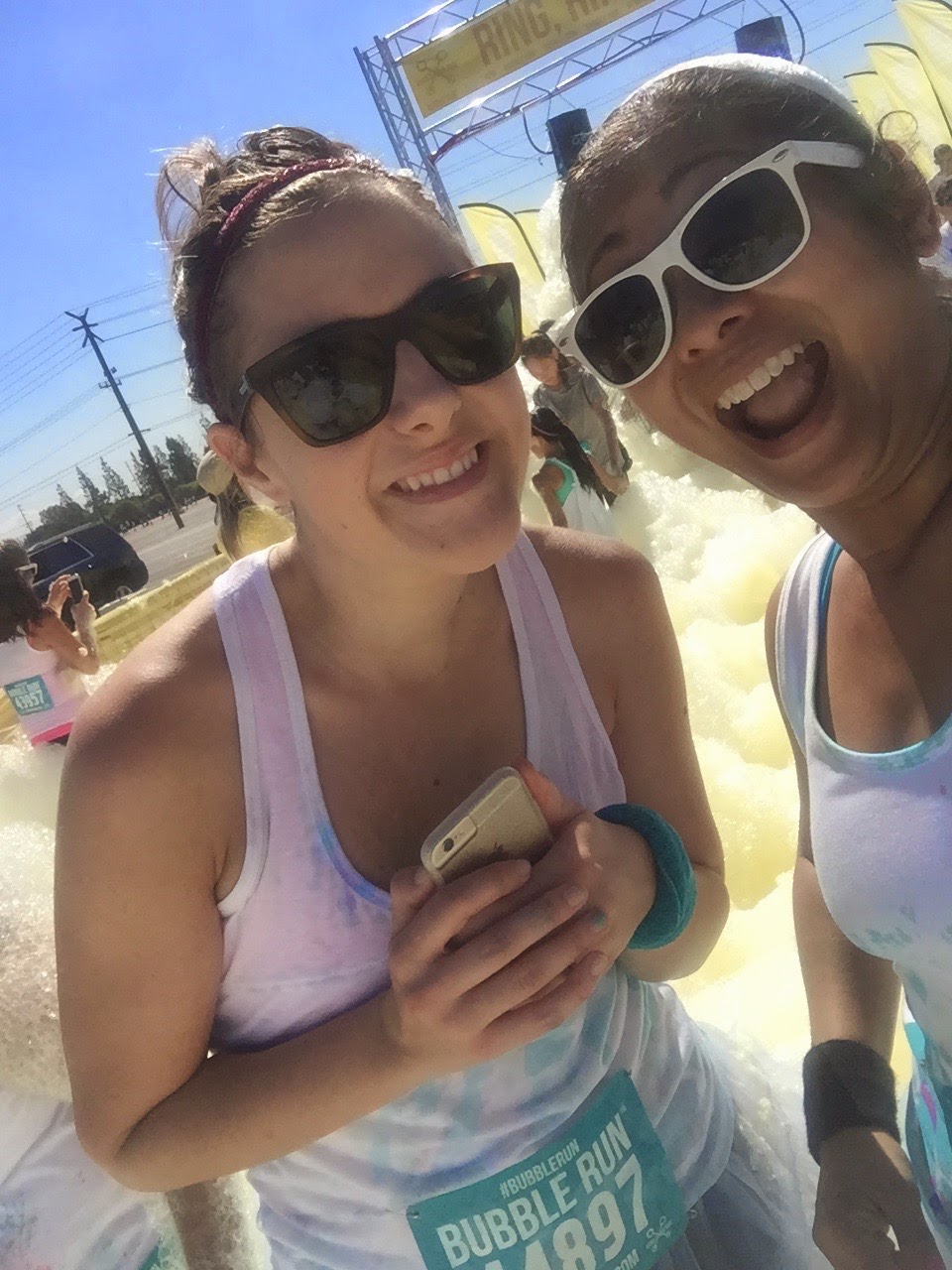 and then we were done! 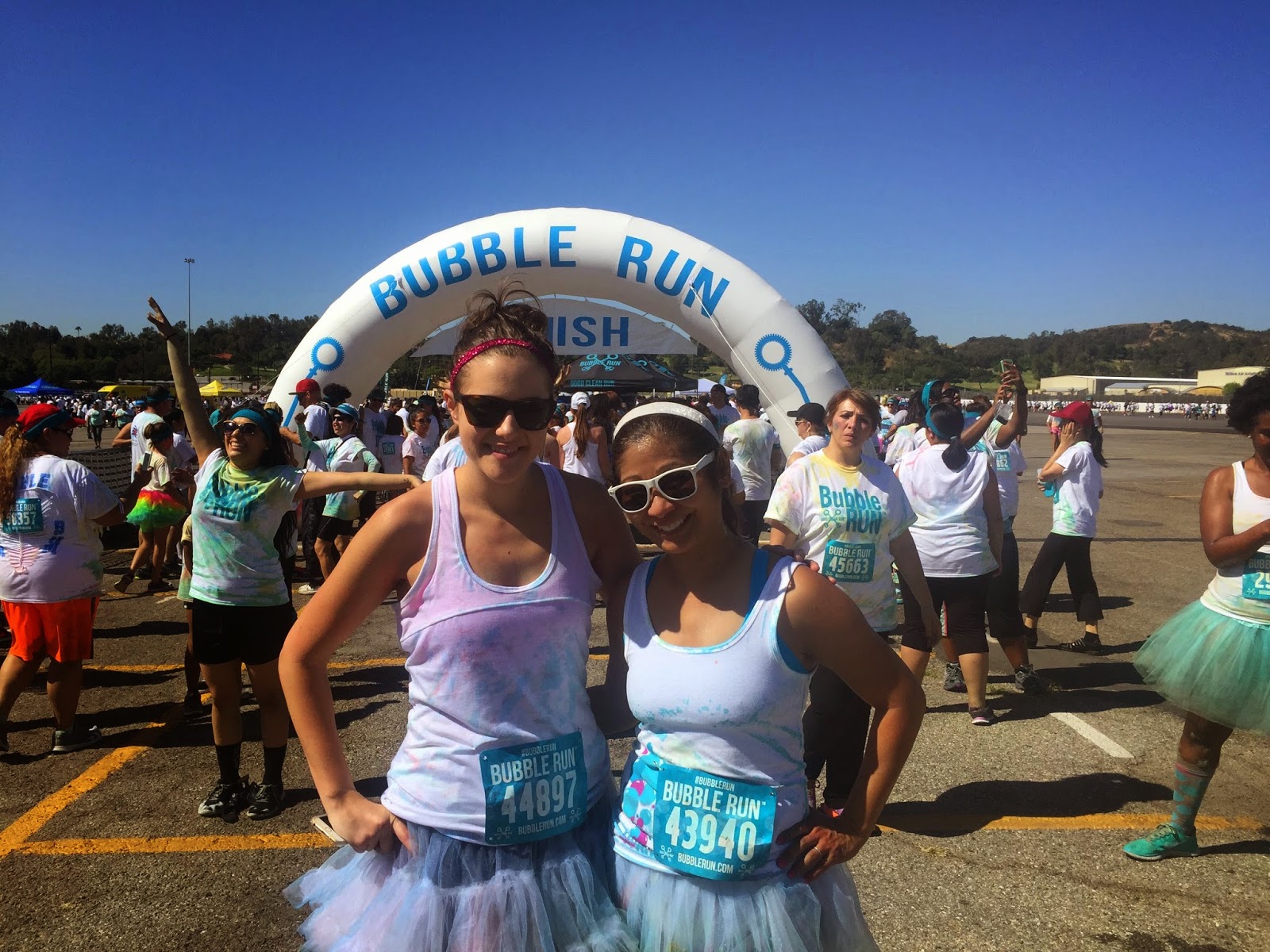 and somehow, one of my old friends from my junior league days managed to find me at the finish.  we're always at the same races, figuring it out from each other's facebook pages, and almost never see each other.  it was nice to see her and her family. 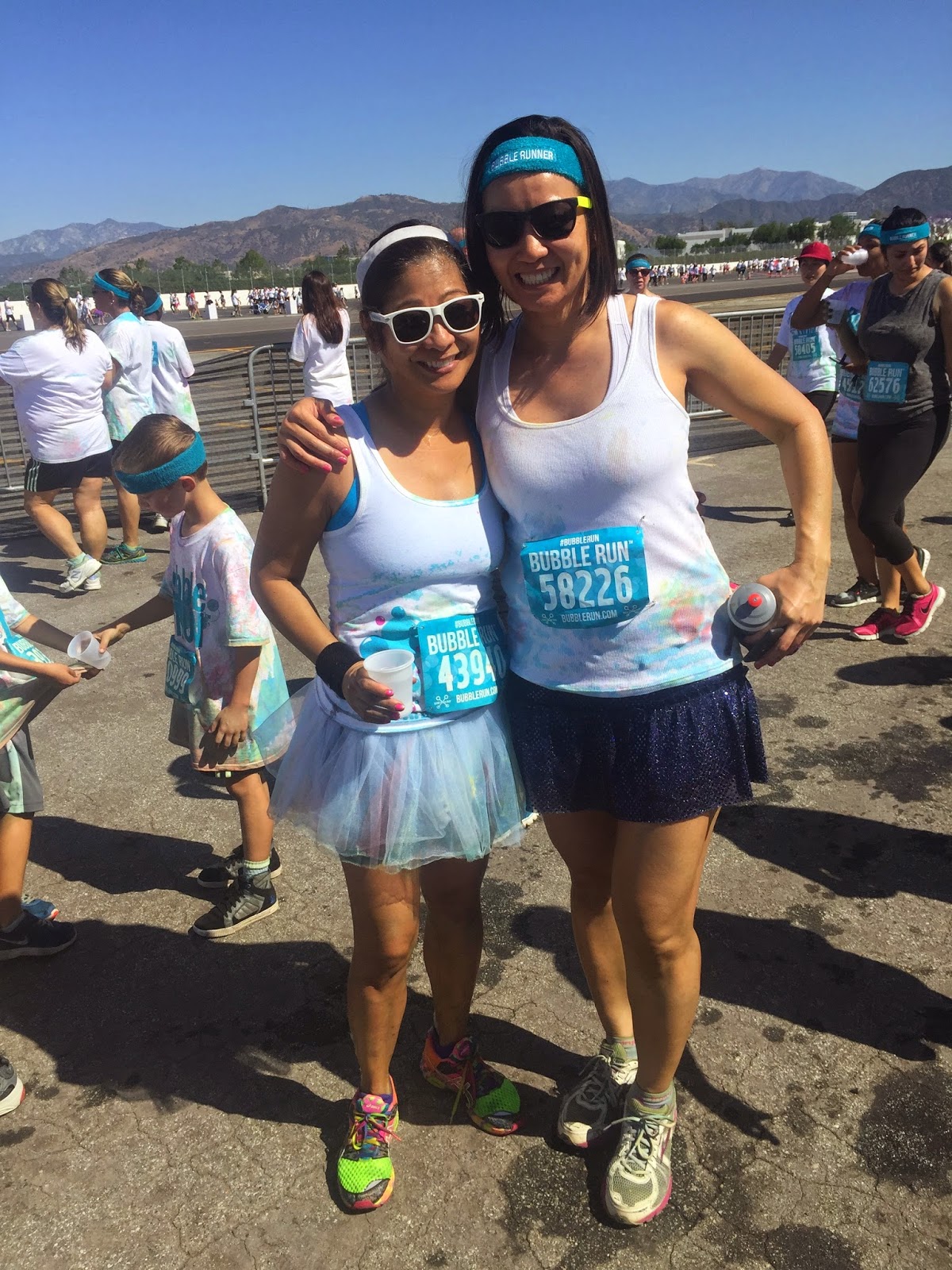 as we headed back towards the car, we were astonished at how many people were still waiting to be released at the start.  the announcer had said there were 13,000 folks there, but we'd ASSumed that he was just exaggerating.  nope: 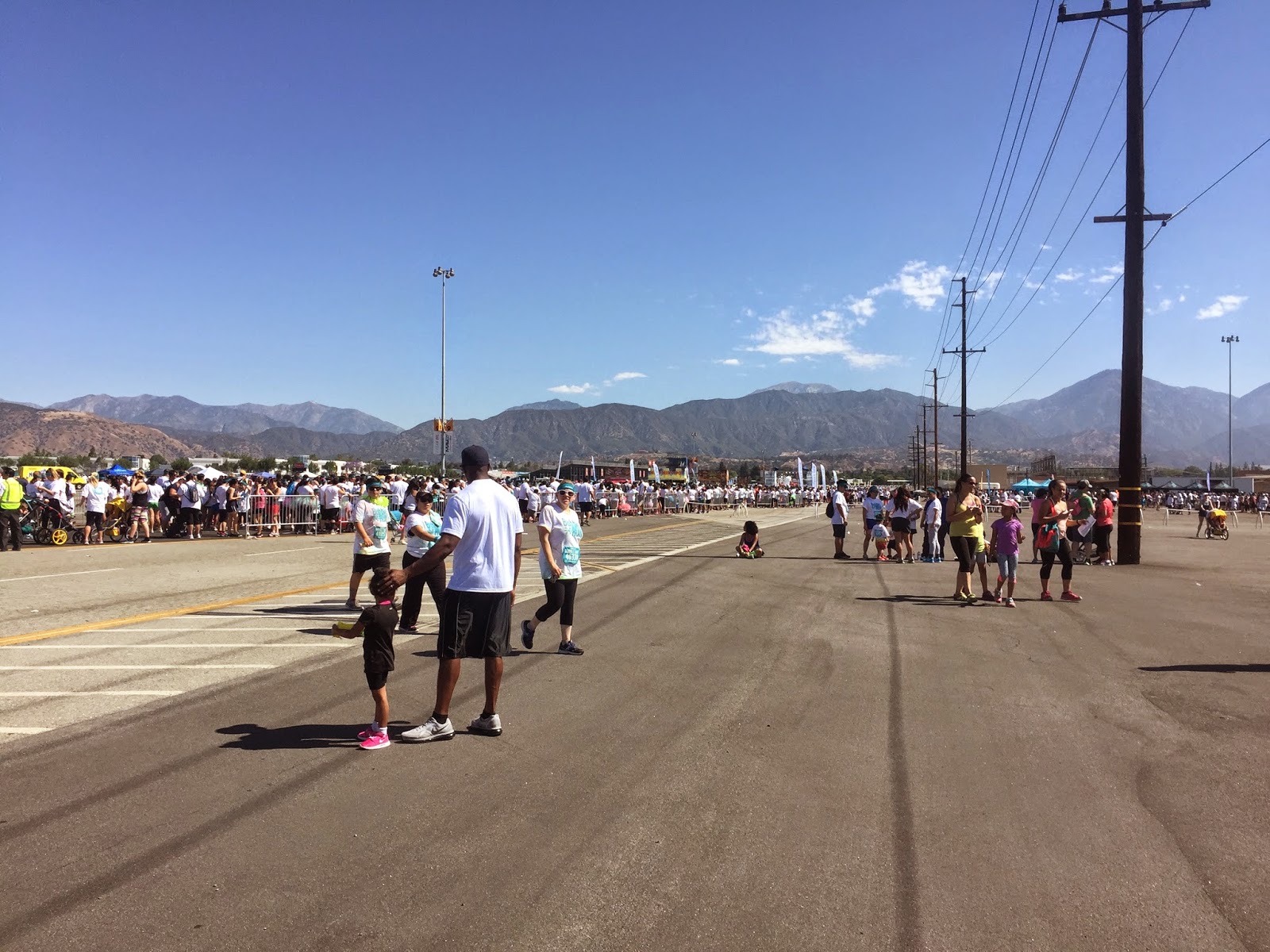 even longer was the line for registration and same-day packet pick-up.  WUT. 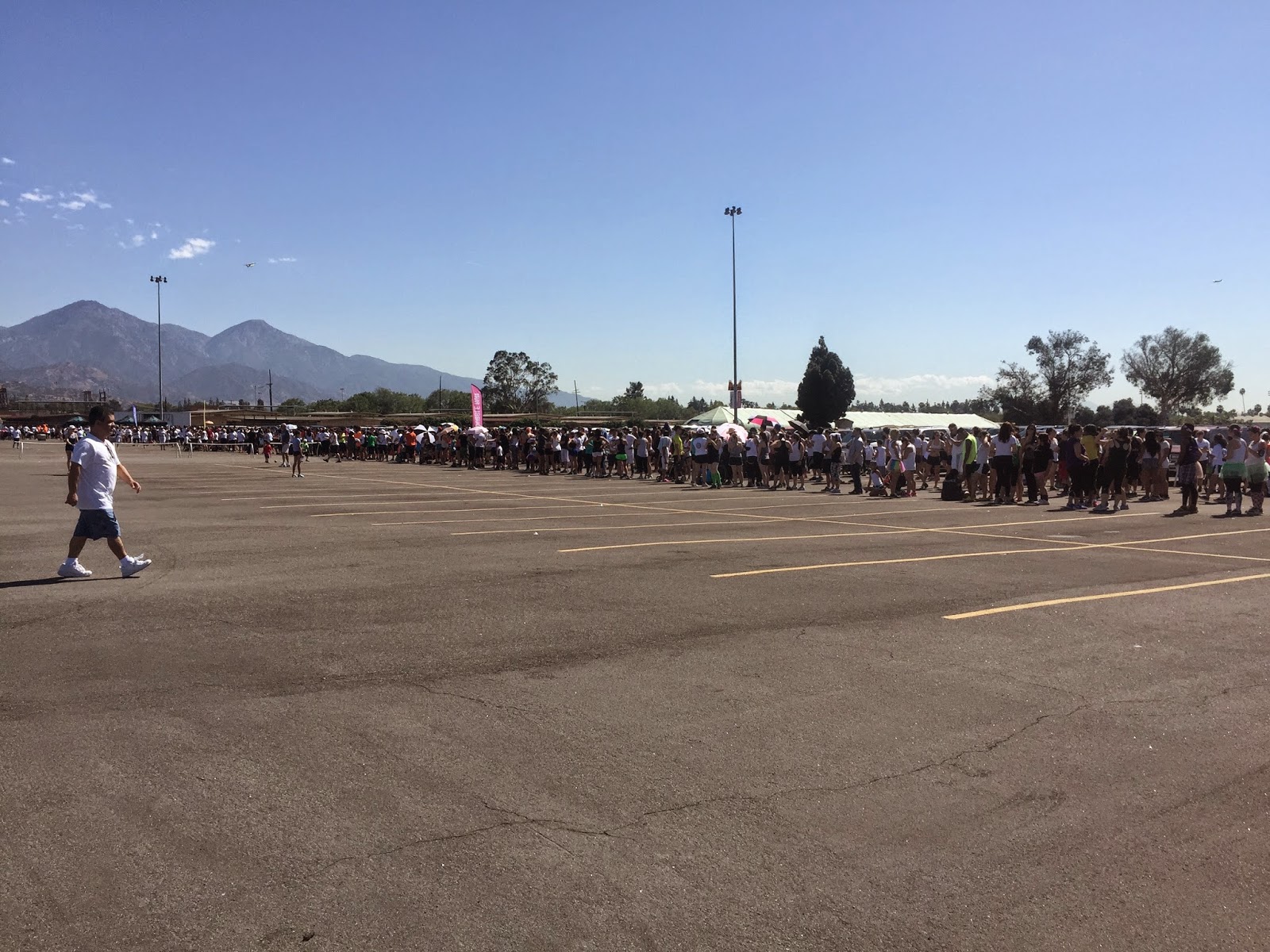 it took us a little longer than i'd like to admit to find the car, but we eventually got there.  and when i took off my bubble-splattered tutu, my legs were a mess: 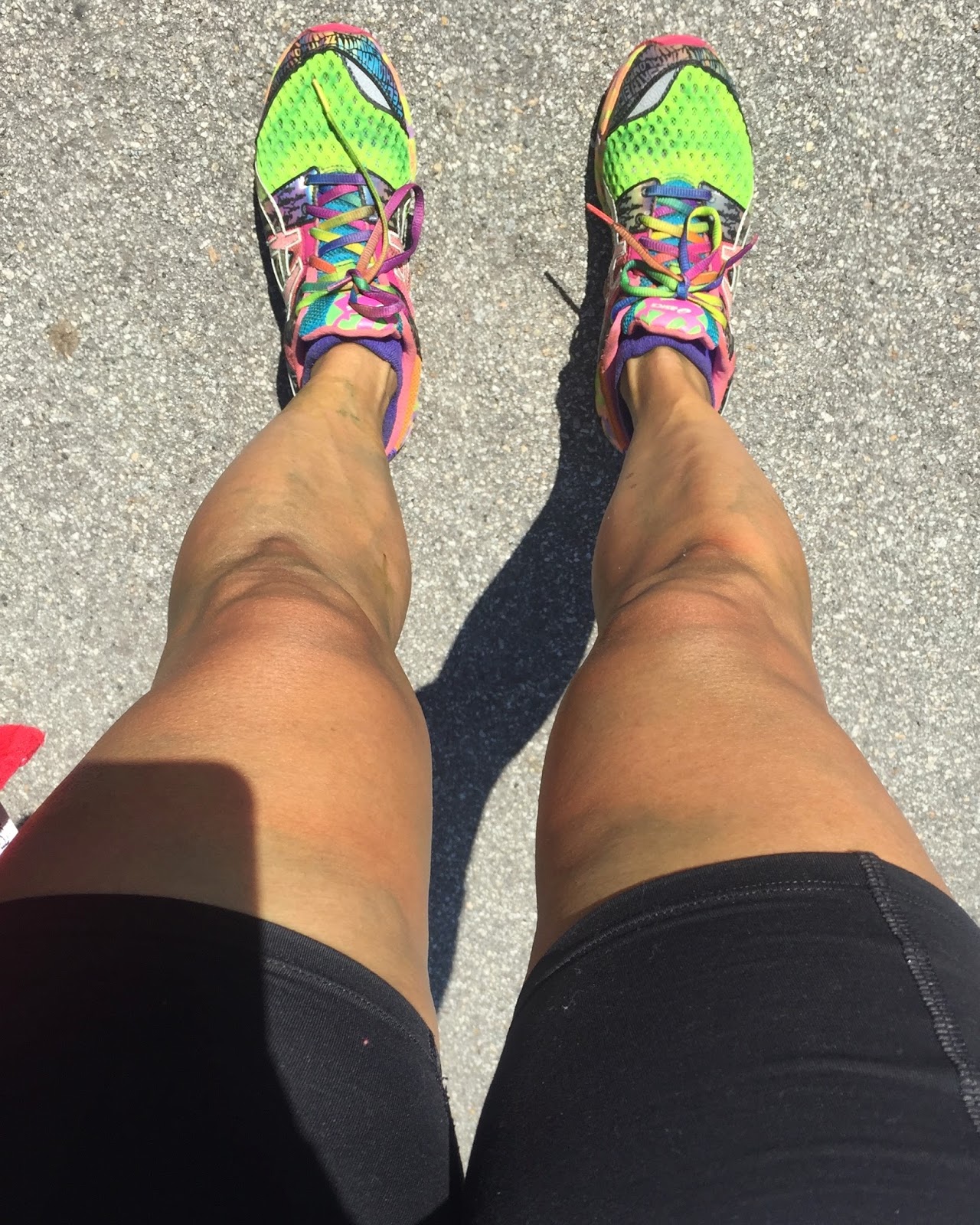 it had been a really fun morning, despite the heat and the crowds.  i hope it comes back to the fairplex next year, because i think maybe by then our girl scouts will be up to the challenge.  yay for bubbles!
at May 06, 2015

Email ThisBlogThis!Share to TwitterShare to FacebookShare to Pinterest
Labels: barre love, bubblehead, running my ass off