kind of like tom hanks in "the terminal," but not

i realize that this is probably the worst first world problem of all first world problems, but can i just say that packing and prepping for vacation really sucks?  trying to remember every little thing and making sure we cover all the bases (hold the mail, cancel services, board the dog, do ALL the laundry, check in online, grab the passports, etc.) is the worst.  ugh.

but then you zip everything shut, turn everything off, grab the bags and hop in the car and vacation has officially begun! 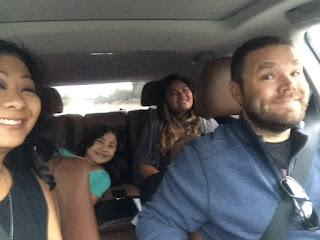 we decided to go the super easy route and use the valet option at the parking spot near lax for this trip.  it was great - we pulled up, the dude came out to take our bags and load them onto the shuttle, and all we did was leave the keys and climb onboard. 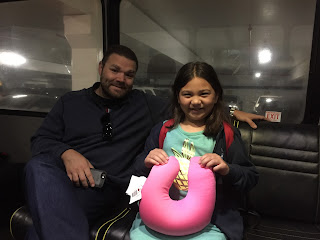 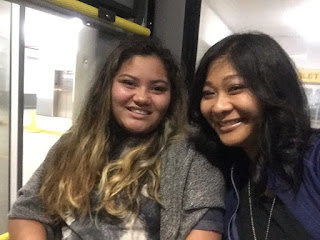 since we'd already checked in and paid the baggage fees online, when we arrived at our terminal all we had to do was leave the suitcases with the guys at the curb and head on in through security.  for some reason, the old lady had been given TSA pre-check, which was great for her except that she ended up waiting for us after breezing through in mere seconds.  heh.

we had lots of time to kill before boarding our plane, so we went off in search of some breakfast.  it was nice to sit down and relax over some eggs and bacon at ford's filling station: 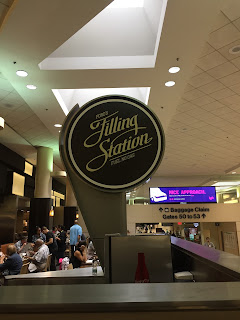 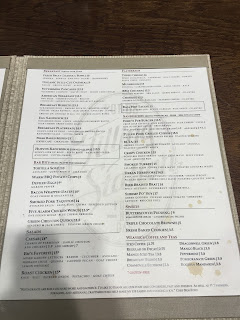 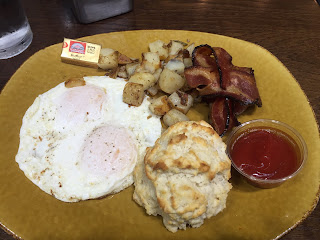 the bean had opted for the breakfast flatbread.  needless to say, she pulled off everything green and focused on the good stuff underneath. 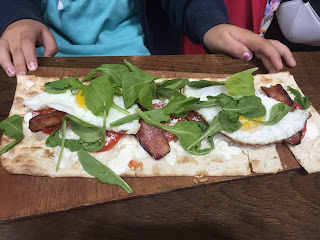 i thought it was kind of cool to see a pared-down version of l.a.'s famous farmers market nearby. 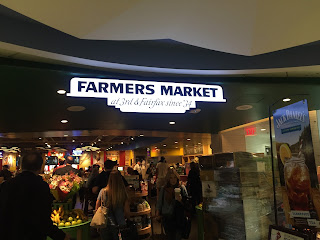 and i was super excited to finally bust out my bag from the kate spade/minnie mouse collaboration.  i'd had her tucked away for months, just waiting for this vacation to begin. 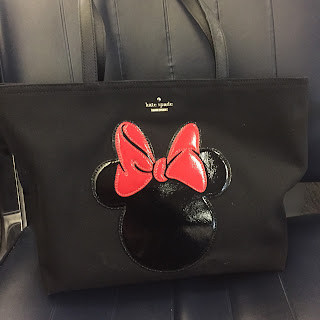 at last, it was time to board the plane and really get this party started. 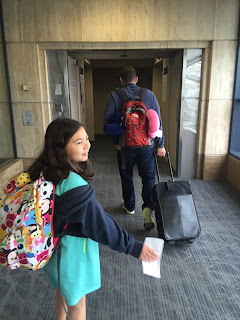 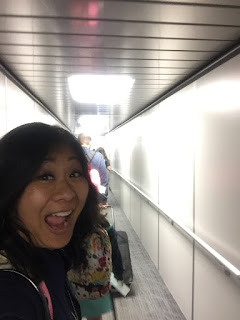 the old lady had helped me do some secret shopping for her sister's carry-on.  while we chose not to surprise her with a new bag (since she'd done a great job of not destroying her school backpack this year), we did stuff it with a bunch of fun stuff.  she wasn't allowed to open it until we were settled in our seats, and she wasted no time once we were all buckled in. 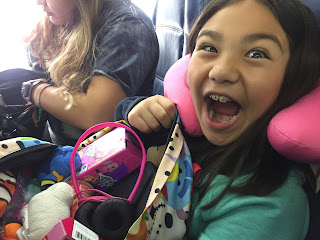 what was it that made her so happy, you're wondering?  well, we'd bought her a big ol' pack of brand new, season 5 shopkins. 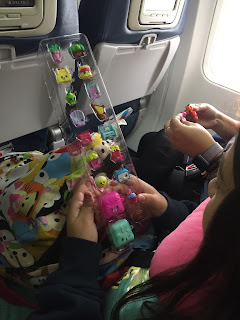 i was pretty excited to check out the movie selections, but when i went to turn on my monitor, i got this: 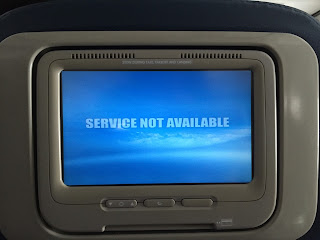 womp womp.  but both girls' screens were working just fine.  the old lady leaned over, pushed a couple of buttons, and presto: 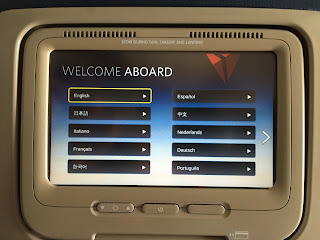 but first, takeoff.  i held the bean's hand and sat back and said my usual prayer...because takeoffs are my least favorite part of flying. 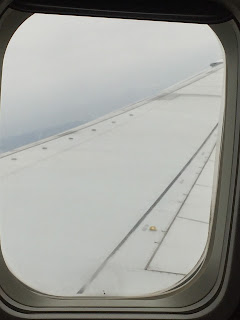 the bean was stoked to go through all the stuff in her bag.  she oohed and aahed over her new shopkins, ate some snacks, browsed through a book, did a few sketches, and tried out some new origami. 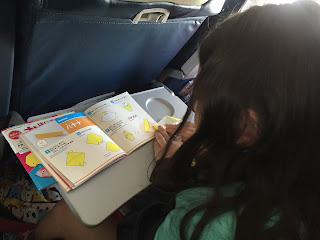 and i was pretty happy to see that there were outlets at every seat.  i was reading a book on my kindle app, and i always have an irrational fear of my phone battery dying.  because what good is doing shit if i can't take pictures of it?  heh. 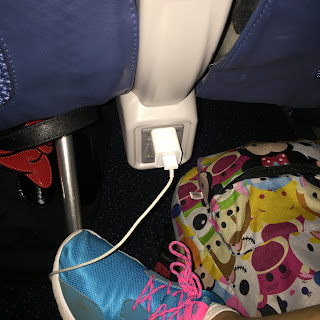 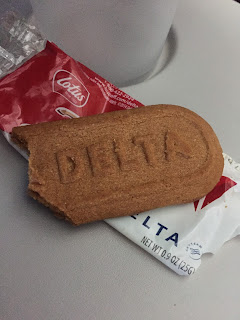 and another thanks to delta for allowing me to check off "brooklyn," one of the movies on my "must-watch from the oscars 2016" list.  it was really good, and the old lady and i both enjoyed it immensely.

it was a pretty uneventful flight, which is always a good thing.  and when we landed in orlando, we felt the heat and humidity as soon as we stepped off the plane.  ugh.  but we were pretty relieved to finally get up and about and hop onto the shuttle to the next terminal. 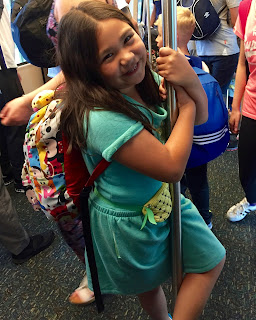 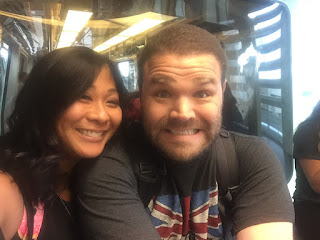 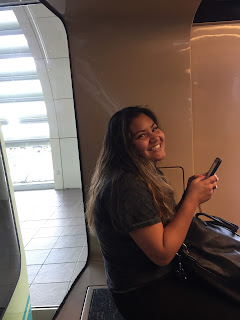 i'd perused a handful of options for the night, like a bunch of hotels in cocoa beach and near the port where we were to board the ship.  but then i saw that there was a hyatt right inside the orlando airport, and i thought that sounded like the easiest and most convenient way to go.  we could board the disney shuttle from here the next day, and so i booked it.  we even got a room that faced a runway, which was kind of cool. 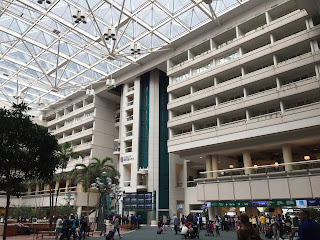 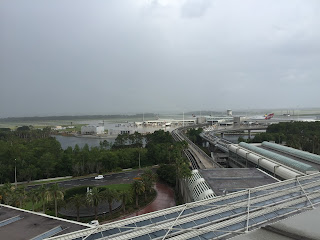 we decided to just have dinner at mccoy's, right there in the hotel restaurant.  nothing special, but it was good enough for us that night.  and then we decided to walk around the shops in the terminal. 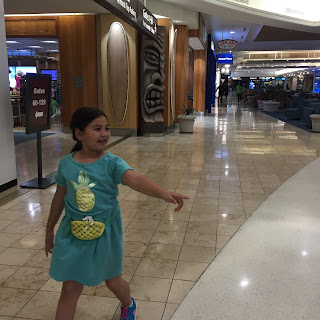 it was kind of weird to just stroll around the airport, without any luggage and in no rush to get anywhere.  we just kind of sashayed our way through all the shops, perusing merchandise and checking things out.  and of course, there were two giant disney stores in the same building. 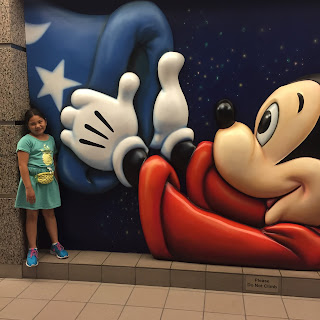 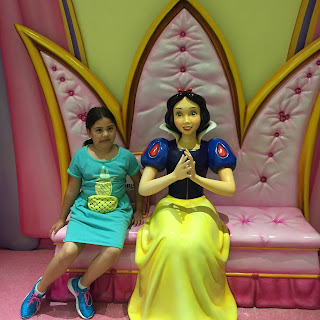 it had been a pretty long day, with lots more fun coming our way.  the hyatt was nice and comfortable, and we were all pretty happy to change into pajamas and slide into those cool, clean sheets.