it's been almost a week now, and i still can't believe that the bean is all done with second grade.  the time really does fly by, but this school year almost literally went by in a huge blur.

i managed to remember to find the ol' chalkboard sign just that morning.  because of course, we have to take the traditional "last day of school" picture: 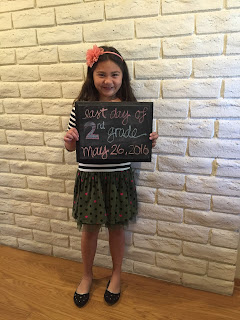 compared to the one we took on the first day of school, she didn't really grow all that much.  she's still pretty young, so i really hope that doesn't mean she's going to stop getting taller.  oy.

the old lady and i headed back to the school about an hour after we dropped her off, so that we could watch the final awards ceremony of the year.  the teacher is really good about emailing the parents of kids who are receiving awards, so i knew we had to be present for it.  and she saved her for last (this could also be due to the fact that they do them in alphabetical order)...and she had so many nice things to say about the bean that i was kicking myself for not taking video of it.  it was fun to watch her get all twirly and embarrassed and blushy as her teacher piled on the praise, and i beamed with pride as i listened. 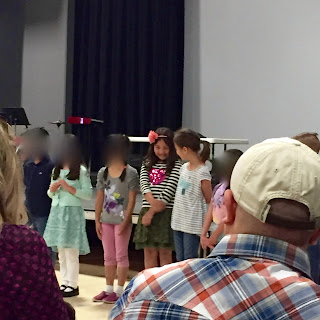 we only had our teacher for the second half of the year, but we loved her.  she's a really fantastic teacher, and i'll miss working with her as the room parent. 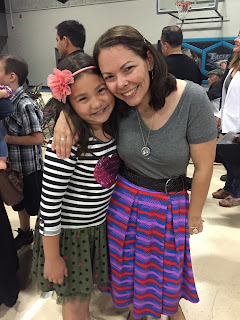 we made our way to the classroom, where i managed to get a picture with my rock star kid. 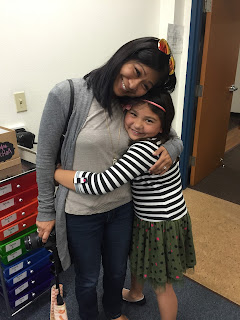 and then we said our final goodbyes for the year before heading outta there with a big packet full of end-of-the-year gifts and all of the awards she'd received - bible verse memorization for the whole year, citizen of the year, a silly "puppy" award, another for her participation in the speech meet, and one for excellent behavior out on the playground.  she'd racked up every award there was to earn except for perfect attendance...which she totally would've gotten if not for a sucky week where she got sick and had to stay home for like three days towards the end of the year. 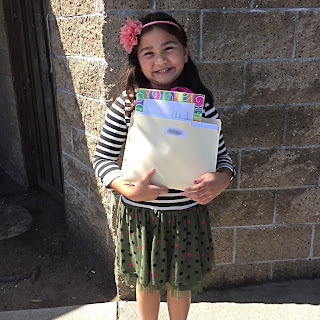 when we got home, we found something on the doorstep that she'd anxiously been waiting for since we placed the order last week.  it was coming from china, so i actually didn't think it was coming for at least another week. 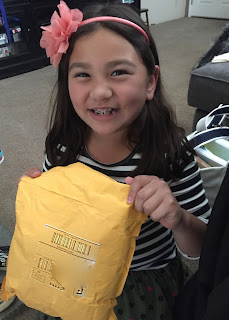 do you know what silly squishies are?  they're these little sponge-like figurines that are super fun to squeeze and squish and play with.  she's a big texture freak, so these things were like heaven to her. 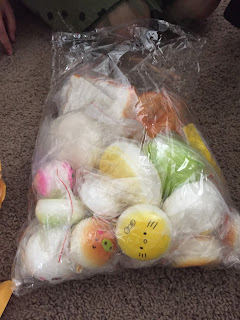 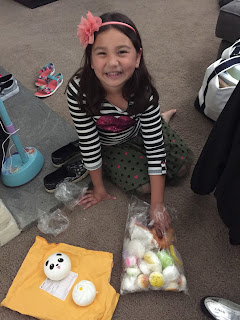 she sat there and unwrapped each and every one of the 30 pieces she'd ordered, and she was one happy camper.  she's totally addicted to them all, and she's spent a bunch of time sorting through them and figuring out which ones she wants to give to which of her friends.

and now we have the whole summer ahead of us to hang out and do fun stuff.  we actually have most of it all planned out, and it's going to be over before we even get a chance to enjoy it.  yikes.
at June 02, 2016