getting our jamz on

it started last week, with the team's showcase extravaganza that started off with picture day.  the girls had just received their brand new uniforms and were all excited to put them on and see how they felt as they performed the routines they've been practicing for months.  hair and makeup for the pictures were optional, so the bean went with the natural look. 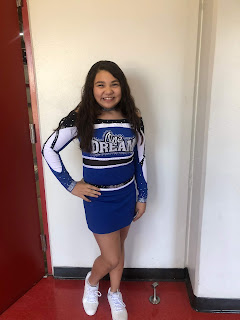 they were really excited to perform for the crowd - it was a packed audience, with all 300 tickets completely sold out. 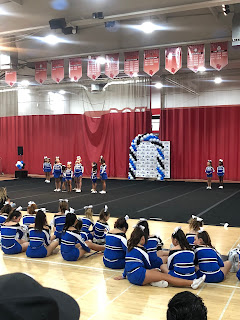 the jitters were definitely in full force, because the five teams struggled a little with their routines.  we were all still super proud of them though, and the girls looked relieved to have it over with.  i took this of the bean and the hub and we all cracked up when we saw the old lady and her special friend wrestling in the background.  best photo ever. 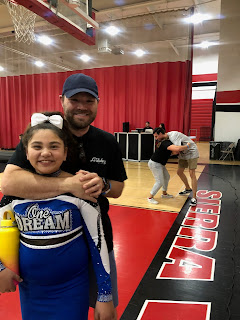 i managed to get one with her too, but this shot is much less funny, 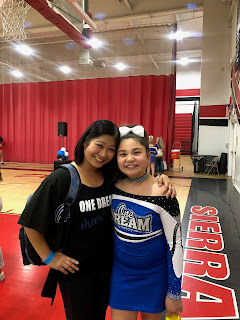 and then they spent all of the next week practicing for their first competition.  they practiced almost every day that week, and then on friday night the two of us drove down to newport beach and checked into the marriott just outside the UC irvine campus. 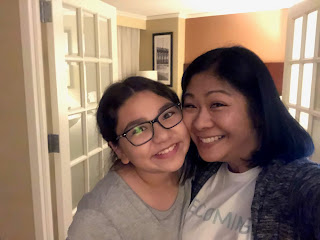 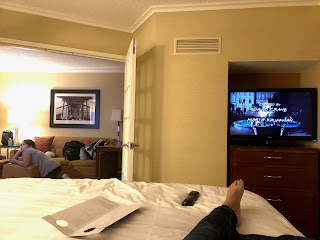 the next morning, i worked on her makeup and got her hairpiece all pinned into place before i threw my "cheer mom" tee on for the day.  the girls were all wearing this tee over their uniform, with this year's tagline printed on it: 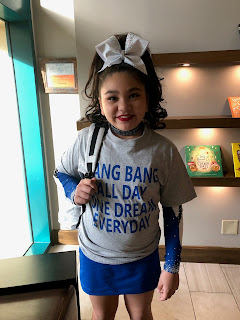 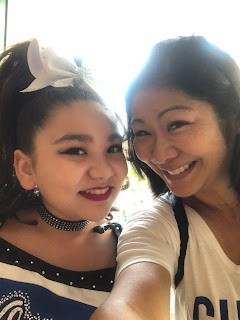 our first jamz cheer competition was at the bren events center on the UCI campus. 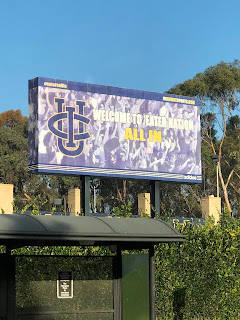 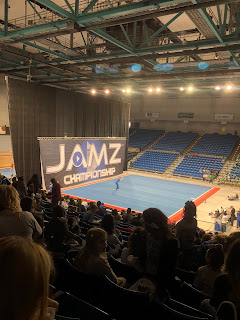 we got all checked in, secured our section of the venue, and settled in to wait for the girls' turn to warm up.  i could tell she was super nervous as they headed outside. 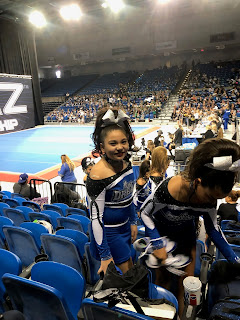 i'd worn my sparkly chucks again, just as i had all last season.  they seemed to bring us luck, because they placed every time i wore them.  i really hoped that luck would hold out for this new season. 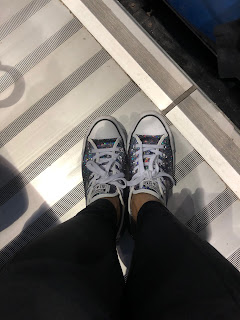 this is team "believe."  they took this just before they hit the mat: 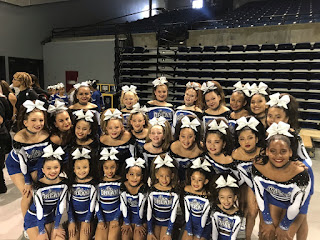 i have to admit, i loved last year's routine way more than this year's.  but i know they've worked really hard on improving their skills and taking their performance to the next level, and while they seemed to be struggling during practices and showcase, they seemed to pull it together pretty well once it was showtime.  what i didn't realize was that two of the girls had collided as they did their tumbling runs, which ended up really hurting their score. 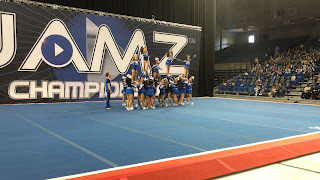 did i mention that the bean is actually cross competing this year?  instead of performing with just one team, she's also a backspot for a second group of girls.  this means double practices, but that also means that we get to watch her perform twice during competitions.  about an hour after her first performance, she headed outside to warm up again with her second team, "trust." 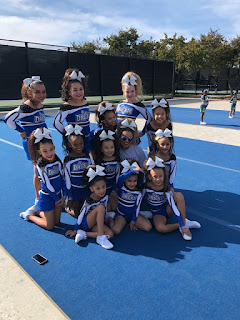 this team is quite a bit smaller than her other team, and she seems to like this routine better than the one with her first team.  and it was fun to see her take a spot in the front during a jump sequence.  i'm so glad she can jump higher than her mother. 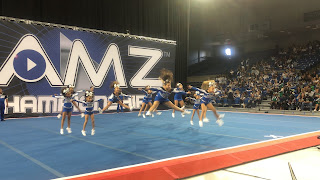 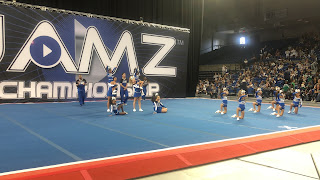 unfortunately, they suffered a couple of missteps during their routine as well, and when the awards ceremony started we got to see the results of their performances.  believe ended up taking third place, and the score sheets told them that that tumbling run collision cost them two points and first place.  trust ended up taking second, partly due to the failed stunt but mostly because the team that took first was bigger and better, with every single girl able to hit back walkovers and back handsprings.  that always earns more points.

still, it was a great effort with some pretty good scores that earned them spots in the national championships in las vegas come january.  we picked up some food after we left the auditorium, and almost as soon as she'd finished the last bite of her in-n-out burger i looked over and saw her like this: 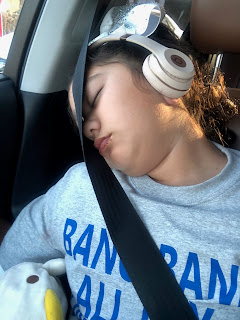 she only has practice with one of her teams this week, but with their next competition in two weeks, i'm sure they'll ramp up the sessions again once thanksgiving week is over.  rest up, kid.  it's gonna be a rough, bumpy ride to bakersfield.
at November 19, 2018