with the bean off for thanksgiving week, we decided to brave disneyland on monday with the old lady.  we'd seen someone post about some fabulous-sounding beignets that were served only at cafe orleans, and i was able to score a reservation for lunchtime.  perfect.

we didn't leave early enough for rope drop because stevie had a grooming appointment and couldn't be dropped off earlier than 7:30, but we still managed to pull into the parking structure at 8:30...just half an hour after the parks opened.  the line to get in was pretty long, and even with all of the lanes open it took us a good 15 minutes to finally get through and park the car.

it was totally okay though, because we weren't in any rush to get anything in particular done and were anticipating pretty big crowds anyway.  and so we sashayed through security, found seats on the tram to the entrance and decided to stop for a photo op in front of the giant christmas tree inside california adventure.  the old lady hates the cheesy poses, but she put on her game face and threw out her thumbs-up with a smile. 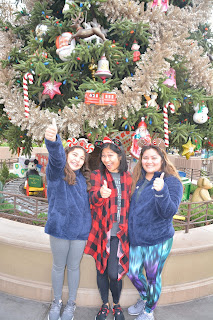 we're modeling some fun christmas-themed ears that i've been working on...more on that later. 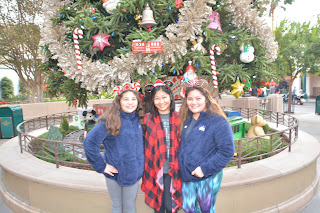 when we were done, we slid around to the other side to take a quick shot of the bean that recreates another picture we've taken of her before.  and then when i looked at my photo archives, it turned out that it wasn't actually an annual shot...looks like we were only remembering to do it every other year. heh. 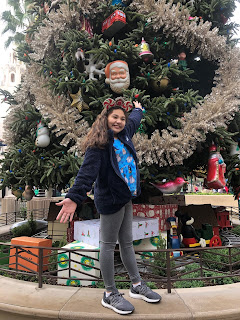 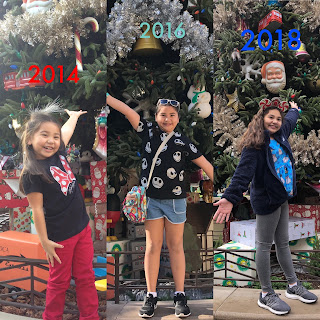 we love to look in the shops to check out all of the holiday merchandise, and as we walked past one of the quick-service restaurants this caught our eye: 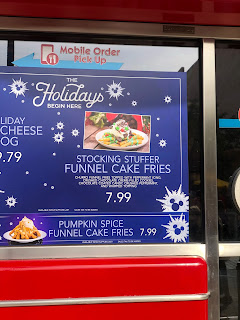 we are definitely going back at some point to order those.  yum.

the fastpasses we'd secured for our two favorite rides in this park opened up pretty quickly, and they ended up being the only rides we did that day. 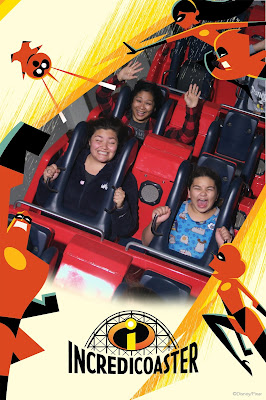 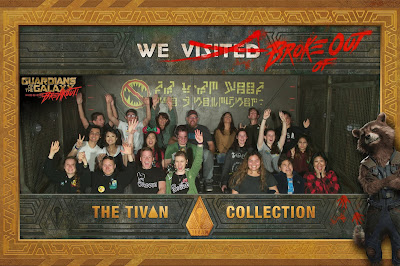 it was really crowded on the disneyland side.  it usually is, because it's nostalgic for most folks and the kids love fantasyland and the princesses and the castle.  the bean pointed out that the holiday garlands were strewn across main street this time...we'd noticed that they weren't up the last time we were here. 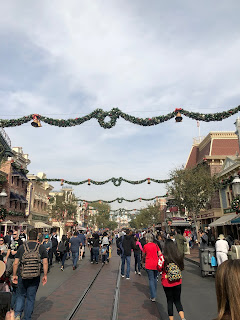 we hadn't had a chance to catch the sneak peek of the new "wreck it ralph" movie, and so that's where we went first.  we've got tickets to see it later on today, so it was really fun to see an extended preview and get excited to see the whole movie. 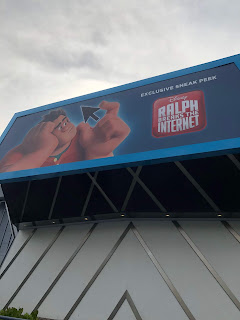 and by the time we got out of there, it was time for our lunch reservation.  we headed on over to new orleans square, and after a bit of a wait we were finally seated.  the menu was pretty much the same as before, but there was also a seasonal menu to pore over. 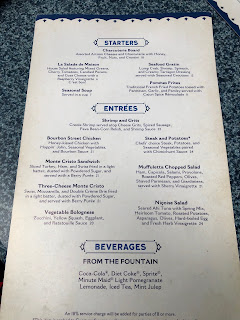 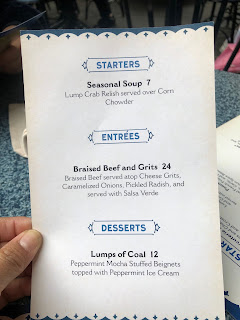 we were surprised when the server arrived with a tray containing two entrees, since we hadn't gotten the appetizer we'd ordered yet.  when i asked him what he was about to put on the table, he said "it's the holiday special."  i looked at it and couldn't really make out what it was, so i asked him again what it was.

this went on for another couple of rounds before i finally gave up and motioned for him to place the food on the table.  it turned out to be the braised beef and grits that the old lady had ordered...off of that holiday menu.  but it was really frustrating, and the table behind us had stopped what they were doing to listen to the annoying exchange.  to his credit, the server remained calm with a smile on his face...but honestly, disneyland - this is not the first time in the last few weeks that we've had servers not have any idea what they're serving and couldn't answer simple questions about the food.  ugh.

so anyway...it's not often that we turn down a good charcuterie board...and this was not one of those times.  even though it arrived at the same time as our entrees.  oh well. 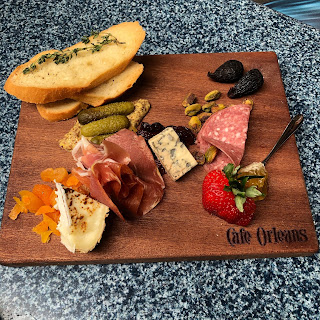 the bean and i shared a monte cristo sandwich, which is a family favorite but is always such a big serving that i knew we'd be better off just splitting the plate.  not to mention that it's not the healthiest thing ever.  heh. 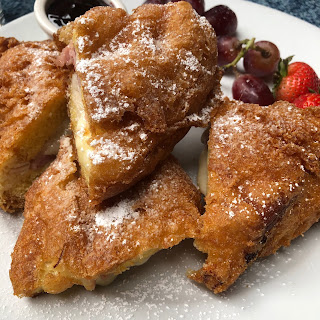 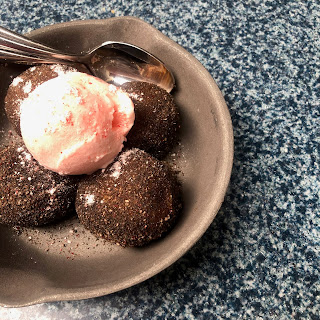 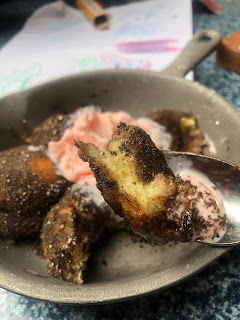 the service had been excruciatingly slow, and by the time we finished our meal the park was so crowded you couldn't tell the difference between the people walking through and those who were in line for rides.  we were kind of over it by then, and didn't want to spend our whole day elbowing through crowds, and so we called it a day.

it figures that we'd come on a day when we didn't have to rush home for music lessons or cheer practice or anything like that and were free to stay as long as we wanted, and yet we were in the car and home before 3:00.  haha!
at November 21, 2018

Email ThisBlogThis!Share to TwitterShare to FacebookShare to Pinterest
Labels: disneyland, it's beginning to look a lot like christmas