we all know of my love for justin timberlake, yes?

so when he announced that he'd written his very first book, i knew i was totally gonna get it.  i don't even care what he wrote in there...hell, for all i care he could have typed out the phone book and inserted a bunch of pictures and i would have still wanted that thing.  anyway, he posted a video on instagram where he snuck into barnes & noble in new york city and signed a bunch of copies, and so i hopped right onto the website to order a copy to pick up at my local store.

while the old lady and her special friend took stevie dog into petsmart to pick up some supplies, i scooped up my book and then promptly took this: 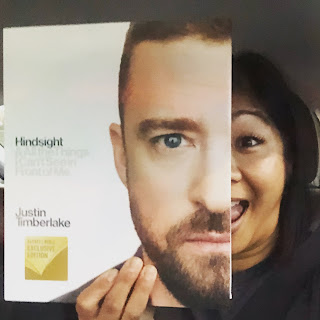 i posted it on instagram, because you know stuff doesn't count unless you share it on social media.  heh.  i got a few likes here and there, i know the hub totally side-eyed it, whatevs.

the next morning, i went to look at my instagram feed and just about shit myself when i saw this: 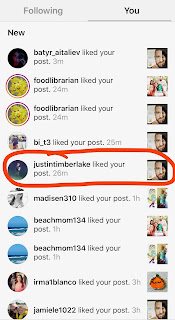 i thought maybe it was just one of those fan-created instagram accounts...but when i clicked on it i found that sure enough, it was his verified account with the blue checkmark.  woohoo!  i went to my post and totally swooned when i saw this: 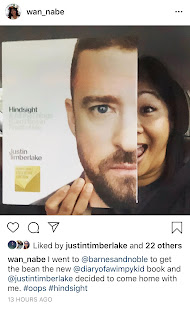 i know, i know...it's really silly.  but damn...i was really excited!  it's probably the closest i'll ever get to meeting him.  i've been a JT fan since his *nsync days, so me love him long time.

later that evening, while we were at the bean's school fundraiser my phone buzzed with a text from a friend who excitedly told me to go and check out justin's instagram story.  and when i clicked on it, i saw what she was so happy to share with me: 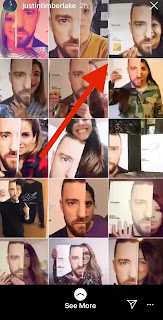 he'd compiled a fun little video of posts from people who'd bought his book...and of course, most of us took pretty much the same exact picture.  ha!  i don't care though.  i was excited to have a tiny part of his book release promo, and now i'm going to hunker down and actually read the thing.

he's got one of his "man of the woods" tour stops coming up in anaheim in a couple of weeks, and while i already got to see him with my friend dailygluttony when he was in l.a. earlier this year...i kind of really want to go.  and a friend of mine from my running days has a couple of tickets she's trying to unload.

Email ThisBlogThis!Share to TwitterShare to FacebookShare to Pinterest
Labels: wan and JT sitting in a tree