experimenting in the kitchen

during a costco run, i picked up a giant jar of sun-dried tomatoes to throw a little different twist in to a meal or two. well, it IS a giant jar, so it's probably more like "a meal, or twelve." 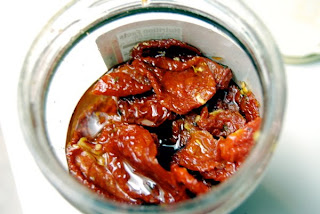 i scoured the internet for ideas on how to use these things - but with my usual criteria: meatless ideas for the teen, low-cal/low-fat/low-carb for the hub (who's knee-deep in an office "biggest loser" contest with a lot of cash at stake). i found several good recipes and decided to try giada's recipe for sun-dried tomato pesto. it was written with penne pasta in mind, but the teen's all-time favorite is angel hair, so that's what i went with. and for the hub, i just seasoned a chicken breast and tossed it in the oven to bake.
i scooped a crapload of those tomatoes out of the jar and poured some of the olive oil from it into my "food processor" *cough*babyfoodmaker*cough*. after adding some minced garlic, a little salt & pepper, and a handful of dried basil (because i was too lazy/cheap to go and buy the fresh stuff), i gave it a whirl and ended up with this lovely, fragrant pesto. 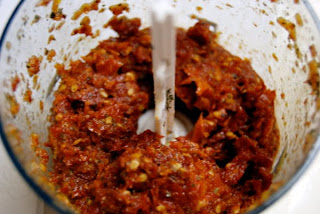 this is an awful picture, i know it, but it's all i got. by the time i was done cooking (and it actually didn't take very long at all, but i got a late start), i had to hustle to get it all on the table so that my family could actually eat at a fairly decent hour. i'd added some frozen broccoli florets to the pasta as it bubbled on the stovetop, drained it, and tossed it all together with the pesto. 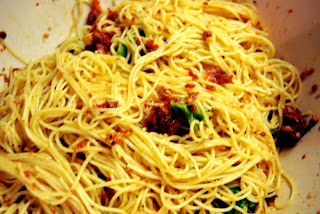 i smeared some on top of the hub's chicken, served it with some steamed veggies, and dinner was served. and i was gratified when they both mumbled their approval - the teen said "OMG mom, this pasta is ah-MAY-zing. it's so good, i want to roll around in it and eat my way out." the hub really liked it as well, although he was slightly less dramatic in his enthusiasm. heh. the best part was how easy it was to put together. a keeper, for sure.

the bean woke up on sunday morning with a mad craving for waffles. and you know i'm always willing to bust out the hello kitty waffle maker. but with no teen home to help eat them and the hub avoiding carbs like the plague, i decided to try out a common housewife/mom/etc. trick. i whipped up a whole batch of waffles, gave the bean a plateful, ate a couple myself, and then let the rest cool completely. 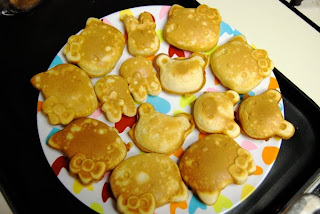 i threw the remaining waffles in a ziploc and put the bag in the freezer. now, i'm not always thrilled with how stuff turns out after i give it a deep freeze, so that's why i was slightly hesitant about doing this to begin with. but i figured it was worth a shot, because it would be lovely to have a couple of these with a drizzle of syrup during the week.

the next morning, i pulled a couple of waffles out, put them in my toaster oven, and set it on low. these come out with a really good, chewy/fluffy texture when fresh, and i was really hopeful that freezing them wouldn't totally fuck 'em up. and when the bell went off, i pulled them out, topped them with some syrup, and took a bite.

and yay! they were perfect. i munched on them on my way to work and was quite a happy camper. poor hello kitty's going to get quite a workout in the weeks to come.