as for me, i flipped out slightly, thinking of what the day was going to bring and fervently hoping it wasn't an omen of how it would turn out. sheesh. so much for my "eternal optimism." somehow, i managed to fall back asleep - for another hourish. the alarm went off at 5:30, and off we went.

the bean woke up just before we left, smiling sleepily and chattering quietly in her car seat as we battled traffic on our way to the dentist's office in arcadia. the stupid ass black cat that scampered across the street as we drove along didn't help my anxiety much. i wanted to get out and kick the shit outta that thing. and as we got closer and closer, i got more and more nervous and tried to cover it up by chatting and smiling brightly for her. she's already figured out that she doesn't like the dentist's (and doctor's) offices, so i guess i was just trying to make everything okay. ugh.

she didn't balk when we entered the office, but she clearly remembered it as she pointed at the plasma on the wall, checked out the waterfall in the corner, and scoped out the video games. 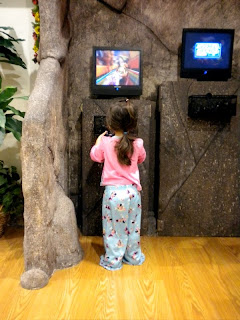 we'd gone to target and bought her some fun new minnie mouse jammies for the occasion, and she remembered as i took a picture of us and she asked to "see 'em?" 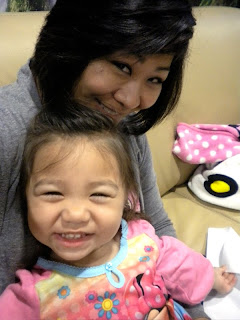 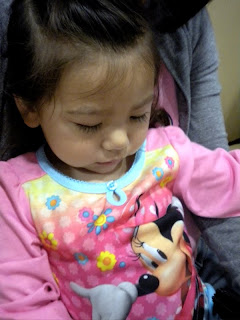 the dentist and doctor/anesthesiologist came out to greet us, ask a few questions about her medical history (during which we shook our heads "no" to every question), and check her heart and breathing. she sat quietly and allowed everything to happen without incident, and i hoped that was a good sign. she accepted a bright red bouncy ball and smiled at the staff, and i tried to relax, despite knowing that the anesthesiologist carried a syringe in his pocket that contained the stuff that would make her woozy.

the hub took her into his arms and i tried my damnedest to distract her with a fun book, but she knew something icky was coming. and it was - the syringe came out and was plunged into her left arm as quickly as possible as she screamed out in panic. she wailed and reached out for me, and i took her in my arms, held her tight, and watched her as the crying subsided into a blank stare at the opposite wall. we'd been warned that it could be a disturbing sight, watching the shot take effect and our sweet baby fade into a silent, unfocused lump.

i'm tearing up again at the memory. it really was tough to watch, and i did my best to remember that it was going to lead to great results. after all, she needed the procedures to ensure healthy teeth, and i tried to focus on the positive. but all too soon, the hub gently took her out of my arms to lay her down in the dentist's chair and i followed with blurry, tear-filled eyes. hers were still open, but she was really out of it and when i smiled and waved, blowing her kisses and telling her i loved her, i knew she hadn't seen or heard me.

as soon as she was in the chair, the staff got to work. the hub turned, saw me watching, and walked me back out to the waiting room. "i'll stay and watch - just relax and have a seat out there and i'll come out and keep you posted," he said. one of the assistants saw me and came over with a handful of kleenex, which i accepted gratefully.

and when i was out of anyone's line of vision, i cracked. i bawled like a freaking baby, people. but my vanity never leaves me - i carefully dabbed under my eyes to make sure my mascara wasn't running. ha! not even kidding. i sniffed and wept and watched my tears fall on the floor, and the hub came over to rub my back and let me know that she was doing really well. the IV was in place, she was completely out, and her heartbeat and breathing were strong. i relaxed a little, knowing she was in good hands, and eventually picked up a magazine to flip through as we waited for the pros to do their thang. "she's taped down to the chair, and i don't think you want to see her like that," the hub said. and he was right. i was already in about a thousand pieces after having seen her all drugged up, and i knew he'd watch over her.

the hub went back and forth between the waiting room and where the bean was, giving me updates as often as he had them. and we were thrilled to learn that the two teeth that we'd been so concerned about had healthy roots after all, which meant they wouldn't have to be pulled out and she could just get little crowns on them till they fall out.

right around an hour after they'd begun, dr. eddie came out and announced that everything had gone perfectly. she was moved into another chair one space over, so that she could continue sleeping and they could prep for their next patient. here's where all the action'd been: 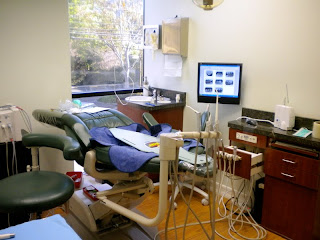 she was propped up with a little shoulder roll and a "pillow" for her head, allowing for easy breathing. they hooked her up to another monitor that would let us know when she was starting to come around, and said that the longer she slept, the happier she'd be when she woke up. 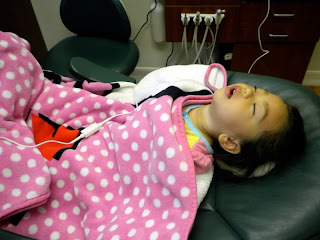 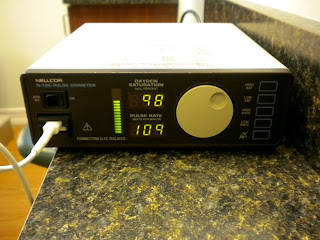 he showed us her x-rays, pointing out where the work had been done and also where her permanent teeth were forming, which was really cool. she's got some big toofers coming in a few years. and i couldn't stop looking at her and brushing the hair back from her face. i just wanted to hold her and give her hugs, but i held back and let her sleep it off. 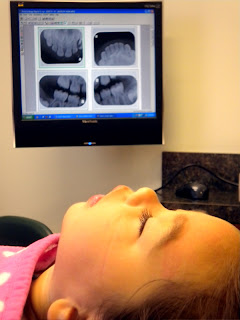 the anesthesiologist saw me snapping away and gathered dr. eddie and his staff to take a group pic. haha! awesome. 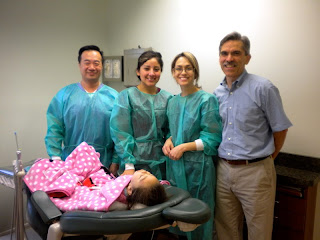 after about an hour and a half, the monitor went off and she finally woke up. she looked around with glassy eyes, and i dropped everything and rushed over to pick her up. the doctor came over to check her out and remind us that her coordination and balance would be off in a big way - "keep a hand on her shoulders so she doesn't lean back and fall out of your arms." she didn't say anything and was still out of it, but she was awake and she looked wonderful to me. we wrapped her in the blanket, bid adieu to the office, and headed home.

in the car, she sat quietly and moved her head from side to side slowly while i watched. she picked up one hand and pointed to the cotton ball taped to her wrist where the IV had been: "band-aid? i got a band-aid?" and then she noticed that something was off and opened her mouth wide and moved her lips around. "feels...weird," she said as we laughed. she was still numb from the anesthesia, and kept making funny faces. oh, i was so happy to see her smile.

the faces continued when we got home. 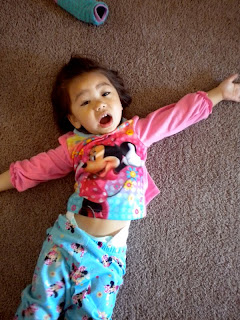 it didn't take long before she decided she wanted to get up and play. i followed her every move, watching her teeter on shaky legs. and she thought her clumsiness was hilarious:

after climbing up and down on the couch and the chair, with me like a shadow, she put out her hand and said this:
she spent most of the afternoon defying the warnings we'd been given: "she's going to be really sleepy all day long and won't want to do much." instead, she was up and around, just like any other day...until about 5:00, when she finally crashed on the couch.
how do you spell "relief"? s-o-g-l-a-d-i-t-s-o-v-e-r.
at March 17, 2010