i would be completely remiss if i didn't share the sweet surprise from my friend lilcee that officially kicked off birthday princess week.

she'd invited the bean and me to come over for a swimming playdate, which was fabulous considering it was hotter than the 9th circle of hell.  i seriously fear our electric bill for the second month in a row, people.  it's going to be epic, and not in a good way.

anyway, the bean and mini cee hadn't seen each other in a really long time, and after comparing notes lilcee and i found that they'd both been asking us to meet up soon.  so this was a great opportunity for us to have a fun GTG, relax in the cool water, and get in a little exercise all at the same time.

when it was almost time for us to head home, lilcee disappeared into the house and came out with a birthday card, a candle, and a box of delicious-looking cupcakes.  one was a hostess-style cake, and the other a classic red velvet with cream cheese frosting.  YUM. 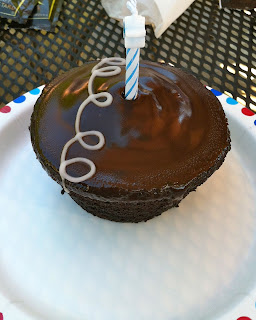 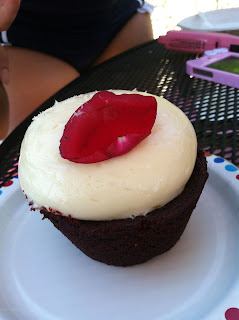 it was such a sweet gesture, and i really appreciated it.  lilcee, mini cee, mr. cee and the bean all sang the birthday song to me, and then we cut the cakes (which were pretty ginormous) to share. 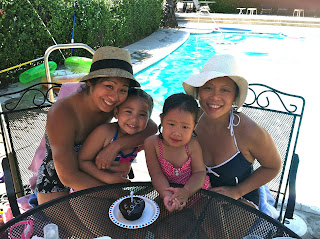 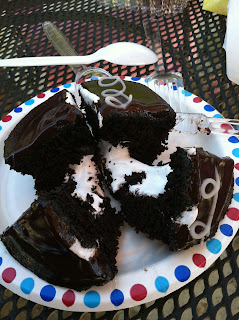 then on the day after my actual birthday, the girls and i finally had a chance to tear into the cake that the hub had bought for me before he left on a business trip.  he'd made sure we had enough candles too, and the teen got to work putting every last one on that thing.  it took both of us to get them all lit (i know i'm not supposed to do this myself, but she needed help, yo), so when it was all done they sang "happy birthday" to me...quickly. 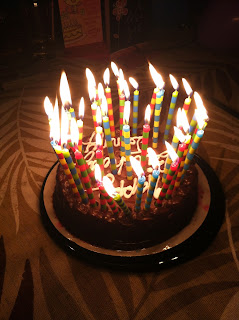 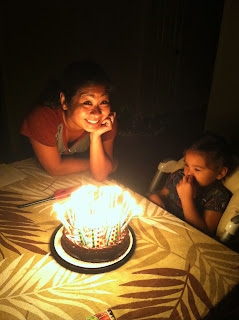 and no, the bean isn't picking her nose in that shot, i swear.

i took a big, BIG breath and managed to blow them all out in one shot.  after taking all of the candles back out, that cake was pretty to' up. 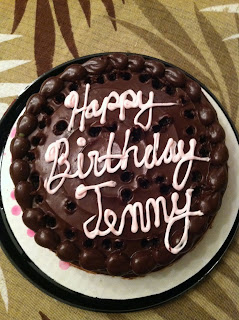 and so although birthday princess month isn't officially over yet, the festivities have concluded and given way to the next task:  bean's bash 5.0.