day two of the avon walk found us groggy and sore as all hell in our pink tent.  we had a slightly later start time than the day before, but not by much.  although since we were already on-site and didn't have to deal with parking issues, we were able to push it and get as much sleep as we possibly could and still have time to grab something for breakfast.

i guess the program was slightly different than walks of years past - we were to take a bus that would deliver us to the starting point for the walk, which was at the santa barbara polo & racquet club.  from snippets of conversations i overheard over the weekend, the wellness village typically set up camp on the polo fields but had somehow booked an event for the weekend that conflicted with the walk.  d-oh.

after getting dressed, repacking our bags, rolling up the tent, and rushing through breakfast (i'm now addicted to plain nonfat yogurt with granola mixed into it.  never thought i'd see the day), we boarded one of the first buses. 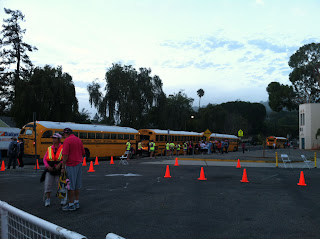 it wasn't a very long ride, and then we were pulling into the entrance of the polo club.  the flyer we'd been given with details about the day's 13.1-mile route told us that william and kate were here during their visit to the states last summer.  rather fitting, since we're totally princesses, right? 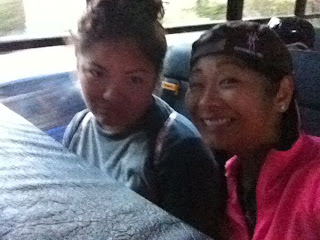 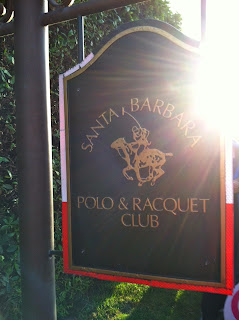 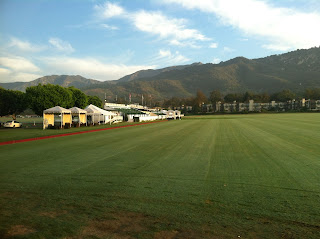 and just like before, there were several tables set up with snacks and drinks for the walk. 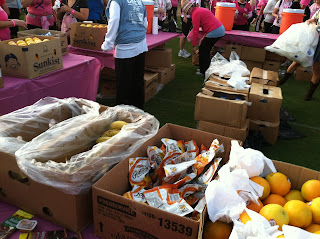 since the buses were still rolling in, the teen and i decided to take advantage of the tented lounge areas and enjoy the gorgeous sunrise. 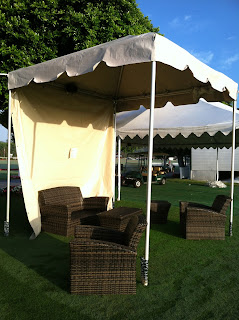 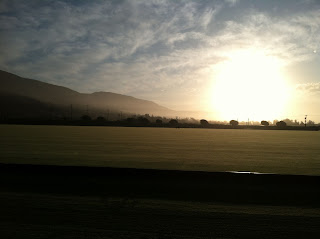 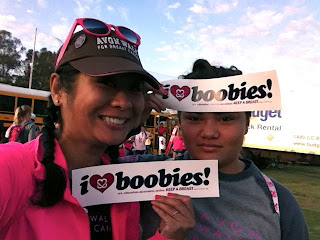 and then it was finally time to start walking.  the youth crew was in full effect at the start line this time around. 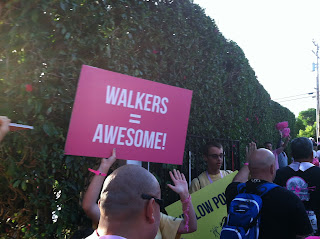 all of the cheerleaders and honking cars were back for the second day. 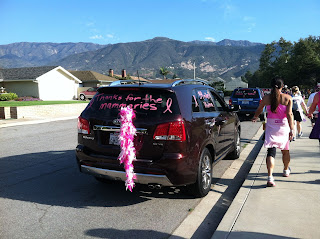 then as we went through one of the many residential areas along the way, there was a collective "oooooh" as we rounded a corner and found this.  apparently, the people who live on this street do this every year.  so nice. 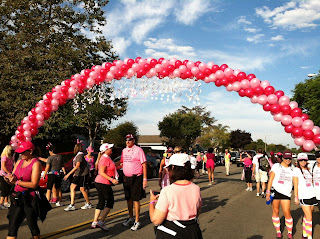 although i'd told the teen that she could quit anytime she wanted to - she was horribly sore and all blistered up from the first 26 miles - she marched alongside me for quite a while.  but by the time we got to this mile marker, she was just plain over it. 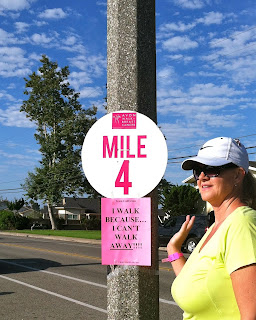 luckily, there was a rest stop just beyond this point.  she was totally cool with me going on ahead while she caught a bus to the lunch stop at mile 10, and so we parted ways (temporarily).  and before i knew it, i was here. 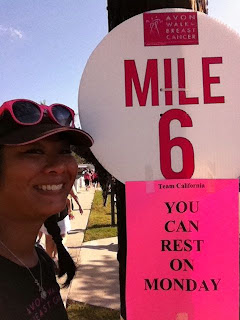 somewhere past mile 8 we made a left turn onto a bike trail that was rather pretty, despite the fact that it went underneath the freeway.  it made for a nice change after walking on all that concrete. 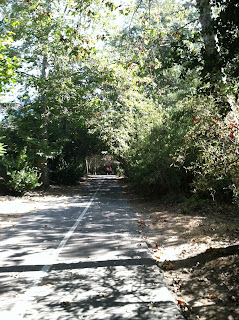 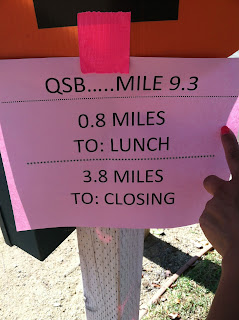 the teen texted me just before i reached mile 10.  she was enjoying some quiet time, sitting in the sun with her feet up.  i let her know that i was just a few steps away from her, and stopped for another dorky picture. 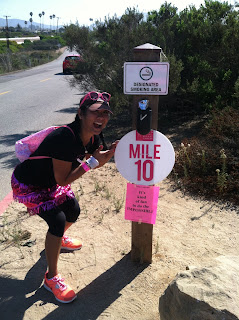 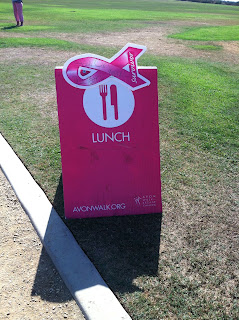 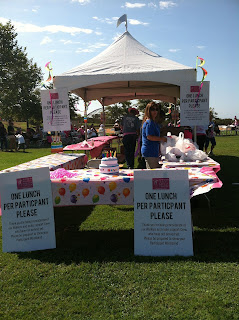 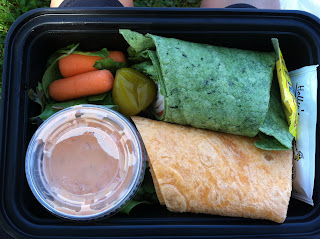 reunited, and it felt so goooood... 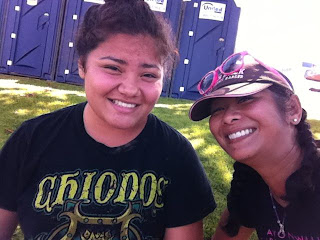 because she'd had a chance to rest up and get a li'l something in her belly, she decided to join me for the final three miles.  hey, why not?  at least we'd get to cross the finish line together.  i was thrilled to have her company again.  plus, this last stretch was the prettiest of the day. 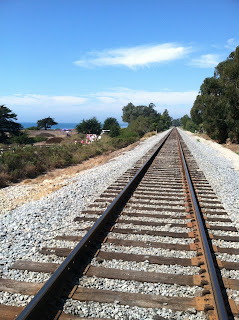 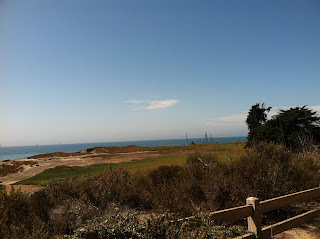 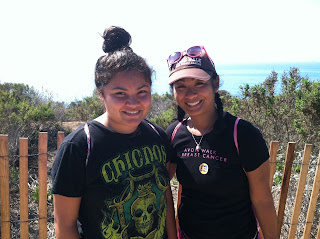 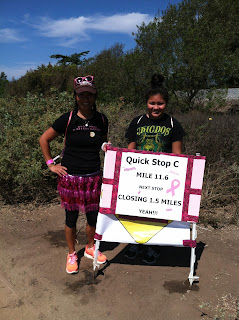 in no time, we were here: 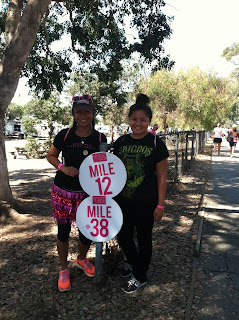 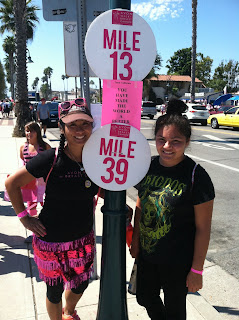 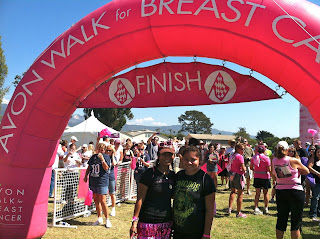 it truly was one hell of an amazing weekend spent with my girl.  despite the physical discomfort of the walking and having to do it on limited sleep, it was completely worth it.  i don't know that we'll do it again anytime soon, but it's most definitely a cause we both feel strongly about.  we agreed that it felt a little odd to be there without a true personal connection - something we're both really grateful for - and at times felt a little like frauds as we read the handwritten notes others wore on bibs pinned to their shirts.  it was just so strange not to be there in honor of anyone in particular.

but you know, 39.3 miles of walking gives you a lot of time to think.  i thought about the many women (and a few men) who were receiving their breast cancer diagnosis every three minutes.  and i reflected upon the testimonies we'd heard during the opening ceremony just the day before.  i thought about how lucky we were not to be directly affected by this disease, and how much i hope we never will be.  plus, walking amongst the hundreds of women who have survived this deadly disease was just so incredibly inspiring.

and then i thought of how all those cookies we baked and decorated are helping to fund the important research that will hopefully, one day, lead to a cure.  it sounds so silly when you think about it, but it's pretty cool to know that every effort, big or small, actually does help.  what a wonderful thing it would be for me to know that my girls could grow up in a world where cancer is a thing of the past.  from the walkers over this weekend alone, over $4.7 million was raised - and this walk was just one of nine held across the country in 2012.

cancer sucks, man.  plain and simple.  it needs to crawl in a hole and die.  and maybe sometime soon, that's exactly what it'll do.  all we can do is hope.
at September 28, 2012