last week, i had the good fortune to be in the vicinity of the grove for a free event celebrating the 19th season of "extra."  they tape a lot of the show there during the week, and you may remember that i've had a couple of awesome (to me, anyway) celeb sightings there in the past. 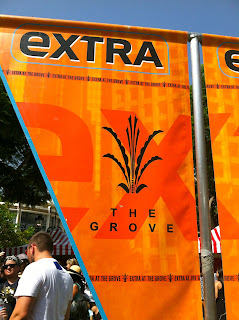 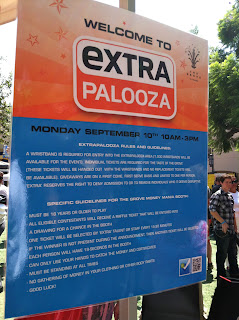 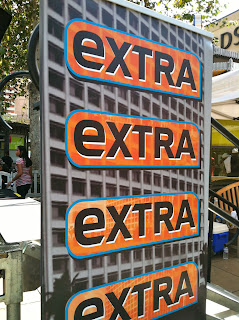 i'd already perused the schedule of events and was pretty excited for a couple of the folks who were slated to make an appearance.  and as luck would have it, i arrived just in time to watch mario lopez (forever a.c. slater to me, and from past experience have come to the conclusion that he's a super douchenozzle) interview chris harrison of "bachelor/ette" and "bachelor pad" fame.  i love chris harrison, despite the ridiculously redundant "this is the final rose tonight" line he's forced to utter at the end of every stinking episode. 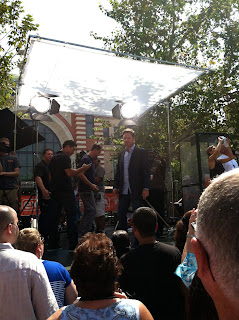 when the interview was over, he stopped to chat with some of the folks who wanted to talk "bachelor pad," since the finale was airing that evening.  he was really friendly and enthusiastic, which was a stark contrast to mr. douchebag who didn't bother to acknowledge anyone and required lots of cosmetic touchups. 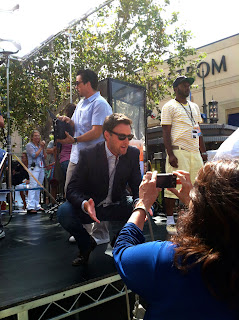 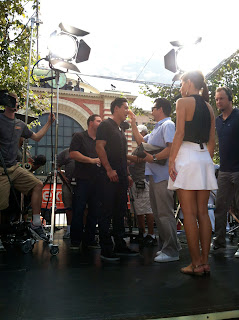 oh yes - that is maria menounos, who is tiny and gorgeous.

when chris hopped off the stage, i managed to catch him for a quick picture.  confession: i follow him on twitter, and i was stupidly excited earlier that day when i sent him a quick tweet and received a response pretty quickly.  i reminded him of it when i went to say hello, and he knew exactly who i was.  i may have been beaming just a little. 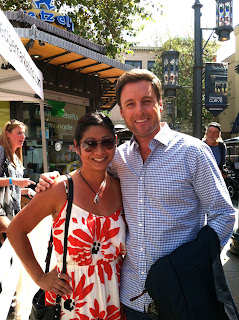 i'm so glad i managed to catch him right away, because a pretty darn good-sized line had formed in the few seconds i had to talk to him.  and because of the 90+ degree heat, i was starting to sweat like crazy.  that sun was totally blazing down on us, and i wished i had a hat or an umbrella or something.  man, it was sweltering.  ugh.

in the "meet and greet" tent just on the other side of the stage, i stumbled across the other person i'd wanted to see:  amber riley from "glee." 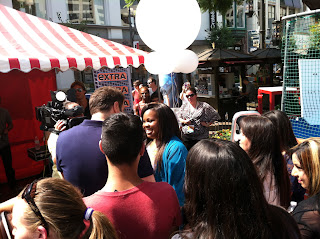 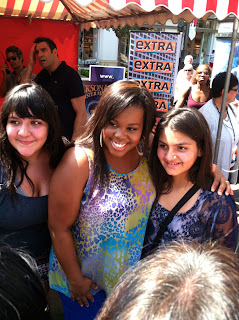 she was super popular with the crowd and i didn't get a chance to meet her and get a photo.  it looked like she'd already been there for a while, so i snapped what i could and moved on.

i was so hot by then that i kind of wanted to hop into this myself. 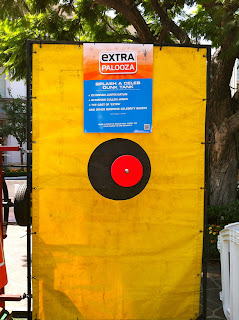 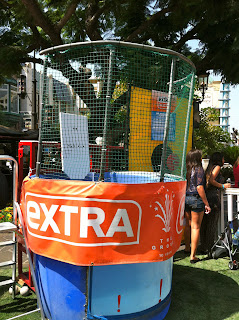 overhead, the goodyear blimp circled the grove with "welcome to extrapalooza" flashing across the marquee. 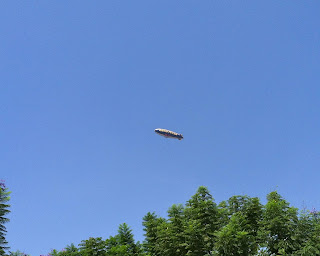 at the entrance i'd been given a wristband and a raffle ticket for a chance to win some cash in the extra money booth.  they were drawing numbers every 15 minutes-ish, but mine never came up.  boo. 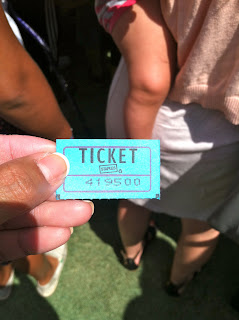 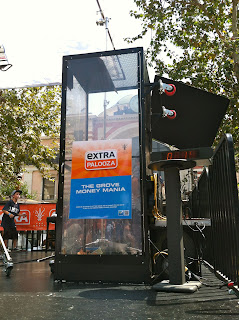 there was also free grub from several restaurants - cheesecake factory, whisper lounge, and umami burger.  i really wanted to try the latter one and had tickets at the ready, but one look at the line forming and i decided it wasn't worth the wait. 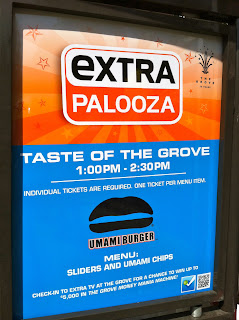 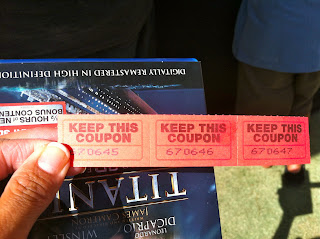 i did get lucky, however, with a couple of other giveaways.  here, a pair of earrings that i gave to the teen: 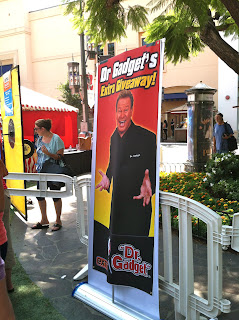 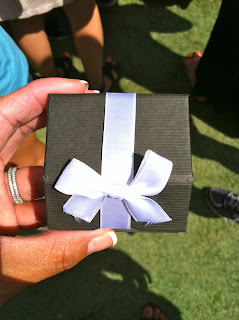 and i was amused to see the same production dude who'd been so nice to me during the port chuck/general hospital mini-concert taping. 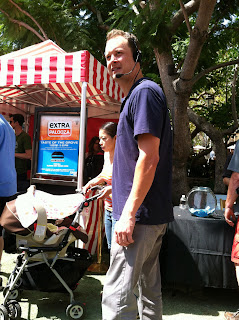 before i left, i decided to head over to umami burger to just grab some food to go so i could finally give it a try without standing in a crazy line. 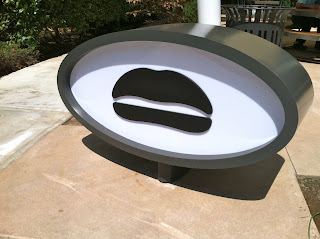 except that i was totally shut down by the chick at the hostess podium.  "we don't really do food to go," she told me.  boo.  kind of turned me off of the whole place.  seriously?  so if a patron decides to take home their leftovers (which we all know that a lot of people LOOOOOVE), they wrap that shit up in a napkin?  i'm sure they've got boxes.  but hey, whatever.  obviously, i wasn't meant to have a precious umami burger at all.

as i sat at a stoplight on the way home, i was amused to see the now-empty space where one of the most awesome afternoons of my entire life took place. 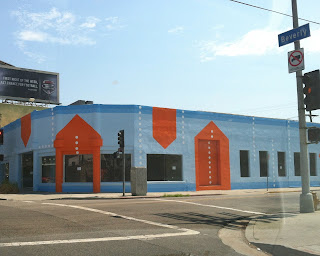 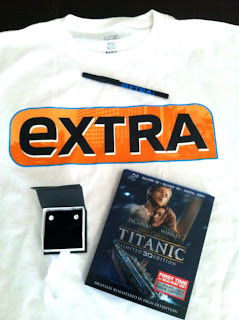 for a day or two afterwards, i totally stalked the "extra" website for extrapalooza coverage.  and i was rewarded with this clip:

i might have also set the DVR to watch me on tv.  and i found me a few different times.  i look like such a creep, lurking in the background: 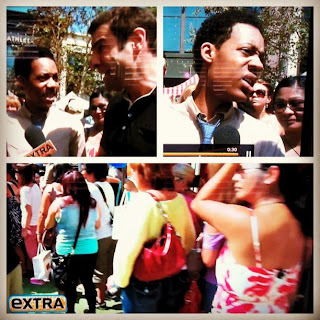 i'm just glad you can't see me sweating right through my dress onscreen.  ew.
at September 17, 2012

Email ThisBlogThis!Share to TwitterShare to FacebookShare to Pinterest
Labels: fangirling, no burger for you, the grove