so i have a fabulous plan for my birthday this year - while the girls are at school, i'm going to have a lovely, leisurely morning on my own at the happiest place on earth.  i'm going to get a birthday button, hop in all of the single rider's lines i can find, browse in the shops, munch on snacks, pose with all the characters...basically do whatever i feel like.  i'm excited!

i actually got a little sample of what it would be like when i headed down to disneyland for the health & fitness expo that kicks off the disneyland half marathon weekend.  i wanted to pick up the bibs for me and the bean (for the kids' race the day before the half) and scoop up one of those "i did it!" tees, and i knew that getting there early would insure the best selection of stuff.  then because i could...i got there with plenty of time to grab a snack and ride at least one ride.  whee!

the single rider's line for the radiator springs raceway ride was already pretty lengthy, a mere hour after the park opened.  although i was quoted an hour-long wait, i decided to go for it.  it was really the only ride i was interested in, and i had enough time to kill.  and because disney is so awesome at speeding up the wait times, i was speeding my way through the ride in 40 minutes. 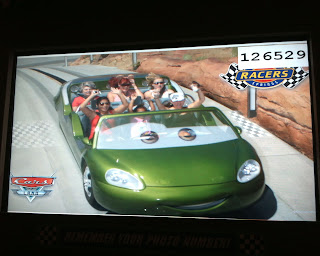 i even had time to stop at the cozy cone for a drink...in a cup that the teen and i had been waiting for them to restock for ages. 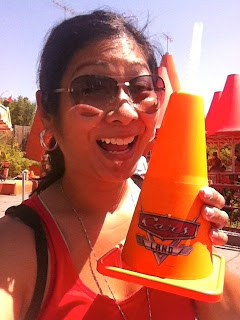 knowing that the walk from there to the expo at the disneyland hotel wasn't going to be fun - especially in the 90+ degree heat and blazing sun - i skedaddled right outta there and went on my merry way. 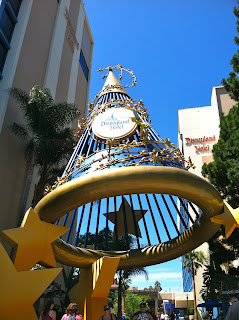 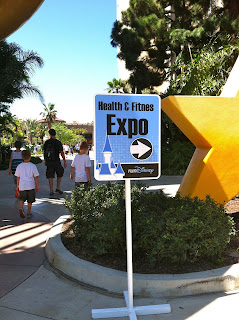 as i got closer, i spied something in the distance - something i was hoping to find somewhere around 8:30 on sunday morning. 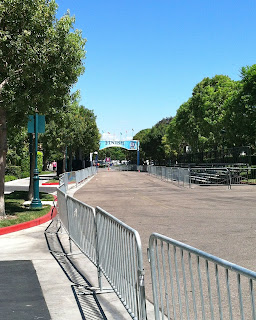 passing the entrance to the hotel, i came across a lot of excited out-of-towners who had obviously been sprinkled with magical pixie dust. 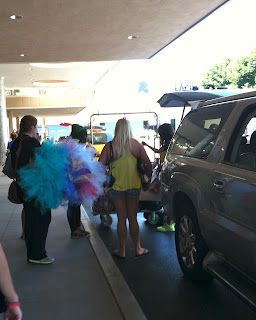 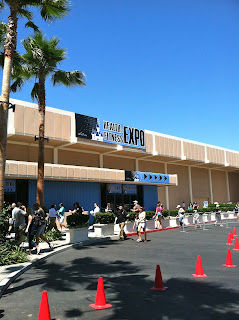 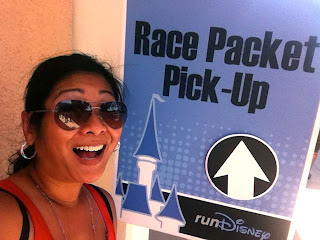 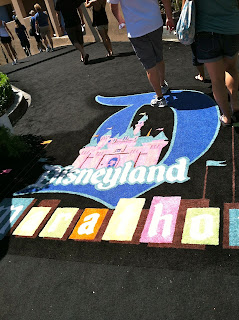 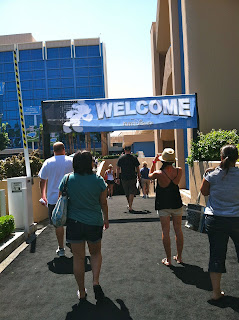 i decided to pick up the bean's stuff first. 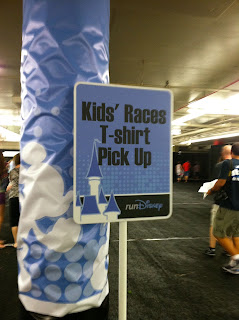 the line for my own bib was blessedly short.  and it's been so long since i registered for this thing that i'd completely forgotten that i'd ordered one of the commemorative necklaces.  don't ask me what i'm going to do with it.  i'm such a freaking sucker. 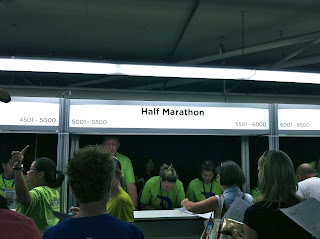 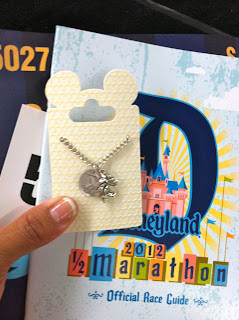 upstairs the expo awaited, along with my race shirt and goody bag. 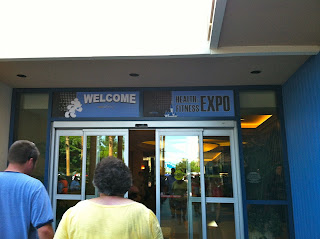 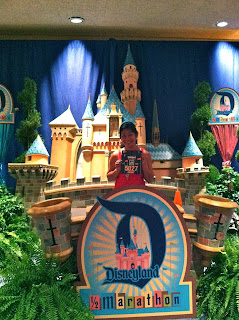 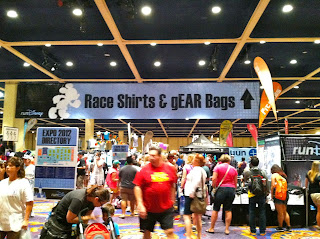 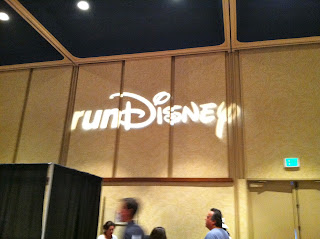 i stopped at some of my favorite vendor booths, but didn't find anything i really had to have. 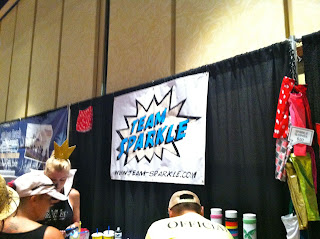 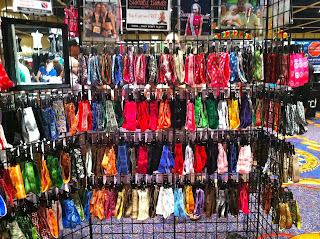 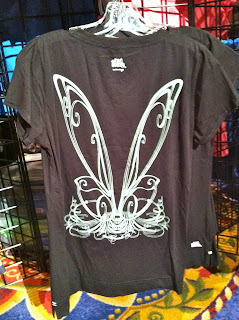 i'd registered online and printed out a coupon for a poster that i got for free.  i figured i could frame it along with my medal and hang it next to my tinkerbell one. 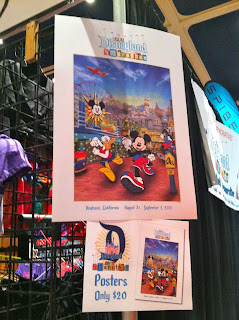 see that other medal to the right?  i want it.  it's what you earn with disney's "coast to coast challenge" - do a half or full marathon at both disneyland and disney world within the same calendar year and you get to take home extra hardware.  i waaaaaaaaaaaannnnnnnnt it. 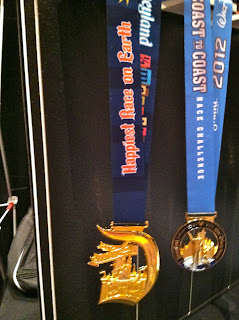 as i maneuvered my way through the growing crowds towards the official rundisney merchandise, i heard my name and found one of my nestie buddies waving at me.  it was nice to see her - we've chatted a bunch online, but i hadn't actually seen her in person since the OC nesties' fundraiser for the l.a. marathon eons ago. 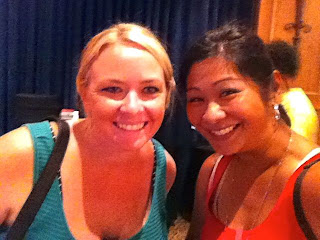 wow.  the sheer volume of folks pawing through merchandise was simply amazing.  there'd been a lot of people at the tinkerbell expo, but this was just madness. 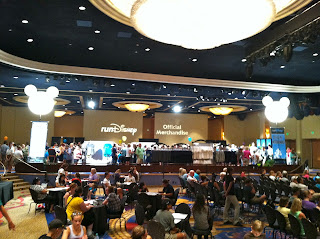 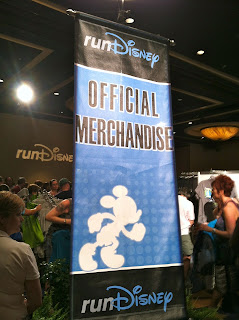 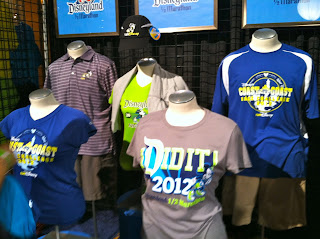 the line to pay for the stuff was incredible.  it looked even longer than one i'd stood in for a ride just a couple of hours prior.  but in true disney style, they shuffled you through it at breakneck speed and i was on my way home in no time.

but a big ass bummer - in all the chaos, i somehow set my awesome cone cup down somewhere and forgot it.  boo!  so sad.

see you again in january, disneyland hotel.
at September 05, 2012