i ain't no princess

well, at least not for the princess half.  which is this weekend.  WOOHOO!!

i'd been racking my brain for ideas on what costume to wear for the run.  because, of course, disney races always require something really fun.  i did a tiara and wings for the first tinkerbell half, dressed as lilo for the disneyland half, and a full-on costume for this year's tink.  and for princess, i decided to do something that i'm hoping will make me stand out even a little amongst the sea of belles, ariels, cinderellas et al that will fill the corrals - the evil queen from snow white.

it took me a while to make a final decision.  i perused the list of princess costumes put together by team sparkle, eyed my mad hatter costume from last halloween (which has now been set aside for the disneyland 10K in august, since it's alice-themed), and polled my friends via twitter.  the clincher was finding the most perfect headpiece via amazon (now sold out, so i won't bother to link it), along with this post with an easy-to-copy collar and cape.  it took a few clicks on the computer and one trip to joann's to get it all together.  check this out (yes, i know the apple should be red.  green's all i had in the house): 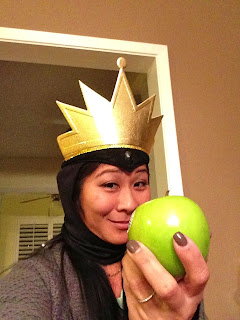 using the measurements on the post, i drew and cut out a pattern piece for the collar and busted out my rotary cutter on some white costume satin and a piece of ultra rigid interfacing.  i altered the design a little so it wouldn't look so snow white-y. 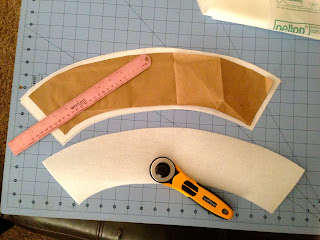 and it was easy peasy - i just sewed up the sides and top, flipped it right side out and pressed it with my iron.  i took a length of black sparkly fabric, gathered it at the top and then attached it to the bottom of the interfacing before inserting it into the satin collar and sewing the bottom.  the last step was tacking down the sides to the shoulders of my purple tank. 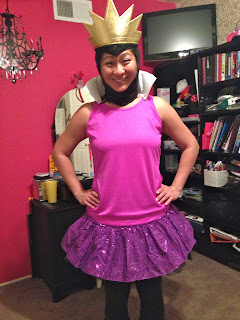 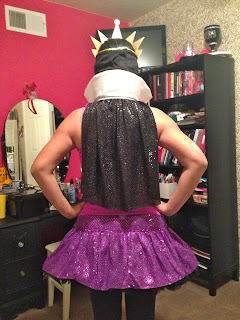 because i'm fancy, i threw a black tutu underneath my purple sparkle skirt.  i'm also going to somehow create a medallion to mimic the necklace that the evil queen wears.

but i make a lousy evil queen.  i can't help but smile in this getup, and being at disney world isn't going to help to wipe that stupid grin off my face.  it'll have to do.
at February 21, 2013

Email ThisBlogThis!Share to TwitterShare to FacebookShare to Pinterest
Labels: caught the sewing bug, running my ass off, wan is not evil