the student becomes the teacher

i was browsing through pinterest one day when i came across something that i thought was pretty freaking genius: 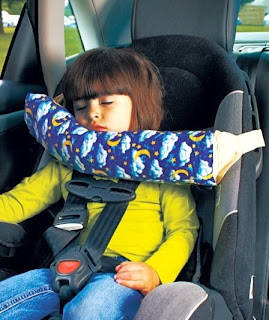 the bean often falls asleep in her car seat, and because it doesn't recline for naptime like her last one did, she usually ends up slumped forward in a really uncomfortable-looking position.  we try to push her head back into place, but as soon as we get her adjusted that heavy nugget just falls right back over again.  except that when i clicked through to the site to see how i could order one of these things, it was no longer available.

so i did what any of you would have:  i made my own.  and you can too, if you want.  it was totally easy, and i'm all stoked and proud to actually have created my very first sewing tutorial!

i checked out my extensive stash and picked out a length of fabric left over from a previous project, in a print i knew the bean would dig: 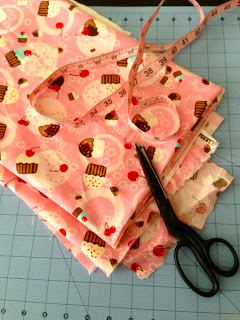 measure across the front of your kid's seat to see how long you want your pillow to be.  the bean's was about 17", and i wanted the pillow to be about 4" wide.  so i cut out a rectangular piece that was 18" x 10", adding in a bit for seam allowances and such.  then i measured around the back of the seat from one side to the other, which came out to be 24".  as i inspected the photo of the original pillow, i decided that i didn't want to mess with velcro and decided to tweak it a little, instead going with an elasticized strap that could fit snugly around the seat (and hopefully, that of the airplane we'll be boarding in a few days).  so i cut a long strip that ended up being about 48" x 2".  and then i looked at the photo again and just kind of finagled a paper pattern for the piece that would be attached between the strap and the pillow itself.  now that i've thought about it a bit, it really wasn't necessary.  i could've just sewn the strap to the pillow ends and it would've been just fine, but i wasn't thinking straight. 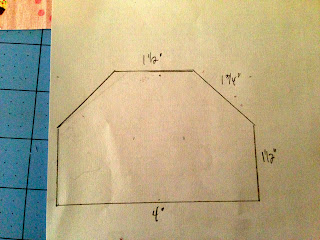 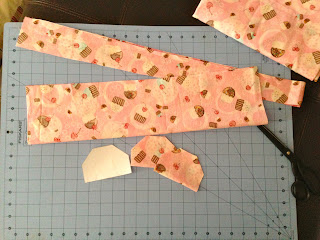 now that i had all the pieces cut out, i had to put on my thinking cap to figure out exactly how i was going to assemble this thing.  i always start off super confident that whatever i'm making is gonna be really easy, until i jump right into the project and end up making sweet, sweet love to my seam ripper.  i didn't want to have to do that this time, so i took my time and worked slowly.

the first logical step was to sew up the strap.  i took that piece and folded it in half, right sides together, and sewed it right down the edge. 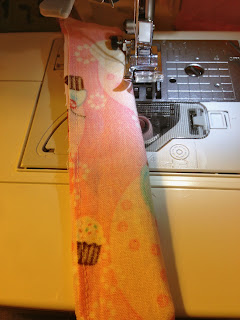 the worst part of working with a strap this long is getting the stupid thing flipped right side out.  luckily, i bought one of these handy-dandy turning tools a long time ago.  i slid it in, used it to grab one side, and started flipping this bitch over little by little. 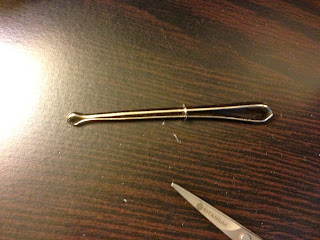 if you don't have one, GET ONE.  trust me.  and when it was pulled out all nice and pretty, i turned my iron on high - with steam - and pressed it flat. 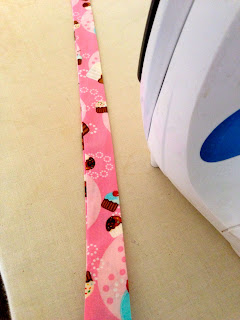 the next step was getting the elastic in there.  i cut a piece that was as long as the measurement i'd taken from the back of the seat and added an inch just for good measure.  using my handy-dandy turning tool, i pushed it through the strap, making sure to pin it at the end to keep it from moving. 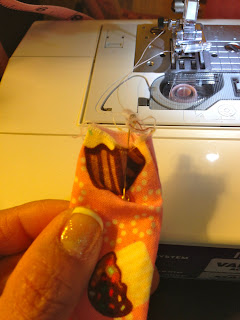 then i sewed the ends securely in an X, like this: 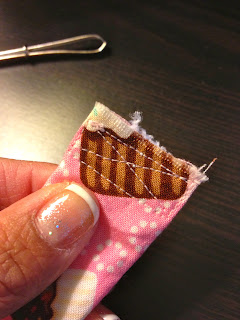 now, when i cut out those attachment pieces, i did so on the fold thinking i'd save myself a step.  except that it didn't quite work out that way, and i ended up cutting them in half. 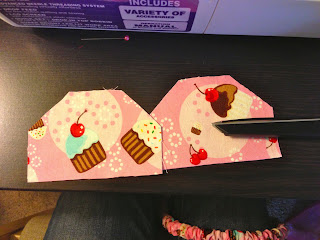 i stitched the sides of the attachment pieces right sides together, leaving the top and bottoms open.  then i fed the end of the strap through the bottom, pulled it a little bit out of the top, pinned into place and sewed it up. 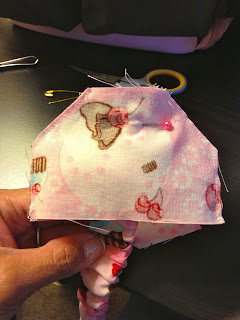 when both sides were done, i flipped them right sides out and pressed them flat and moved on to the pillow part.  folding it in half the long way with right sides facing, i stitched all the way down the edge. i would come to regret this later. 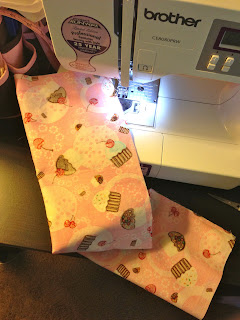 i decided the seam would be best placed in the middle of the back, so i adjusted it a bit and then ironed it out.  i dropped the strap with the attachment pieces inside and pinned one side into place.  i stitched the end shut and zigzagged the edge just for good measure.  plus it looked neat and pretty that way. 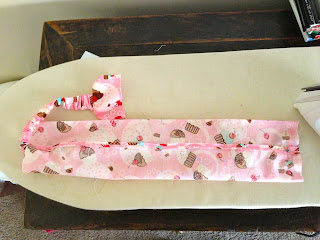 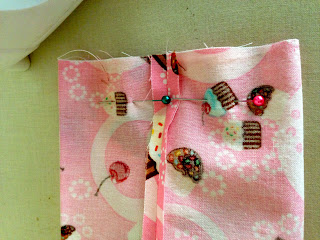 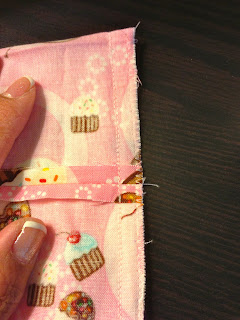 this is when i realized the error of sewing the entire pillow seam.  i had to leave an opening somewhere to turn it all right side out, and duh - how did i think i was going to stuff the damn thing?  so out came my pretty pink seam ripper for a little exercise. 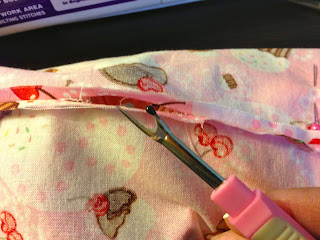 with that problem solved, i sewed the other end of the pillow shut, securing the strap inside, and carefully pulled it out of the hole i'd created in the seam. 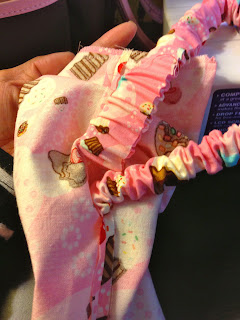 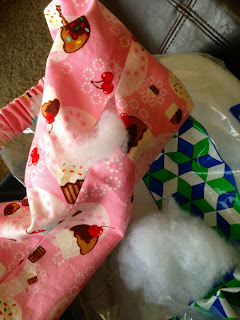 i've never learned how to the slipstitch/invisible stitch that would come in really handy for projects like this.  countless tutorials and several youtube videos later, i'm still totally in the dark about how to accomplish it.  so i made do with my sad hand-stitching skills and closed up the seam my way. 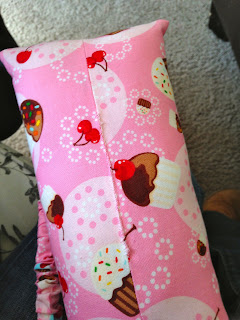 it ain't pretty, but whatever - it's the back of the dang pillow anyway.  who cares?

the bean was a little puzzled over what the hell i'd just spent the last couple of hours slaving over until i showed her the original photo.  and then she was really excited to hop into the car and test it out. 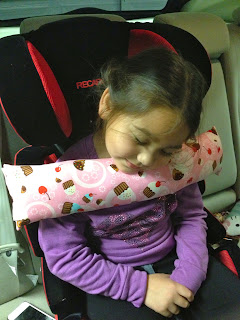 and wouldn't you know it - even after my careful measuring, the stupid strap ended up being too stinking long.  the elasticized feature doesn't even come into play here.  i suppose i'll have to take it apart at some point and shorten it a little to make it fully functional, but for now it'll do.

lest you think i'm creative in any way, just google "car seat pillow tutorial."  i am so not as original or unique as i thought i was.  dammit.  and this is definitely not the best, most educational, clearly-explained sewing tutorial on the face of the planet.  i hope it helps someone anyway - but hey, don't be an ass and use my sad little set of instructions to start cranking out these things for sale, yeah?

because that would not be cool, yo.  not to mention, who knows if the original manufacturer of this thing has a patent or some sort of legal strings attached to it?  i sure don't wanna get sued, and i wouldn't want to see you have to hire a lawyer, either.