i will shank you with my 5K medal!

this time, it was the first-ever live ultimate run in santa monica.  i'd actually signed up for this via one of those deal-a-day websites...back in june.  crazy, right?  in fact, mr. lilcee and mr. winnie had forgotten we'd even registered for the damn thing until just a few weeks ago.  and then my friend interview (who is cousin seven's ex-boyfriend from high school) decided to join in the fun too.  he's been doing some pretty crazy training and got himself down to a 7-minute mile.  i can't even imagine.  so he decided to strut his stuff for this 5K and see if he could finagle an award.

he was so excited for this race that he got down there super early - like, an hour before the bib pick-up was even going to begin.  silly boy.  and after dropping off the bean with lilcee to hang out with mini cee (and head down to disneyland for a playdate), mr. lilcee and i carpooled and managed to arrive a full hour before race time.  despite our worries about finding parking, it was easy breezy.  and interview had picked up our bibs and tees for us.  it wasn't very busy. 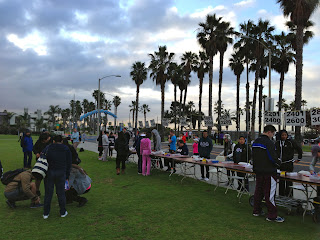 the start line was all decorated in the live ultimate colors. 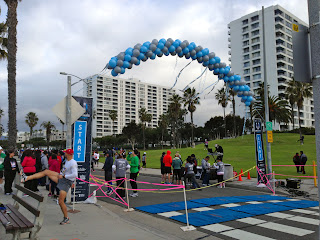 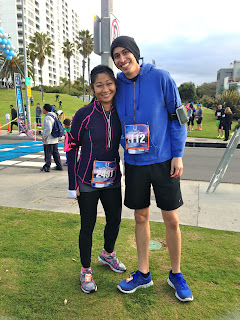 only in santa monica would they use a lotus for the pace car. 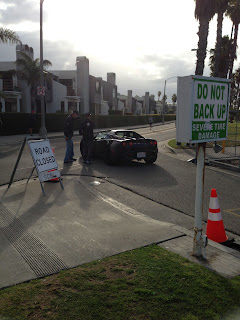 the national anthem was sung by missy aguilar, who mr. lilcee recognized immediately as a friend of his (and who also sang at his and lilcee's wedding).  she did an awesome job, and then the organizer of the run came out to say a few words. 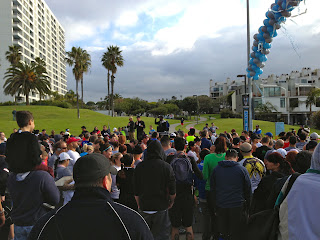 the course was a really good one, running along main street before curving down towards the beach.  i didn't take a whole lot of pictures as i was really focused on the run, but i did pause for a second for this (admittedly not very good) shot of the famous sign at the pier. 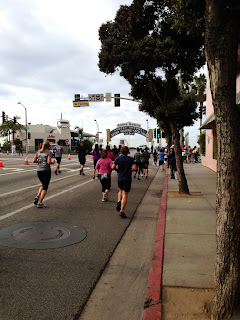 as with last week's run, when i caught sight of the finish line not too far ahead, i got a crazy rush of adrenaline.  when my nike+ app told me i was hovering just above the half-hour mark, i sprinted like mad in the hopes of crossing the finish before i hit 30 minutes.  sadly, i didn't manage to PR this time around, but 30:21 isn't too bad, right?

and just as i was catching my breath, i spied some familiar figures heading my way.  ken and sabrina are the race directors for the hollywood half (as well as the awesome 80s 10K i did in october and a few other races too), and i chatted with them for a few minutes.  they're such a nice couple, and i really like them. 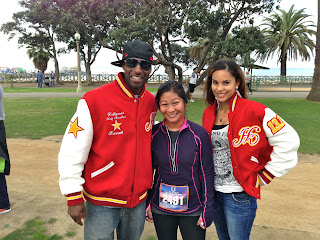 i caught up with interview too, and we got someone to take the "after" shot for us. 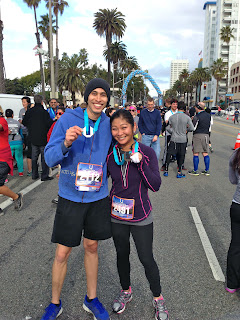 i like the unique shape of this medal, although those corners are pretty stinking sharp.  if i ever need to shank someone, i know what i'm gonna reach for. 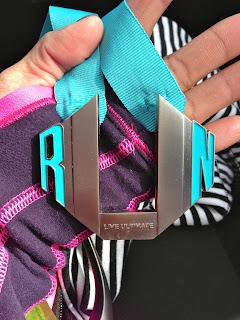 mr. lilcee and mr. winnie, who'd done the 10K, found us when they finished.  we headed down towards the pier to check out the expo and then make our way back to the parking lot.  i love the santa monica pier, as cheesy as it is.  and i have fond memories of the bean's first birthday party in this building: 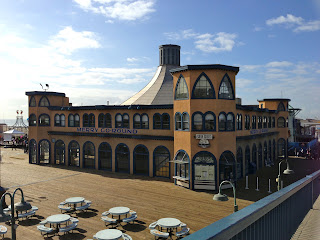 at the expo, we grabbed some recovery drinks and samples of granola and power bars. 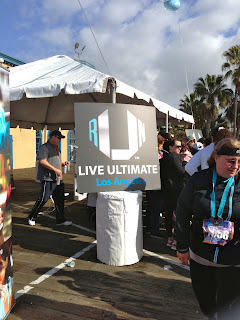 there were lots of folks crowded around the tent where the final results were posted. 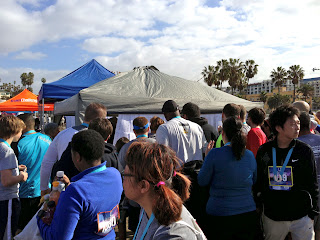 while mr. lilcee went over to missy aguilar to say hello, i decided to check out my official finish time.  i was pleased to find that it was just a couple of seconds off from the time reported by my app, and even more so to see that i'd placed #6 for my age group.  not fast enough to actually win anything but bragging rights, but i'm good with that.

and then it was a mad dash to get home, clean up, and meet up with lilcee and the girls down at disneyland for an afternoon of fun.  i sure do love packing in as much action in my weekends as i can, huh? 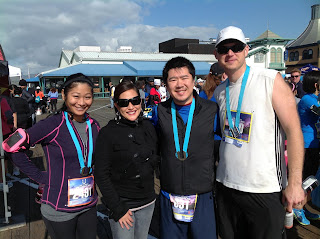 Email ThisBlogThis!Share to TwitterShare to FacebookShare to Pinterest
Labels: disneyland, medals rock, running my ass off