after totally missing the entire month of july in the 5K department, the hub and i rallied with a super hot loop around the rose bowl along with about 3,000 other folks at this year's awesome 80s run. 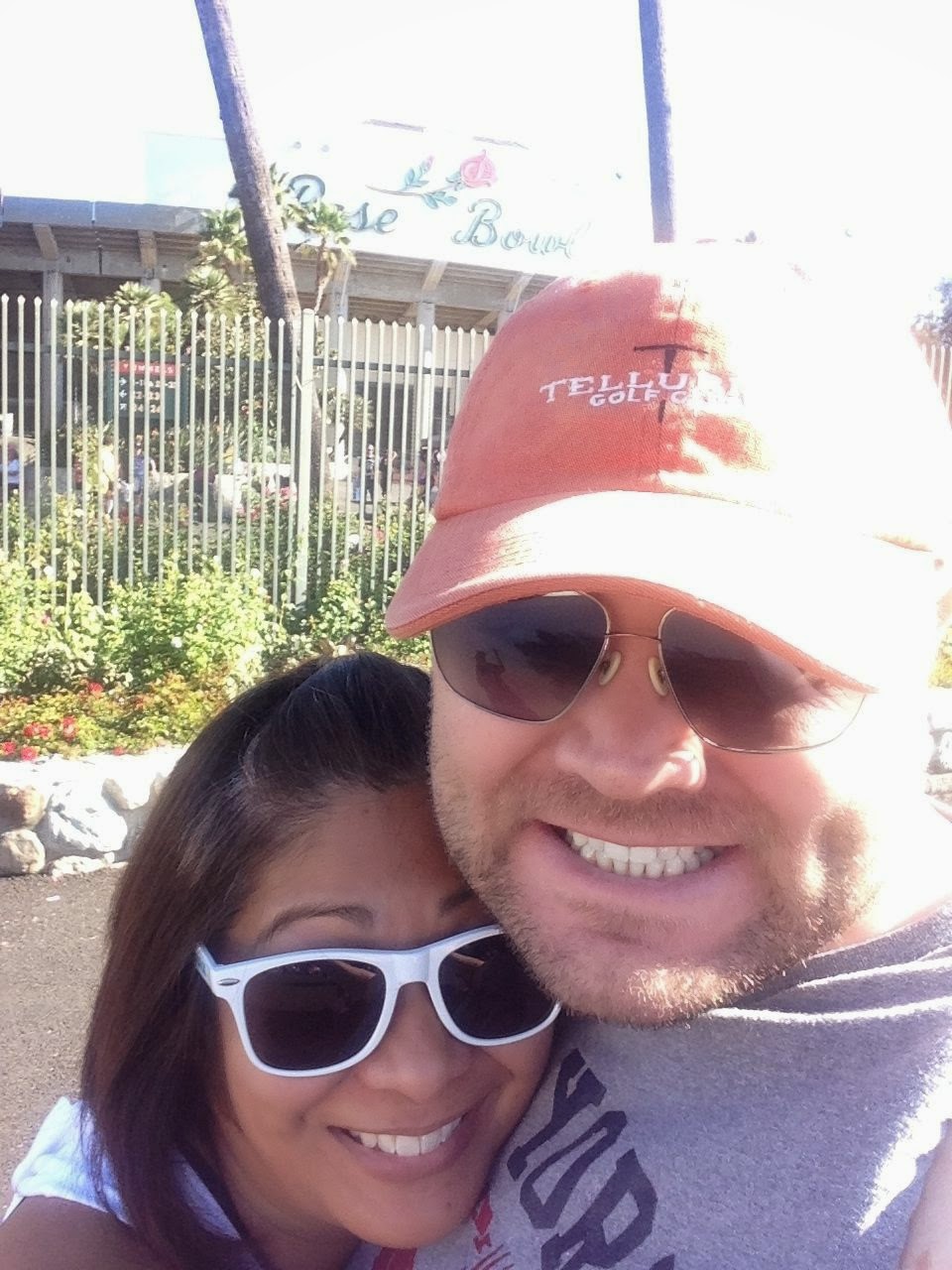 this is my 3rd year in a row doing this race, and it just seems to get more and more popular and...well - awesome - every time.  although i didn't get around to putting together an actual costume this time around, i did dig out last year's t-shirt and chopped it up to make it into a tank top.  with a sparkle athletics skirt and a pair of cheesy sunglasses, it was good enough for me...especially since the hub literally rolled outta bed and just wore what he already had on.  i'm lucky he still does these monthly races with me at all.  ain't no way i'm gonna get any sort of a costume on him.  although he seemed fairly amused and entertained by the antics of everyone around us.

we caught a glimpse of the famous delorean from "back to the future," but the line to take pictures with it was ridiculous.  the hub's not really all about the photo ops to begin with, plus it was out in the blazing sun.  no way, jose. 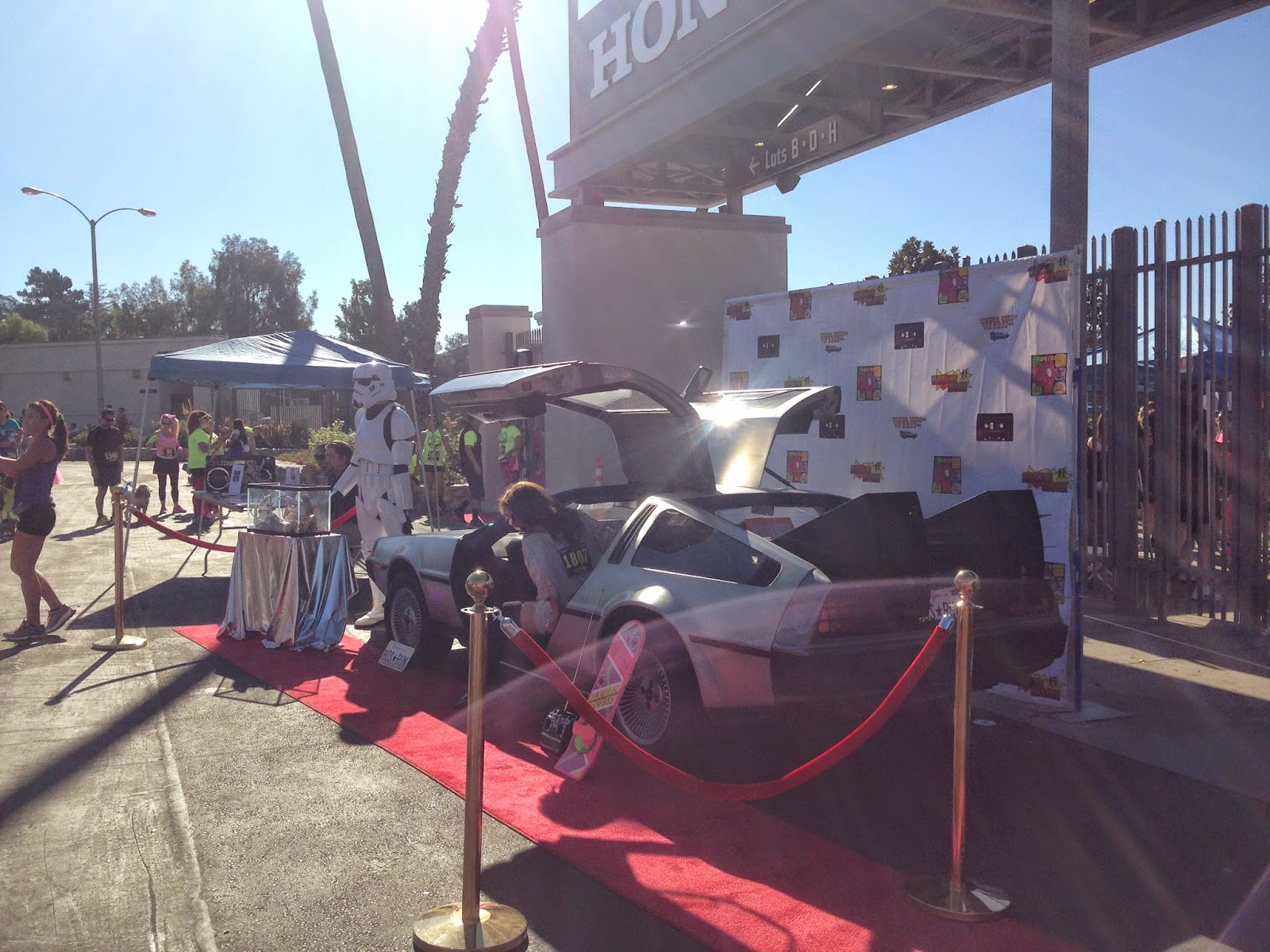 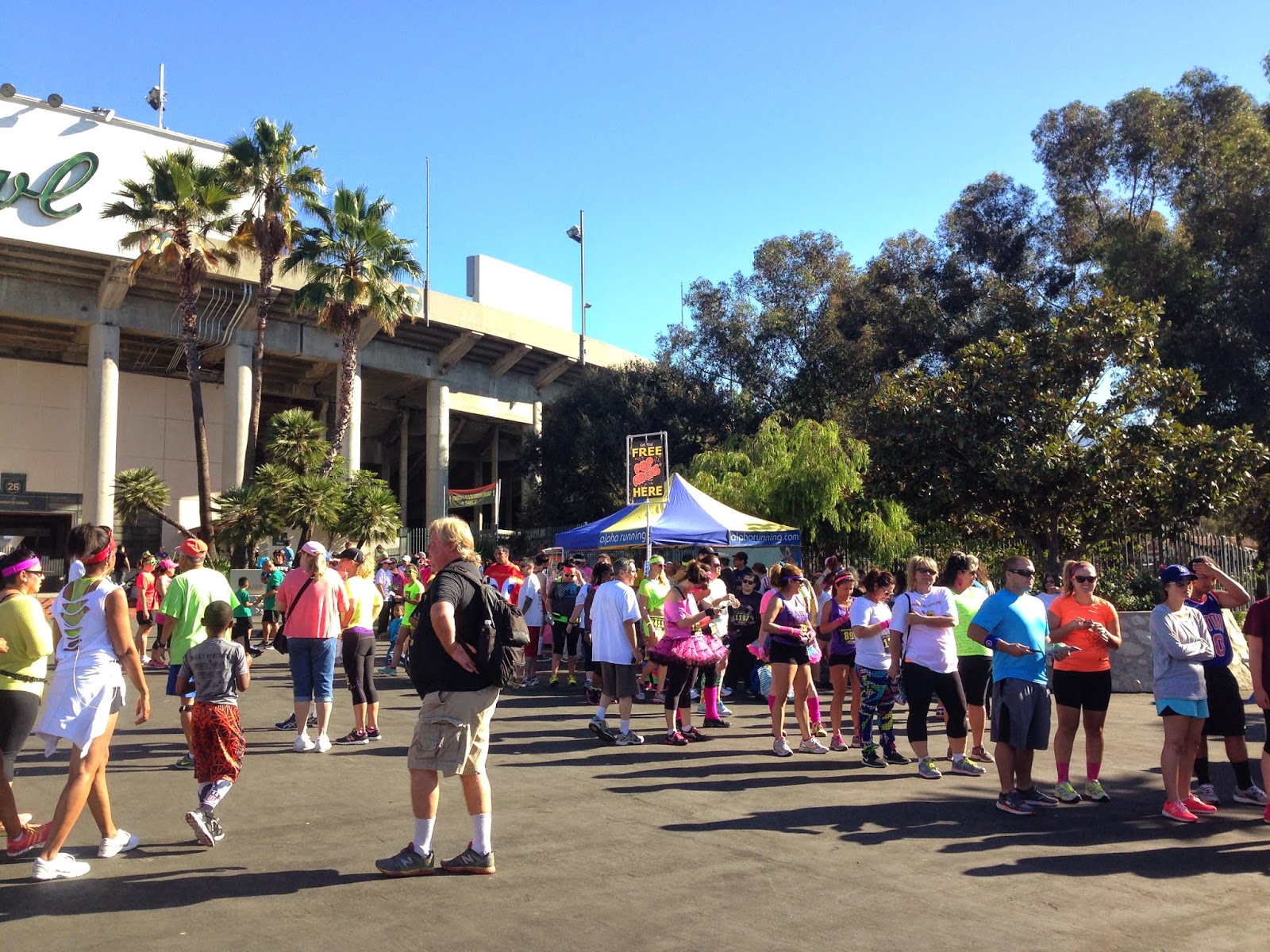 instead, we found a shady spot right at the start line, did a little peoplewatching and listened to the awesome 80s music that blared from the speakers. 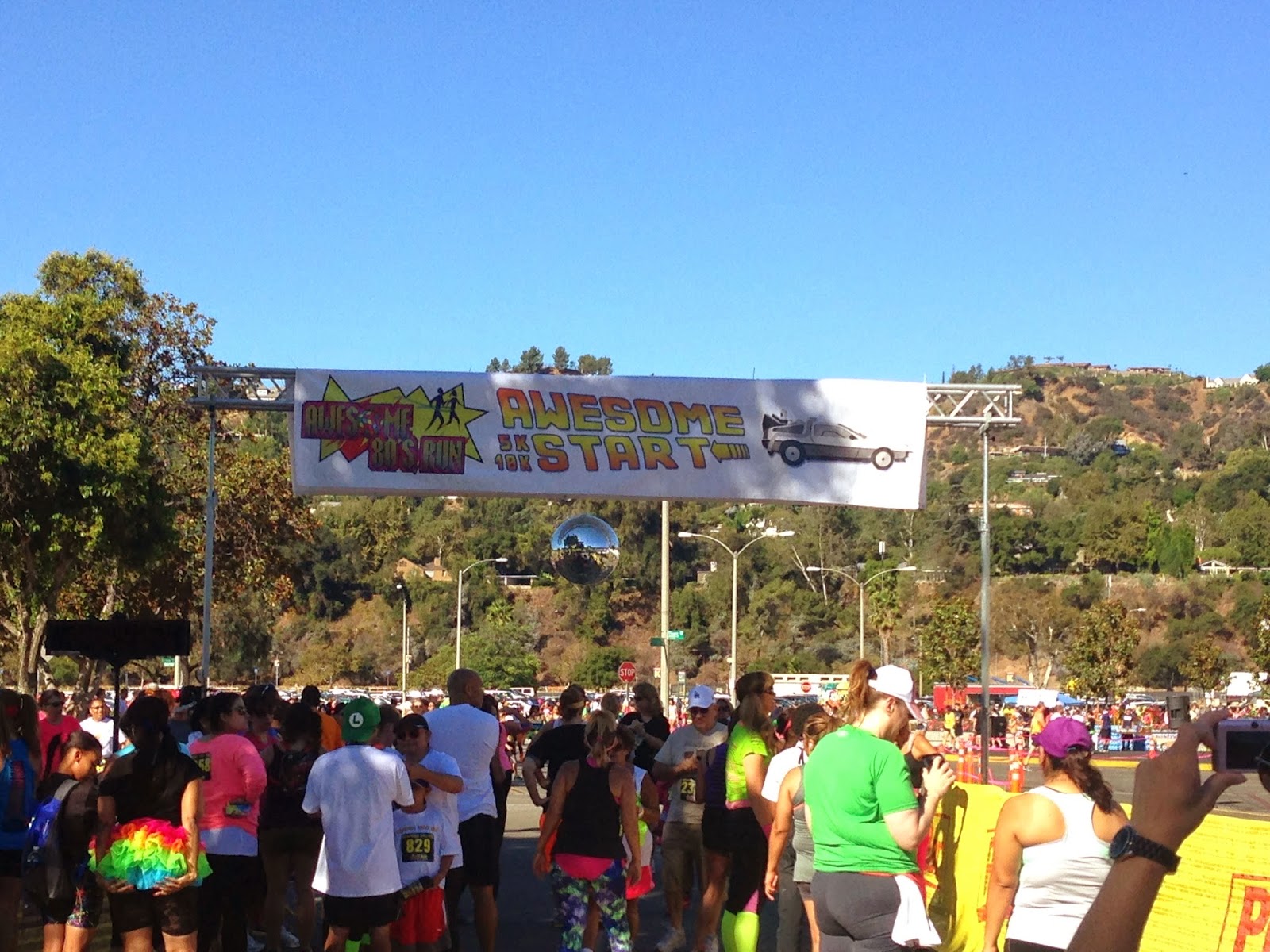 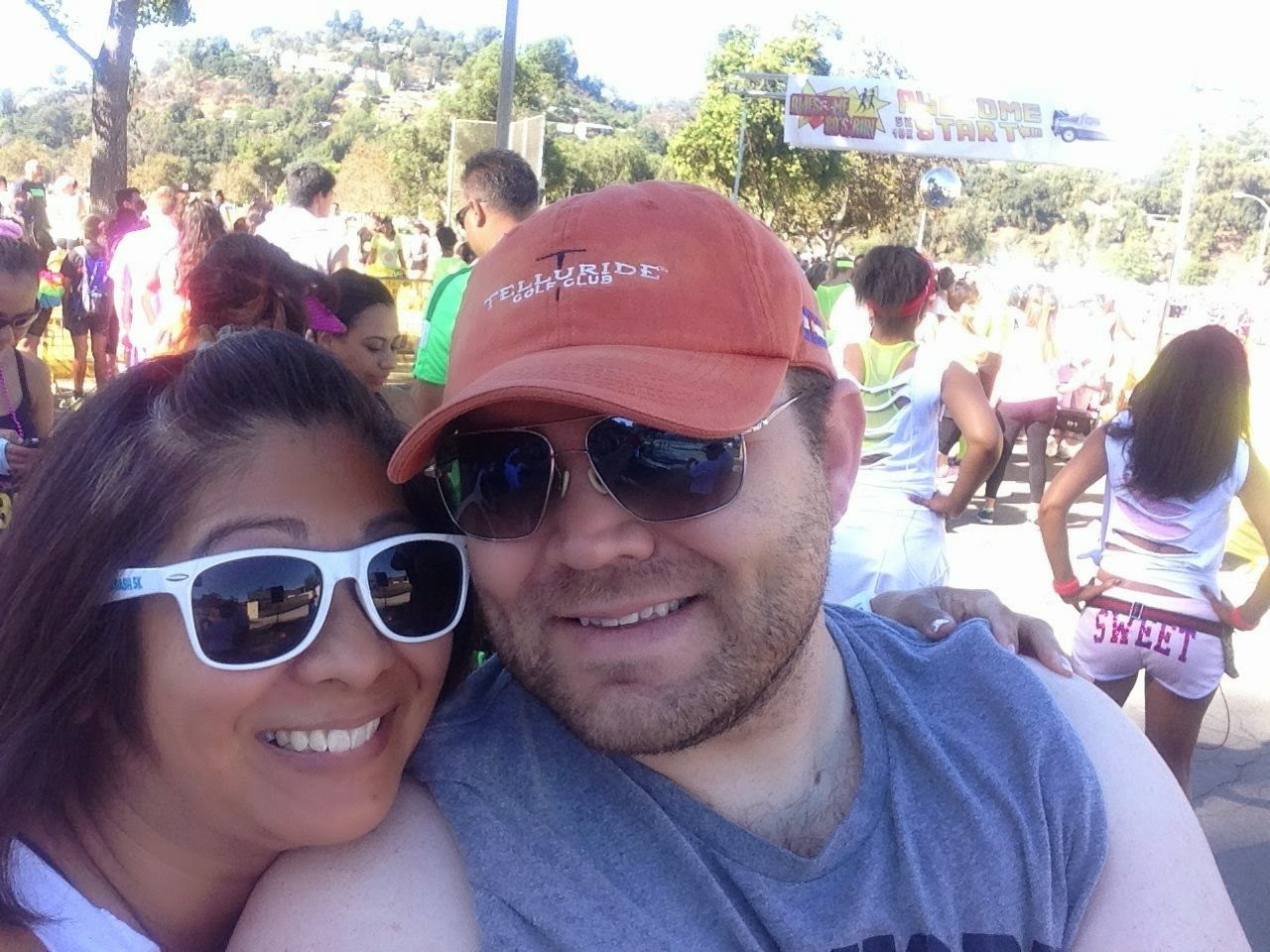 the will call booth from the last big concert here still had some signage in place. 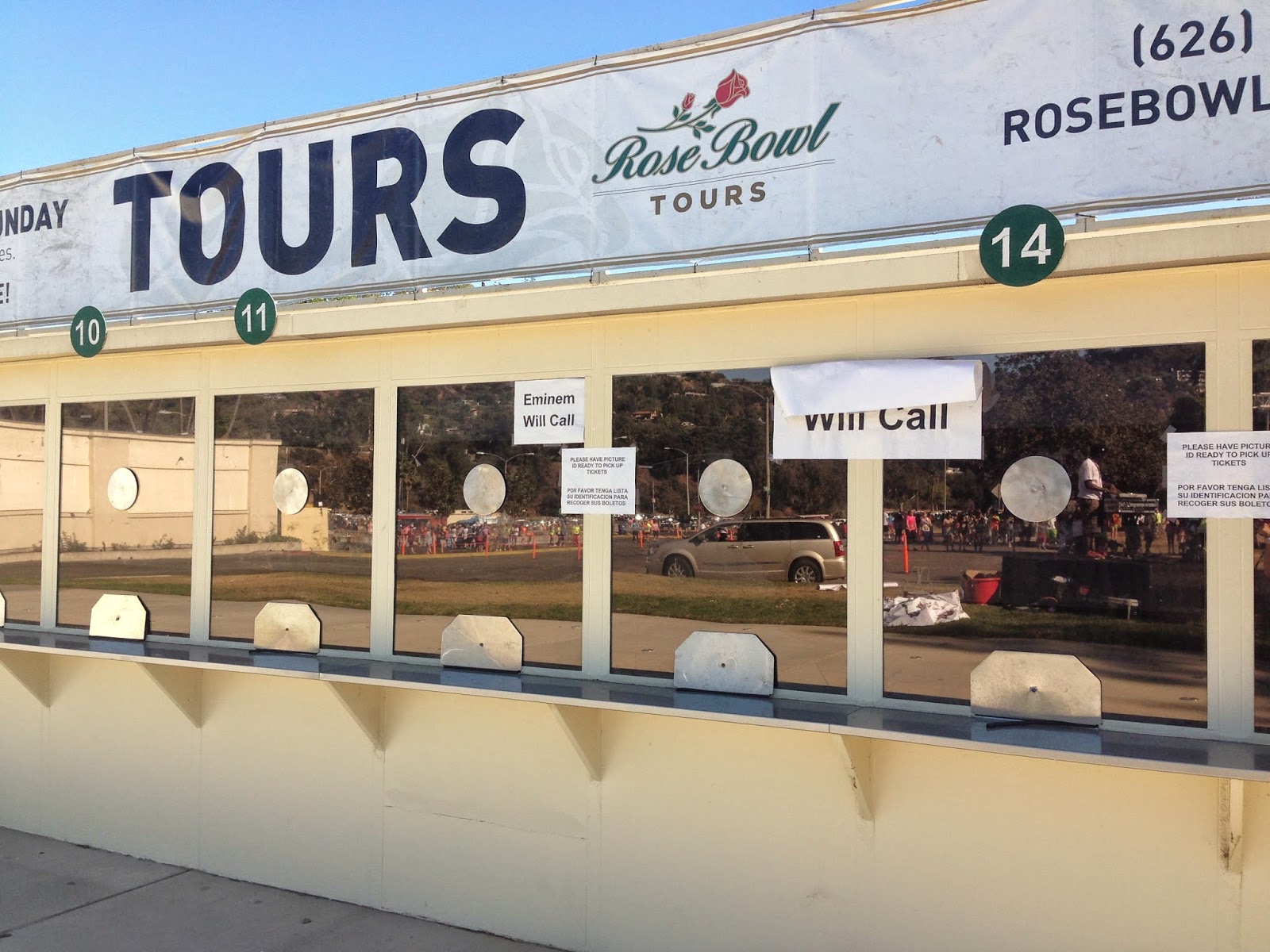 after a warm-up and some stretches led by announcer extraordinaire run-mc, "michael blackson" took the stage to welcome everyone and make a few announcements. 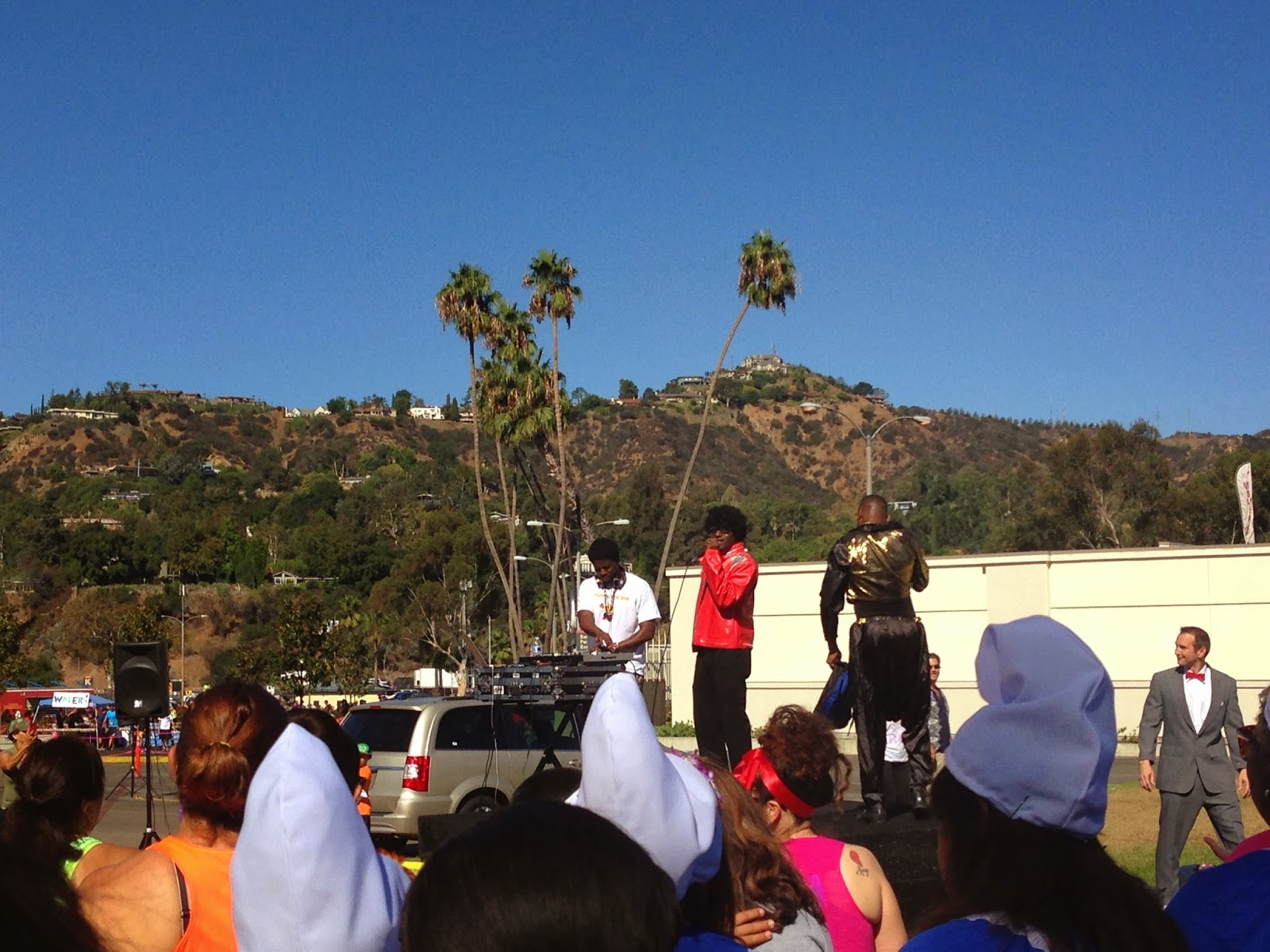 he brought up on stage a couple of folks who had a little part in 80s culture - tami erin, who'd played "pippi longstocking" in a movie remake and jeremy miller, who'd played the youngest seaver sibling on tv's "growing pains." 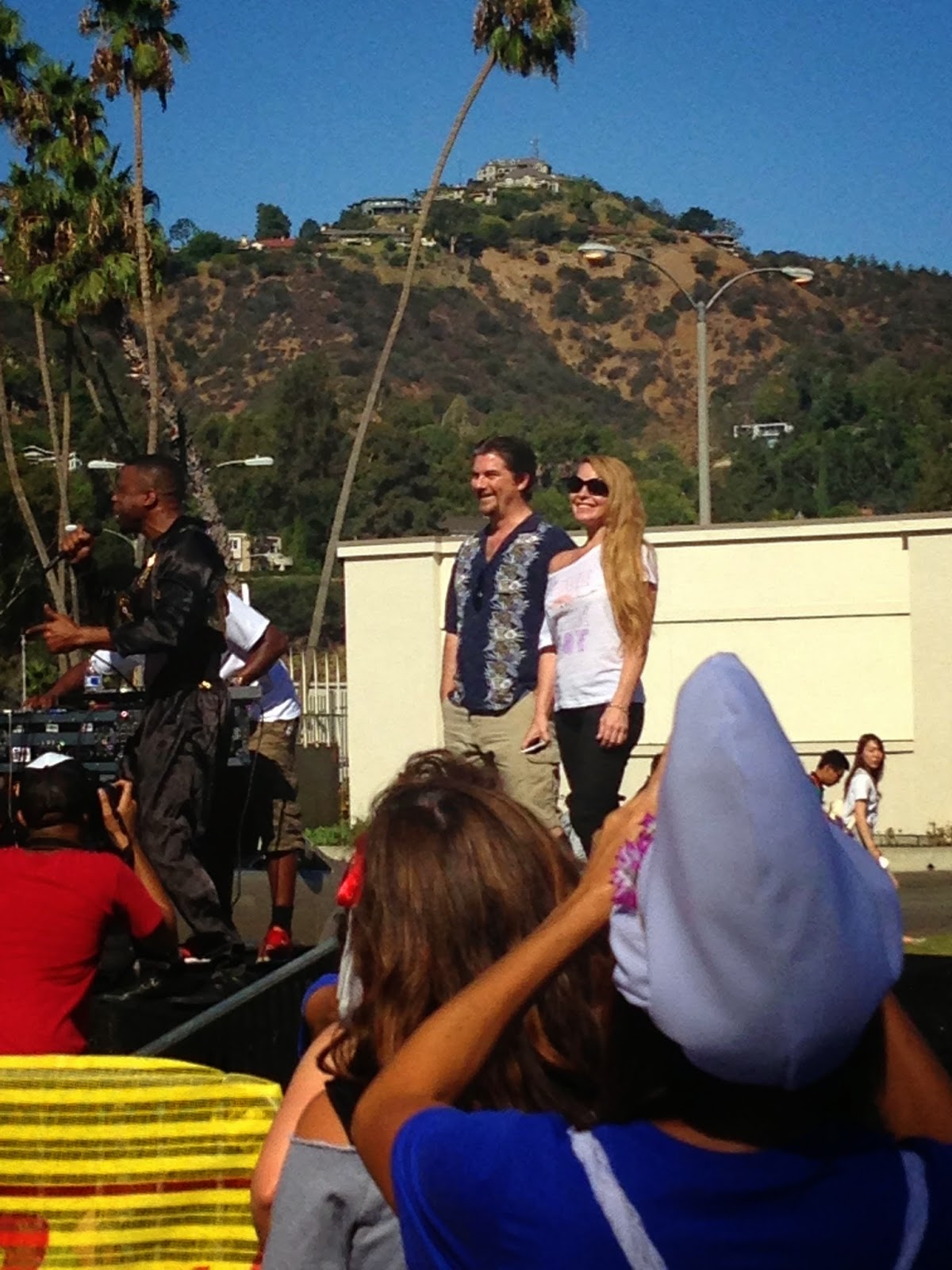 this dude had been making the rounds through the crowds, dressed only in a speedo and making a spectacle of himself.  he managed to hop up onto the stage, where everyone avoided touching him as much as possible.  heh. 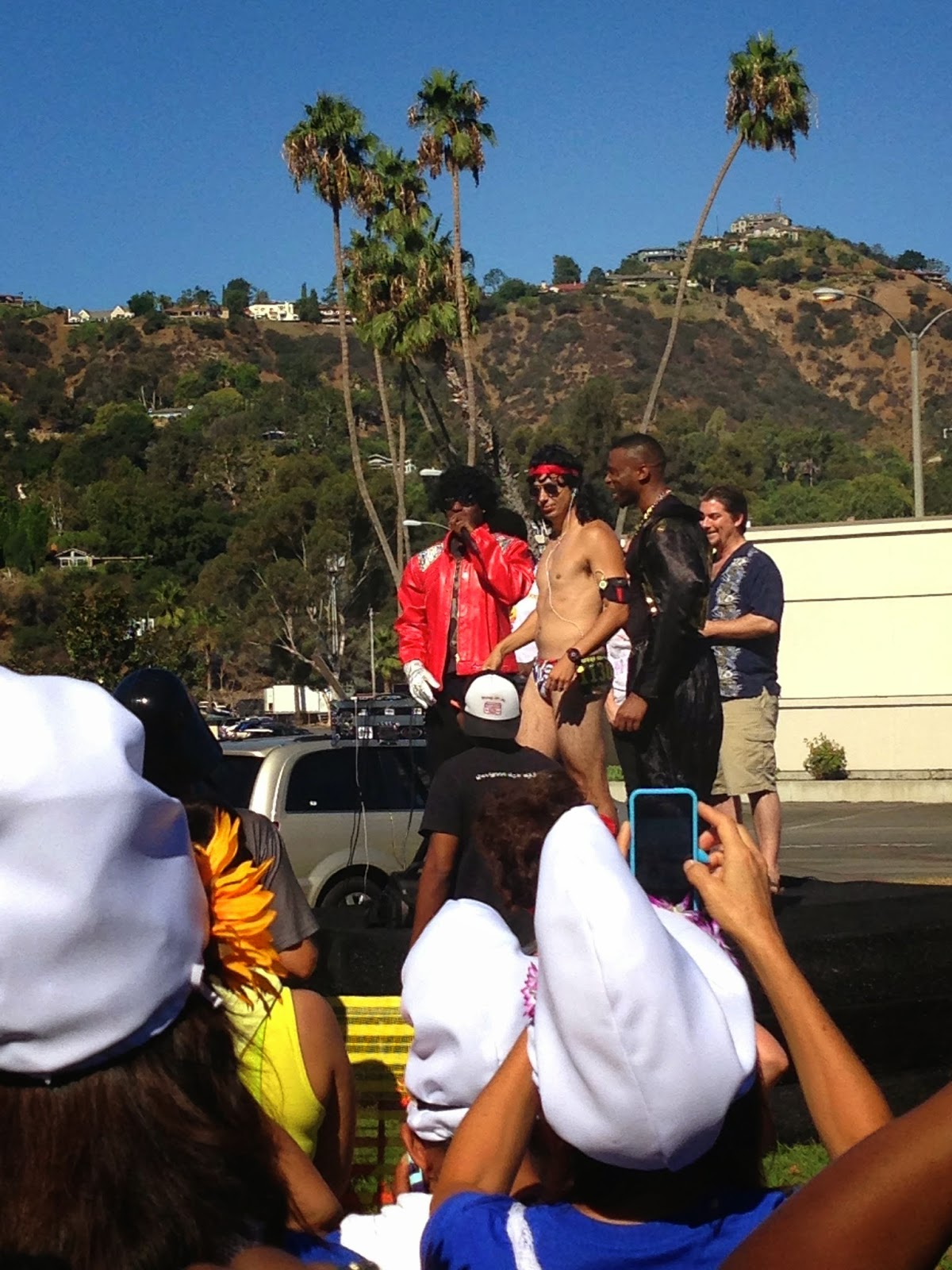 as the temperature continued to rise, the gun finally went off and we started our sweaty journey around the rose bowl.  i've run this loop quite a few times before - sometimes this is where i go to do a long run.  3 loops - 9 miles, easy peasy.  as we took off, i got stuck behind a crowd of people while the hub managed to maneuver his way around them and got a pretty good head start on me.  i figured this was finally gonna be the race that he'd beat me in, although that pesky only-child syndrome kicked in and i did my best to catch up.

mile 1, and i couldn't even see him anymore. 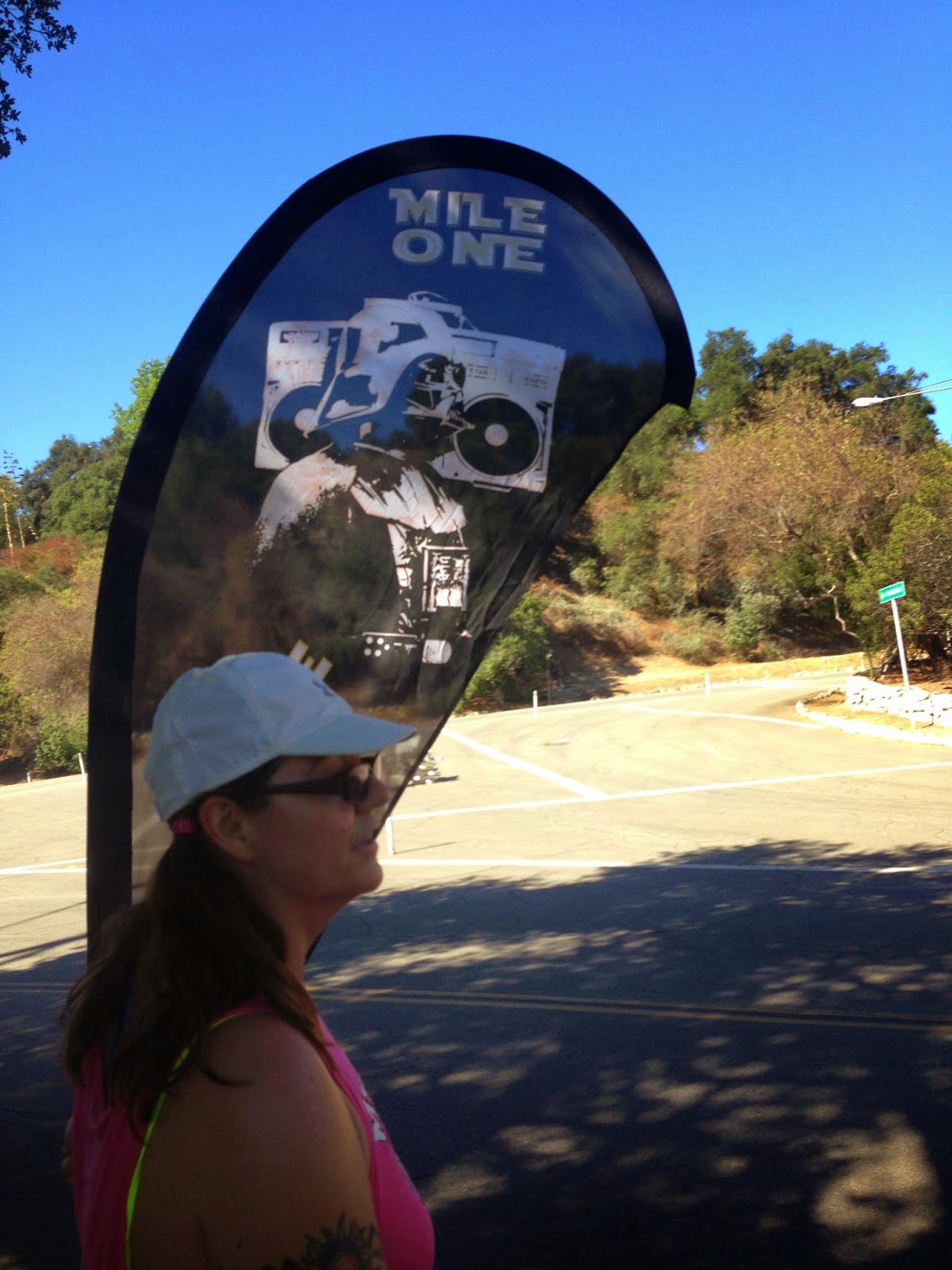 just before mile 2, i finally caught a glimpse of him still way ahead of me, and clearly not taking any walk breaks like i was.  i haven't been as consistent with my training runs since summer began, and it showed.  not to mention, i just don't function well in heat like that.  excuses, excuses.  ha. 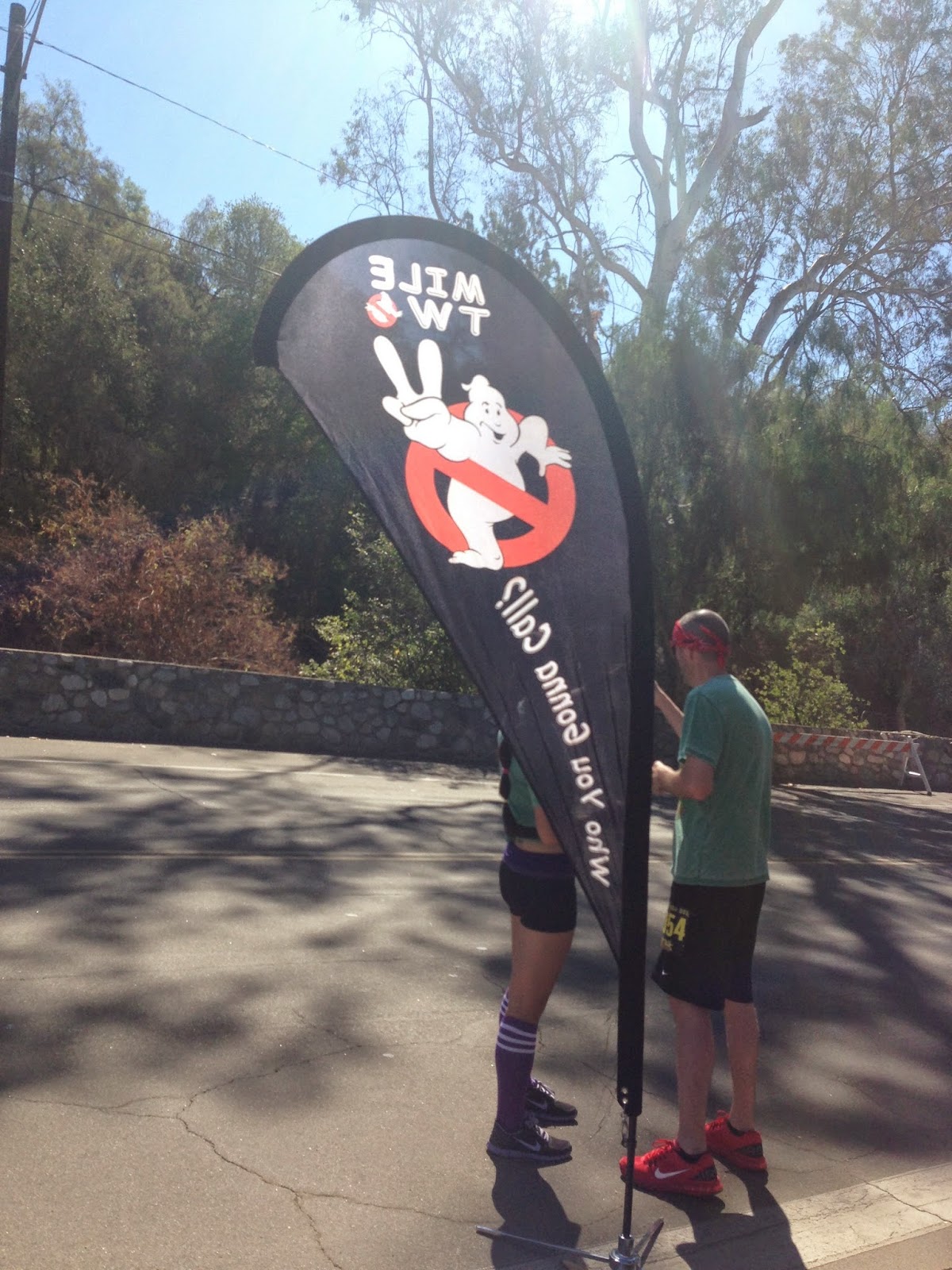 with about half a mile left on the course, i saw him again just ahead of me.  he'd finally slowed down and taken a walk break, and that's when i finally caught up to him.  i was pretty excited that we'd get to cross the finish line together at last. 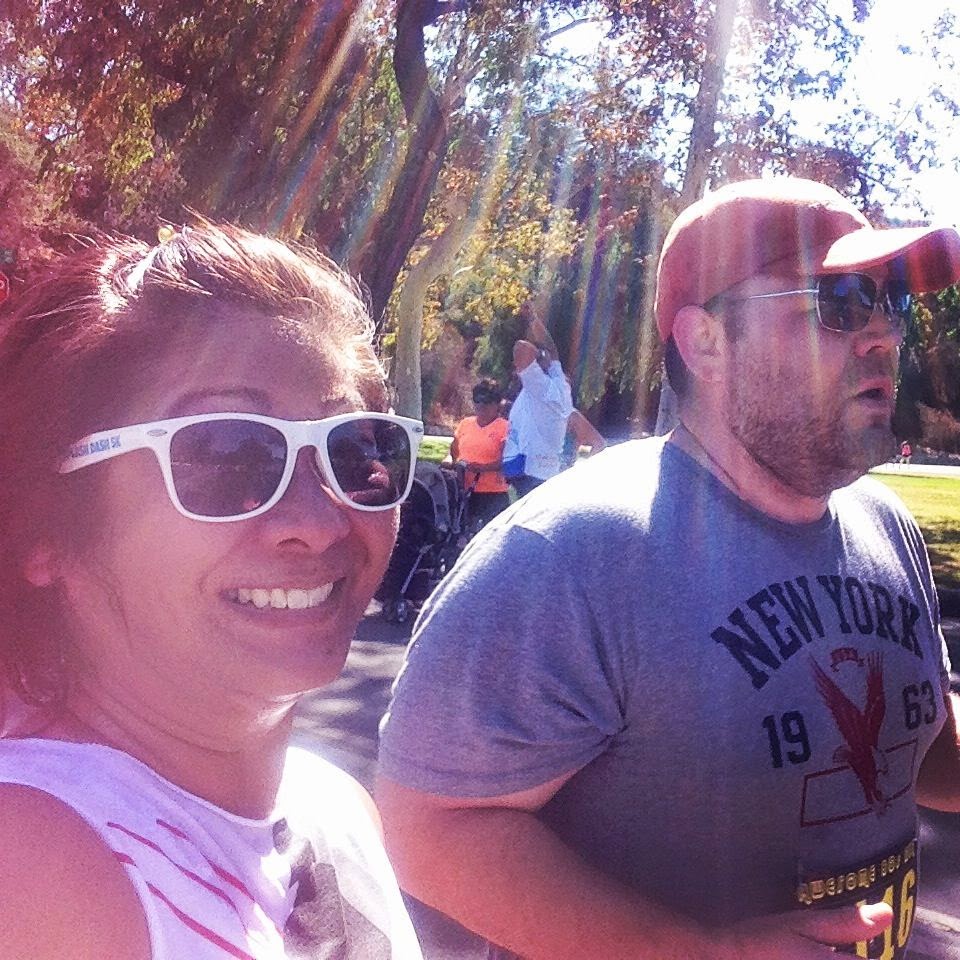 while i joined the line to grab my finisher's medal, he opted to head straight to the water tent, where he picked up a cup for me to drink and poured the ice cold bottle on both of us.  while he was grabbing his own medal, i managed to snag my friend ken, aka "michael blackson," for a quick selfie. 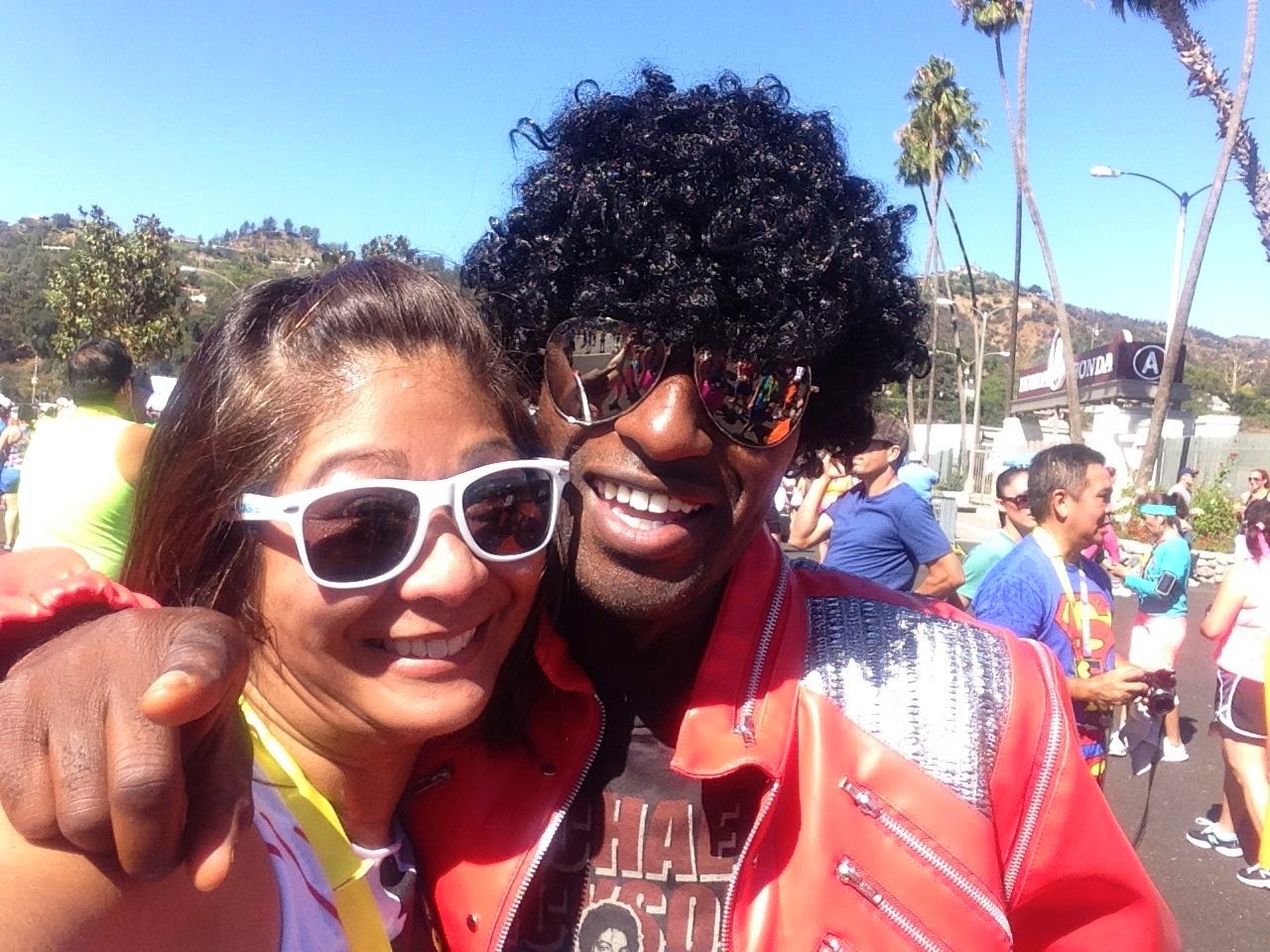 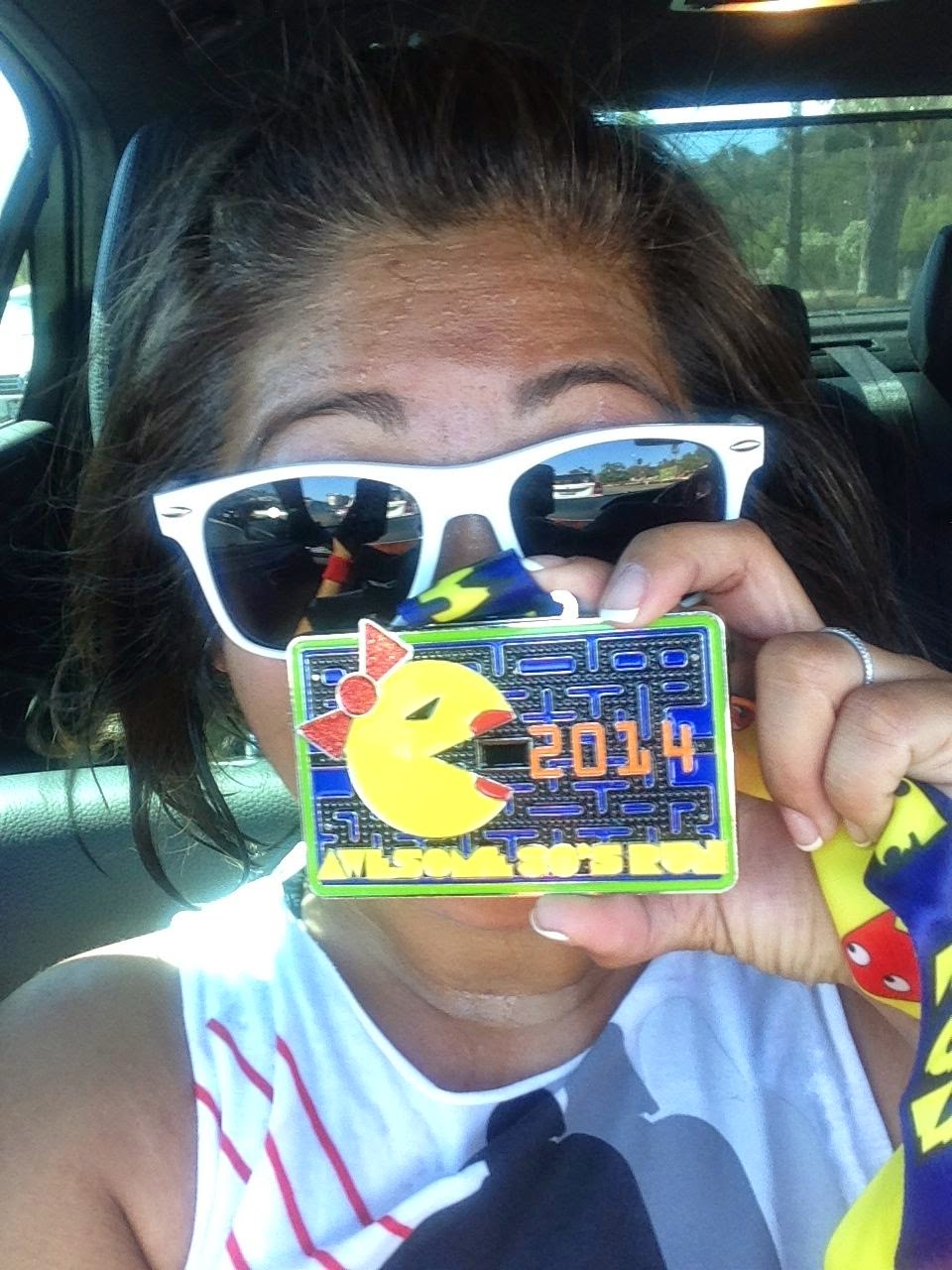 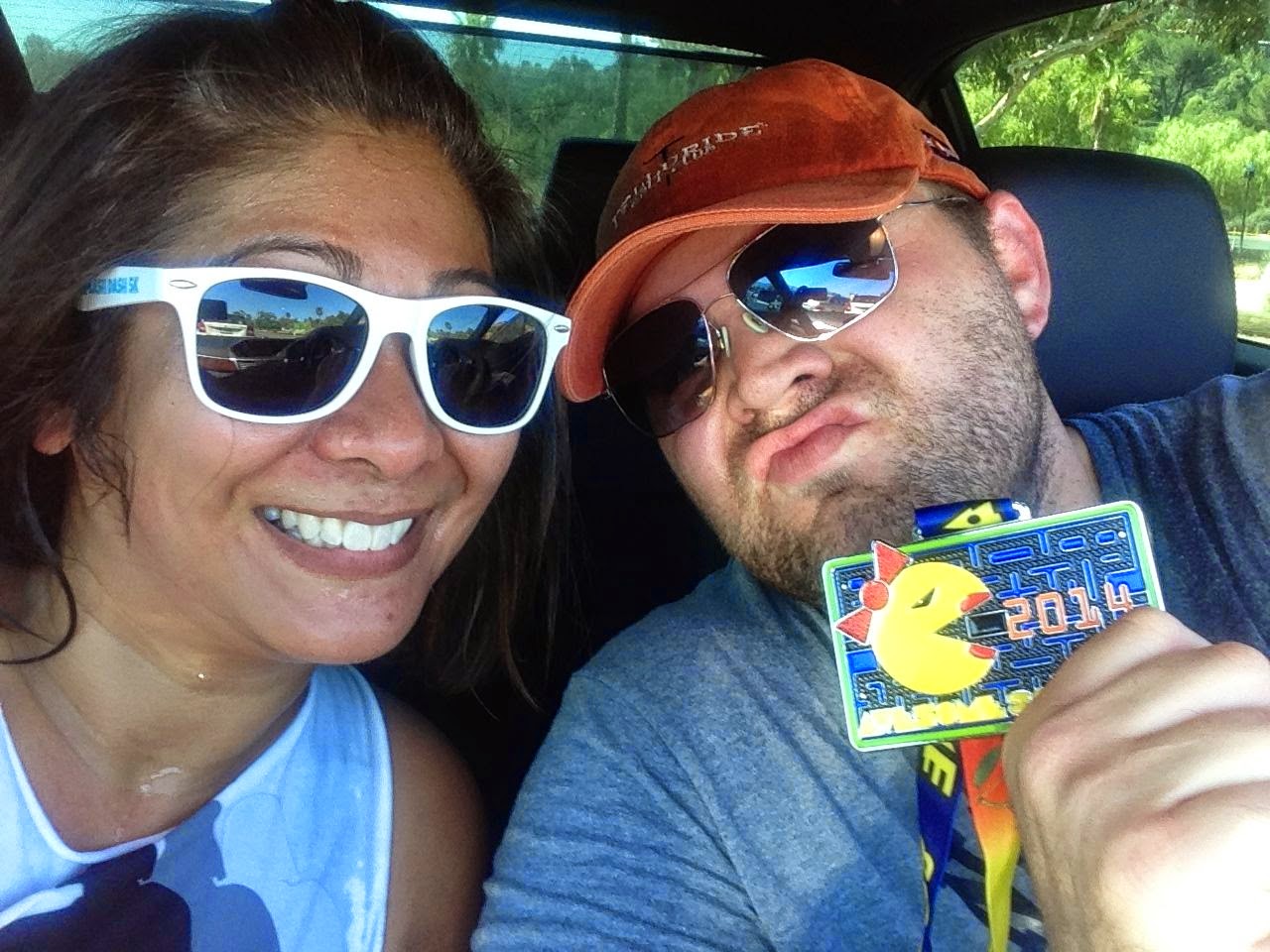 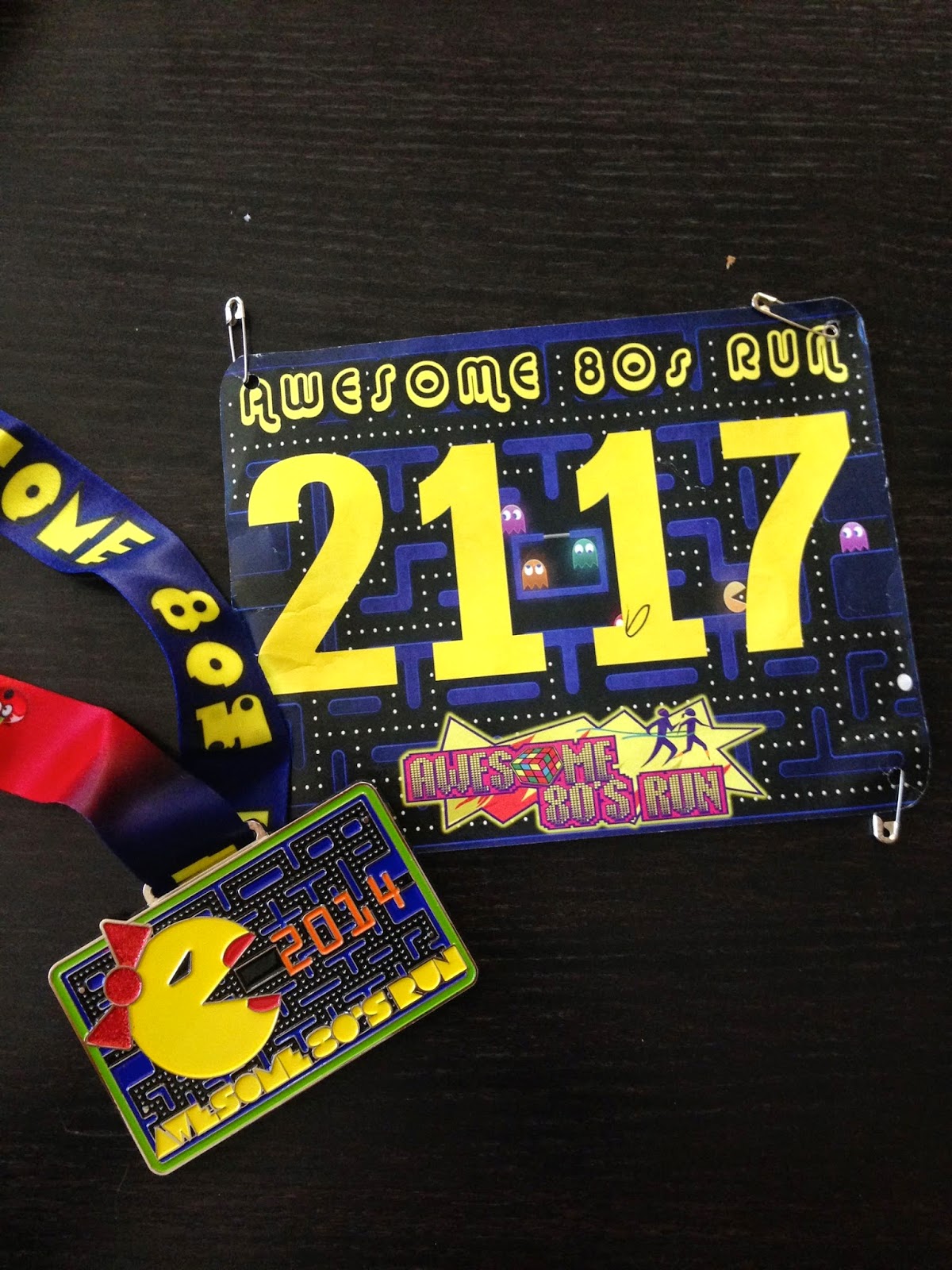 we'd left the bean at lilcee's, and they'd all waited for me to return so that we could go for a dip in the pool.  the hub headed home after dropping me off, and after i enjoyed some delicious breakfast that lilcee had saved for me, we suited up and went to cool off.

the bean showed off some fun skills, like doing handstands in the water. 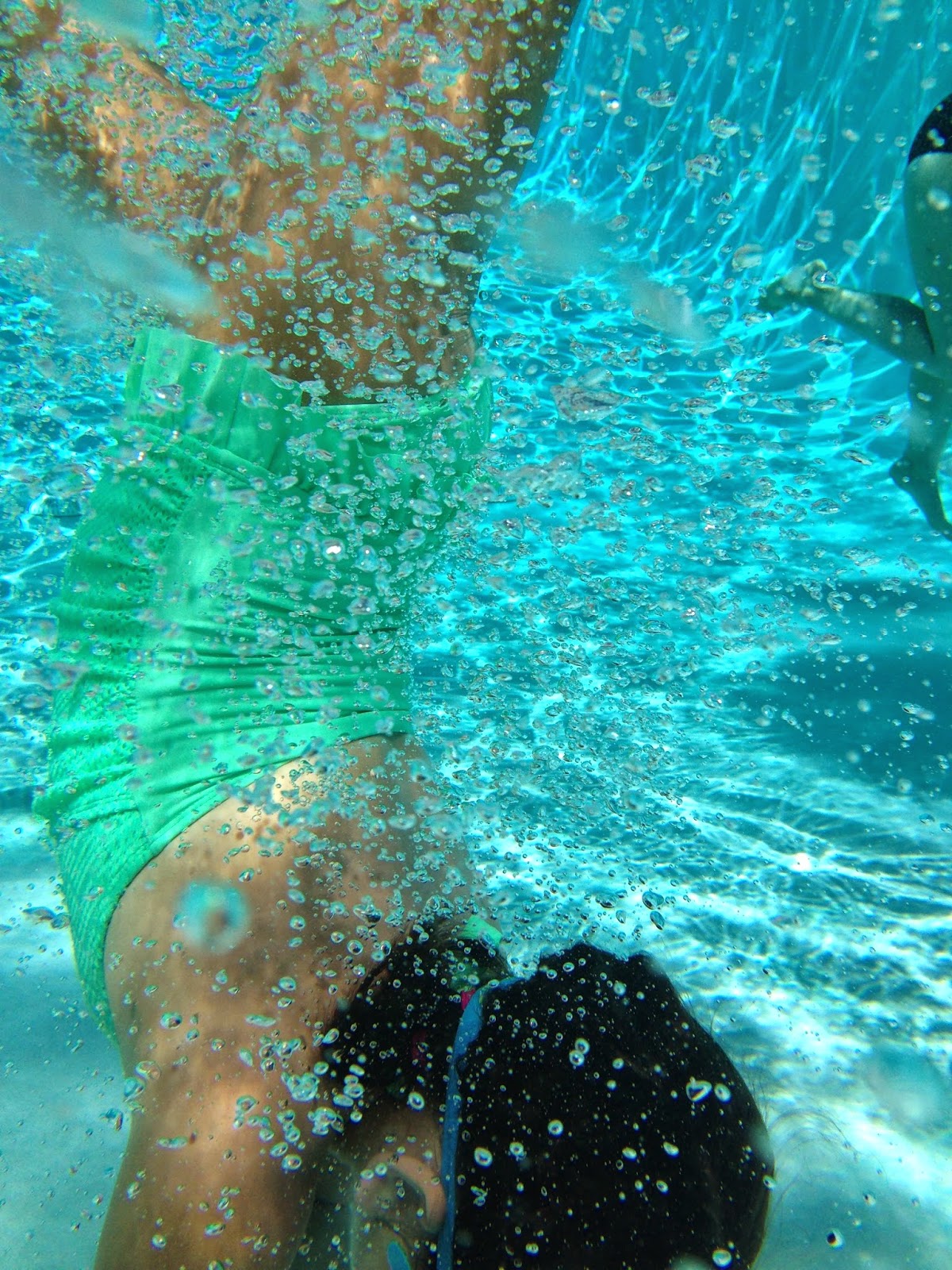 then she decided to be the "motor" for mini cee, who sat happily on a floaty and enjoyed the ride. 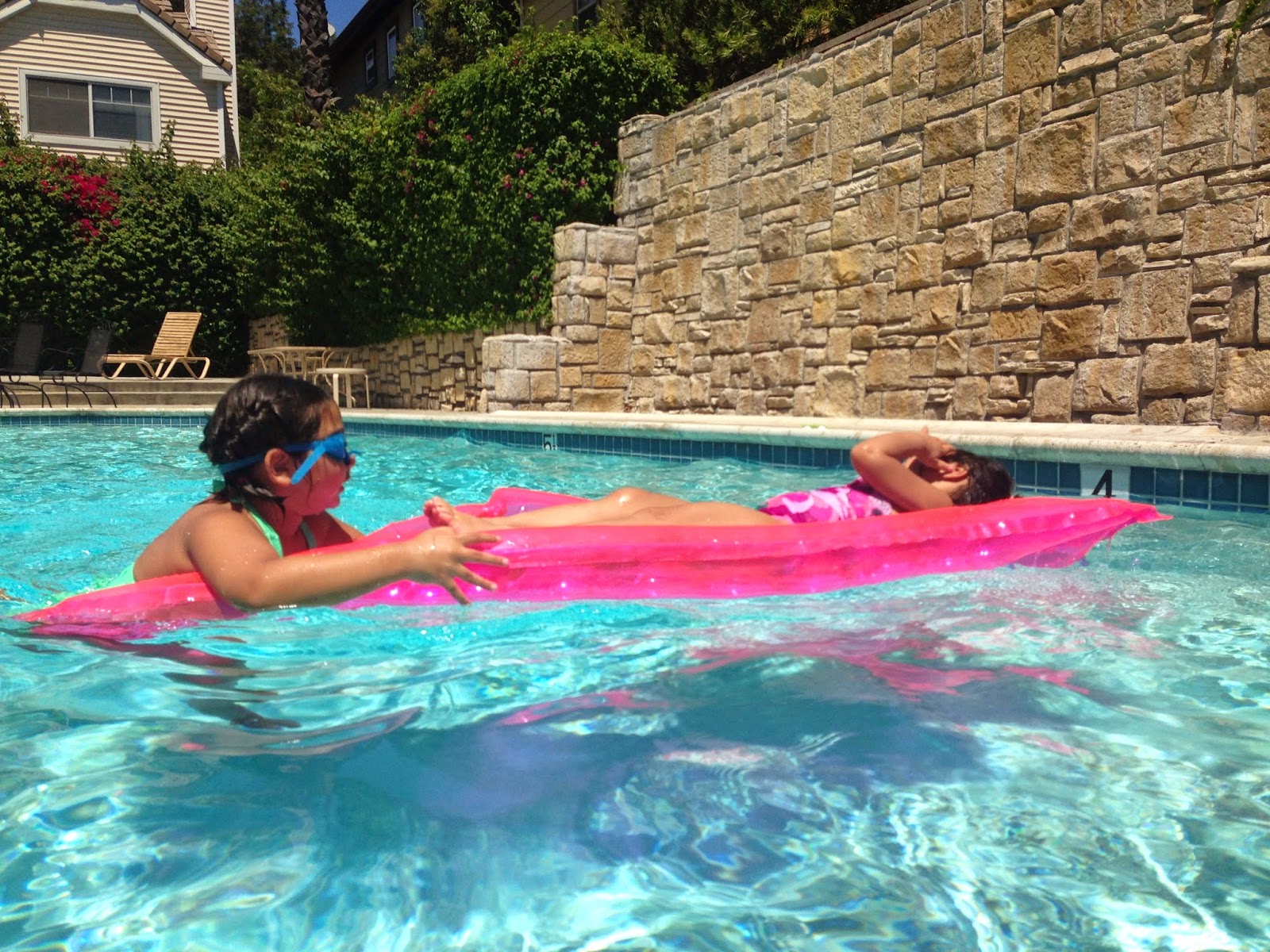 i was perfectly happy in my hat, sunglasses, and collection of noodles to float around on. 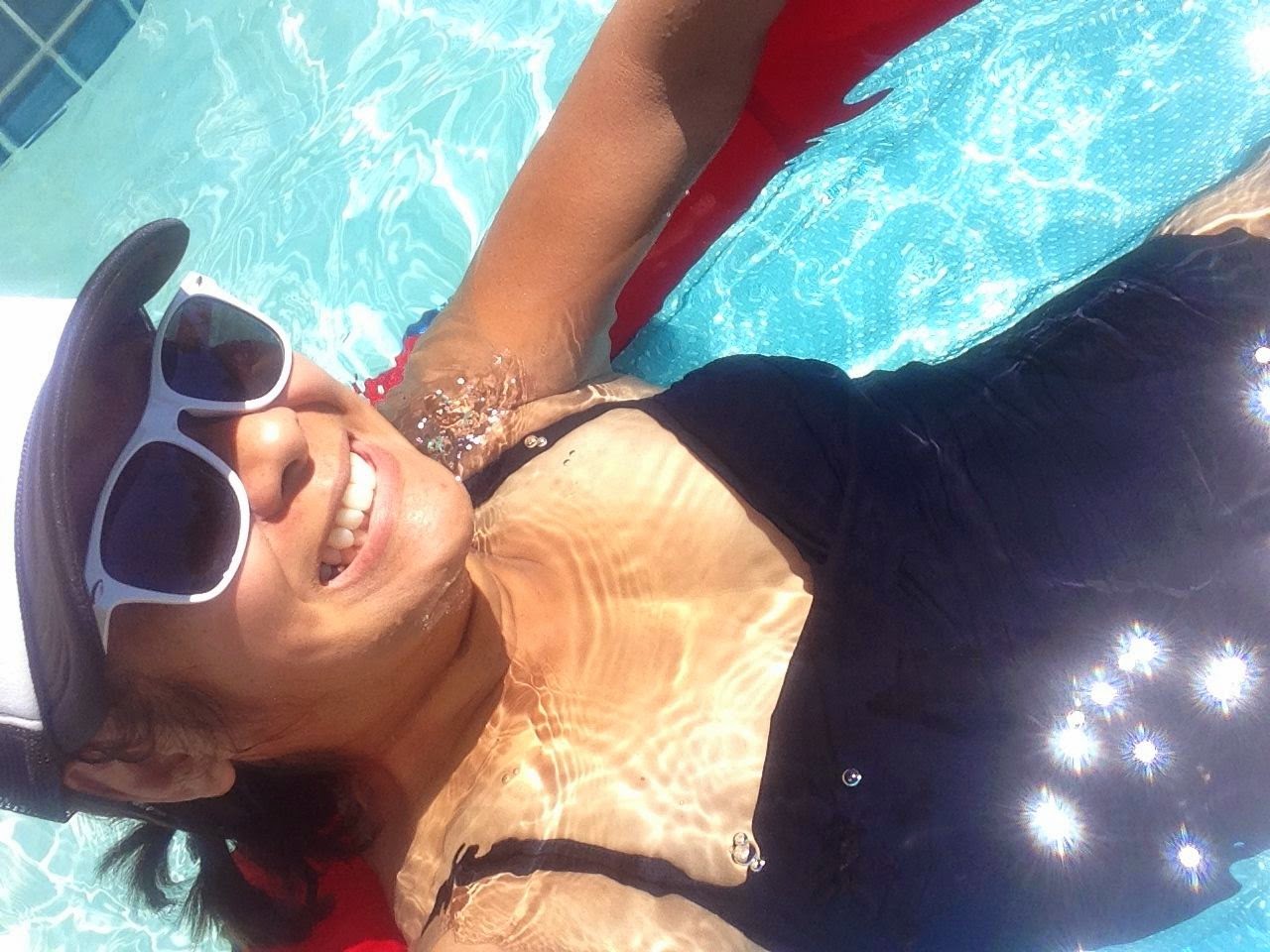 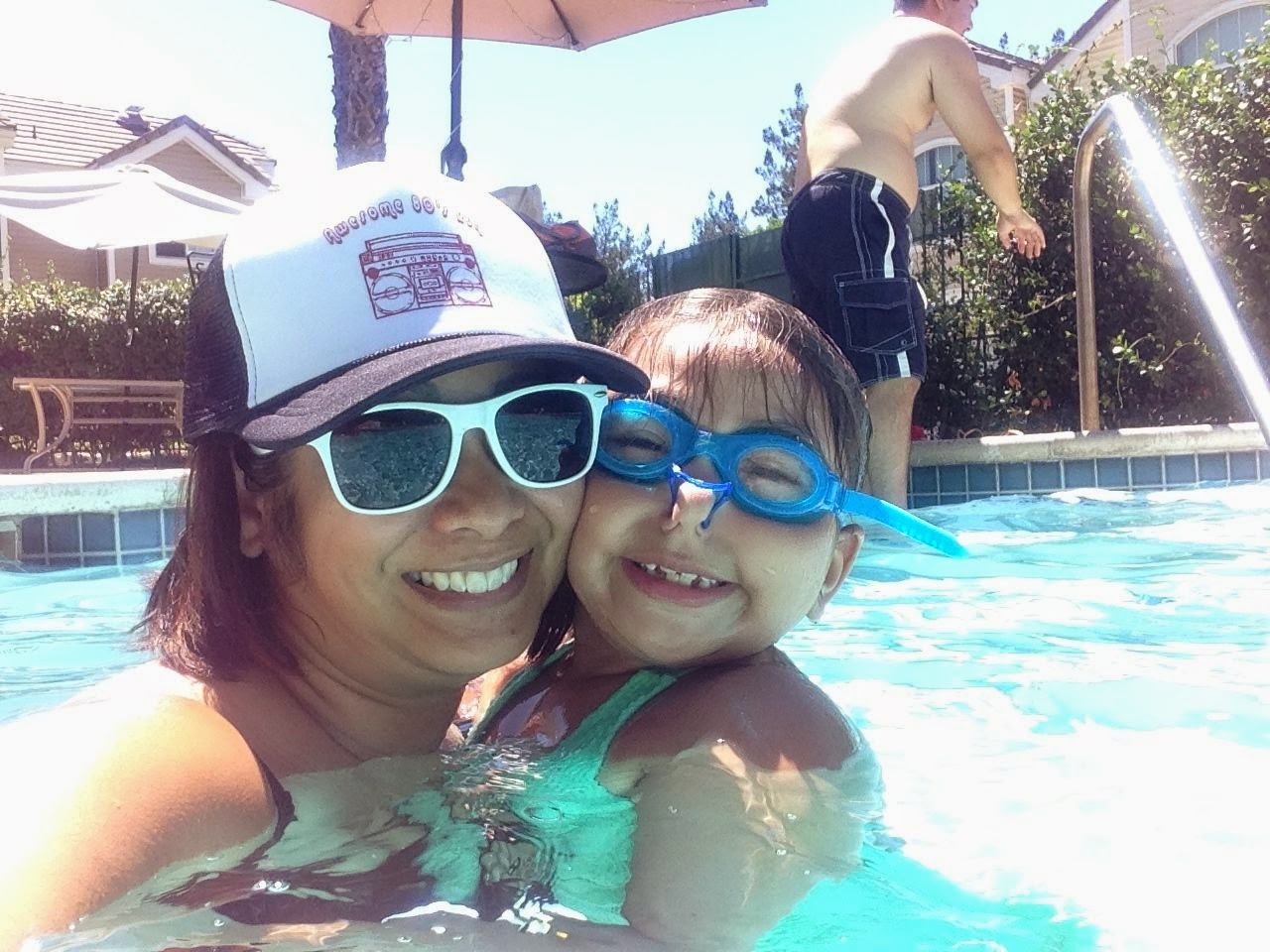 we capped off the afternoon with a late lunch at the habit.  grilled tuna steak sandwich and tempura green beans?  yes, please. 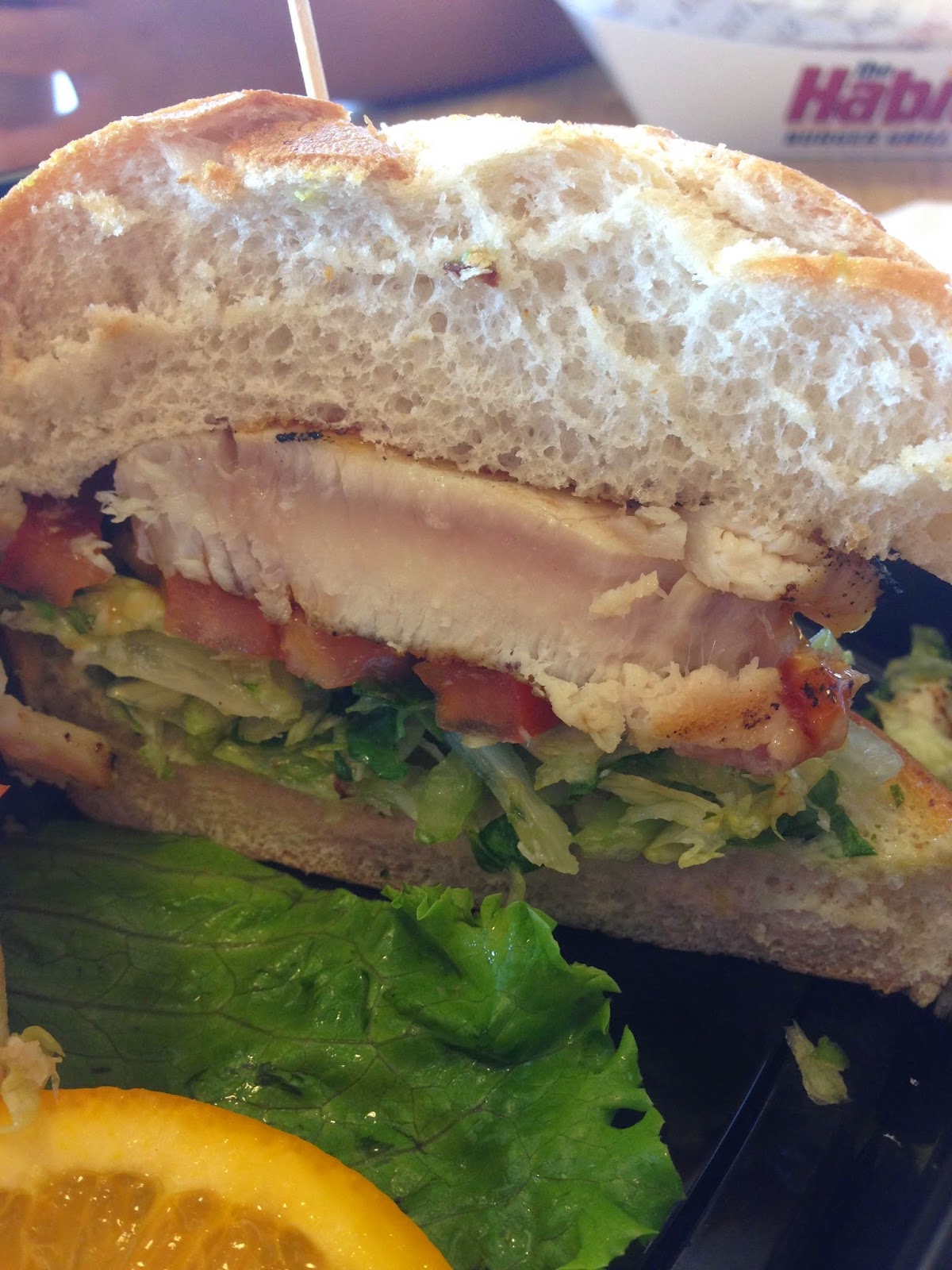 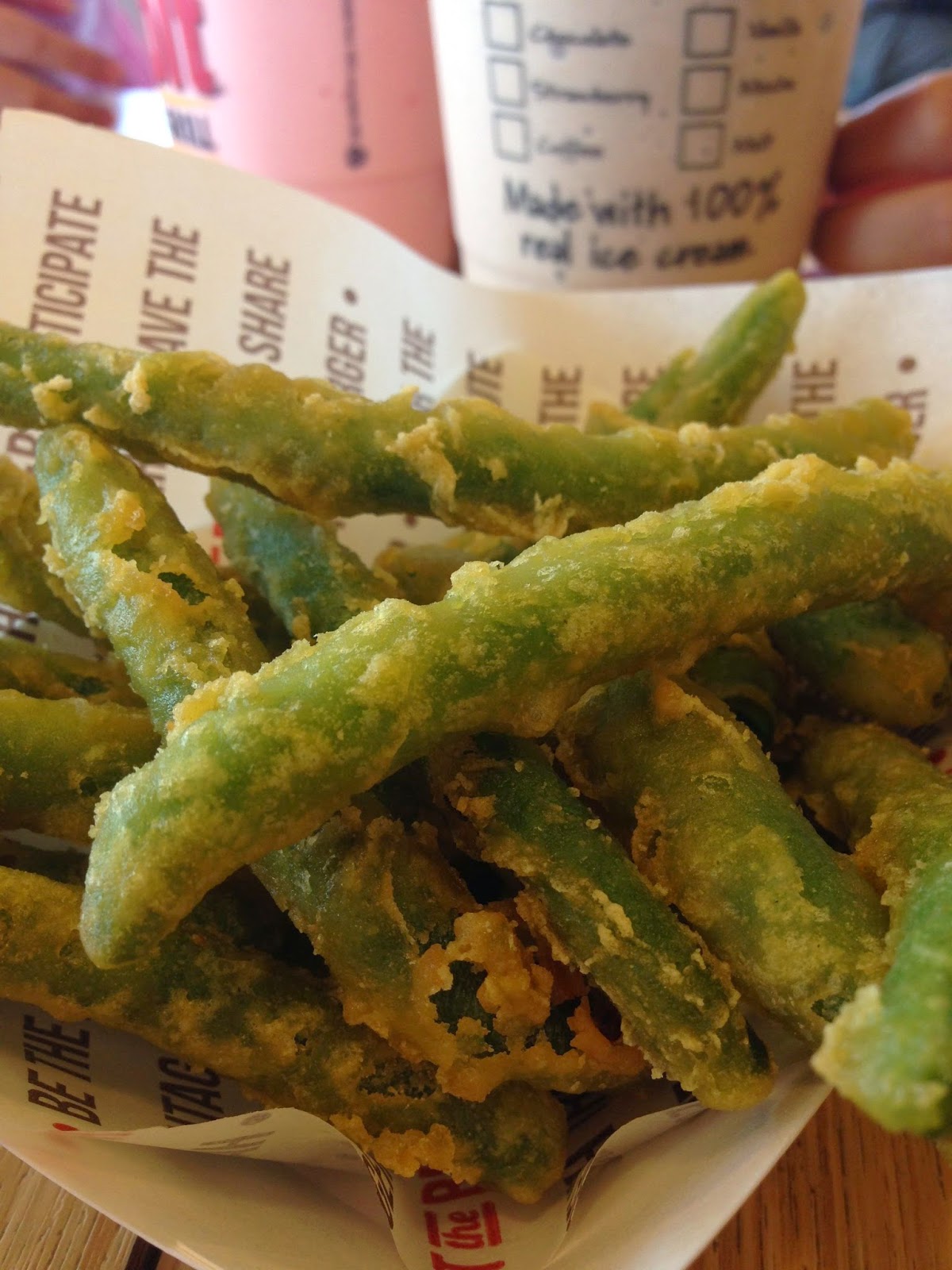 it was a super fun, totally awesome sunday funday.  they should all be like that.
at August 19, 2014

Email ThisBlogThis!Share to TwitterShare to FacebookShare to Pinterest
Labels: just keep swimming, running my ass off, sunday funday, the hub runs too