amidst all the hubbub of what was march 2016, i completely forgot to share about this year's scandal panel at paleyfest!  i think it's now become a tradition for me and a small group of my friends who are huge fans of the show, and this year our friend AMP managed to score us some ridiculously awesome seats just five rows from the stage, right in the center.  we were so excited, we could hardly contain ourselves.

just like last year, we kicked off the festivities with a fun dinner at california pizza kitchen, conveniently located just one level above the dolby theater where we'd be spending the evening fangirling like mad.  and what better way to start the party than with a cocktail...or five? 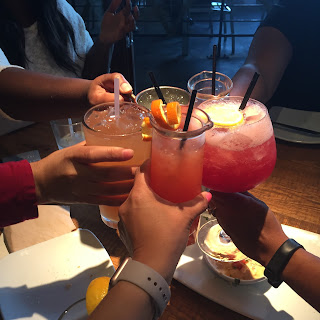 but to make sure i was completely sober, i filled my belly with some delicious shrimp and asparagus pasta. 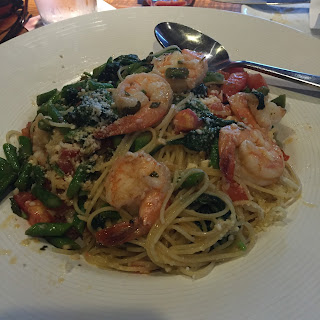 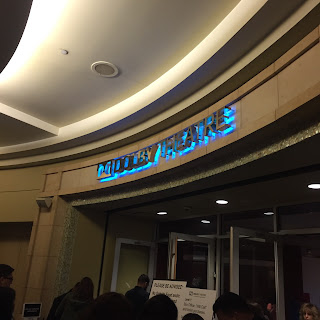 there were tons of fans gathered near the stairwell, and when you peered down at the level below us, if you were lucky enough you'd catch a glimpse of the cast strolling casually past on their way to god knows where.  backstage, or some fancy room with refreshments and bars of gold.  who knows.  i didn't get a picture, but when i peeked over i did manage to see josh malina, who plays david rosen, smiling and waving up at the screaming meemies above him. 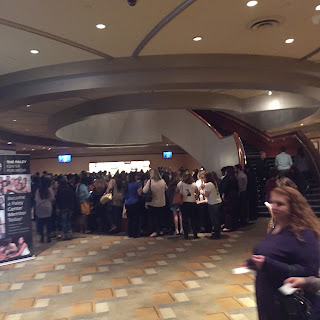 my friend cocoaellewoods had reminded us all that the beautiful leonardo dicaprio had just been at this very theater mere weeks ago, accepting his very first academy award, and she was determined to get a photograph of herself sitting in his seat.  when we found our own seats for the panel, she and i scampered down to the first row to do just that.  look, here it is: 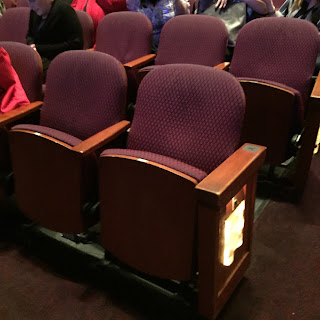 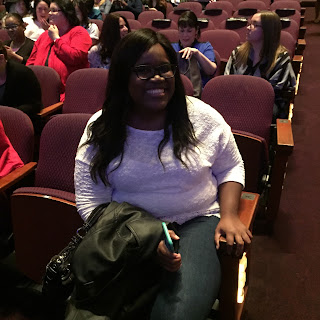 well, and of course i had to get one too.  you guys, my ass was touching where leo's ass had been.  eeeeeeeeeeeee! 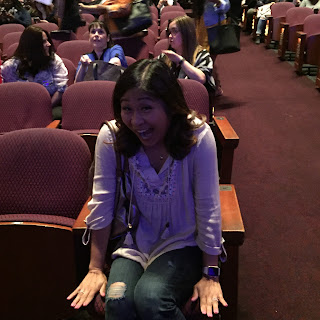 and then it was time to take our seats for the main event.  look at how amazingly close we were! 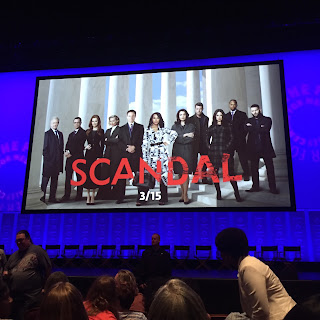 lara spencer from "good morning america" was the evening's moderator.  she came out for a brief moment to say a few words before we were treated to a screening of that week's episode...a few days ahead of when the general public would get to see it. 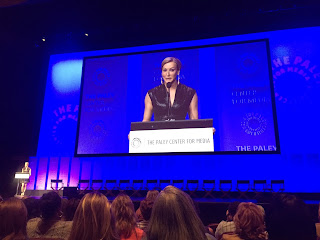 it was, of course, a fantastic episode - #14: "i see you," in case you wondered.  and then it was time for the cast to come out and join the fun.  they were introduced one by one, and they each took a seat and got themselves all mic'd up. 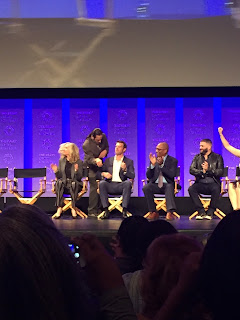 all of the main players were present, although i was a little bummed that artemis pebdami, who plays susan ross, wasn't there.  i love her character.  although everyone was excited to see that shonda rhimes was there this time, along with executive producer betsy beers.  it was fun to listen to them banter back and forth and choose their words oh so carefully when asked questions about specific plot points and such. 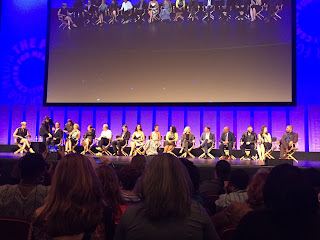 i think my favorite moment was when a fan questioned shonda about whether or not fitz would find out about the secret abortion olivia had before the winter break, and she basically said "does he need to?"  indeed.  shonda was clearly the fan favorite of the evening, as a majority of the questions were directed to her.  because i'm creepy like that, i spent an embarrassing amount of time watching scott foley, who seemed rather bored throughout the panel.  he really only spoke a small handful of times, which was a bummer compared to his chatty cathy self from last year.  and it was funny to watch cornelius smith jr., who plays marcus, and katie lowes (quinn) sneak in a quick selfie with guillermo diaz (huck) trying to photobomb them from behind. 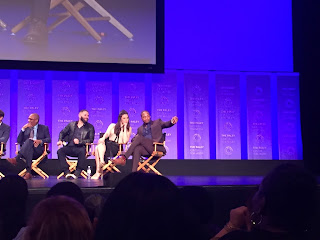 this chick on the left spent the entire time snapping photo after photo with her noisy ass DSLR camera.  i mean, yeah, i'm all about taking pictures too, duh.  but this crazy literally snapped away every three seconds or so for the duration of the panel.  when asked to turn the shutter sound off, she shrugged her shoulders and said she didn't know how.  i don't think there was a single person in our immediate area that didn't want to strangle her or take the camera and smack her upside the head with it.  it was so incredibly annoying.

and then at some point, this row of fans held up signs that apparently said something like "olivia + fitz" and some sort of emojis or something.  whatever they spelled out, the entire panel was completely amused by it. 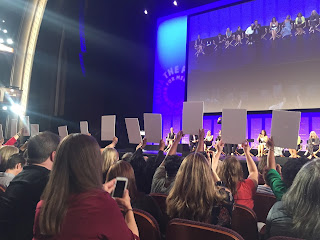 all too soon, it was over.  and despite our sweet spot so close to that stage, it was still super difficult to get up there to grab some face time with our favorite actors.  people were so incredibly pushy - we're talking grown ass adults here, literally pushing and shoving and forgetting not to be rude as all hell.  i tried my best to get up there, but it was damn near impossible.  i got this fun shot of katie lowes, though: 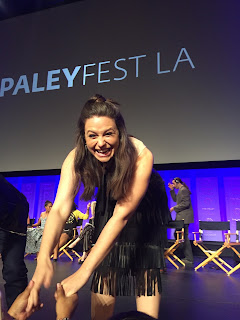 this is close as i got to guillermo diaz: 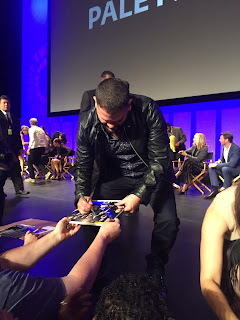 and scary papa pope, played by joe morton.  if you look just past him to the left, you'll catch a glimpse of scott foley...who scampered outta there quickly and quietly this time.  i guess he just wasn't into us this year. 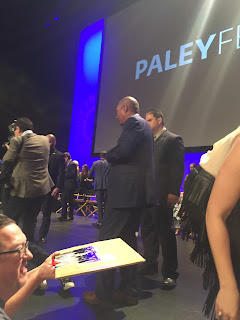 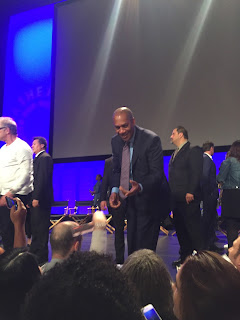 kerry washington is stunning.  and tiny. 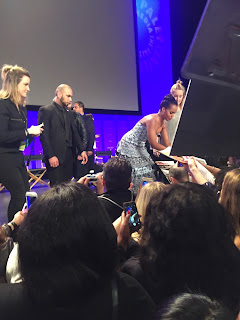 and this is as close as i got to shonda, off to the right in the yellow top. 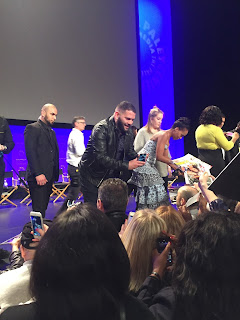 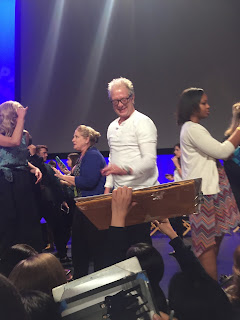 here, josh malina was pointing out to tony goldwyn a personalized license plate that someone was holding up.  something about fitz. 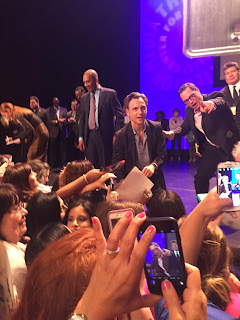 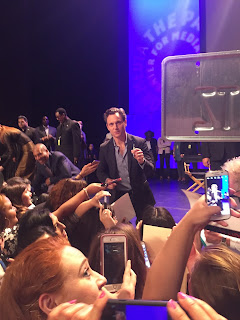 more shots of those two. 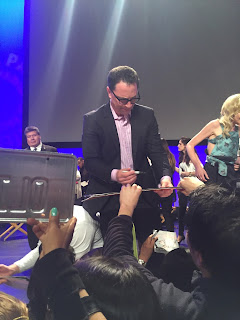 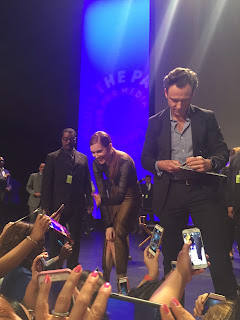 bellamy young (mellie), off to the right: 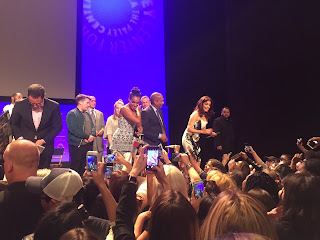 you can't tell from these pictures, but people were literally pressed up against every single inch of my body at this point.  one was even using my shoulders as an armrest, and i didn't even have room to turn around to yell at her ass or shake her off.  i'm usually good with dealing with crowds, but this was on a whole other level.  i was honestly starting to wonder if i'd qualify as a lesbian by then.  and when i realized that i was so completely surrounded that i was starting to have trouble breathing, i gave up and got outta there.  and so this was as good as it got when it came to getting a picture with anyone: 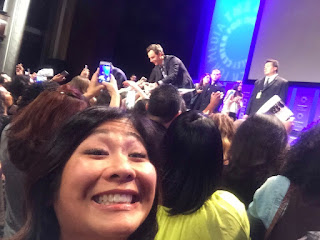 out of everyone, tony goldwyn spent the most time with the fans.  he was super patient and friendly to everyone, and stayed until the security guys finally ushered him out.

we huddled in line at the starbucks and fangirled some more before getting one of the employees to get our one and only group photo of the night: 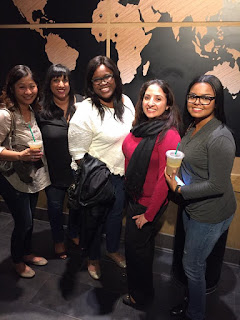 i sure hope they do another panel next year.  this has definitely turned into a really fun tradition for us, and gives us a great reason to come together and spend some time acting like schoolgirls over the fabulousness that is scandal.