an equestrian i am not

when we were prepping for cookie season, we announced to the girls that there were prizes that they could earn if they hit the sales goals that we set for them.  the first tier was set at 200 boxes, and we asked them to give us some ideas as to what their prize could be.  we threw out the idea of having lunch at the american girl cafe, or maybe an outing to build a bear at downtown disney.  they came up with two other suggestions:  a party at yogurtland or horseback riding.

somehow, that last one won out.  ugh.  i'm really not a huge fan of horseback riding - something about sitting on a living thing with a mind of its own and losing complete control over what's happening.  but majority rules, and that was that.  i couldn't very well opt out, because that wouldn't make me look like a very good leader, and so i was stuck.  yaaaaaaay.

although there are probably a few equestrian centers near us, we opted to go out of the box and instead made reservations at sunset ranch in hollywood.  it sounded like a fun outing with some pretty views along the way, and we got lucky with some great weather on the big day.  it took us about 45 minutes to get there, with the last bit taking us on a winding road up the hill and finally ending up here: 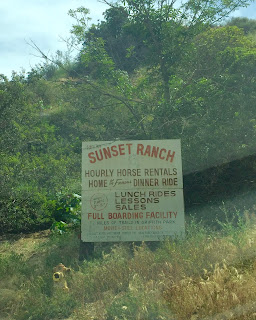 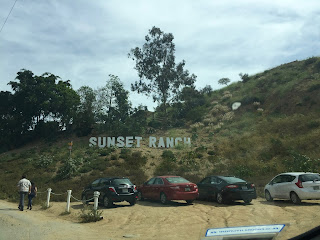 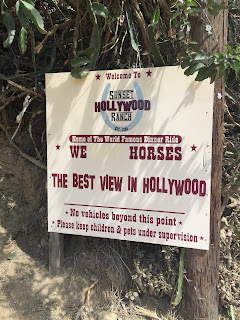 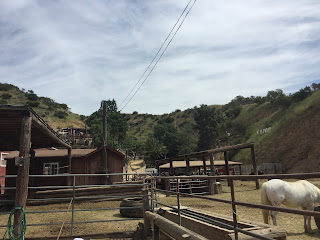 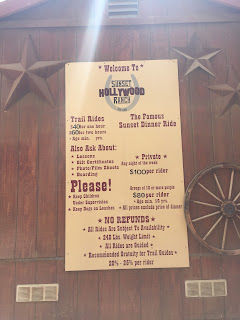 by the time we got there, most of the girls had already arrived.  we had waivers to sign, helmets to put on, and girls to corral.  we hit a bit of a snafu when we realized too late that a few of the girls were under the required minimum age (8).  this caused a bit of drama that happened so fast i didn't even really fully grasp what was going on until everyone affected had flounced off in a huff, and while i felt terrible about the misunderstanding, we still had 14 girls to manage.  on with the show. 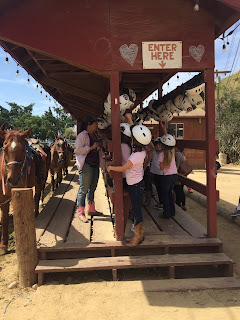 i managed to get at least one picture with my girl before we started mounting horses and getting ready for our hourlong ride. 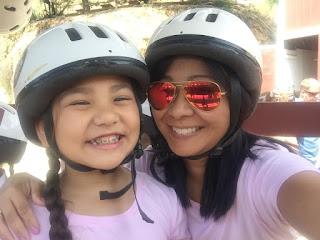 i got to ride on apache, and he was very pretty.  and pretty chill, unless another horse got too close and then he would snap back a little. 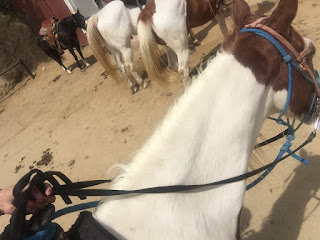 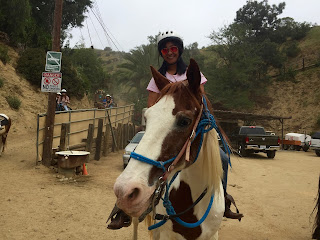 as the ride began, we headed up a hill and found ourselves on a trail that we shared with hikers and runners on their way up to the hollywood sign. 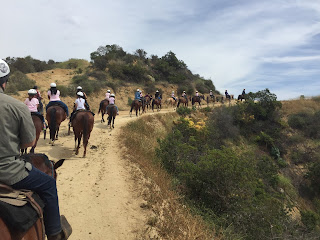 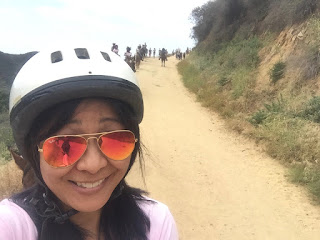 i'm not gonna lie, though.  the way that those horses hugged the edge of the cliff scared the shit out of me.  not literally, but pretty damn close.  i kept trying to steer apache away from the edge, and sometimes he'd listen and sometimes he'd turn his head and give me the "fuck off, lady, i'm looking for a snack here" look.  he did that quite a lot, too - grazing on the fresh greenery that came with springtime.  i was constantly having to yank his head up and nudge him to keep walking. 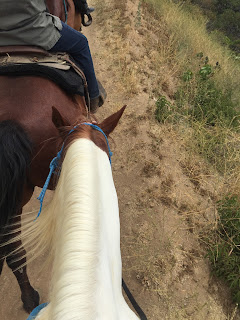 the bean was having the time of her life. 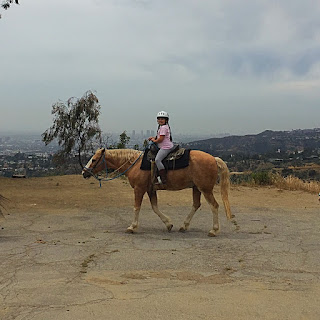 while i appreciated the cool, cloudy day, i was a little sad not to have a clearer view once we got a little higher up the mountain. 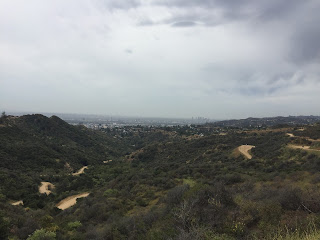 the rest of the ride was pretty uneventful, as i'm sure these horses are used to the route we took.  we caught a glimpse of that hollywood sign just before we made the final turn back towards the ranch. 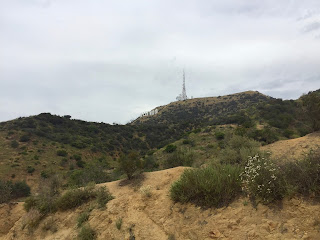 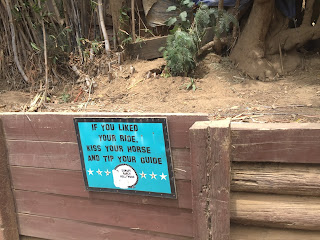 everyone seemed to have a good time, and as everyone dismounted we took one final headcount before releasing the girls to their parents.  i'd hitched a ride with my co-leader and one of the other moms, and since everyone was hungry, we decided to try something new - grand central market in downtown l.a. 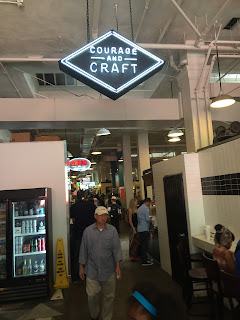 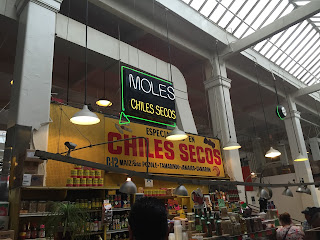 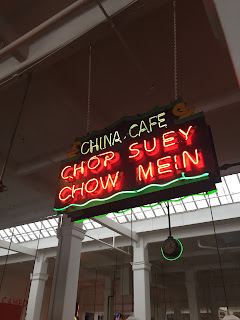 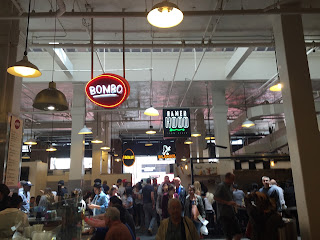 i wanted to try this place: 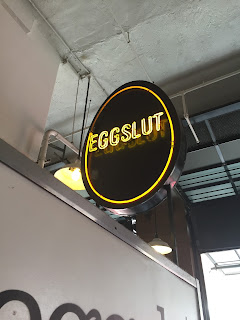 but the line was insanely long, snaking down the path and around the dining area. 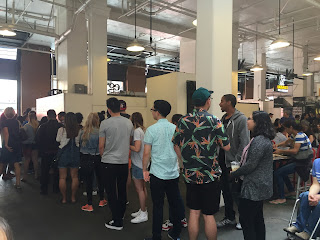 at the bean's request, she and i ended up grabbing food here: 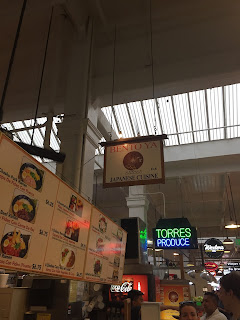 on our way out, we caught a glimpse of someone who was filming for something.  no idea what or who it was, and this picture tells me nothing at all. 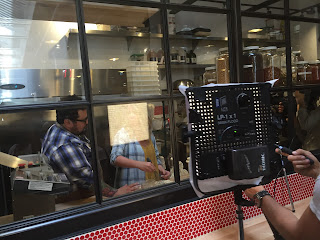 the girls wanted to play in what they called "the playground on the way back to the car," and since they'd been pretty much cooped up for most of the day, we let them burn off some energy before hopping back into the car for the drive home. 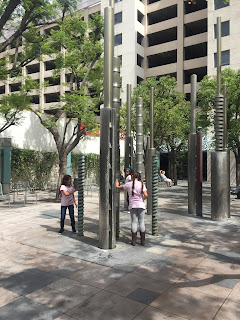 with the old lady out in the desert for weekend 2 of coachella, she was bummed not to have been able to join us for the ride.  i told her that i'd be happy to take her and her sister if they wanted to...but i'll be sitting it out, thank you very much.  i've ridden two horses in 2016, and that's pretty much my quota for the year.  no more.
at April 29, 2016