on friday night, we made good on a promise to our troop after the first sleepover we did at the church.  we had our usual meeting, during which we worked on earning a couple of final badges for the year.  the last one involved a "take action project" to help out someone in our community, and since we'd already done a lesson earlier in the year during which we made dog toys out of leftover fleece fabric, we built upon that with a quick lesson on how to make no-sew tie blankets. 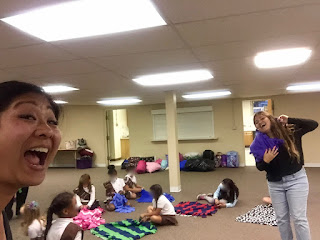 after that was all done and all of the girls who weren't sleeping over had been picked up, it was time to get down to business.  which, in this case, meant that the real fun could begin.  we kicked it off with some dinner: 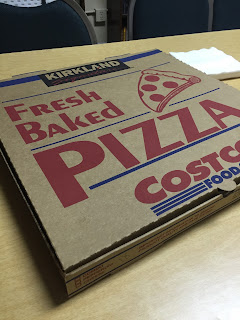 while the girls ate, i went to the table to check out the handful of blankets that a couple of the girls had finished.  two of them looked like they'd tied the knots so tightly that they looked more like bonnets. 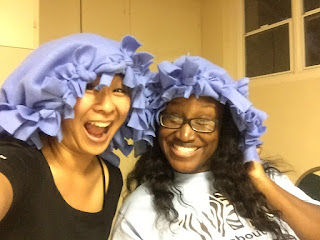 while we were giggling over that, the old lady and the hub were busy making things happen.  they were connecting cables, making adjustments, plugging things in, and eventually they got it all to work so that we could turn on a movie for the girls. 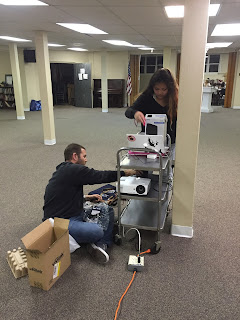 my co-leader had found something fun on facebook that showed her how to make churro ice cream bowls.  you know those videos, right?  the ones that take basic ingredients and a handful of simple looking steps and end up with something fantastically tasty?  well, she attempted it and while it didn't quite turn out like the ones in the video, we didn't really care about presentation.  and neither would the room full of 8-year-old girls we were going to serve them to. 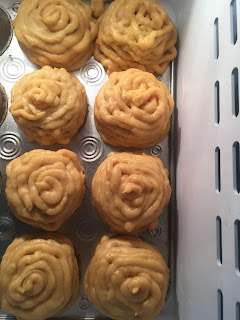 the church has a really nice full kitchen available for us to use, which included this fantastic wolf stove and oven.  it's old as all hell, but it was perfect. 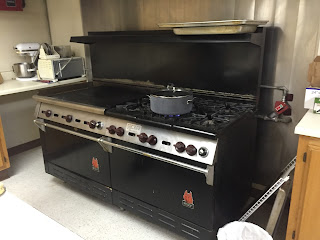 except that we had a hell of a time trying to pry those things off of the cupcake pan.  they were frozen solid and there was butter in the batter and plenty of pam sprayed on the pan, but for some reason they were just stuck.  we thought about just dunking the pan into the hot oil that was ready for frying, but decided to try softening them up in the oven a bit and hoping they'd slide off.

that didn't work.  all that happened was that they got soft and doughy and even more difficult to work with.  and so we threw them back into the freezer for about ten minutes and hoped for the best.  when we pulled the pan out again, my co-leader took a plastic spoon and went to work, eventually managing to pry off most of the dough.  it wasn't in bowl form anymore, but we decided they could be churro plates instead and popped it into the hot oil.  it cooked up really nicely and smelled great, so it gave us the motivation to keep on truckin'. 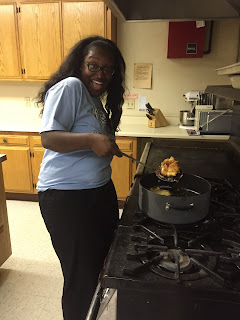 the old lady was tasked with taking the hot churros and dousing them with cinnamon sugar. 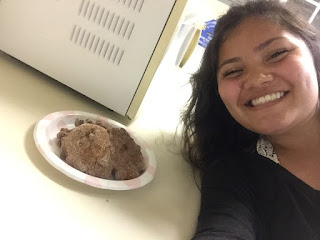 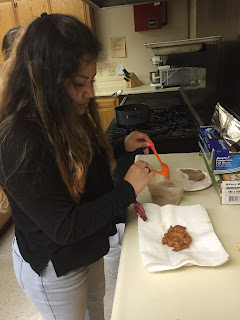 i was the lucky one who got to work on prying off the rest of the churros from the pan. 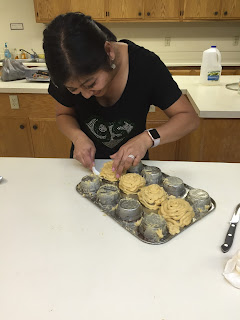 so while they didn't look great, they tasted pretty good and served our purpose. 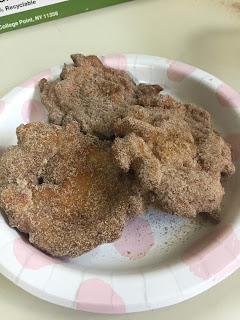 we were pretty happy with how they turned out, as were the girls. 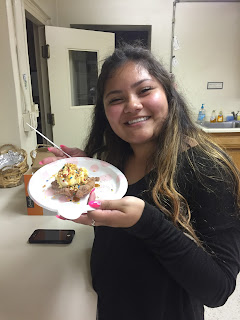 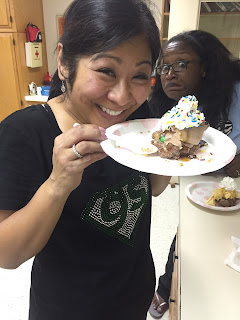 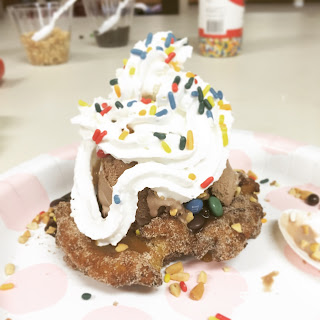 after the ice cream extravaganza was over, we sent the girls to brush their teeth and get ready for bed. 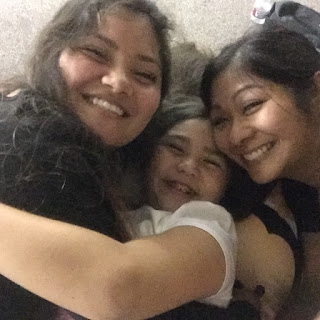 they ended up watching two movies before we called lights out and everyone eventually fell asleep around 11:30 or so.

the next morning, we got up early and got the girls going on rolling up sleeping bags and putting their stuff all together.  i mixed up some pancake batter, put out some leftover ice cream toppings and then brought the girls in to learn how to flip a pancake.  i probably should have just brought the whole box of pancake mix, because as it turned out, we had just enough for them to each make one pancake.  but they had their choice of toppings - rainbow sprinkles, chocolate pearls, chopped nuts plus whipped cream and syrup.  and their parents were beginning to arrive to pick them as they were throwing their trash away, so the timing was perfect.

by 8:30 we'd finished cleaning everything up and getting the room back into the same shape it was when we got there the night before. 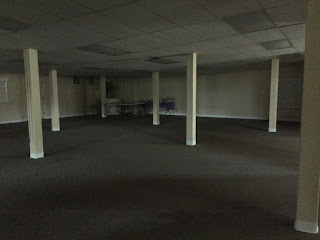 only three meetings left to go, and this brownie year is done.  it'll be kind of nice to have my friday evenings back, although the bean is already in mourning over the loss of her weekly hangout time with the girls.  heh.