a week full of celebrations

so after my triumphant finish at the tinkerbell half, we headed straight home to relax and unwind.  i was pretty excited to stretch out and take a nice nap - what better excuse for a super lazy day than getting up at the asscrack of dawn, running thirteen miles and on mother's day to boot?

when we got home, the hub was waiting for us in a clean house and dinner all planned out.  there were flowers on the table, candles were lit, and everything looked lovely.  he left to get some work done at the lounge right as i was getting ready to doze off on the couch, and it made for a fantastically lazy afternoon.

he came home a bit before dinnertime and put the girls to work getting things ready while i continued to lounge around in the living room.  and when i got up to join them at the table, this is what i found: 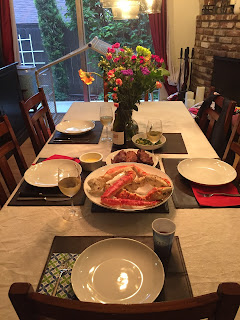 i don't know if it gets much better than that.  and then i whipped out the selfie stick so we could get at least one group shot in for the day. 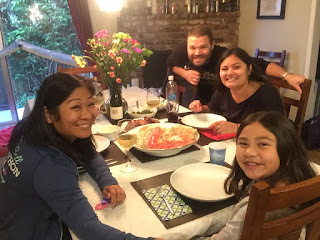 after gorging myself on steak and king crab legs, i was entertained by the old lady's antics with the gigantic chocolate covered strawberries he'd picked up for her at costco. 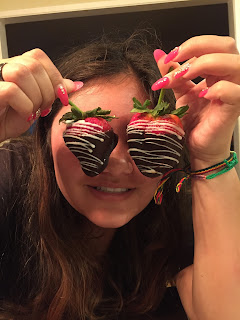 fast forward a couple of days later, and the bean happily got up early on her sister's birthday to make her breakfast.  i helped her by cooking the bacon and turning on the toaster oven, but she did everything else:  cinnamon toast, bacon and orange juice. 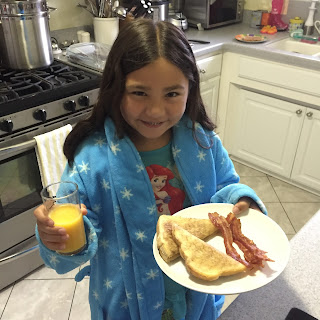 and then while the birthday girl was at work, i hightailed it out to party city to pick up some supplies to make the house look a bit more festive. 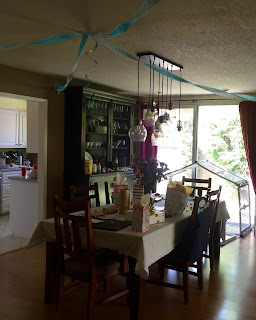 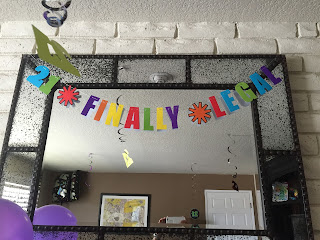 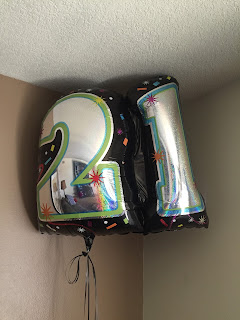 i was texting with my co-leader to make sure she kept her in the office long enough for me to finish everything up, and when she said "uh-oh, i think she's getting ready to leave" i panicked.  "STALL!  STALL!  I'M NOT READY!"

she could only stall her for so long before she texted again and said "okay, i've gotta send her home or she's gonna quit on me!"  so then i managed to finish wrapping all of her gifts...and then i realized that it was time to pick up the bean from school. 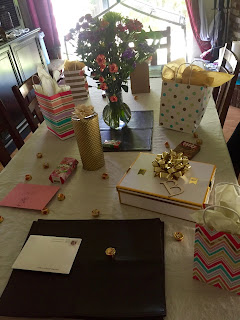 i texted the old lady and nonchalantly asked her what she was doing, and when she said she was stopping to grab something to eat i told her to take her time.  i knew she'd know exactly what was up, but she played along anyway.  and when the bean and i got home, she texted again to tell me that she was on her way and so we hid behind the door and then jumped out when she walked in. 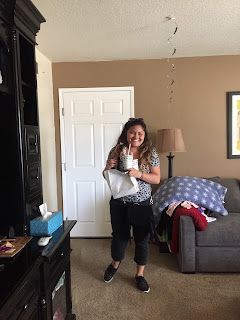 after she'd had time to eat and relax and hang out a little, the hub got home and then it was time to open presents before leaving for dinner at au fudge. 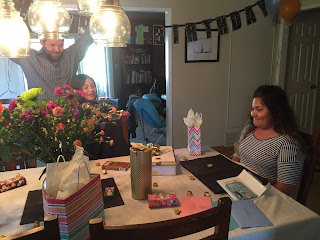 the bean picked this gift out for her sister, and she was really excited to see her open it. 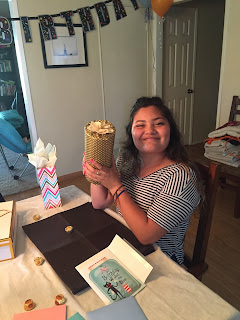 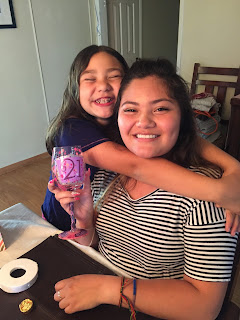 it always cracks me up when she flings tissue out of gift bags with dramatic flair.  the bean loved it too. 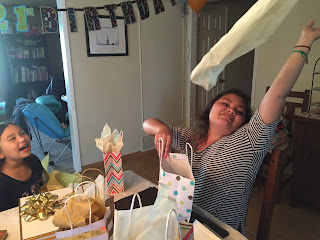 okay, so this is a pair of pants that i knew she'd love.  so not my thing, but i was right - she was pretty excited to pull them out of the bag. 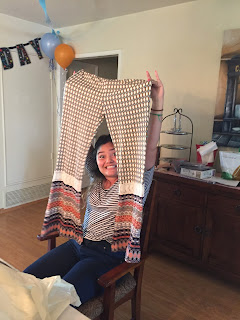 there were other things, including new makeup and more clothes and a new wallet, and then she moved on to reading the cards. as we were leaving, i realized that she'd received a package and handed it to her to open on the way out to hollywood.  MIL is always really fun and creative with her gifts, and this was no exception.  the first thing she pulled out of the box was a fun tiara to wear while she opened the rest of the package, and the note said "put this on and then pull on the ribbon." 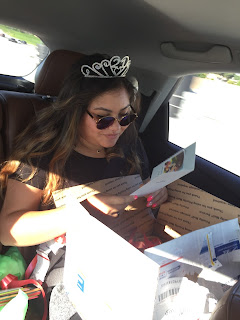 she did as she was told, and as the ribbon slid out of the box she found the first of no less than 21 different greeting cards inside.  some had cash in them, others had fun pictures from the last decade or so, and a few of them had little presents like a birthday button tucked inside.  she had a blast opening them all, and it made the car ride go by in a flash.

may is always a fun month in the house of wan.  i'll be sad when she moves out and we don't get to do silly stuff like this anymore.  and with her being 21 and eyeing other job opportunities that are potentially falling into her lap that coordinate perfectly with her current position - well, that day could come sooner than later.  and i will cry.  but i'll be excited for what comes next for her, and it'll be pretty amazing to watch her spread her wings and really learn how to fly on her own.