saving the planet, three bags at a time

the old lady has been collecting empty water bottles in a big ass bag in her room for months.  it's kind of ridiculous, although i certainly won't fault her for trying to be mindful of the environment and setting a good example for her sister.  not to mention, she was hoping to earn some cash once she finally managed to save up enough of them.  but when she found a significant corner of her room occupied by what had turned into three trash bags full, she moved them out into the garage.

except that the garage is the hub's domain.  sure, i have a lot of my crafting supplies and things stored in there, so it's not necessarily just "his" territory.  but most of my crap is organized into plastic storage boxes and placed neatly on wire shelving along the wall.  she decided to plunk those bags down next to the garage door, between the wall and the very much unloved elliptical machine...right where he can see it and walks past it every single day.  this did not go unnoticed, and after several weeks he finally snapped.

"if those bags aren't gone by the end of the week i'm tossing them into the recycle bin!"  gah.

so while the bean was off at her saturday math class one day, we tossed the bags into my trunk and headed out to find the nearest recycling center to drop them off and hopefully cash in.  turns out there's one just down the street from where we were, and so we pulled in and waited in line behind the man who was dragging what seemed like a shitton of bags full of recyclables.  he emptied them into containers to be weighed, and then the dude who was working there put them on the scale before dumping them into a compactor. 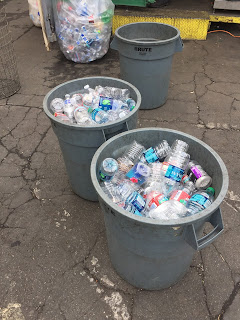 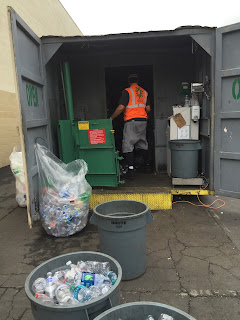 there was a sign posted with all of the rates for the various types of plastics and such, but we didn't pay too much attention to it because math. 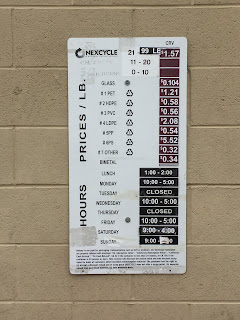 her sad little three bags of plastic bottles just barely filled up a couple of tubs, and it took but a few seconds to weigh them and print out her receipt. 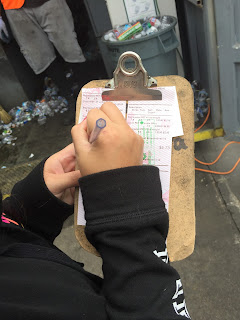 when all was said and done, all those months of saving and taking up all that room added up to...

that's right.  she had just enough to buy her sister a treat and pocket a few bucks. 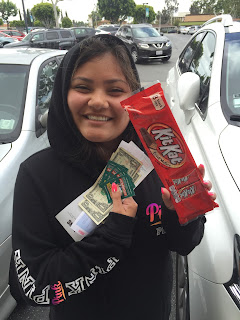 let's just say that every time we empty a plastic bottle nowadays, it just goes straight into the recycling bin.  heh.
at May 31, 2016