okay, so we all know that i'm a big ol' lifelong fan of "general hospital."  this isn't news.  so i'm sure it's no surprise that i follow a bunch of the cast on twitter, right?  so anyway, a couple of weeks ago i saw this tweet: 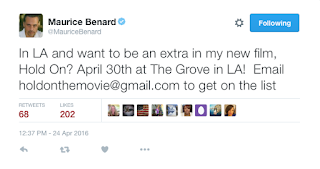 i immediately forwarded the tweet to the old lady (who was still at coachella at the time, mind you) and she was like "yeah, sure, let's go."  so i sent our names, plus the bean's to the email listed and was surprised to receive a response within minutes.  turns out that the only requirement was that everyone be over 18, and the filming was happening at night.  like super late, with a call time of 11pm.  yikes.  and with the hub heading out on a pre-planned boys' weekend away, i was stuck.

after a few convoluted texts back and forth (on my part, of course), lilcee came to my rescue.  she offered to take the bean overnight, and especially because it had been ages and ages since our girls had spent any time together, i knew it would probably be quite a flurry of happy activity over there.  lilcee always takes great care of her, and she loves hanging out with them.  so i totally owe her big

the old lady and i tried our best to take a nap during the day in hopes of being able to stay up that night.  too bad we're both not very good nappers, because i managed to get maybe an hour or so in, while she got even less.  oh, well.  we dropped off the bean at lilcee's and headed out to the grove around 8:00.  with not much traffic to contend with, we were there in no time.

we usually like to eat over on the farmers market side, but since it was so late all of the stalls were either closed or cleaning up...even starbucks.  ack!  we ended up heading over to the other side of the grove and grabbed a table at umami burger, where we both ordered the "manly" burger and shared a side of truffle cheese fries. 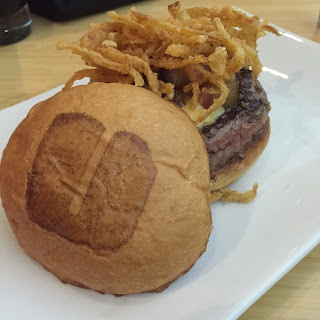 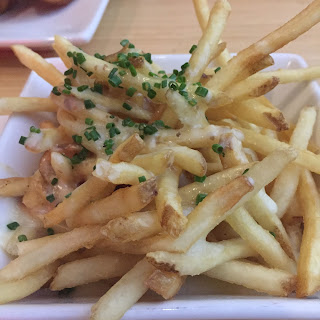 we killed the rest of the time walking around, peeking in at the shops, and eventually remembering that there was a starbucks cafe at the barnes & noble.  thank goodness.  with coffee in hand, we were finally properly fueled for the night.  except that when we went to use the restroom before checking in, we found that it was roped off.  d-oh.  back to barnes & noble we went, just before they closed for the night.  and then we went out in search of where to meet up with the casting people, asking a few folks who were scurrying around with walkie talkies and clipboards and things, and were escorted to the valet parking lot along with a bunch of other extras. 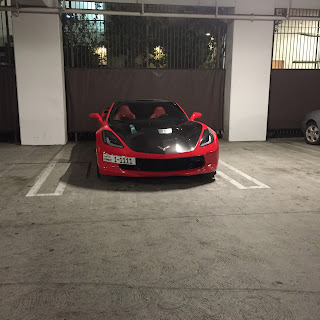 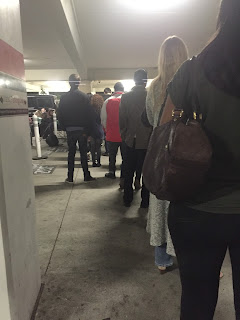 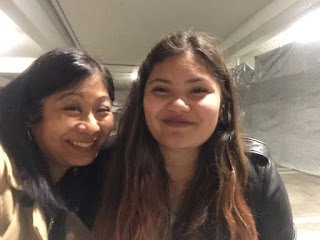 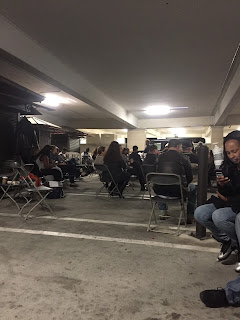 one of the PAs got up to announce that they were going to raffle off a bunch of $100 gift cards to the grove, and because we couldn't hear too well i decided to get up and stand a little closer just in case we happened to get called.  we didn't, of course, but another PA was looking for a handful of women who were all checked in and ready to work.  i raised my hand and was chosen, so i motioned for the old lady to join me and we started following the PA to points unknown. 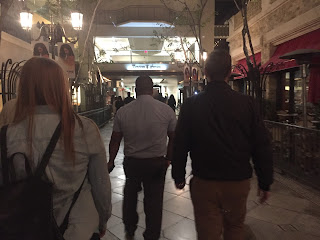 except that she noticed that the old lady wasn't one of the people she'd chosen.  damn.  so much for being slick.  she asked her to rejoin the group in the parking garage, and with a super annoyed look at me, she turned around and did as she was asked.  i felt bad, but i figured we wouldn't be separated for long.

i ended up being used in a scene where the lead actress (not anyone i'd ever heard of, but whatever) was heading into the restroom - the very one that had been roped off when we tried to use it earlier. 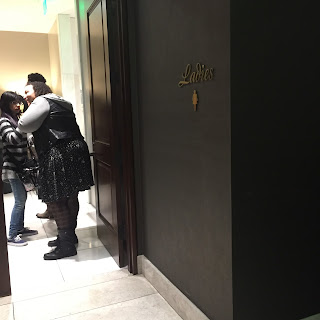 the girl i was with and i didn't receive a whole lot of direction, so the first take wasn't exactly how they'd envisioned it.  once we knew what the assistant director wanted us to do, we did two more takes and then we were good.  and it wasn't anything difficult at all...just head into there like any other time, don't look at the camera, walk into a stall and shut the door.  so this was my view for a lot of the time: 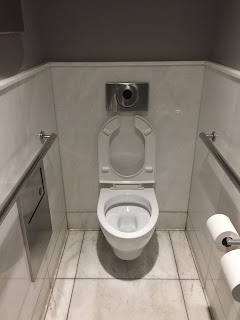 i hope i don't end up on the cutting room floor.  i would totally crack up at the sight of me trudging into the restroom during the movie, but whatever.  i'd be in a movie!  whee!  and then after those three takes, we were released and headed back to the garage where the old lady seemed relatively happy to have me back.  sorta.  heh.  and then after a bit more waiting, we were all called up to start filming a concert scene, which is what we'd been told we'd be doing anyway. 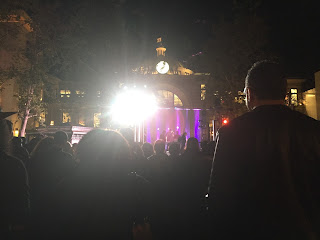 there were promotional posters for "the concert" posted everywhere. 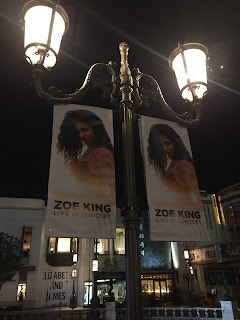 and as we stood there, we felt as though we were being watched.  look at the creepy ass mannequins on the second floor of the athleta store: 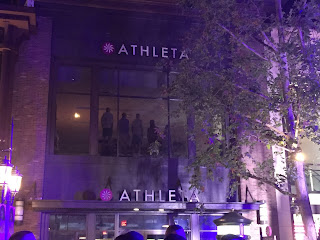 it was pretty cold out there, and there were some long waits in between takes.  but look - if you look closely behind me on the right side of the photo, you can see maurice benard, aka "sonny" on GH: 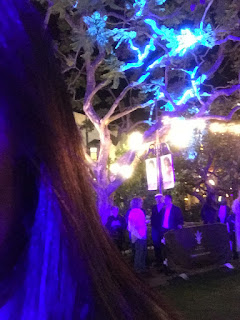 and then after a couple of takes he noticed people waving at him and decided to come over and say hello.  he was really friendly and patiently posed for photos with everyone who wanted them...including me.  duh. 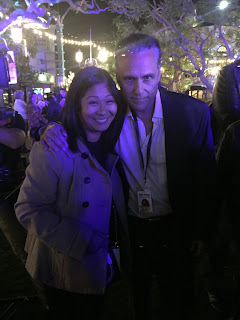 a little more time passed and then all of a sudden it was 3am.  the old lady was so over it, as was i, so we were a little extra salty when the director appeared onstage and said "okay, let's break for lunch, see you in an hour!"  WUT.

we had less than zero interest in eating anything, but everyone else sure swarmed that food table like they hadn't eaten in days. 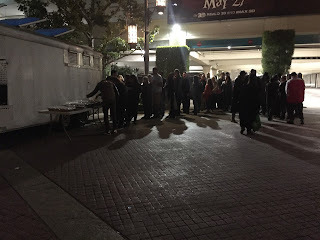 at least they brought in the nicer porta potties, although we didn't use any of them. 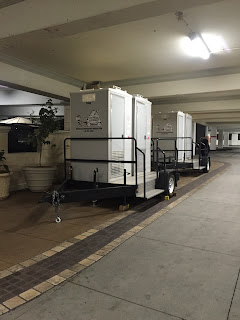 and we found sets near one of the heaters, which was nice. 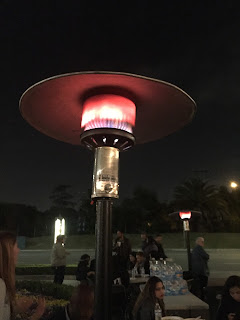 break actually ended about half an hour later, so we were happy to get back to our spots and hopefully finish up the job.  we noticed that about half of the extras seemed to have left, which i thought was kind of shitty, but whatever.  we stayed there and followed instructions for another hour and a half, and then as the first signs of daylight appeared the director jumped up onstage again and thanked everyone for coming.  he asked if there were about 20 people who were willing to stay for another 45 minutes, and released the rest of us.  and we were outta there.

we stopped for a bathroom break before leaving, and i noticed that they'd cleaned up all of their equipment and props pretty quickly. 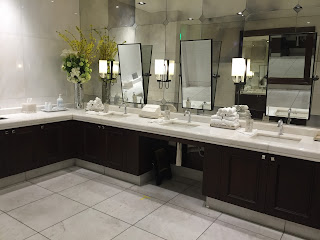 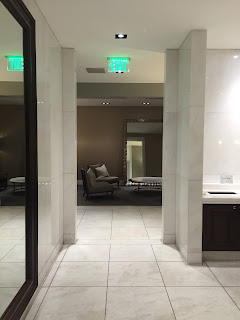 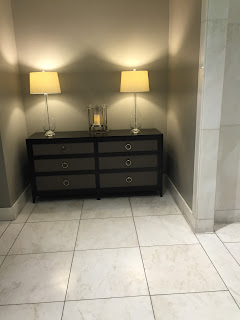 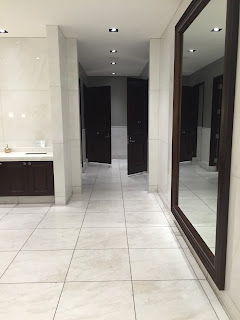 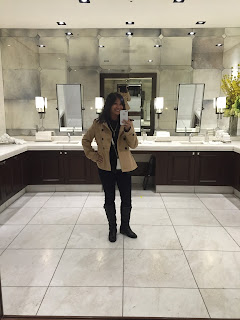 the old lady snapped this as we headed home.  the freeways were empty and the sun was getting ready to join the party.  it was close to 6am when we got home, and we were exhausted.  i don't think either of us had ever been up all night long like that before, and i don't know when we'll do it again.  i was seriously a zombie the next day.  but it was a fun experience, and now i guess we'll have to wait and see if i actually end up in the movie.  it'll be a long wait till 2017!
at May 05, 2016