she's cool for the summer

for star wars day last week - you know, "may the fourth be with you?" - the bean was allowed to dress accordingly for school.  and because she has so much freaking hair, i figured we'd make it extra fun with some leia buns. 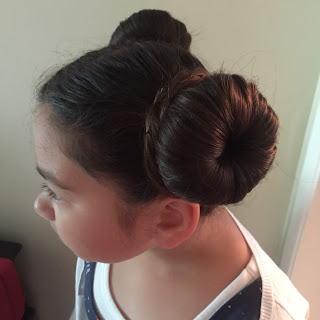 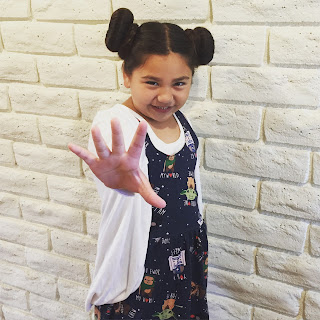 yeah yeah, i know that bun on the left side is pretty wonky looking.  this kid has a ton of hair!  it was a little difficult for me to wrangle it all into those two buns, let me tell you.

plus, i'm really glad she's still at an age where she's totally willing to wear stuff i make for her.  hell, she still has me pick out what she's going to wear for the day.  her sister at this age...not so much.  by the time that girl was 4, i couldn't even shop for her clothes solo anymore.  but this one, she's perfectly happy with whatever i pick.

her hair, on the other hand, is the one thing about her appearance that she is fairly picky about.  she'd been after me for months to chop off her hair, and i was succeeding at putting her off by telling her that we didn't know what hairstyle her dance teachers would want for the recital in june.  she asked one day during class though, and found out that they weren't being particularly strict about hair for either of the two dance numbers she's participating in.

and so after my struggle with those leia buns that morning, we made a phone call to the local kids' hair salon to see if they could fit her in that day.  and since it was in the middle of the week, they had an opening at the exact time we wanted it. she was stoked. 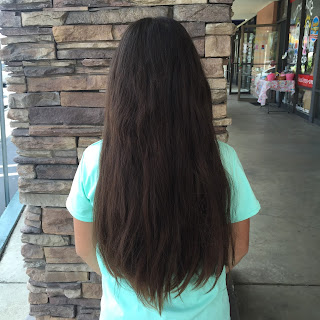 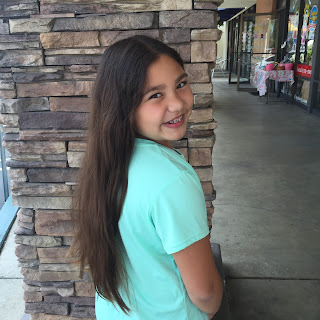 it really had gotten pretty stinking long, and looking closely at it all, she definitely needed a few inches cut off as the ends were looking kinda scraggly.  when the stylist asked us if we were donating it, she immediately nodded her head and i asked if we could measure out the required 9" minimum to see how short it would end up. 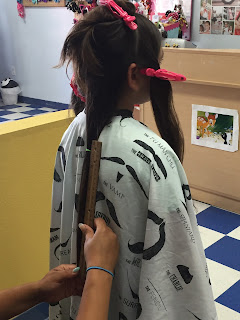 while that wasn't necessarily as short as SHE wanted it, i told her that we still needed a bit of length for me to do stuff with it.  she was after a chin-length bob, while i was having flashbacks of her sister at that age getting that exact cut.  that...didn't go well.  heh.  ooh, i'll have to dig up a picture of that.  haha, she'll kill me.

anyway, so the stylist got to work measuring, sectioning, and rubber banding all the way around her head and then started snipping away.  oh man, my kid was so excited. 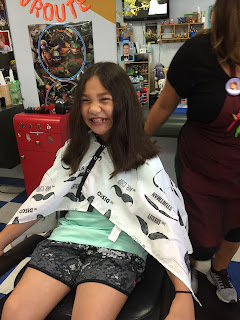 after doing a little cleanup and evening out the ends and all that fun stuff, she braided the sides so that the hair would be out of the way for the bean's tennis lesson later in the day.  voila: 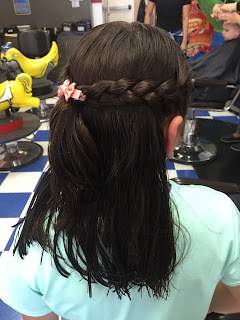 i think she liked it.  and she was amazed at how much hair had been cut off of her nugget.  hell, we both were. 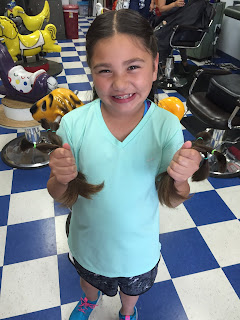 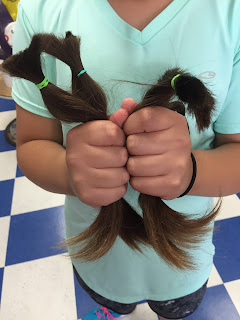 the old lady wasn't quite as thrilled as she was - probably experiencing the same flashbacks i did, but in a different way - but even she had to smile at how excited her sister was over her new 'do.  and the next morning, she asked me to use my instyler to smooth it all out so that she could debut it at school looking its best. 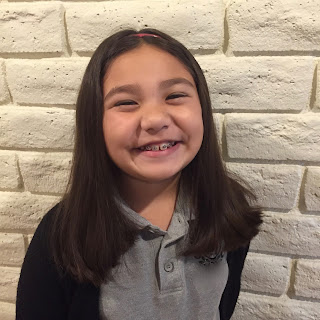 Email ThisBlogThis!Share to TwitterShare to FacebookShare to Pinterest
Labels: hair, the bean gets a new 'do