in da club on a saturday

seems like the prizes for selling 500 boxes of girl scout cookies this year are never-ending.  GSGLA hosts a giant party at a park called "club 500," and we were pretty excited to have five of our girls attend this year.  last year only one out of our troop hit it, so my co-leader and i were looking forward to seeing what the hype was all about.

the park is pretty far away - in the thousand oaks area, over an hour away from home.  we coordinated with one of the other moms and carpooled, which made it extra fun for everyone. 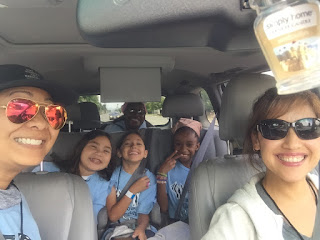 because it was fairly early on a saturday morning, we hit almost no traffic.  we pulled into paramount ranch, where everyone was directed to park, about an hour after the event began.  knowing that there were over 1,700 girls who qualified for this shindig, we figured it would be a major cluster when it started.  reading posts on the facebook page told me that we'd done the right thing, because i saw reports of people waiting for up to an hour to hop onboard one of the shuttles that took them from the parking lot to the actual party.  we encountered no such difficulty and were on an empty shuttle as soon as we could walk to it from the car.

i'd done the pre-registration at one of the local girl scout offices during the previous week and picked up our lanyards and wristbands to cut down even more on the wait.  VIP, suckas! 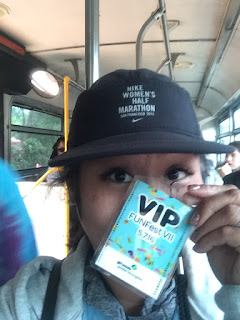 while waiting for others to join us on the bus, we perused the schedule for the day: 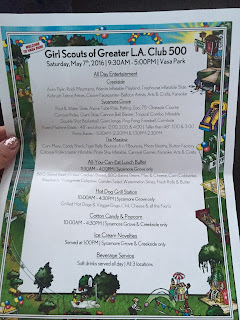 it was about a 5-minute ride, and then we were there at last. 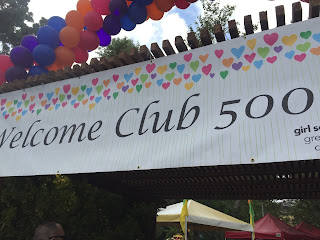 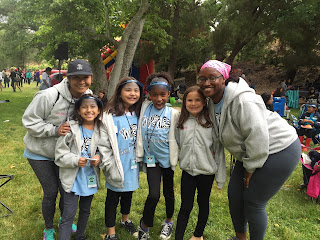 the only downside to arriving a little later was that the place was jam-packed with not a lot of options for seating.  we'd brought chairs and a blanket, and somehow managed to find a good-sized spot to park ourselves while the girls ran amok at their leisure throughout all of the rides and activities. 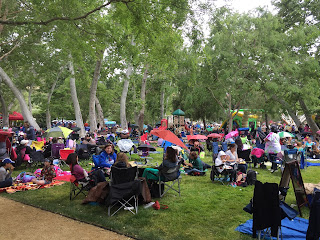 as they scampered off, we decided we wanted some food.  there was a buffet with some good looking BBQ'd grub, plus a hot dog station, a beverage tent and stations for popcorn, cotton candy and ice cream.  everything was included, all-you-can-eat, and no one had to bring a single penny to pay for a thing. 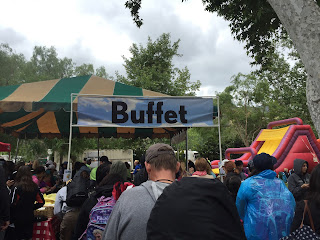 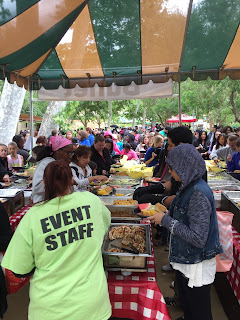 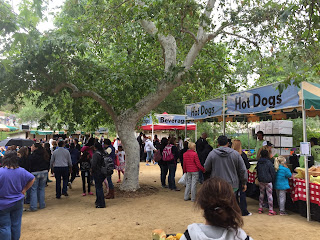 they were prepared for an army.  these tubs contained tray after tray of freshly cooked food that they replenished constantly as the lines continued to form behind us. 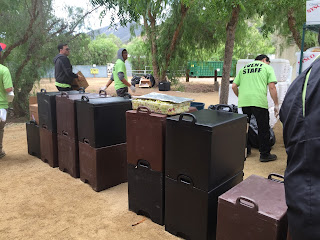 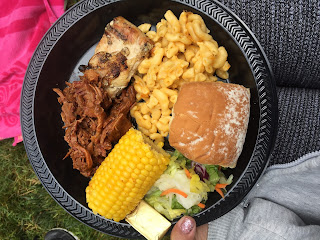 after i was done, i decided to accompany the girls to the line for one of the biggest rides at the park: 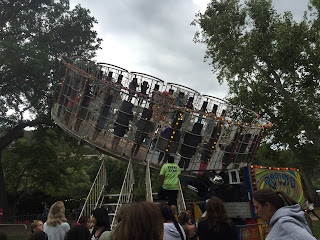 the bean was not at all sure she wanted to ride it, and i couldn't blame her.  i don't do spinning rides.  and while three of them happily climbed aboard, she and one other girl stayed behind with me and watched as they screamed and held their arms up.  no, thanks.

instead, she settled for this ride that also spun in circles.  blech. 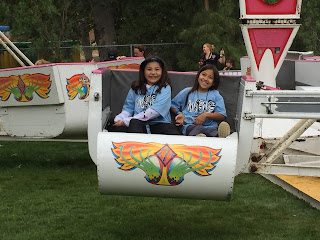 we managed to get them to come back and get some sustenance before heading back out to play and ride and play some more.  they spent most of the day either in the jumper or the giant inflatable slide, and even in the playground area.  and the park was huge - there were still chunks of it that we never even ventured into.  and while the others continued to play, the bean decided she wanted something sweet and grabbed herself an ice cream sandwich. 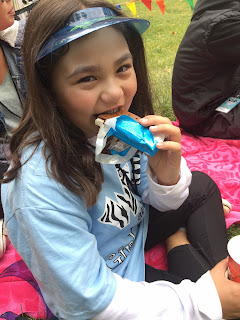 when it got to be close to the end of the event, we decided to brave the long line for popcorn and cotton candy for the ride home.  and as we got closer to the front, we realized why the line was moving so slowly.  only one out of the three cotton candy machines was working, and then you had people like this who sashayed up and asked for like ten servings of everything. 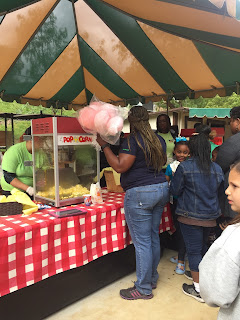 we got them to pose for a second under the banner before hopping back onto the shuttle with our loot. 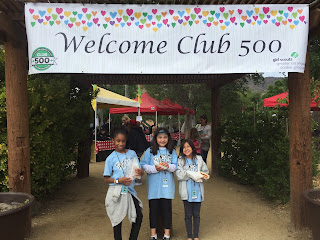 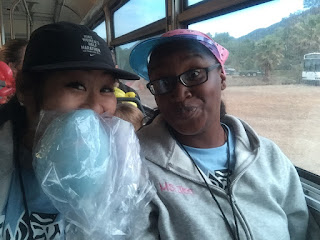 between the hours they'd spent playing hard, running around, filling their bellies with delicious food and then settling down in a moving car, two out of the three girls ended up riding home like this: 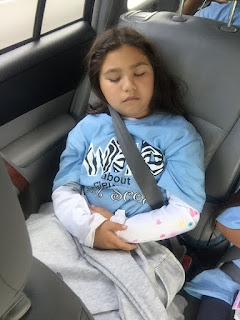