you already know that i get all sorts of ideas for fun-sounding shenanigans via social media.  while i was scrolling through facebook a couple of weeks ago, i came across something interesting...an open call for extras for a movie that was filming not too terribly far away with a couple of pretty familiar names starring in it.

so i'm going to be pretty vague about most of the details, because we all signed lots of paperwork, including this: 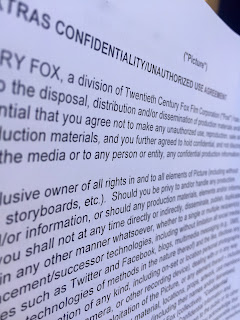 but anyway, as i was telling the old lady about it, she said that one of the things on her special friend's bucket list was to be in a movie.  she got right on the phone to have him request the day off, and when he confirmed that he was good to go, we signed up.

that morning, we got up bright and early and hopped on the freeway to get to carson by 8:00.  no easy feat, typically, but somehow the traffic gods smiled down on us and we arrived with more than enough time to spare. 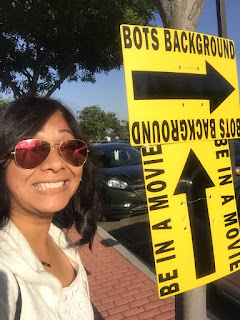 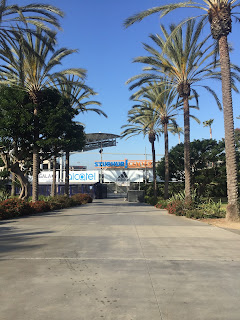 we joined the long line of other extras waiting for paperwork and instructions. it didn't take too long, and then we were escorted into the venue to find a seat and start the waiting game. 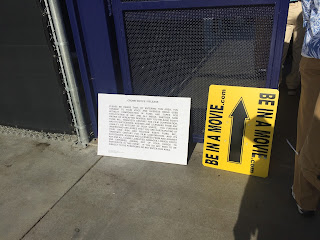 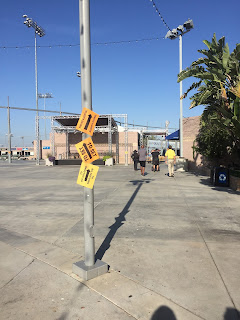 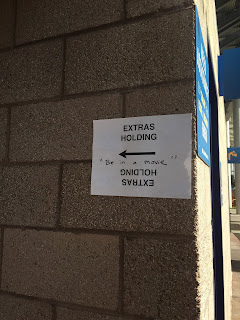 none of us had ever been to stub hub center before.  we're not really pro soccer fans, and that's what the main focus is here.  it's a nice stadium - not too big and it seemed like pretty much every seat would offer a fairly good view of the action down on the field. 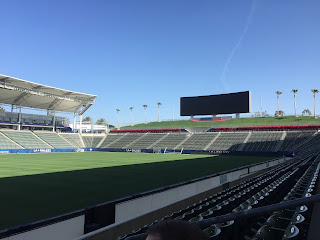 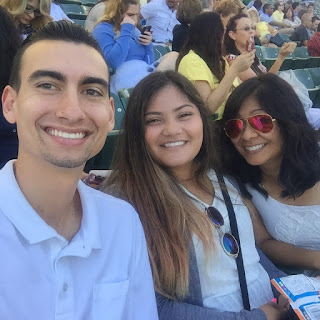 we'd been given lots of snacks, too.  there was lots of bottled water, all sorts of chips, granola bars and nuts.  snacks make everyone happy. 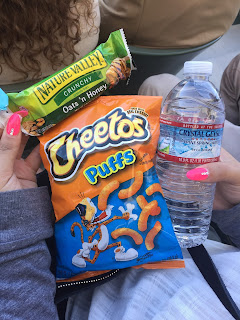 as the old lady and i had learned just recently, background "acting" requires a whole lotta sitting around doing nothing.  we chatted about all sorts of stuff, played on our phones, and at one point she was so bored she started playing with her hair. 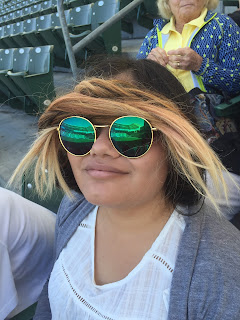 we finally got called onto the set somewhere around 10am.  because we were all wearing white (one of the colors on the approved wardrobe list), they separated special friend and he ended up sitting about four seats away from us.  that only lasted for a little while though, and we were all reunited not too long after that.

most of our time was spent sitting in the sun, watching actors and stand-ins play tennis.  we were moved from one section to another quite a few times, which may have gotten a little annoying to pretty much everyone after awhile.  and it was a good thing they'd informed us that it was okay to bring an umbrella to use as shade between takes, because while there was a decent breeze blowing through on the regular, that sun was blazing down on us.

because of my rule-following nature, i only whipped my phone out a couple of times during the whole four hours that we were out there.  we'd been instructed not to take pictures of the set, which was understandable considering this movie won't even be released until some time in 2017.  so when i snuck a peek, it was just to make sure that nothing had happened/i hadn't gotten any important text messages that i needed to see right away.  of course, all was well, and then finally they wrapped up the final shot of the day and we were all released with thanks from the director. 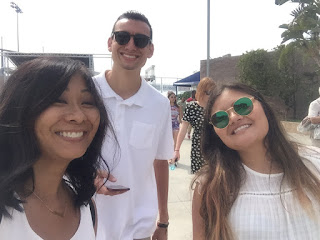 the old lady isn't really one to spend a lot of time sitting around doing nothing.  she got pretty impatient during the day, and said she probably wouldn't opt to do this again unless there was some sort of money involved.  i think i'm probably with her on that one, so i think we're done with this whole business.

except, of course, that my co-leader sent me information on several casting agencies that specialize in booking background actors and they actually do get paid for it.  no acting abilities are required, just a lot of patience with the whole sitting around doing nothing thing.  but i'd seen lots of people bringing books to read, study materials, crossword puzzles, all sorts of busy work that can easily be tucked into a tote bag.