months ago, i came across something that looked like one hell of a good time. 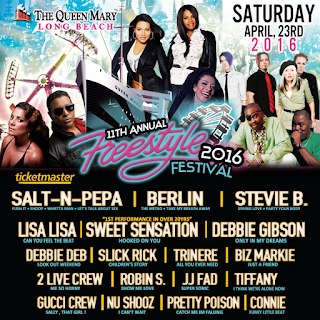 i immediately sent it out to a handful of friends - the usual suspects: lilcee, dailygluttony, kelley, and my co-leader.  there was a lot of online giggling and reminiscing and song quoting, and then we immediately decided to snag tickets.  so excited.

april seemed like it was so very far away at the time, but before we knew it, the day had arrived.  the group text was on fire that day, as we arrived in three separate cars from three different directions.  the entrance to the queen mary was insanely clogged with cars, and they were directing people to find parking offsite and take shuttle buses to the entrance.

somehow, though, my co-leader and i managed to sweet-talk the guy at the gate into letting us park in the vendor lot.  i don't even really know what we might have said that flipped the switch for him, but i didn't really care.  we were just a few feet away from the entrance, which i hoped would also mean an easy exit at the end of the night. 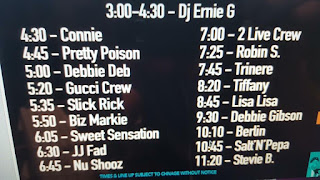 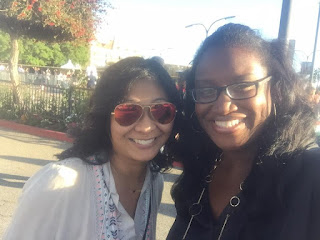 we met up with lilcee, mr. lilcee and dailygluttony at will call, where we needed to pick up our event tickets. 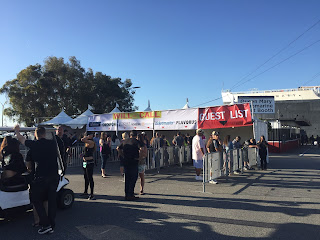 i found this rather amusing: 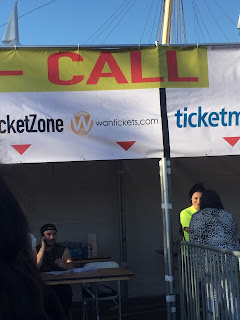 then we made our way through the line for reserved seats to the security checkpoint. 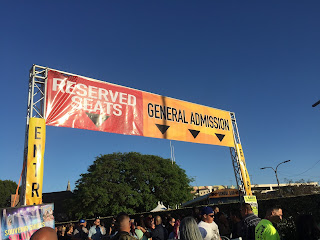 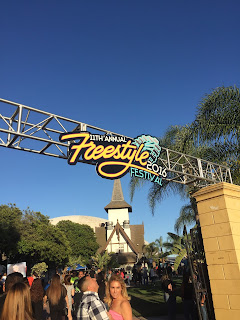 i was a little bummed that they ran out of wristbands.  i like event wristbands.  but that's okay...we still had our ticket stub to present to event staff to get through the ginormous general admission crowds and to our seating section.  look at the insane amount of people present: 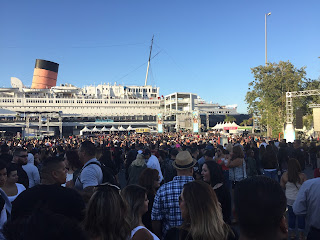 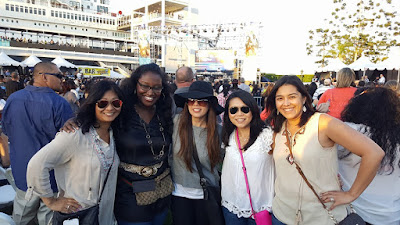 we'd managed to arrive just in time for jj fad to take the stage.  it was...SUPERSONIC. 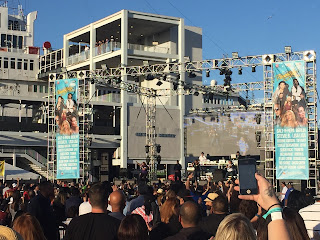 and as you can imagine at an event like this, there was lots of love for prince - from both spectators and the performers. 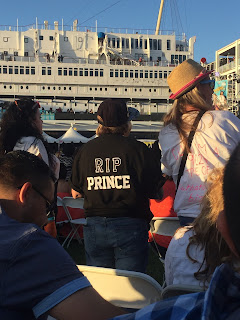 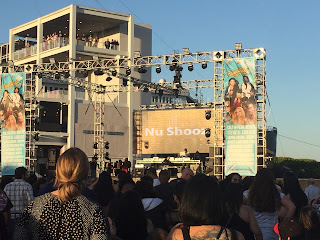 when 2 live crew came onstage, the music transported me right back to palm springs, spring break 1990.  we had this CD on continuous loop blasting from the speaker box in the trunk 24/7 back then.  the lyrics are so incredibly offensive and demeaning to pretty much all women on the face of the earth, but back then nobody really paid attention.  oy. 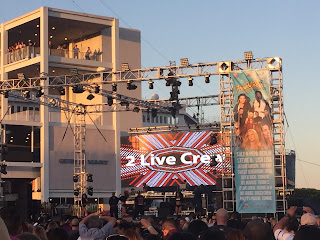 they had a fairly long set compared to the other acts we'd just seen, and while we slightly clutched our pearls at the songs they chose, i wondered how the people who'd chosen to bring their children to this thing were handling it.  yikes.

after they left the stage, we decided it was time to find something to eat.  trying to make our way through the ever-growing general admission crowd was challenging, but we managed to do it and ended up standing in line for pizza. 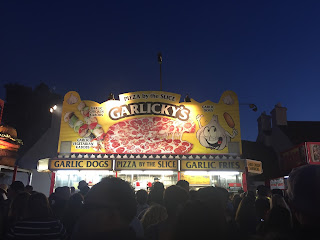 i gotta say, the peoplewatching at this point was nothing short of amazing.  there were attendees of all ages and races, dressed in everything from t-shirts and adidas to full-on club attire.  i saw all sorts of fantastic footwear - stilettos, wedges, gladiator sandals, thigh-high boots.  and then out of nowhere, one woman who was standing there placing her order for food literally fell over backwards and right onto the ground.  people around her helped her and tried to get her to stay there and wait for some assistance, but she insisted on popping right back up and disappearing into the crowd.  i hope she was okay and didn't have a concussion or anything.  geez.

this ferris wheel was free to anyone who wanted to ride it.  i'm surprised there wasn't any vomit flying through the air from the sheer amount of liquor being consumed plus the speed they were running this thing at. 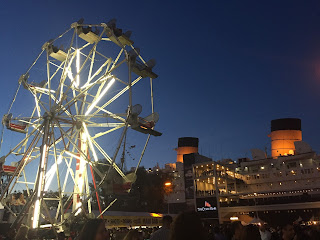 i was kind of excited to see tiffany take the stage next.  i totally used to belt out her "i think we're alone now" in my room all the time, and she sounded exactly the same as she did back in 1987. 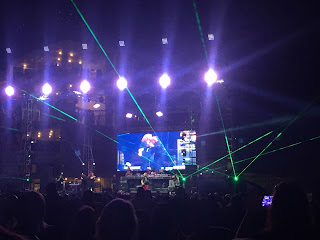 the MC dubbed the next performer lisa lisa "the queen of freestyle."  she sang all of her familiar old songs - "lost in emotion," "can you feel the beat," "head to toe," "all cried out - and we wondered at which point she'd ditched "the cult jam."  and listening to these songs, i found myself right back in my old bedroom in high school, surrounded by my posters and my purple boom box on full blast.  ah, the memories. 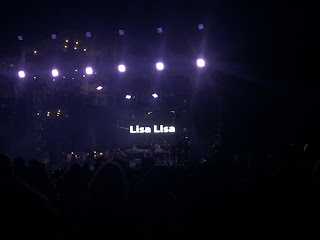 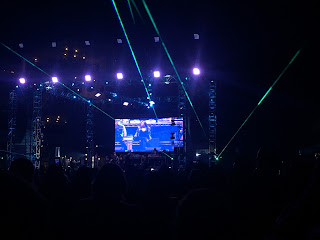 okay, so for me, seeing debbie gibson on the list of performers is what clinched it for me and got me to cough up the cash for this show to begin with.  i was a HUGE debbie gibson fan - she was a female singer/songwriter/producer at the age of 16, after all.  and i would listen to my tapes over and over and over.  i had a copy of her concert video on VHS and i'd watch it like every day.  i wore my little skater skirt over bike shorts and even the stupid black hat that i looked really dumb in, and i was a super fangirl.  heh.  so i was mega excited when she finally popped up onstage and started singing. 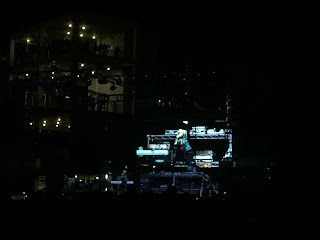 she looked the same and sounded the same, but for some reason they had her sound cranked up SO. DAMN. LOUD.  like, i know i'm old and all, but her set was on some kind of volume that was way higher than any of the other acts we'd seen.  that shit was ear blasting.  and for some reason, she'd chosen an unfortunate medley of her lesser-known songs.  it was not fantastic.  and then it got even worse when she announced that she was going to share with us another medley of her personal favorite songs from the 80s.  oy vey.  and when we didn't think it could get any worse, she kicked it off with "billie jean," complete with dance moves and backup dancers. 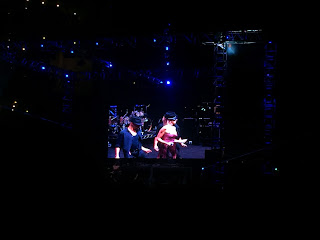 she finally made it stop when she stepped behind the keyboard and played the oh-so-familiar opening notes of her best song..."lost in your eyes." 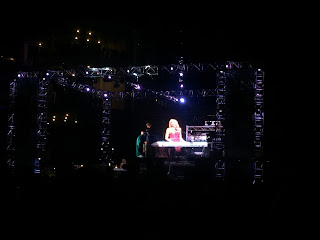 aaaaaand then she ruined it again when she said "come on everybody, sing with me!  PURPLE RAIN, PURRRRPLE RAINNNNN."  oh, debbie.  it definitely looks like my fangirling is going to stay in 1988, where it belongs.

after she finally left the stage, the MC came back out to announce a special guest.  "do y'all remember the song mentirosa??" he shouted as the crowd went wild.  and then mellow man ace appeared with a mic in his hand as the song started up. 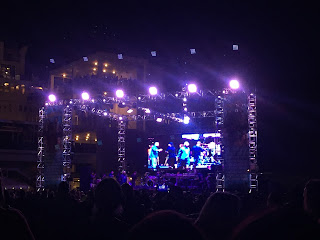 except that we couldn't hear him.  their sound system chose that moment to take a shit all over the place, and everybody blamed poor debbie for blowing it out.  the audience pretty much sang the song for him as he waved his arms around and tried to play it off.  i'm pretty sure somebody got fired that night.

berlin came on, and terri nunn looked and sounded exactly as she did back in the day. 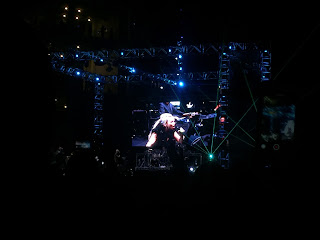 lilcee, mr. lilcee and dailygluttony decided to bail when she was done, leaving me and my co-leader to enjoy the salt & pepa set all alone. 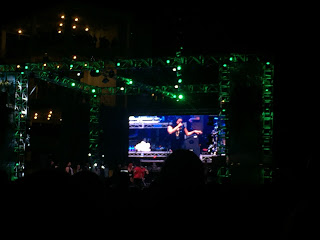 there was one more performer scheduled to close out the show - stevie b. - but we were tired and ready to get outta there.  not to mention, we wanted to avoid attempting to get outta there with the rest of the 10,000 other concertgoers.

luckily, we got right back to the car in no time.  after a little bit of weaving through crowds with no help from the staffers trying to direct traffic, we were outta there and on the freeway.  after dropping off my buddy, i was in bed by 1:00.

oh, freestyle festival.  thanks for the walk down memory lane.