if you can't run it, volunteer at it

with all sorts of things happening in my schedule for april, i wasn't able to join a team for the so cal ragnar race.  bummer too, because in previous years it's conflicted with the hollywood half, which always takes priority because i want to keep my legacy status.  and this one is practically in my back yard...sort of.  starting in huntington beach, the course takes teams of either 6 or 12 runners around 200 miles all the way down to san diego.  and from the looks of the pictures i saw, there were some really fantastic views along the way.

but since i couldn't run it, when sparkle athletic put out the call to volunteer on their behalf at one of the exchanges, i signed up.  i mean, the lure of earning sparkle bucks for free merchandise helped too, but i also figured this was the closest i'd get this year.  and i thought maybe i'd get to see some of my running friends too, which is always fun.

i threw on my favorite sparkle skirt - the rainbow one - along with my team supehero shirt and my ragnar vegas necklace.  gotta represent all my organizations, right? 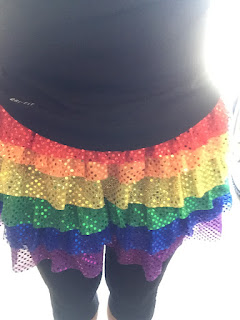 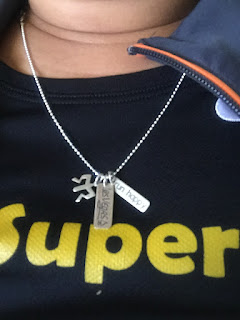 unlike the last time i volunteered with ragnar, my shift didn't start till 7:30.  it was nice and sunny by then, and the exchange was pretty much all set up. 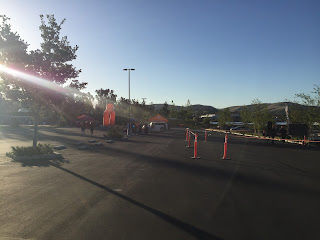 i checked in with one of the lead volunteers at this tent: 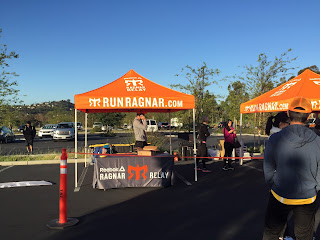 and then a bunch of us stood around for awhile until they figured out what to do with us. 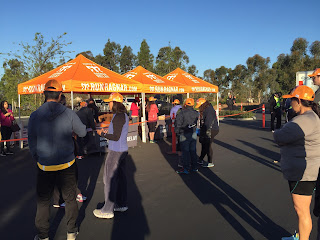 i decided to volunteer to help out in the t-shirt tent.  easy job, lots of activity, plenty of work to do, and the time would go by fast.  the shirts were mostly the same as the one i received in vegas - super soft and adorned with the ragnar logo on front and back. 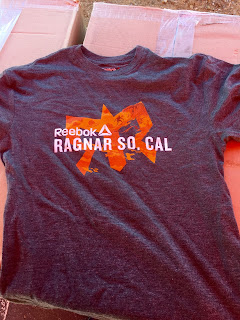 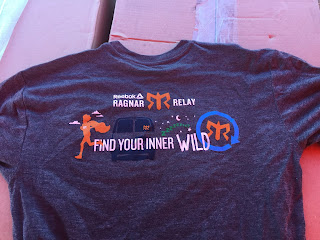 oh, and i got one of these fun hats to wear: 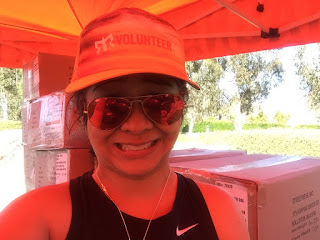 as predicted, it was busy, fun and easy.  there were, of course, a handful of people who wanted to treat us like dicks when things weren't running perfectly smoothly.  or when we didn't have answers to their questions.  and of course, the ones who wanted to sit there and try on shirts and exchange for different sizes with a long line behind them, even though we asked them to step aside to the other end of the tent where we were actually doing exchanges.  but there were also a good number of people who were there to have fun, smiled and joked with us, and thanked us for volunteering.  we had a good system going in there, and it was bustling with activity as soon as the first team arrived to pick up their shirts. 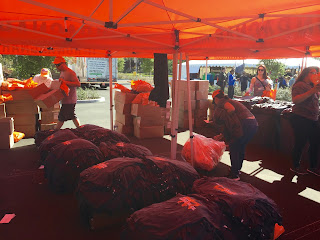 i saw friends from team superhero, xtend barre, my vegas ragnar team, even my crazy ragnar-addicted cousin who took this for me: 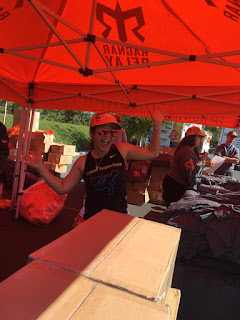 and before i knew it, it was noon and my shift was over.  i'd sweated my ass off, handed out hundreds of t-shirts, and had a great time.  gave me the itch to do a ragnar again...maybe vegas in november again?  we'll see!
at April 04, 2016