dinner and a show?

it's not often that we get to do a date night with another couple, especially one we enjoy spending time with.  actually, this evening was supposed to include a third couple, but with the holiday party season in full swing they went through not only their regular sitter not being available but their second, third AND fourth backups not coming through.  both couples are folks we actually met because of the bean - they're her BFFs' parents.  and while we don't really have a regular sitter of our own, she was able to spend the evening at her friend's house, giving us the chance to carpool to the restaurant.

we'd opted to try a restaurant none of us had been to before - alexander's steakhouse in pasadena.  i'd heard nothing but good things about it and it has a bazillion positive reviews on yelp.  i didn't really take any pictures of the restaurant itself, but there really wasn't much to show you anyway.  it's pretty simple and modern, with all the waitstaff dressed in full suits.  it was kind of a funny contrast to the handful of tables we passed that were occupied by folks in much more casual ensembles.

the menu told us before our server did that it was a fusion of japanese cuisine and traditional steakhouse fare: 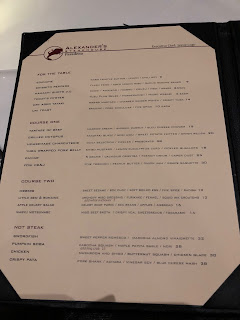 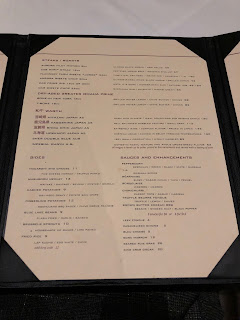 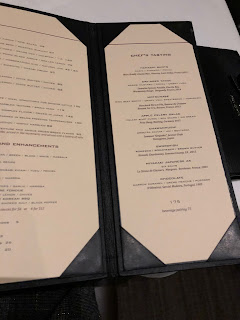 we ordered some edamame, warm and coated in truffle butter and lime.  the hub wasn't a fan, but i couldn't get enough of it. 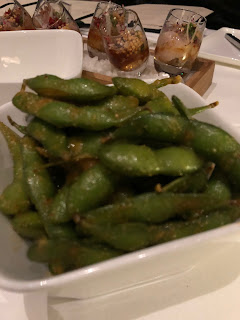 the item that kept popping up in those yelp reviews were the hamachi shots.  our server described them as deconstructed sushi, meant to be taken in one shot out of the shot glasses they were served in.  each order contained a 6-pack of them, which worked out as only three of us were interested in them anyway.  so you pick up a glass, stir the contents together and then shoot it - but i've never been good at taking shots, so i ate mine with a seafood fork in about three different bites. 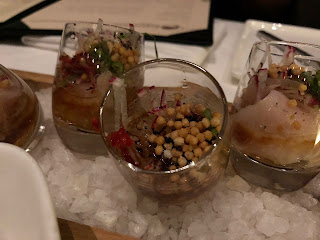 the yelp reviews didn't lie, by the way.  they were really good, and i kind of want to just go back and eat these all night long.  heh.  i'd also ordered a "gordon's cup," which was their version of a pimm's cup, and it was really tasty and delicious.  i was feeling pretty good by the time the bread service arrived, so i couldn't tell you what kind of bread was in the basket besides one made with squid ink and another one that had some sort of cheese in it that looked like a cinnamon roll.  and it came with four different spreads, one that was like a honey butter and served in what looked like a bone.  and another that had some sort of meat mixed into it.  i don't even remember - i just know i tried them all and they were all yummy. 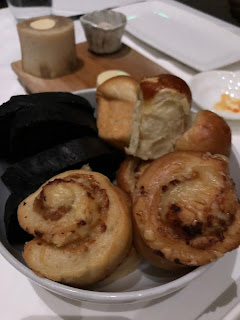 the charcuterie arrived not long after that, and it gave me flashbacks of the paté i'd tried at bouchon on thanksgiving.  that's not a good thing, by the way.  the server did explain everything else on the board - i heard things like cherry compote and liver and coriander, and i swear he said "intestine" or something like that. 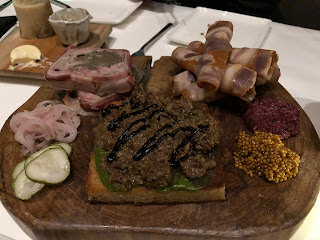 it was while we were exploring these items that we noticed the older gentleman who was sitting at the table next to us with what i'm assuming was his wife getting louder and more animated as time went on.  i'd seen him served at least one martini, and he was sawing into his steak like he was trying to do some woodworking.  anyway, i noticed him lean over to pick up the napkin he'd dropped on the floor, but he became disoriented and lost his balance, falling all the way to the floor in what looked like slow motion.  three of us at the table jumped up, with the hub making it over just in time to keep him from slamming his head against the table leg.  waitstaff and managers came rushing over as everyone helped him climb back up onto the bench seat, where he stretched out and waved away any offers to get medical assistance.  my friend, who's a nurse and had already had an adult beverage of her own, leaned over to take a look and said to me "he's fine!  just wasted."  hahahahahaha!

despite his quiet protests, the local fire department arrived with medical gear and a gurney within a few minutes (likely called by the manager immediately to make sure the restaurant didn't end up liable for anything).  they asked him what he was feeling, took his blood pressure, tried to keep talking to him as he drifted in and out of consciousness, and eventually took him away on that gurney.  his wife seemed as concerned as my friend, and she left the restaurant a few minutes after he was wheeled out.  we had what seemed like the entire restaurant staff come over to see if we were okay after the trauma of the evening, and we ended up having a round of drinks comped for the table.

main courses, anyone?  this was the 8-oz filet mignon that three of us ordered: 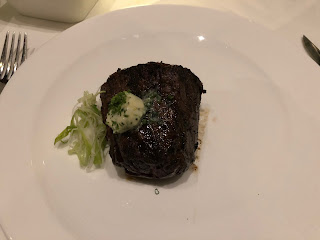 while the 12-oz prime rib looked like a side of freaking beef on a plate in comparison. 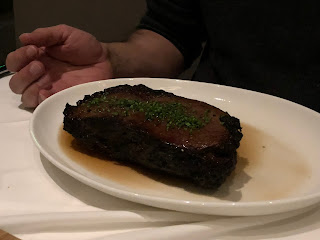 the brussels sprouts were really good: 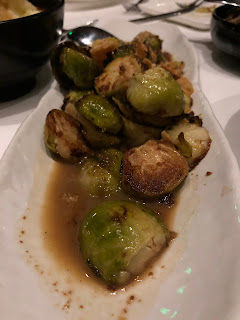 as were the sautéed mushrooms. 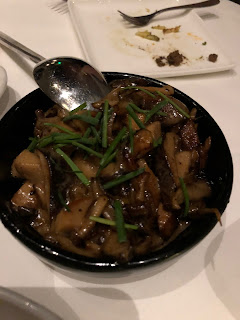 there were mashed potatoes too, but those don't really photograph well and you know what they look like anyway.  everything was super tasty, and the dessert menu offered things like a peanut butter souffle: 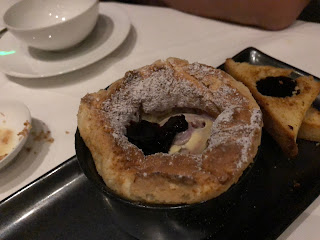 guava cheesecake (which was deep fried and added a fun texture): 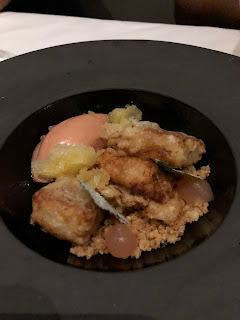 and a fun chocolate dessert that was served with gold flakes and popcorn sorbet. 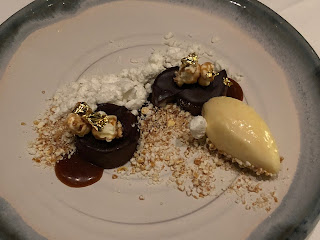 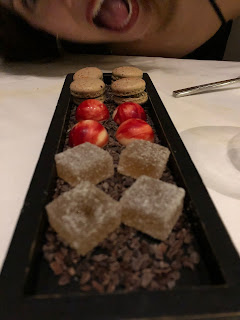 and later at home, two of those gordon's cups had obviously had quite an effect. 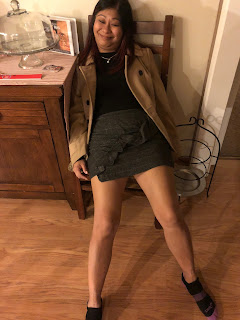 Email ThisBlogThis!Share to TwitterShare to FacebookShare to Pinterest
Labels: date night was fun, so not an alcoholic