a little disney magic fixes everything

with both the hub and the old lady back to work the day after thanksgiving, the bean and i were left to our own devices pretty much all day long.  we spent most of the morning hanging out in our pajamas, with me getting a little sewing time in while she just relaxed and watched tv and played with her bazillion different tubs of slime.

when the mail arrived, there were a couple of items for the bean.  do you remember when pixie the elfette made her final exit last year?   well, it seems that she remembered the bean when she arrived at her new home and decided to send the bean a postcard: 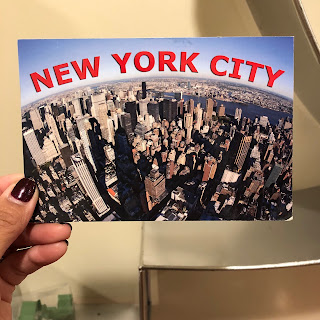 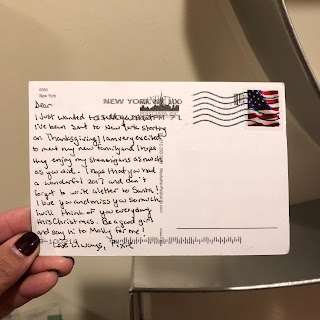 too bad that this didn't have the happy, magical effect that i'm sure pixie was hoping for.  no, in fact, the bean read every word and then dissolved into a puddle of tears. 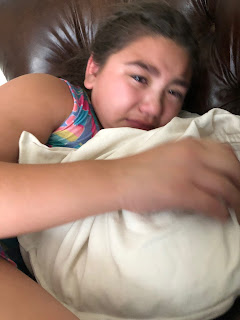 luckily, she had another piece of mail that made her much happier and distracted her from the sadness of missing pixie.  mini lilcee had written her a sweet letter and mailed it to her in an envelope that she had beautifully hand decorated, and so she got busy working on a letter to mail back.  phew.  crisis averted (thanks, lilcee!).

later on we decided to brave the crowds and headed down to disneyland to see if we could squeeze in a little magic to close out thanksgiving week.  shockingly, we hit no traffic on the way down, found a really great parking spot and boarded the tram with no elbows thrown.  getting through the turnstiles was a breeze, and we even managed to take a picture with minnie after waiting just a few minutes. 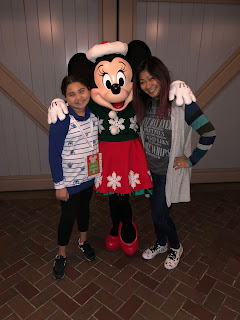 we headed over to tomorrowland and had some pizza and pasta at the restaurant next to space mountain, which had a wait time of 60 minutes.  blech.  but the sign at star tours said it was only 35 minutes, so we decided to wait that out instead.  plus, with the new movie coming out in a couple of weeks i'd heard that there were new scenes in the ride.

the quoted time was pretty dead on, and we enjoyed the new scenes and got even more excited to see the new movie.  we didn't get surprised with a guest appearance by mark hamill like a few other folks had a couple of weeks ago, but that's okay.  it was still fun.

from there, we went on the astro blasters ride that i typically don't like.  i'm not into spinning rides, and you sit in a rocket that goes up high in the sky and then spin around at a pretty good speed.  ugh.  but she wanted to ride it and i didn't want her to do it alone, so i went.  and i didn't throw up.  yay! 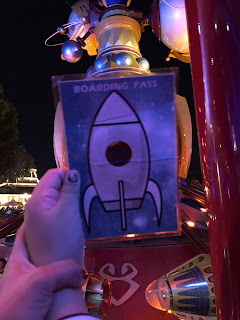 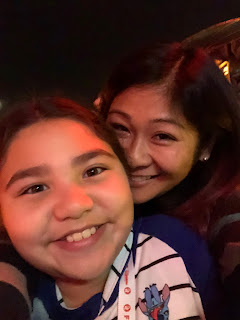 there were quite a lot of people lined up along main street, waiting for the fireworks show to start. 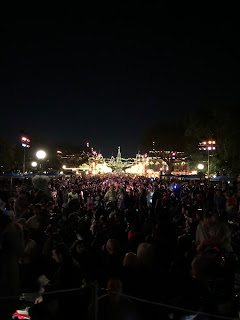 we decided to walk over to new orleans square for some candy cane beignets: 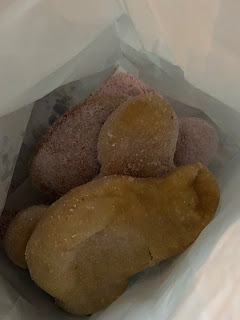 and because the fantasmic show was going on at that time, we slid right onto the disneyland railroad without having to wait even one second. 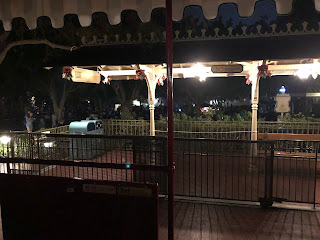 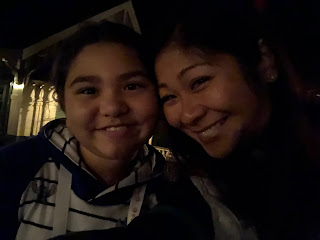 we almost got the entire grand circle tour around the park before hopping off at main street, where people were happily standing around watching the fireworks show.  this is always the perfect time to leave without having to worry about crowds at the tram, and so while everyone was looking up at the sky we scurried right past them and hopped right onto a waiting tram that was practically empty. 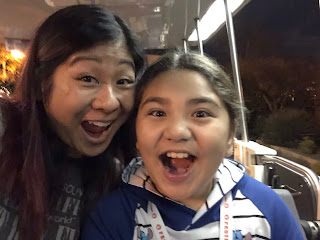 so we'd gotten dinner, rode a couple of rides, had a treat, and then got chauffeured right up to the gate to make an easy exit on the empty tram and no traffic getting out of the parking structure...all in a span of about three hours.  not a bad evening, i'd say.  not bad at all.
at December 01, 2017