KOST-ing right into the holiday season

the local radio station that plays christmas music 24/7 during the holiday season also does an annual private party at disneyland that i think combines an employee party with a fun giveaway for their listeners.  the old lady has literally been trying to win tickets to this thing for years - like when she was in high school.  when the christmas music started, so did the ticket giveaway - caller number 20 wins a 4-pack of tickets every hour, monday-friday, from 6am to midnight.  like she does every year, she started calling every single day as often as she could, and made sure i remembered to call too.  we tried and tried and tried, and as the date of the party came closer we started to lose hope and figure we'd try again next year.

and then on the day before the party, the bean and i were chatting on the way to school about how hard it was to win those tickets.  i explained to her that you not only had to call and actually get through while everyone in the greater los angeles area was calling at the same time, but that you had to be caller number 20.  and then i went on about how it would be really hard anyway because the party was on a thursday evening and didn't even start until 9pm, and that would make going to school the next day super hard.  and so i'd just dropped her off and was home making coffee when the old lady called me.  she doesn't call often, as we usually just text back and forth, and so i knew it must've been important.

almost as much as i was excited that she had won, i was bummed that i'd totally missed hearing her voice on the radio.  bah!

even though she'd basically won the golden ticket(s), her special friend opted out of joining us because his work hours just weren't going to allow it.  instead she invited the hub to come along, and while he's not the biggest disneyland fan he was pretty excited to go (and made sure she knew how much he appreciated being invited).

so after the bean got home from school and went to her thursday music lessons, i sent her off to bed to get a nice long nap in before our nighttime disney adventure.  she managed to get almost 3 hours of sleep before we got dressed and headed down to anaheim, armed with this letter that got us free parking once we arrived at the parking structure. 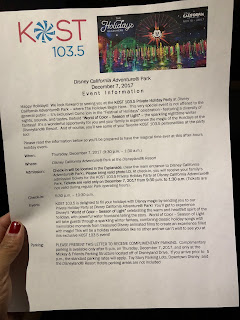 the party was on the california adventure side of the resort, which closed to the general public at 9 that evening to allow for the KOST party to have the whole park to ourselves.  everyone was arriving at the same time, so it took awhile to get through security and then onto a tram.  once we got to the esplanade, it wasn't hard to figure out where we needed to go to grab our tickets and wristbands: 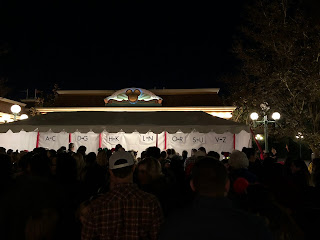 the check-in process was faster and easier than it looked, and in no time we were wristbanded and ready to enter the park. 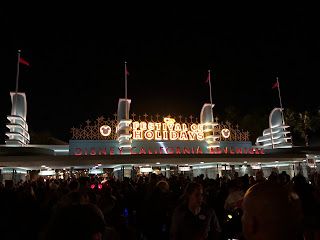 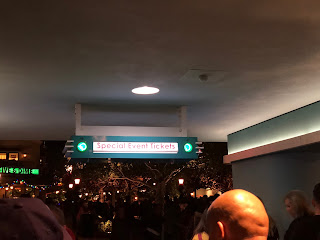 the instructions had said to head back towards the pier where the "world of color" show would kick off the evening's festivities, but we were hungry.  while most of the restaurants were closed for the evening, the festival of holidays food kiosks were open for business.  we ordered mac & cheese and the warm polenta with chilled crab salad: 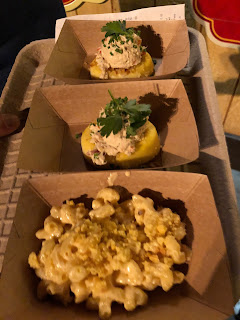 and somehow scored a little disney magic as they handed us one of the warm chocolate floats that had just been made for someone else who opted not to take it.  it was vanilla ice cream floating in hot chocolate with brownie chunks and whipped cream, and it was super delicious. 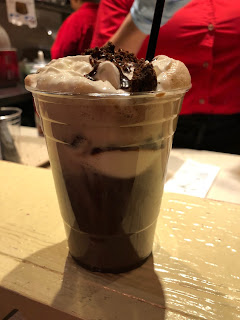 we made our way back towards the "world of color" and found the area wonderfully empty.  this is their signature nighttime water show extravaganza, and we've never experienced it without having to elbow through a huge crowd of people. 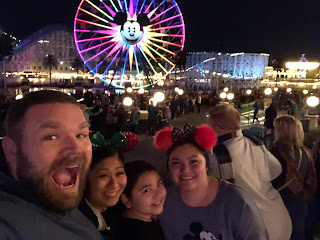 not too far away from us were two of the station's most well-known on-air personalities - ellen k and mark wallengren. 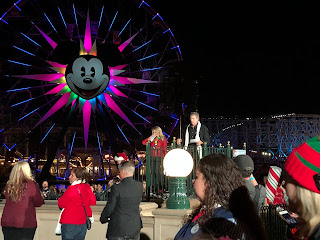 as they welcomed everyone to the party, they handed the microphone over to a guy who was waiting anxiously at the front of the crowd.  he'd made arrangements with them to give him the floor so he could propose to his girlfriend, who happily said yes. 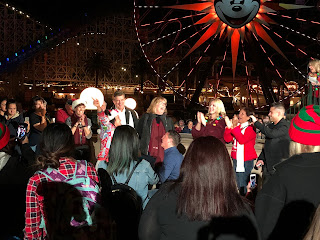 and then some holiday fireworks went off as the "world of color" show started. 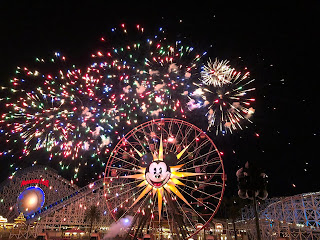 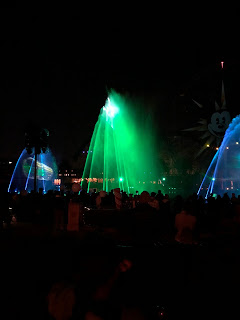 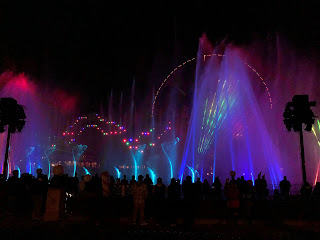 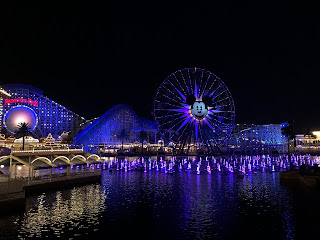 after it was over, we consulted the event guide to see what restaurants were open for business. 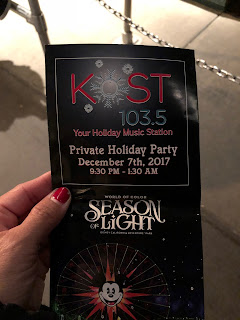 we ended up heading to flo's v8 cafe in cars land for some grub.  this was my turkey dip sandwich: 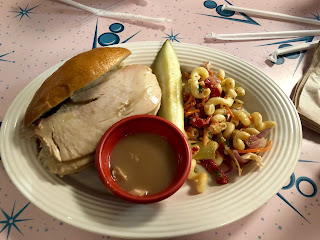 with a 70-minute wait for radiator springs racers (the entire party must've been there), we decided to head across the street to ride "luigi's joy to the whirl" instead. 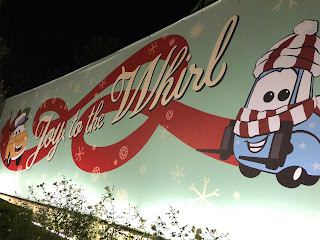 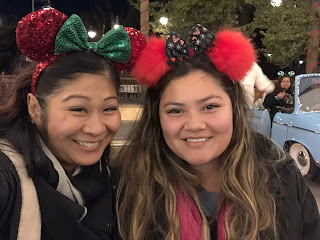 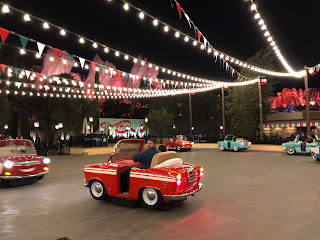 "mater's jingle jamboree" was next, with practically zero wait. 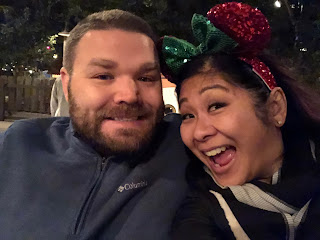 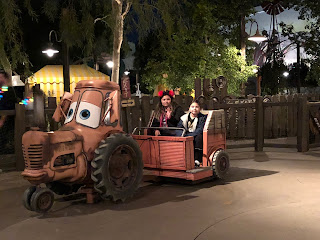 it was pretty fantastic to stroll through the park with almost no one to dodge and weave through. 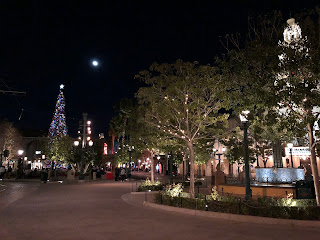 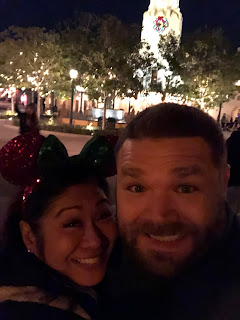 with time winding down to the end of the party, we decided to get in line for guardians of the galaxy.  it only had a 30-minute wait, and that's pretty rare - not to mention, the hub hadn't been on this ride since it switched over from "tower of terror." and i finally managed to get a decent shot of harold, the abominable snowman from matterhorn mountain!  he lives here now. 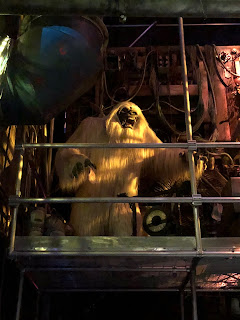 it was super fun, as always: 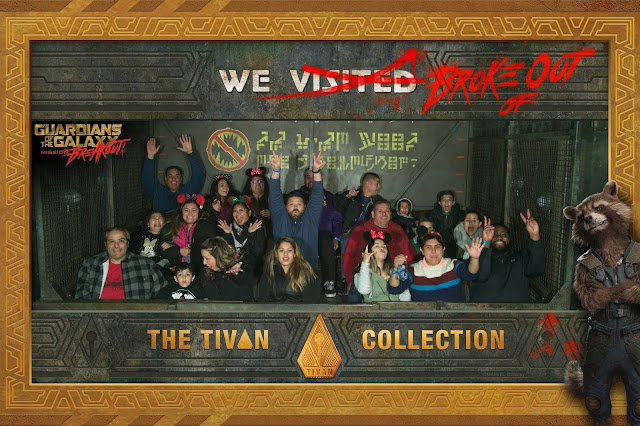 then we took a quick selfie in front of the tree: 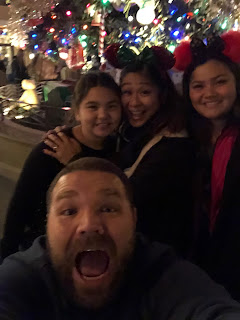 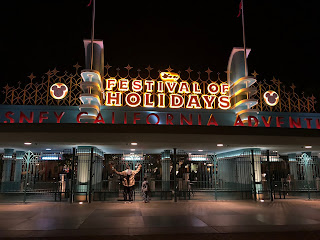 such a fun night.  we got home right around 1:00, with the bean snoring in the back seat almost from the moment we got in the car.  and she managed to get herself up for school on time, without a single "i'm tired" or anything.