our uber came to pick us up and take us to the airport early the next morning.  i looked out the window and got one last look at our hotel. 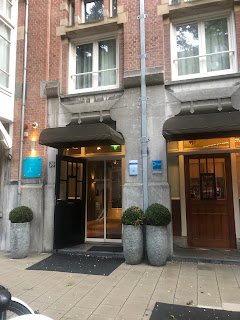 the airport wasn't very far away, and we arrived with plenty of time to check in and get to the VAT refund desk.  so i'm still not 100% clear on how it works, but basically when you buy goods in europe their sales tax is rolled into the price. this is actually really nice, because when you shop for stuff what you pay is what's on the price tag.  just seems simpler overall.  if you're not a citizen though, when you leave europe you can apply to have that tax refunded to you either in cash or to the credit card you used for purchase.  you just have to save your receipts and have them stamped at the desk at the airport.  then you either take them to another desk for your refund or in some cases (which i still don't really understand) you have to mail the receipts in the special postage-paid envelope they give you.  so after a little bit of back and forth trying to find the right counters to get our refunds processed, we found this orange mailbox and dropped in our envelope. 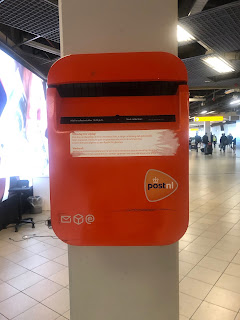 we still had a good bit of time before our flight boarded, so we went off in search of food. 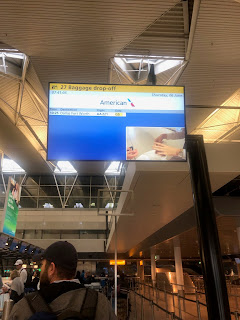 despite mr. keto's dietary restrictions, we ended up here: 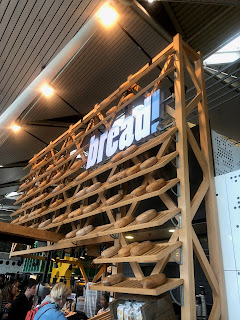 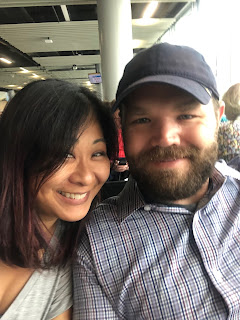 he allowed himself what he called his last beer of the trip, and skipped the bread portion of his meal.  priorities. 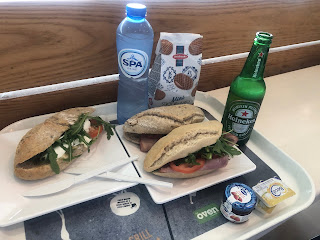 i was amused at this sign i spotted as we were boarding. from amsterdam to dallas?  culture shock, indeed. 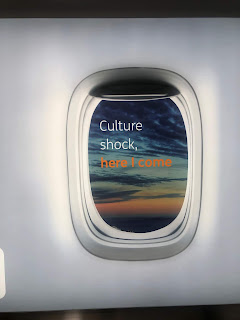 so once we found our seats and put our bags in their proper places, i finally busted out something i'd bought from one of those facebook ads in anticipation of the long flights to/from europe.  this is a footrest that hangs from the tray table in front of you, and i was excited to give it a shot.  we were going to be on this plane for 9 hours and i wanted to try to get as comfortable as i could. 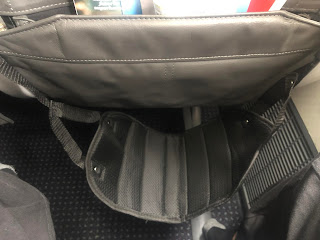 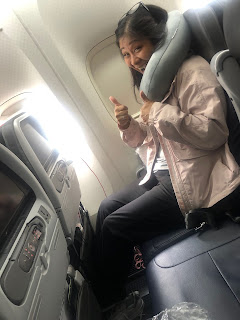 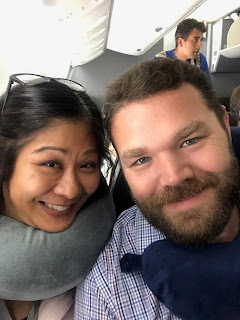 we got lucky and didn't have a third person in our row, which was fantastic.  i always hate having to bug someone when i have to take a potty break, and especially on long flights like this since most of the time they're sleeping.  and so this gave us a lot more room to work with, and we got comfy pretty easily as we took off and left the netherlands. 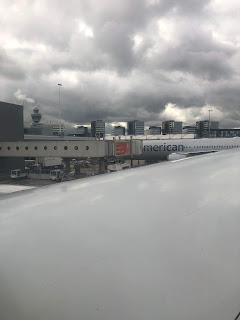 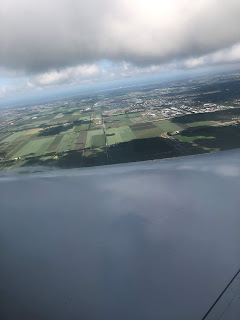 you already know i love airplane food.  so weird, i know.  and so i was stoked a couple of hours into the flight when the attendants came by and offered us a choice between pasta and chicken.  the chicken was served with rice, teriyaki sauce and veggies - plus a salad, roll, cheese and crackers, and a square of carrot cake.  yum. 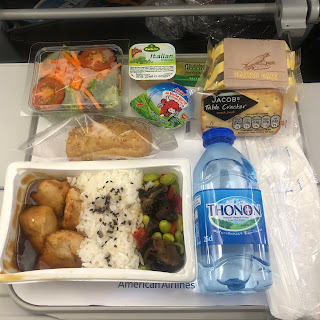 the hub and i ended up spreading out over those three seats and spooning as we slept.  hahahahaha.  we must have looked ridiculous.  i was slightly envious (okay, super jealous) of the dude who was in the center row - the one with five seats - all by himself, because he was able to stretch out fully and sleep pretty comfortably.  but i really can't complain about our sleeping situation because it wasn't bad at all.  and a couple of hours later, the attendants served up cups of chocolate ice cream.  and then a couple of hours more yielded a super delicious pepperoni pizza wrap.  it was kind of like a hot pocket, only better. 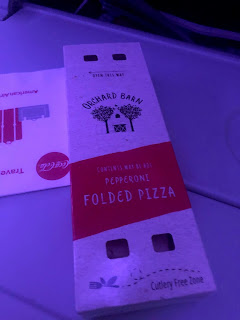 and before we knew it, we were landing in dallas and getting off the plane.  someday i would love to sit in first class in one of these fun-looking pods, but this was not that day. 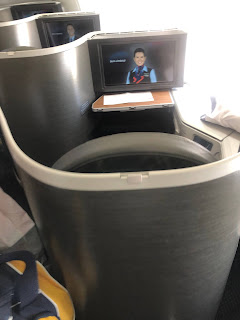 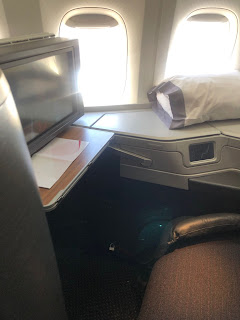 back on american soil! 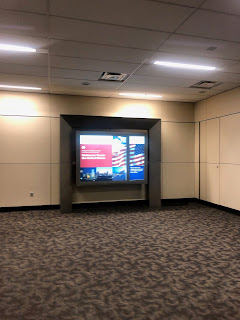 we had to go through customs, and were both really impressed at how easy the self-service kiosks were despite the long lines we stood in.  you scan your passport at the kiosk, have your picture taken and then take that through the customs desk.  my photo was lovely. 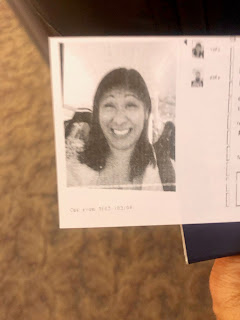 i was a little bummed that we were so close to the bean at this point but didn't have time to see her.  DFW is just about a half hour away from where the ILs live. 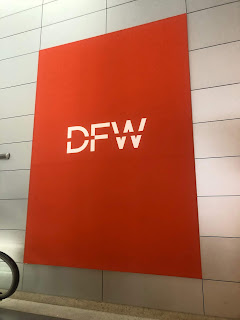 coffee!  i needed some. 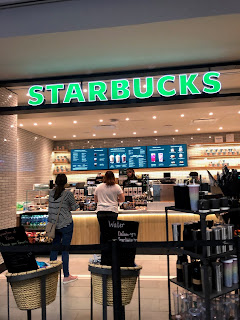 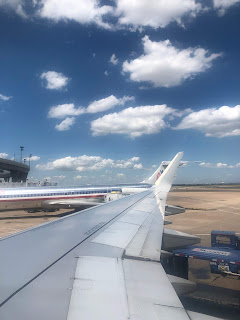 and hello, LAX.  after about 14 hours of flying, we home! 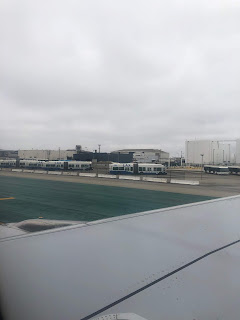 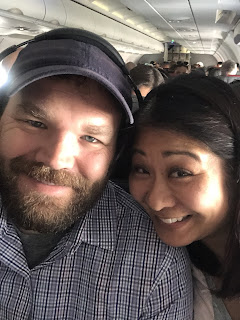 the suckiest part was that we landed around 4:30 on a thursday afternoon.  this meant we were looking at a bitch of a drive home in rush hour traffic.  what should have been a 45-minute drive turned into 3 hours.  and i felt so bad because i knew the hub was just as wiped out as i was, yet he powered through that drive while i ended up snoring in the passenger seat.  he's such a good sport.

and when we got home and walked into the house, the old lady and her special friend had gone through and opened windows to bring in some fresh air and left us with this.  i may have teared up a little. 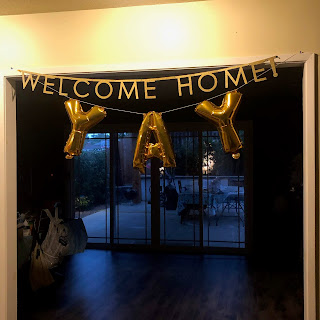 i wanted to see her so bad, but it was late.  i haven't been away from my children for this long, like, ever.  we'd had a wonderful trip, but we were both ready to come home and see our family.  and you know what else was awesome?  we'd been together for almost two weeks straight and not once did we argue about anything.  not even any bickering.  it was just 12 days of being together, experiencing new things, enjoying each other's company and touristing together.

this bodes well for our imminent future as empty nesters.  heh.
at July 01, 2019

Email ThisBlogThis!Share to TwitterShare to FacebookShare to Pinterest
Labels: going home, leaving on a jet plane