i woke up after a very restful solo sleep in my king-sized bed and decided that the carrot cake i'd ordered with room service the night before would make for a perfect breakfast.  i'd been so full from dinner that i hadn't had any room for it, so it worked out well.  carrots and eggs and nuts...that's good, right? 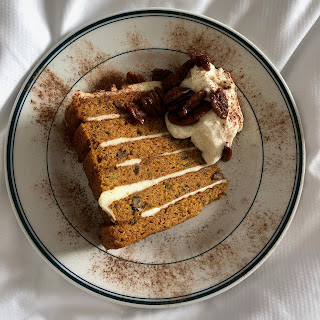 the panels didn't start until 11, so i found a spot to get a pedicure.  it wasn't too far from the hotel, and it turned out to be one of the nicest nail salons i'd been to in a long time.  everyone was really nice, the service was great.  i wish it were closer to home, because i'd totally make that my regular spot. 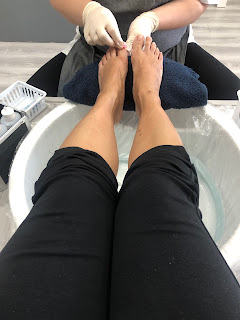 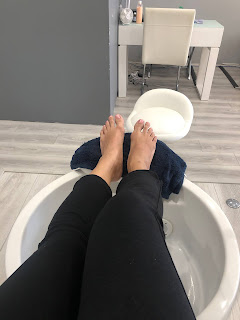 i headed back to the hotel to get changed for the day and get down to the ballroom for the first panel.  outfit of the day: 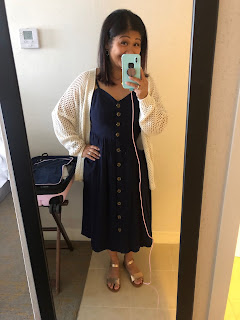 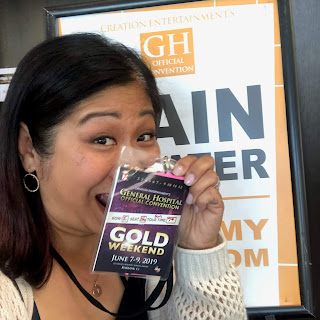 laura wright took the stage to welcome everyone to day 2 and introduce the first pair of cast members. 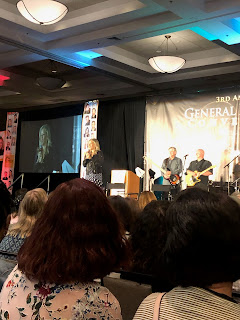 one of them happens to be her real-life love, wes ramsey ("peter"), and the other is kirsten storms, who's played "maxie" for years and years. 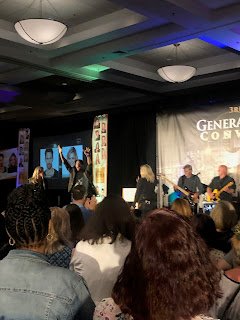 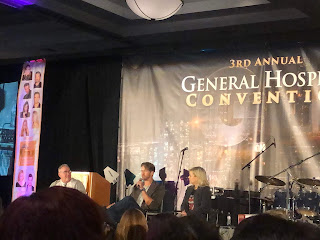 kirsten was my first photo op for the day.  i told her that she should host a sewing party for the next convention, and she giggled and said that she was knitting backstage. 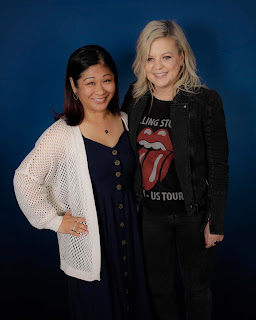 my seat for the weekend was E36, right on the end and easy to get in and out.  might not offer the best view ever, but it was good. 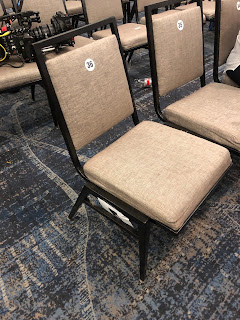 the next panel was with a couple of GH veterans - wally kurth ("ned") and leslie charleson ("monica").  it was fun listening to their stories about actors who have come and gone and storylines from the 80s and 90s. 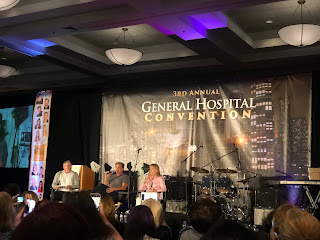 frank valentini, the executive producer of the show, came out to say a few words and thank everyone for coming. 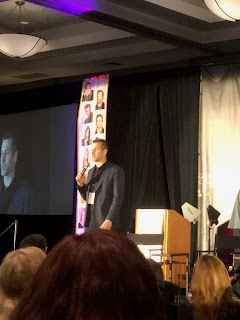 my next photo op was with "valentin," played by james patrick stuart.  while all of the cast members were really friendly with everyone, he was the only one who actually came over to the line of folks waiting to meet him and say hello.  "why am i so far away from you guys?  i should be closer to you!" he said as he came over to shake everyone's hand.  such a nice guy.  and when it was my turn he smiled and said "what a gorgeous dress!"  i may have blushed. 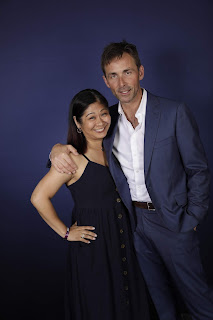 and then he took the stage for a panel with michelle stafford, who was wrapping up her run as "nina" on the show.  it was clear from the way they bantered with each other that they were close friends, and it was fun to listen to them as they chatted and answered questions from the audience. 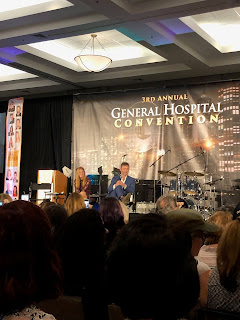 laura took the stage again to introduce the house band, who played sets between panels. 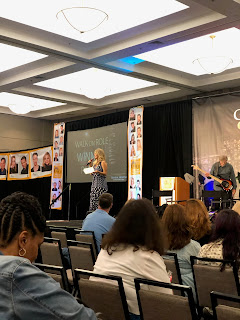 i went out to check out the merchandise again and spied this posted on the wall.  that's a big nope. 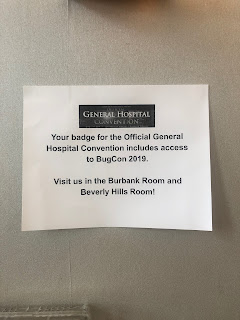 it was time for my last photo op of the day - with steve burton ("jason").  i've been lucky enough to meet him once before, and when i mentioned it to him he gave me a kool-aid smile and said "oh my gosh, that was a LONG time ago!"  i said "yeah, i had my baby on my back that day too!" and he said "oh wow, she must be big by now!"  it was fun. 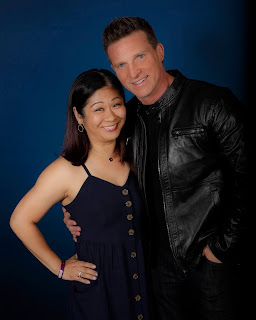 his panel with laura wright was really entertaining.  they play best friends on the show, and are clearly the same in real life . he told lots of hilarious stories, and the time went by really fast. 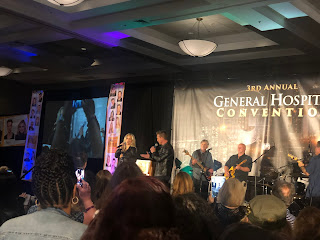 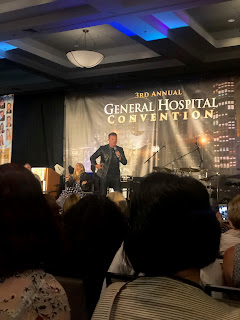 frank valentini was in the audience too, sitting in the "reserved for VIP" section next to me. 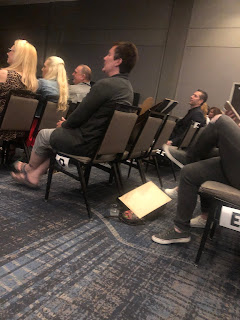 they were the last panel of the day, and then the "no photos please!" autograph session came after them.  i brought my tote bag and got it signed by a good number of cast members.  michelle stafford had the longest line because she took the time to chat with each and every one who stood in line for her.  it was really nice, but also made for a really long wait.  it took her so long to get through the line, and they ended up having to move her outside to finish up so that they could set up for the concert.

one of my old knot friends had driven down from santa barbara to join me for the last day and a half of the convention, and she'd arrived during one of the panels.  her seat was across the room from me, but we managed to connect before heading off in different directions to grab some dinner before the concert.  since i'd passed on the karaoke the night before, i figured i might as well see at least one of the evening performances and we planned to meet up so we could sit together.

the house band took the stage for the first part of the show, and it was clear that they had their own group of fangirls.  we were really amused and giggled through most of the show, and then wally kurth came onstage to join them for a few songs. 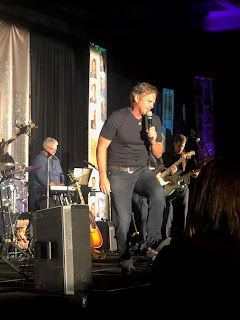 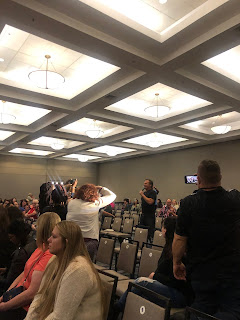 james patrick stuart came out for the last couple of songs, and then after a rather impressive performance on the drums during a rendition of "jesse's girl" he ended the show with a quick duet with wally and a wave to the audience as he exited. 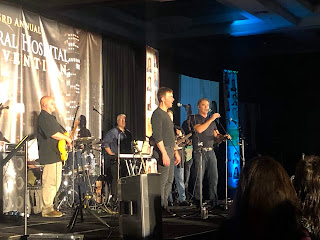 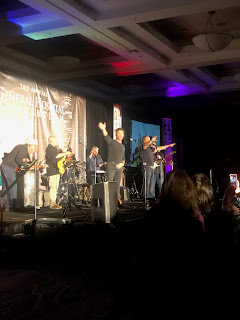