pretty sure i'm getting too old for this

so you know how i love a good bargain...because after all, who doesn't?  one of my favorite clothing websites, morning lavender, announced their annual warehouse sale via instagram a couple of weeks ago.  they posted some sneak peeks of what was going to be available and after skipping it last year i debated whether or not to head down.  the threat of FOMO finally got to me the day before the sale, and so i decided to go for it.  i remembered seeing some pictures of last year's event, where there was a good-sized lineup of folks waiting to get inside, and so i knew i had to get there early.

with the doors scheduled to open at 8, i set my alarm early to make the drive down to tustin on saturday morning.  i managed to get out of the house just before 7, and even after a stop at starbucks i found myself pulling into the parking lot around 7:30 thanks to zero traffic on the freeway.  as predicted, there were already quite a lot of people there and since i was rolling solo i couldn't take the time to check out how long that line was before i got in it. 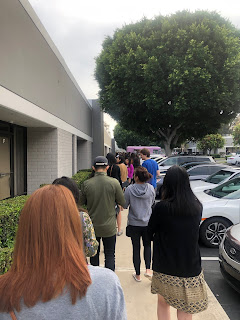 there were lots of ladies there in groups and in pairs, and i spent a lot of time catching up on social media as i stood there all by my lonesome.  at 8:00 on the dot the line started moving, and the first group of shoppers were happily allowed access to the goods.  there were signs posted on the building as we inched forward: 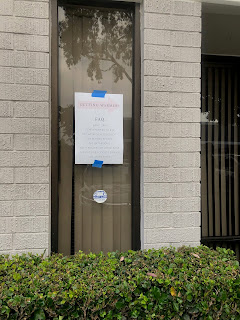 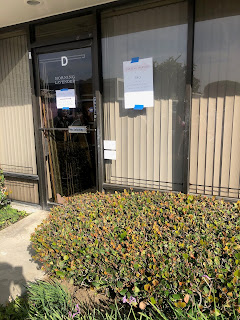 the brick-and-mortar shop also features a cafe where they do tea, coffee and afternoon tea.  and as most businesses in this age of millennials do, they have a mobile truck as well.  today, they were parked here serving up free cups of iced lavender milk tea or vietnamese coffee.  since i'd already had my coffee and had no idea if there were any restrooms available nearby, i didn't hit it up.  it was a nice touch, though. 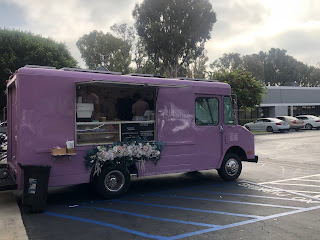 as the line continued to grow behind me, we moved up about 15 feet or so every - oh, probably 20 minutes or so.  this made for a pretty long wait, and i prayed that the battery on my phone wouldn't die out on me before i got inside.  it was providing some necessary entertainment and distraction from the incessant chatter around me, and it occurred to me that maybe i shouldn't do things like this anymore.  or, at least, not without a buddy.  i knew i should've hit up my friend lilcee to come with me, but since it was sort of a last-minute decision i hadn't thought of asking her until it was too late.  and i was so glad i hadn't dragged the bean along, because that would have been miserable for the both of us.  she's actually a pretty good sport (especially if she has her ipad in hand), but without a payoff for her at the end there's no way i would've made her sit through that.

after a good 1.5 hours, i made it to the corner of the building.  progress! 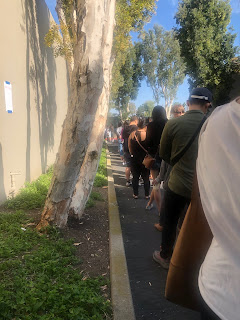 it took probably another hour and a half before i got to the other corner.  by this time i was definitely regretting the whole thing and hoping that it would be worth it once i got inside.  if i ever did. 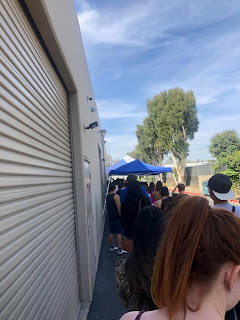 seeing the light at the end of the tunnel made the wait seem even longer.  there was a lot of anticipation and excitement around me as we crept closer and closer to that door. 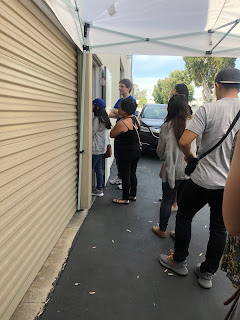 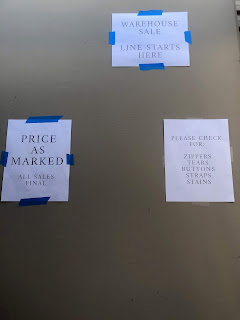 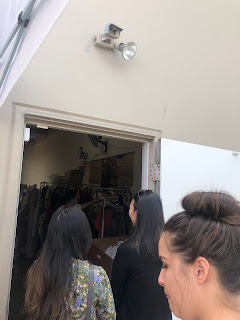 the staffer at the door handed everyone a large plastic bag and welcomed us in as we came through the door.  the first thing i saw was this rack of pretty dresses that serve as morning lavender's signature look.  as i browsed through the rack i figured i'd probably never have a occasion to wear any of them, and although there were a couple that caught my eye - and only $30! - i walked away empty-handed. 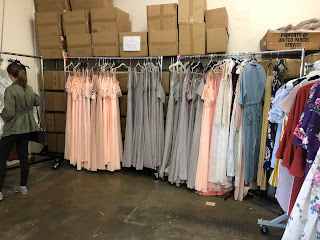 i didn't have any better luck here, either. 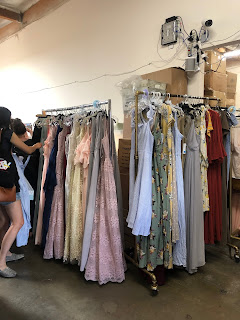 each item had a color coded dot on the tag, and these were posted everywhere so you knew what you were going to pay for them. 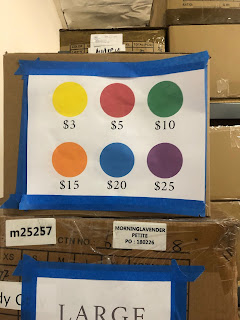 back in one corner i came across a whole bunch of floaty chiffon skirts...the kind i'd seen so many women in europe wearing with their white leather adidas.  i found a good number of them in my size, and with a $10 price tag i scooped up three of them.  there were girls standing behind the racks frantically trying on the clothes they'd picked up, and so i found myself a spot and tried on one of the skirts to make sure they'd fit since everything was, of course, final sale.  i was pretty amused at those seasoned warehouse sale shoppers...they came dressed in easy-to-remove clothing and sports bras underneath.  fitting rooms aren't usually available at these things, so they were prepared.  very wise.

i found a few pieces that i thought the old lady might like, and made sure that they were things i'd wear myself in case she decided to pass on them.  i picked through a couple of piles like this: 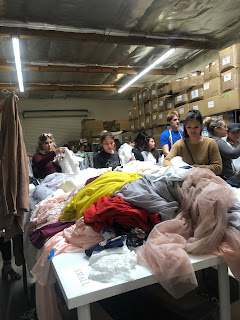 and then after taking one more turn around the floor to make sure i hadn't missed anything, i got in line to check out.  this gave me time to sort through the things i'd picked up to make sure i really wanted them, and after pulling out a dress, a skirt and a couple of tops i ended up with just my three chiffon skirts along with a dress, a pair of pants and a top for the old lady.  although there was a kind of "last call" table just before the door to the cashier: 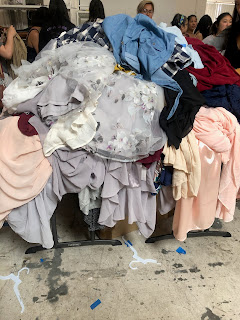 and here i managed to find myself a cute top and dress that were just $5 apiece.  yay!  and just in time too, because i'd finally gotten to the check-out counter. 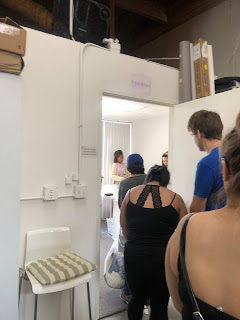 four hours and $78 later,  i was finally outta there. 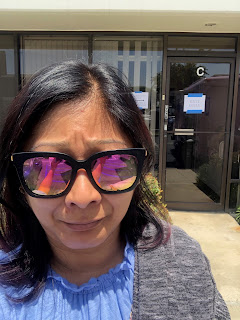 was it worth it?  well...i'm still not sure.  would i do it again?  if you'd asked me at that moment, the answer would've been a resounding HELL NO.  but now that i've had some time to recover from it all, i think i might be up for it again only if i have a shopping buddy with me to pass the time while we wait.

Email ThisBlogThis!Share to TwitterShare to FacebookShare to Pinterest
Labels: i'm an old ass, wan is a bargain shopper