it's time for dodgers baseball 2.0

a few weeks ago, lilcee invited me and the bean to hello kitty night at dodger stadium.  while i'm usually all about anything hello kitty, it happened to be on a tuesday evening - which meant that the bean had cheer practice.  bummer.

and then late last week, the coaches somehow realized that the team hadn't done their annual team bonding outing at a dodger game this year yet.  you know where this is going.

neither the hub nor the old lady and her special friend had any interest whatsoever in joining us, which wasn't a big surprise.  the bean and i RSVP'd to the cheer group and then i let lilcee know that things had magically turned around and we'd be able to at least see them at the game at some point.

now because i'm super lazy and hate driving out to the west side unless i absolutely have to, i'd hit up my cheer mom/sister wife to see if they were going and if they had room for us to carpool with them tot he game.  and then at the same time, lilcee asked me if we wanted to ride with her, mr. lilcee and mini cee.  quite the conundrum, huh?  well, it just so happened that riding with our cheer friends didn't end up working out after all, and so the bean and i headed out to pasadena to park at lilcee's house and drive in to the game with them.

it was a warm, muggy evening at chavez ravine - but at least the sun was going down and starting to cool off a bit. 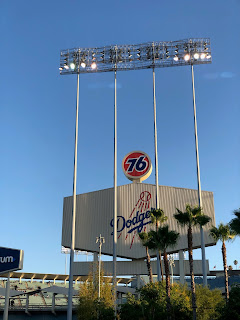 the line for security at the entrance to our section was long enough that it gave us time to stop and take a couple of giant bobblehead photos. 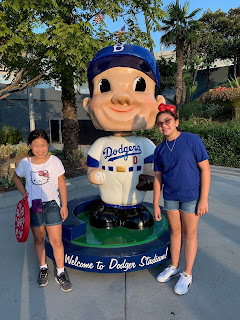 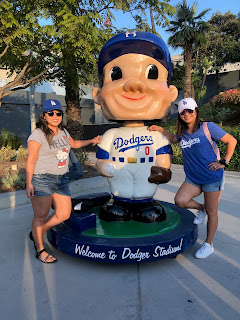 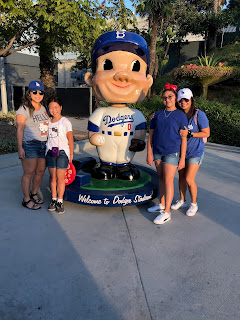 after picking up our hello kitty swag (a super soft blanket that i know will get a ton of use this "winter"), we found our seats. 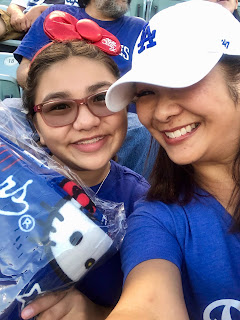 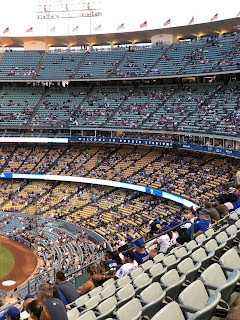 we were part of a fun group of friends, some i see regularly and some not as often (plus one newly-minted husband that i met for the first time). 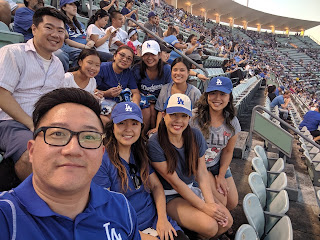 there was a group of folks down on the field who were being sworn in as united states citizens, which was a little unexpected but really cool to watch. they were beaming with pride as they took their oath and received lots of applause from the crowds in the stands. 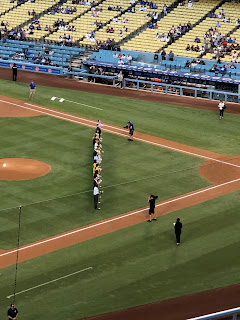 and then it was time for the ceremonial first pitch of the game by hello kitty herself.  i love HK, but she's no pitcher.  i don't think the ball even made it to the plate. 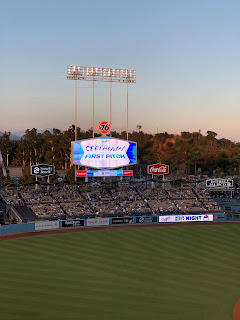 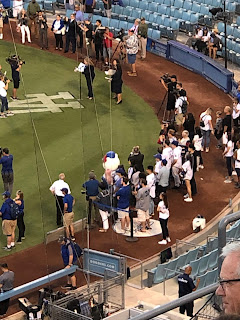 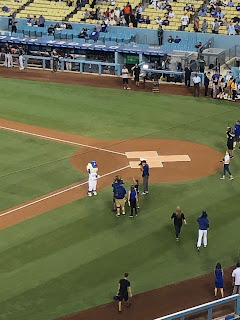 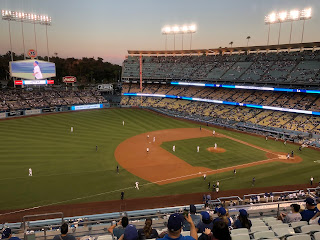 we found our cheer group sitting in a section to the left of us, behind the foul line pole.  they were happily munching on snacks and chatting, and we hung out with them for a little while as the visiting team somehow managed to hit two home runs.  somewhere around the 4th inning, we said our goodbyes and headed to the concession stand to grab some food.  the bean opted for these carne asada nachos served in a collectible baseball bowl: 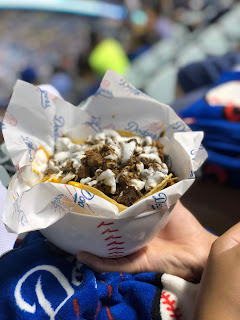 and my dodger dog wasn't interesting enough to take a picture of.  plus i was hungry, so i didn't really care enough to stop and snap one anyway.

being a school night, we decided to head on out of there at the 7th inning.  at this point, the dodgers were still trailing by the same 2 runs.  of course, as we got out of the stadium and walked through the parking lot we heard loud cheering and realized that they must have come alive and done something good.  but it was past 9pm and we were all done for the night.

the drive home was an easy one, with the bean passing out huddled under her new blanket before we even hit the freeway on-ramp.  and then when we got home i checked the score and found that the dodgers had indeed rallied in a big way and managed to pull out FIVE runs to win that game.  i guess they just needed us to leave so they could focus.

man...two dodger games in one season!  after going for more than a decade without going to even one game, that's pretty good, i'd say.
at September 06, 2019