standing by for the ellen show

the old lady and i got to check off a bucket list item this week, courtesy of one of her oldest and dearest friends in the world.  she'd secured some standby tickets for a taping of the ellen show during premiere week, and invited both of us to join her and her mom.  um, yes please!

we picked them up at their house (which i hadn't seen in years, so it was a total walk down memory lane just driving through the neighborhood) and headed out to the warner bros. studios in burbank bright and early on tuesday morning.  we pulled into the parking structure and placed this on the dashboard: since standby seating is done on a first-come, first-served basis we dropped off BFF before heading off to find a parking spot.  good thing too, because there were only a couple of people in line at that point and it ended up taking us damn near forever to park the car.  ellen was doing two show tapings that day, which meant a ton of folks were arriving around the same time - along with others like employees, people arriving for job interviews, extras, etc.  by the time we finally joined BFF in line the line had gotten pretty long. 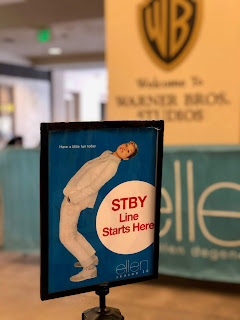 our tickets were for the first show of the day, with the check-in time listed on the ticket as 12:30.  we lucked out though, because perhaps because of the double taping day they started checking us in somewhere around 10:30.  they handed us numbered cards and told us we were free to leave as long as we returned by noon.  sweet!  we headed on out of there and pulled up yelp to find somewhere to find some breakfast and a spot to relax. 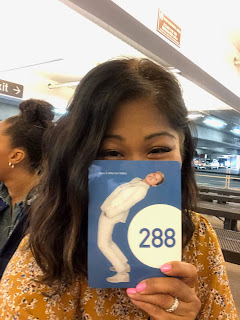 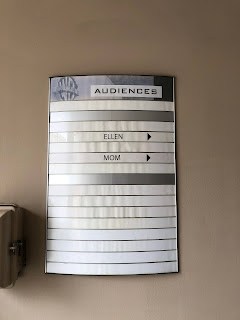 it took us less than 10 minutes to find the perfect place - olive & thyme, which was super cute and where we spied a bunch of other folks we'd seen in line as well.  we ordered coffee and cookies and settled in for a good long chat to catch up on each others' lives. 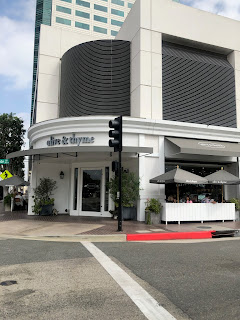 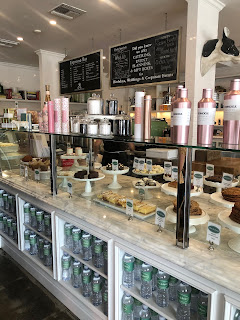 as we walked back to the studio, the old lady pointed out something she'd seen along the way - the water tower that normally sports the WB logo had been repainted and looked like it might had been used in the new "it" movie. 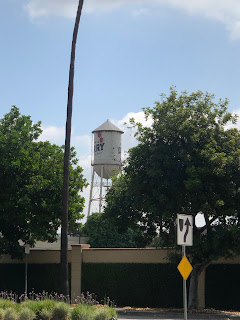 we headed back into the parking structure to sit in the holding area for the audience. 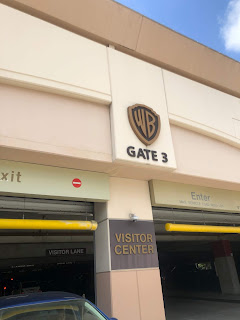 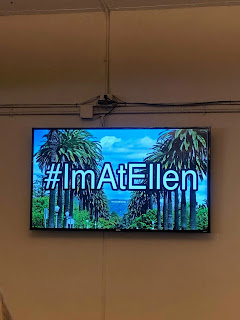 this part seemed like it took forever.  we sat around on the benches while the production assistants had the guaranteed ticketholders start to line up according to the numbers they'd received at check-in.  to help pass the time, there was a commissary truck in one corner and several tv screens that played musical performances from past ellen shows.  when they'd gotten through all of the guaranteed ticketholders and escorted them across the street to the studio, they finally started having the standby folks line up.  we hopped right up when they called our numbers and in no time we were out of there, across the street and seated on another bench in another holding area. 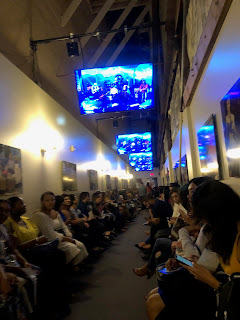 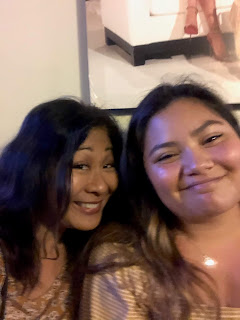 there were lots of pictures of past guests lining the walls, but this is the one that caught our eye.  it's super blurry, and super old based on their hair in the picture, but this was from one of the jonas brothers' appearances: 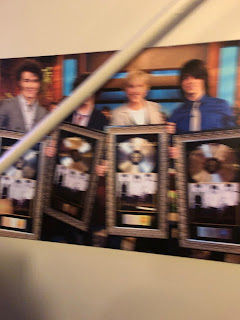 as we got up we were all led into the "riff raff room," which is where standby ticketholders get to watch the show if the studio ends up filling up before they're able to enter.  this is also where the ellen shop is, and you can buy all sorts of themed merchandise from t-shirts to water bottles to underwear. 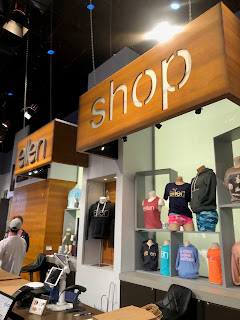 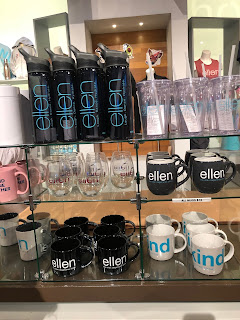 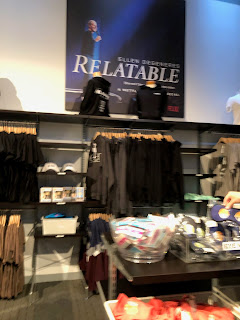 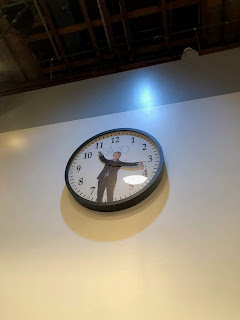 except that due to the double taping...WOMP WOMP. 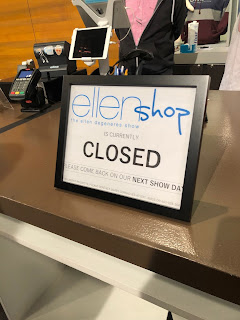 oh well.  we were just excited to get this far. 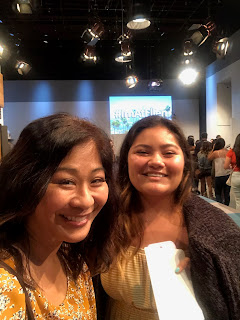 because of how early we'd arrived, we got lucky and got seated in the studio audience after all.  had we not made the cut, we'd have been allowed to watch the show from the riff raff room and then been able to choose another date for a taping where we'd be given guaranteed tickets.  our group of four was split in half and filled seats way at the outer end of two aisles.  i knew we weren't going to be in camera range, but we did get a great view of twitch as he came in to check out the audience quietly right next to us.  our seats were also almost directly in front of where ellen and her guests are seated for their segments, just a few rows from the stage.

her guests that day were chrissy teigen and chance the rapper, along with a father/daughter duo whose video of them singing "señorita" had gone viral.  the taping itself was smooth and organized, and by the time ellen came out to thank the audience and wave goodbye we'd been sitting in the studio for just about an hour and a half.

photography was, of course, prohibited inside the studio.  i did snap this on our way out of the riff raff room, though, because i'm a dork like that. 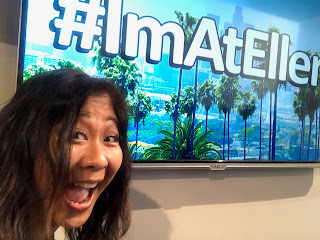 we were directed towards the exit and waited to take our turn to exit the property and cross the street back to the parking structure. 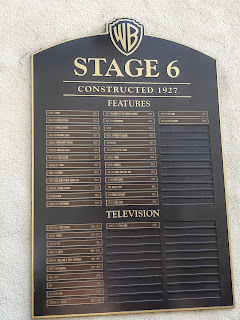 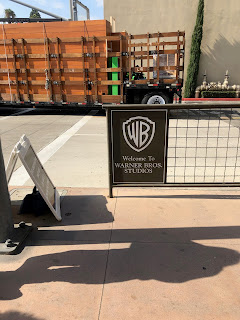 we knew that the second show of the day was going to have a massive tv giveaway, but we didn't leave completely emptyhanded.  chance the rapper had provided an ellen show-exclusive version of his latest CD, which we were handed on our way out. 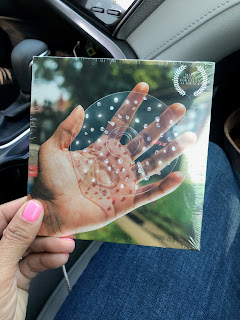 everyone was starving since we hadn't had lunch, so the old lady drove us to one of our favorite places.  we ordered plates of ropa vieja and grilled chicken, and it was all delicious as always. 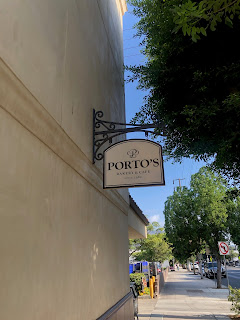 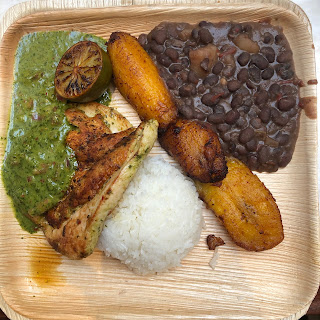 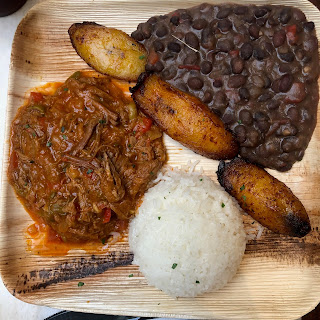 i thought of one more thing as we got back into the car after our late lunch, and pulled up directions to the brady bunch house.  we've always talked about driving by just to see it, and since we were just a few miles away we finally made it happen.  they've been filming here for the past year since HGTV bought the house and took on a huge renovation project, turning it into the exact house that we all recognize from the old brady bunch show.  they'd just done a red carpet premiere last week and it was all fenced up again, and we all wondered what they were going to do with the house now that it was done.  i would have loved to get out and take a picture in front of it, but we saw a security guard nearby and figured that maybe it wasn't allowed.  so i settled for this: 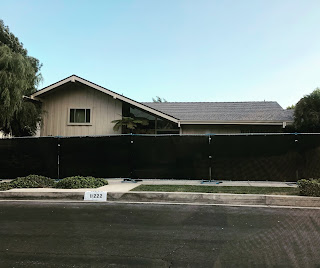 and he waved at us as we drove away, so maybe it would have been okay to get out after all.  bummer.  maybe next time.

i read somewhere that they're considering making the house available for private events...guys.  i have two years till i turn 50.  how amazing would it be to throw myself a party at the freaking BRADY BUNCH HOUSE??  come on, HGTV.  help me make my dream come true.
at September 13, 2019