i know you've been dying to know how the hunt for BTS tickets went, right?  i know, i know.  on the edge of your seats, you were.  well, i'm here to put you out of your misery.

i logged onto the site a good two hours early, knowing that that wouldn't help me in any way but at least that way i knew it was ready and all i'd have to do is sit down when the time came to get down to business.  when it got down to t-minus 1 hour i started keeping a closer eye on it in case they opened the waiting room queue early. 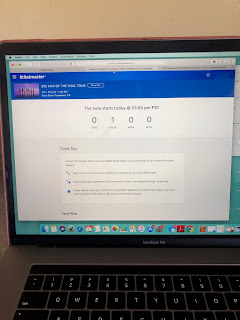 just before 2:50, the screen refreshed and i clicked the button to enter the waiting room. 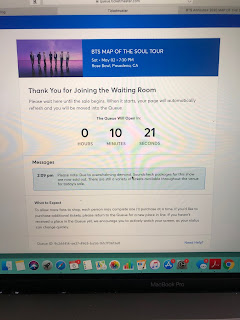 but then i noticed something - see that little blue box there?  it delivered news that was pretty infuriating - and not just to me, but to hundreds of folks who tweeted their anger (because yes, i went there to check).  my goal was to score soundcheck package tickets so that we could get to the rose bowl early on the day of the concert to watch the band do their soundcheck and basically get fastpasses for early entry to the venue and for the merchandise lines.  ticketmaster always assures everyone that not everything is released during presales, but it seems that they decided not to do that this time.  so annoying. 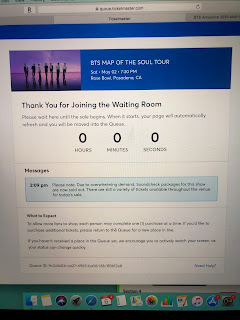 and then about an agonizing minute later, this.  YARG. 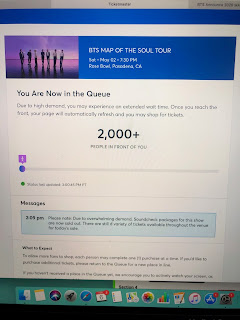 it took another 15 minutes of waiting for the little man to move before i finally got here: 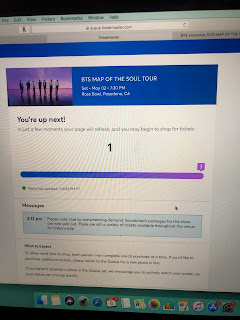 i chose the best seats i could find and then after a couple of glitches where it wouldn't take my form of payment (UGH), i finally got this. 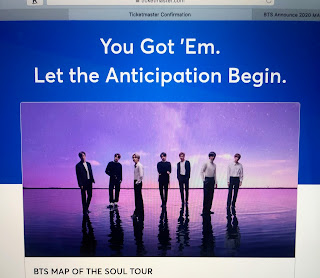 now, the hub had given me the green light to score tickets for both shows - remember the good old days, when i'd take the old lady and one or two of her friends and we'd go see the jonas brothers for every single show they did in the l.a./OC area?  even when it was back-to-back-to-back?  we figured it was only fair to give the bean that same perk.  although she's the only one out of her friends who's a BTS fan, so it'll be me and both of my girls throwing 'bows at the rose bowl come this may.

here's the thing:  the presale code allowed for a max of 4 tickets to be purchased.  and so when the tickets go on sale to the general public today at 3...guess what i'll be doing?