so almost as soon as we got home from vegas, the old lady alerted me to something that had just been announced: 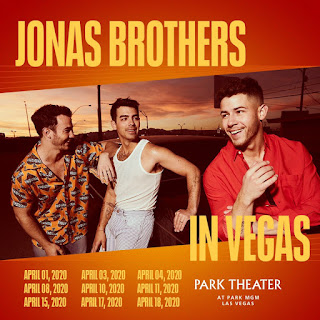 and so of course you know we went through the calendar to pick a date for a vegas getaway.  she only gets every other saturday off, so we had to make sure we chose the right date to buy tickets for.  and then on the morning that the first presale was scheduled, i was sitting at the computer just before 10. 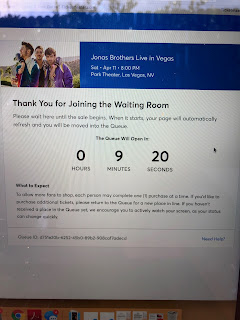 and then right at 10 the screen refreshed and i had about 300 people in front of me in the virtual queue.  luckily, it moved pretty quickly and the seat selection page popped up.  i picked seats that looked pretty good and weren't insanely expensive (even though i would have loved the front row seats that were $550 apiece, heh) and then i was here: 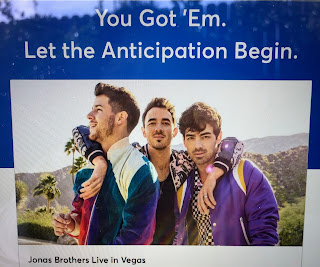 later that evening, it was the bean's turn to sit excitedly in front of her laptop...waiting for this: 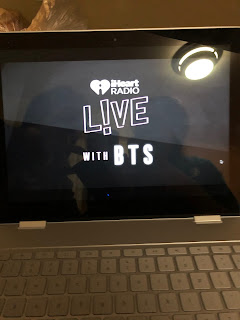 her beloved BTS was doing a live listening party in burbank, and we'd tried really hard (and unsuccessfully) to snag tickets.  but they were going to livestream it, and while she said it wasn't the same she was still pretty happy that she wouldn't miss it completely.  when they walked out onto the stage she was practically glued to the screen in bliss. 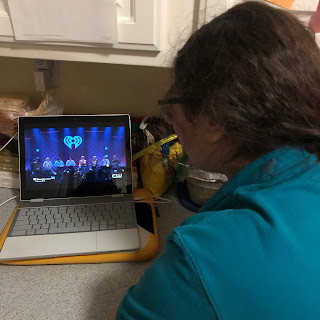 as it turns out, the event lasted for all of 30 minutes.  she was so dejected when they all got up from their seats and waved goodbye to the fans: 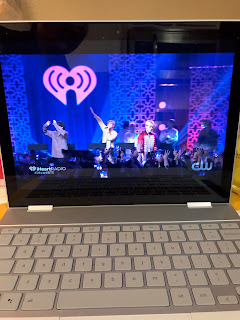 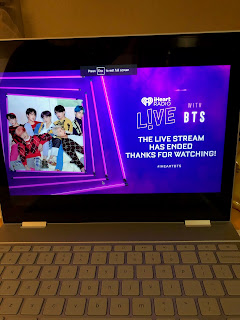 but while we were at dinner the next day, i found this announcement on twitter: 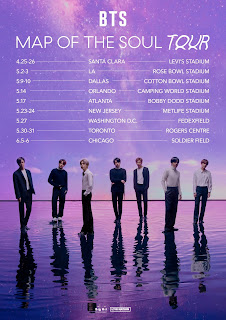 and before i showed it to the bean, i made sure to register to receive a presale invitation code.  she was over the moon excited, and so all we could do was wait and see if we were one of the lucky ones who'd get to buy tickets before they went on sale to the general public.  and then i got to thinking - i've been lucky with receiving those invitations the last few times i've registered for one, and wouldn't it be terrible if my luck ran out for this one? there were a couple of hours left in the day before registration closed, so i texted the old lady and asked her to register her ticketmaster account too.  the invitations went out last night, and i don't know if i jinxed myself or what, because i got this: 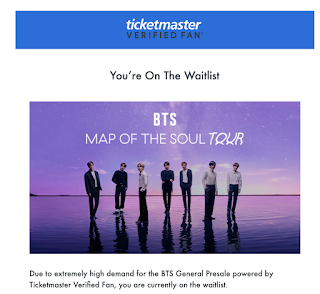 ugh.  and because i know the old lady is terrible at checking her emails, i shot her a text to ask her to take a look and see if she'd had better luck.  and look at what she sent: 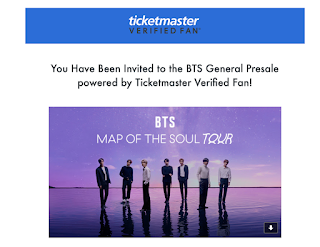 the sale starts today at 3pm, which i thought was weird considering ticket sales usually go live at 10.  but then i got to thinking that the majority of BTS fans are probably school-aged, and pushing it till 3 gave them a better chance of keeping the tickets out of the hands of scalpers.  do we think ticketmaster goes that deep with their planning?  who knows.  maybe i'm overthinking it.  whatever.

the hub is going to pick up the bean from school today while i sit here at the computer, probably with my heart pounding like mad and shaking fingers like i always do when trying for highly sought-after tickets.  think of me at 3PST and send me good luck vibes, will ya?  i can't disappoint the bean for this one.  we managed to come through for the old lady back in the days of operation downsize...now it's her turn.  heh.
at February 06, 2020