well, today was the day. the teen is officially a freshman!
she got up super early this morning to get ready and pore through her wardrobe (again) for something to wear. and after trying on several different combinations, she gave up and just went with something comfy. i personally think she looks adorable, but then again, i always do.
as i torture her with every year, i made her stop so i could take a "first day of school" picture. she's pretty used to it, but that doesn't mean there was any less grumbling about it. 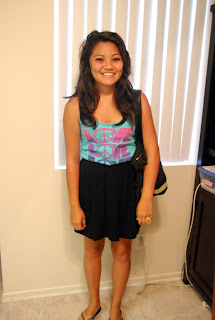 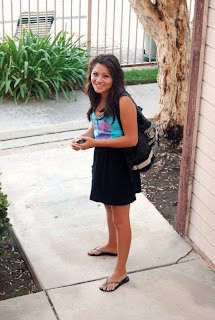 she's rocking her new juicy couture tote that she bought a couple of weeks ago. it's really cute, and i was glad she went with this canvas one vs. the velour style she was eyeing. at least she can beat this one up and it'll take the abuse. 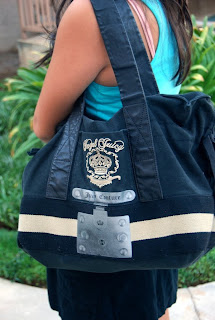 we picked up a couple of her friends on the way. i was grateful that they had mended fences after their big blowup at the end of the school year a couple of months ago, and as they chattered nervously in the car, i knew that they were happy to have made up as well. when we pulled up in front of the school, the girls eyed the big groups of students congregating on campus and there were lots of "OMG, i'm sooo nervous!" but i'm sure they'll be just fine, especially since they have each other.
i had a nice (albeit short and sweet) visit with my mom on saturday morning, and she had something super fun to give me: an old autobiography that had been a class assignment when i was in sixth grade. i'd obviously rushed through it at the last minute, because the handwriting was super messy and the text itself was crap. but the treasure was in the last few pages, where i'd attached photos of myself as a wee wan.
i've never really thought that the bean looked much like me. then again, i suck at that game anyway. but when i saw this picture, i literally gasped - is this the bean, or what? 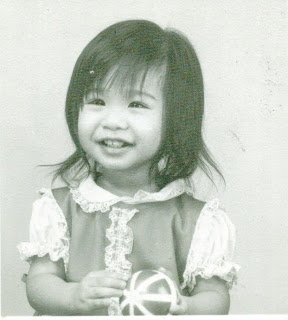 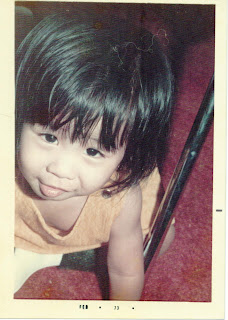 awww, look at me and my mommy. 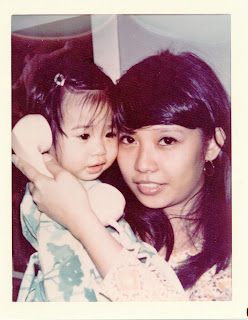 when my mom and i moved out of the house back when she left bio-dad, we'd pretty much done the same thing i did years later when i moved out of the house of evil (the home i'd shared with the ex) - just taken the bare necessities and left the majority of stuff to avoid having to fight over shit. this meant leaving behind a lot of sentimental items, like photo albums and videos. okay, they weren't actually videos - more like reel-to-reel film canisters. i grew up in the 70s, shut up. and so any time i find old pictures of myself as a tot, i do a little happy dance, because they're so few and far between.

on sunday after church, we decided it would be a great idea to drive up to oxnard, where the teen had spent her final week of summer vacation with BFF and her family. earlier that morning, we'd spent some time straightening up in the teen's room. MIL and i had gone out last week and bought some new clothes for her as a nice surprise for her to come home to, and i laid everything out on her bed so it'd be the first thing she saw when she walked in the door. 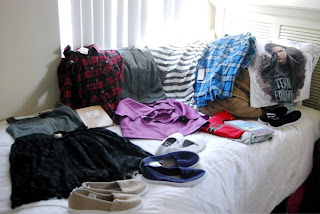 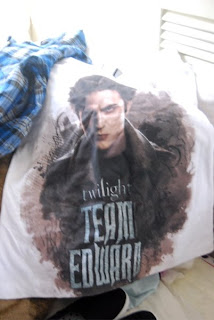 we piled in the car and got on the road. hitting almost no traffic, we made our way up to ventura county within about an hour and a half. 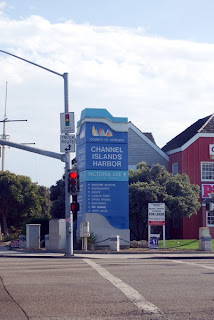 as we made our way to the timeshare they were staying at, the teen called and said "hey mom, we're out biking on the beach. we'll be done in like 45 minutes, is that okay?" well, sure. that just meant we had time to go kick it on the beach, where the temperatures were a comfy 75ish, instead of the 95+ temps we'd left behind at home. 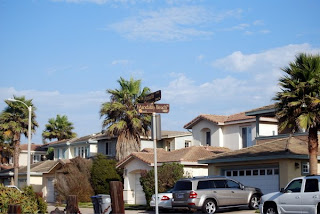 the bean had fallen asleep in the car, after fighting off the overwhelming need for a nap all morning long. and she'd been out for at least two hours, so we didn't feel bad waking her up to go and play. she looked a little grumpy anyway, though, huh? 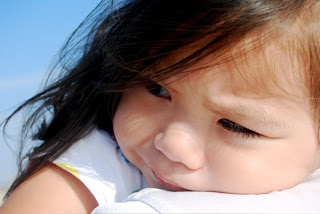 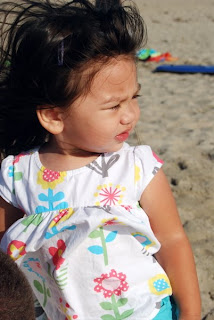 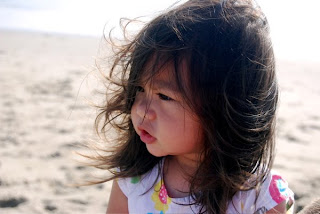 but as soon as she spied the swings, she lit up and got right in. 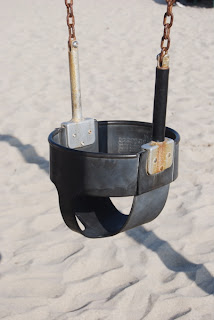 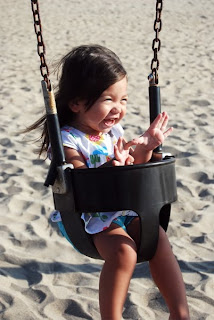 this was quite a...blue...house. but they had a lovely view of the ocean. 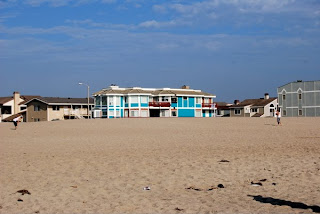 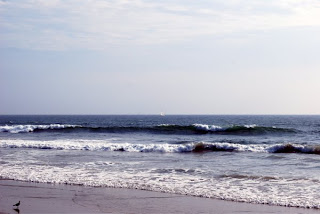 when we were finally reunited with the teen and chatted a bit with BFF's folks, we got back into the cars to head out for dinner. i'd checked my trusty yelp app on the iPhone for restaurant ideas (as well as a couple of suggestions via facebook from my friend claire), and we went here: 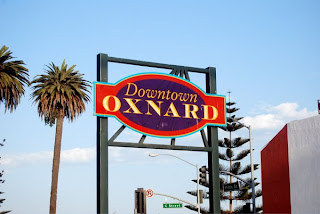 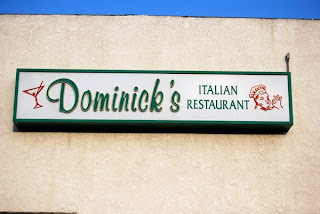 while it looked kinda janky from the outside, inside it was rather nice. 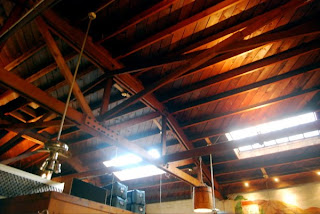 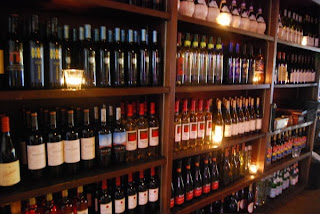 i didn't take too many pictures, but it was simple fare: antipasto salad and pizza for us, spaghetti and marinara for the bean. 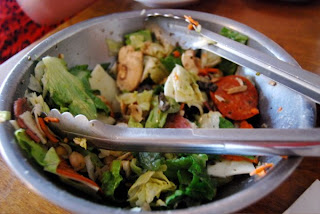 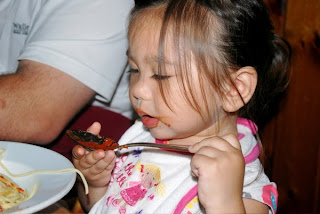 we bid goodbye to the group, leaving the teen behind to spend one last night with BFF, and hit the road. i changed the bean into pajamas, and she was snoozing before long.
it's crazy to realize that the new school year has already begun! before we know it, we'll be looking at halloween, and then thanksgiving, christmas...
i'm so not ready for this crap yet.
at August 25, 2009

Email ThisBlogThis!Share to TwitterShare to FacebookShare to Pinterest
Labels: first day of high school, reuniting with the teen, walk down memory lane

a couple of days after the bean came home, we packed up again and headed off to the airport - and this time, we were super excited because w...