such a busy bee

so yesterday when i got home from work, the bean and MIL were nowhere to be found. i assumed they were still at the grandparents' or that MIL was driving around in circles, waiting for her to finally nod off for her afternoon nap. in any case, that meant i had time to get crackin' on a bit of preparation for this weekend's bean birthday bash.

after mixing up the dough for the first of three batches of brioche buns, MIL walked in the door with the bean snoozing away on her shoulder. so predictable. heh. anyway, she put her down, we chatted for a bit about their day, and then she left. the bean stayed asleep for another hourish until it was time to pick up the teen from school, and managed to get back to dreamland even after the transfer from bed to carseat. yay!

since i had my first membership meeting with the junior league that evening, i'd planned to throw together dinner for the three of them before i left. i decided to make the teen her favorite black bean enchilada casserole, and for the hub, i tackled something new that incorporated the apples from the weekend: apple & brie stuffed pork chops.

chopping is a pain in the ass. and with my sore finger (did i mention that i sliced a chunk of my left pointer finger off while assembling invitations this weekend? well, i did. and the first thought after it happened was "oh NO! i hope i don't get blood on the paper), i was extra slow as i was trying to be super careful. but i managed. 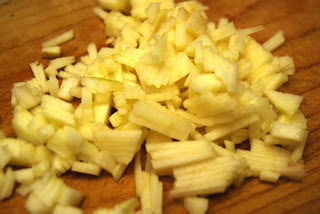 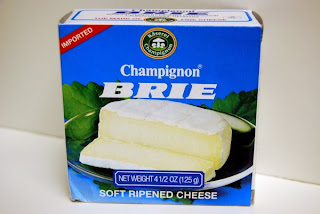 here's the stuffing, after adding herbs and spices. 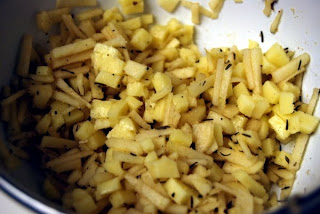 this picture, now that i look at it, looks kind of dirrrty. heh. but this is the pork chop after i'd sliced the pocket into it. and yes, that is, indeed, a bacon band-aid on my injured digit. my boss couldn't stop looking at it yesterday, totally grossed out as she kept thinking it was blood-soaked. oy. 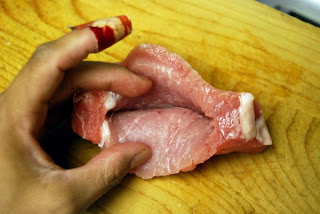 i stuffed those chops silly, probably overly so but i didn't care. i ended up with a good amount of the mixture and only three little chops to make. as you can see, they stood straight up on the pan, they were so full. 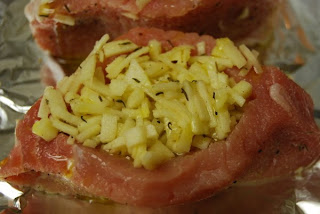 i left the teen with instructions to take them out of the oven after 25 minutes, changed, and headed out to south pasadena for my meeting. 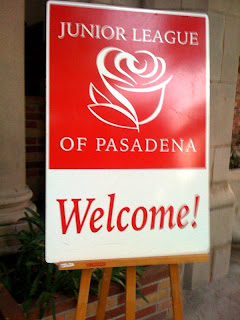 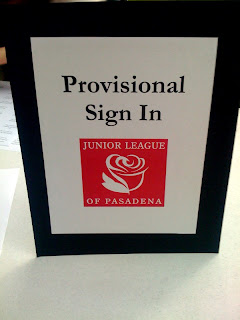 oh, yeah - and i changed my band-aid to something a little more...ladylike? can band-aids be ladylike? well, i guess this one is. 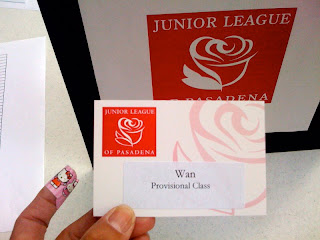 yay, i spy a fun event to attend soon! holy shit though, that just means christmas is right around the freaking corner. 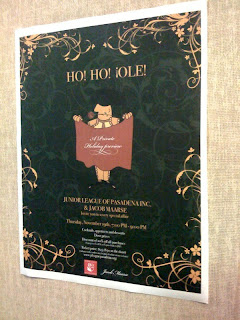 these are my kinda ladies - there was a full spread, with the cake being the first thing on the table. haha! and i was happy to see that the rumbly in my tumbly would be quieted. i loaded my plate down with some of everything offered (good, solid eats from panda express) and found myself a seat near the front. 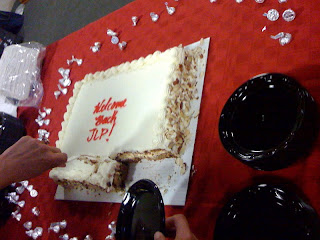 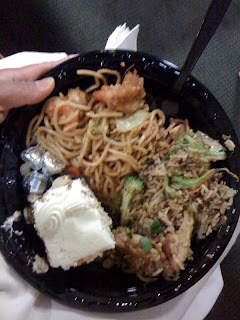 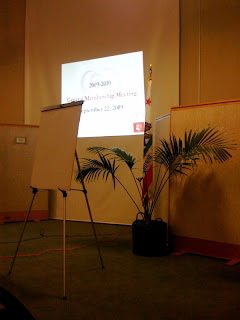 i didn't take any more pictures as the meeting started and the speakers did their thing, but it was interesting. the guest speaker talked about the recession and its impact on philanthropy, showing us some crazy statistics on donations over the last few years and how they've fluctuated like mad. not a shocker, but still pretty fascinating.
the head of the provisional committee (that's what they call us newbies for the first year of membership) went up to announce that they were quite happy with their successful campaigning, with 42 new members signed up for the 2009-10 year. she asked those of us who were present to stand up, and i popped up like a jack-in-the-box with the others while the entire room cheered and clapped. love it. totally reminded me of pep rallies back in the day. whee!
and then as i went to sit down, i kind of lost my balance, halfway missed the seat and damn near ended up on my ass. i am such a klutz. sheesh. that would've made quite a scene, huh? not really the kind of introduction i wanted.
typical wan.
at September 23, 2009

Email ThisBlogThis!Share to TwitterShare to FacebookShare to Pinterest
Labels: cookin' up a storm, junior league