ryan seacrest, you have failed me.

with the hub out of town for a few days, the girls and i spent yesterday afternoon with MIL doing some shopping for this weekend's bean birthday bash. we spent a grip o'cash at party city, ducked into target, and then had dinner at corner bakery. it was fun, but tiring. after i got the bean down for the night, i came out into the living room to find the teen on the couch.

"there's a ginormous cricket in my room somewhere, mom. i can hear him. i can't sleep with all that noise!"

i had plans to mix up another batch of buns for the party and try to get some other stuff done, too, and knowing i wouldn't exactly be silent out there, i sent her in to my room to sleep in my bed. and then the bean woke up and couldn't seem to get settled down for a good half hour, so i didn't get to start working on that dough until...10:00.

needless to say, i'm rather tired this morning. and as i sat in stopped traffic on the way to the office, i glanced at my twitter and perked up as i saw this, from my favorite radio station:

The Roach Coach and @mannystreetz are on the way to Duarte w/7-Eleven and @forever21_tweet gift cards! 1802 E. Huntington Dr (off the 210)

hell, that's on my way in to work! and as i glanced down at the outfit that i seem to put on at least once a week due to a seriously sad little wardrobe, i figured it was worth a try to at least stop and see if i could score a free gift card to one of my favorite stores. yes, i'm probably too old for forever 21, but i don't care - i've found some damn cute things there.

but my spirits drooped as i approached my destination and saw...nothing. 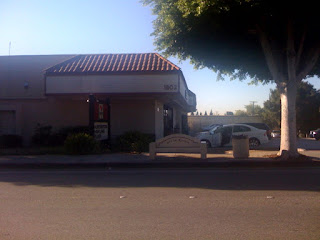 it was exactly 8:30 - which is when i'm supposed to be IN the office -but i said, fuck it. i pulled into a parking spot to see if waiting a few minutes might help. 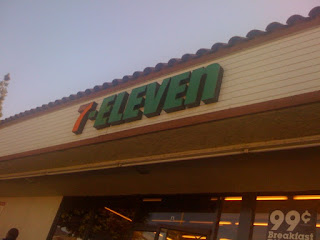 i checked twitter again for updates - nothing. i went inside to grab something to drink, came back out and checked the parking lot - nothing. 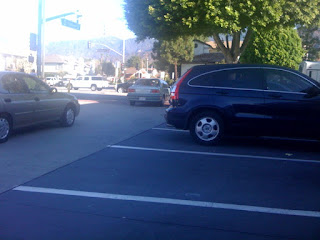 by now i was definitely late to work, although the boss doesn't get in till post-9:00, and she really doesn't care if i run a few minutes behind now and then. i glanced around wistfully, with no KIIS-FM truck in sight, and dejectedly put the pri-YES into reverse and got the hell outta dodge.

luckily, my office isn't far, and i managed to get inside and turn on my computer with another ten minutes to spare before my co-worker finally arrived, none the wiser. heh. i consoled myself with my breakfast - an iced mocha and a cheese danish-y muffin thingy. speaking of my boss and CW, i was treated to birthday princess lunch with them last week. they told me to pick a place, so i decided i'd go with something local so i could enjoy my lunch and then get back home to relieve MIL of bean duty as soon as i could.

we headed to lovely old town monrovia and sat down at a nice little table at a teeny-tiny french restaurant called cafe massilia. 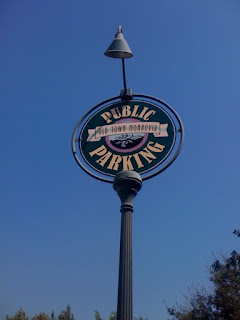 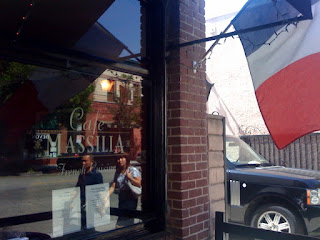 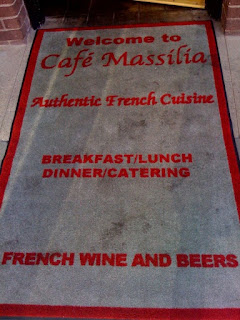 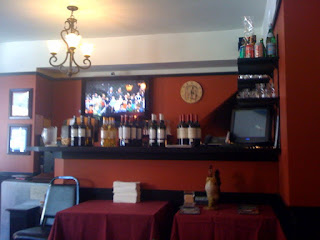 as we perused the small menu, slices of fresh baguette and a bottle of water were brought to our table. 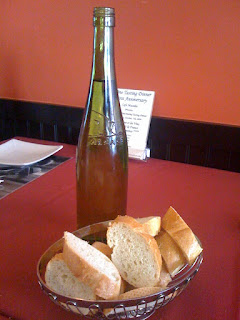 after debating for a few minutes, i finally settled on the quiche lorraine, served with caesar salad. and that salad was yummy - authentic dressing, made with anchovies. it was salty and yummy. the quiche - well, it was okay. it kind of looked like it'd been sitting around a while, and as i stuck a fork in it, it was rather crusty and dry. boo. flavor-wise, it was good, but i bet it'd have been even better if it were actually freshly made. 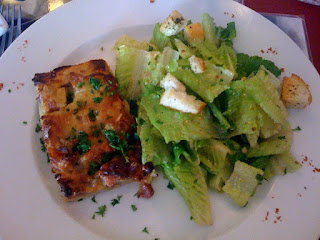 the other two went with the baguette du village - brie cheese and butter with tomatoes and lettuce on a baguette, served with mixed greens or caesar. they were pretty happy with it. 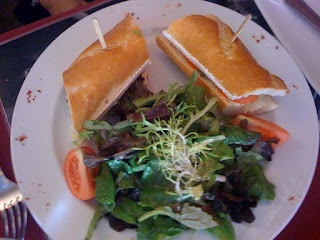 it wasn't hard to convince me to order dessert - is it ever? i went with the sampler platter - chocolate mousse, creme brulee, and a profiterole. it was served with a lit candle, but blessedly without any singing. 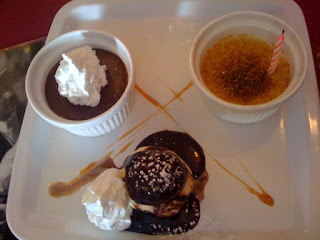 as you can see, the creme brulee was the star of the show. it was really good, and yes, i did share. inwardly grudgingly, but with a smile. 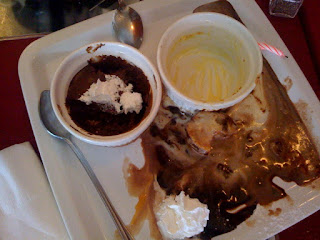 Email ThisBlogThis!Share to TwitterShare to FacebookShare to Pinterest
Labels: birthday princess, no freebies for wan