the teen and i were lucky enough to snag a couple of spots in the disney parks blog meetup celebrating their newest movie, saving mr. banks. even better, we were each allowed a guest, so we made it a family outing with the hub and the bean.

the check-in and pre-party was at the fabulous grand californian hotel's conference center. we parked at downtown disney and followed other meetup attendees - there were lots of people dressed in mary poppins-esque attire, which had been suggested in the confirmation email.

here's where i make a terrible confession:

and so although i was excited to see this movie, i really couldn't relate to all of the MP love. oh, well.

as we entered the hotel, we found some signage that told us we were headed in the right direction. 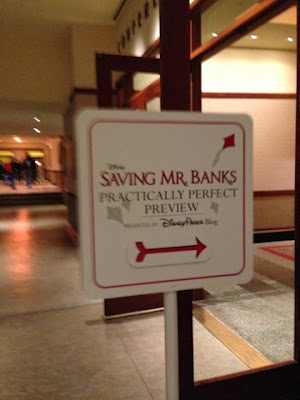 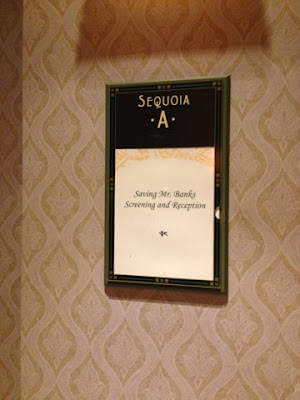 there was a long line of folks waiting to join the party. the bean killed the time easily as she walked over to inspect the impressively detailed gingerbread house. 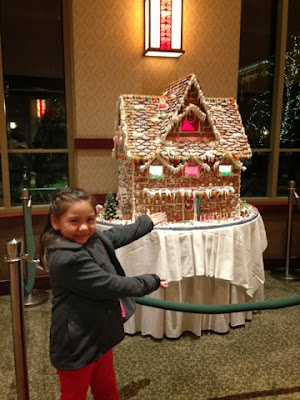 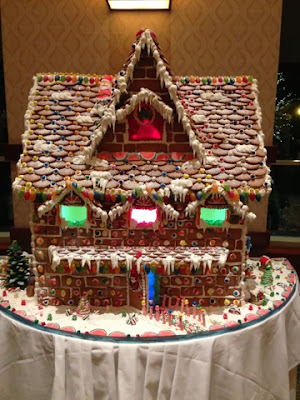 the teen looks stoked, huh? don't let her fool ya. she was just as excited as i was. 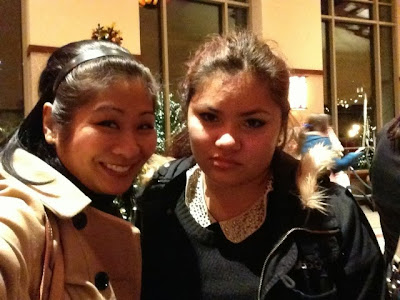 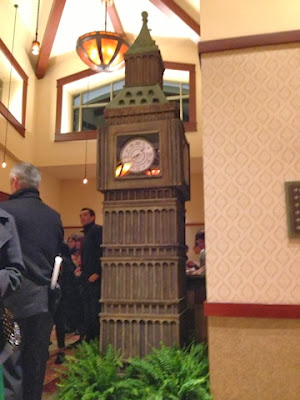 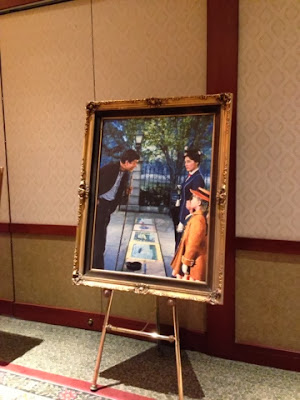 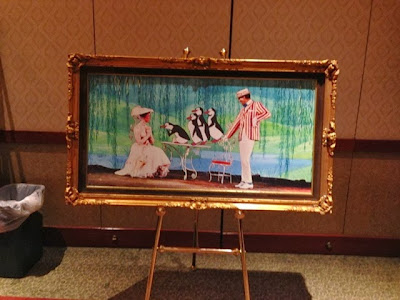 our super special wristband, which granted us access to the party and served as our ticket for the screening. 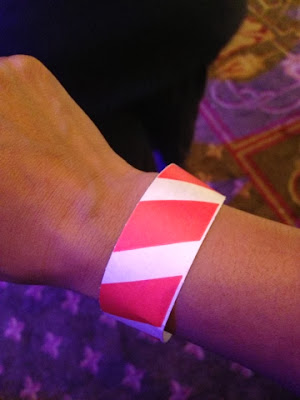 inside the ballroom, there were some MP props on display. 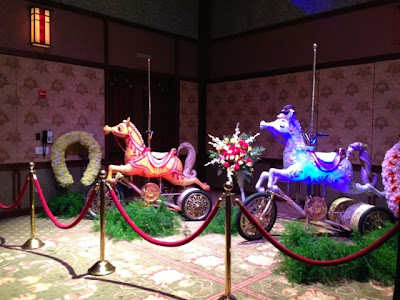 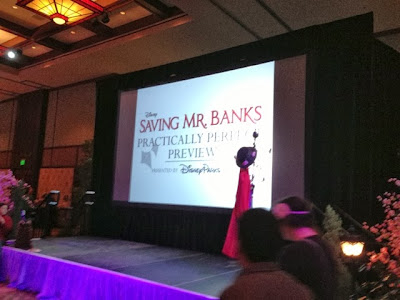 there were photo ops too. the line to pose with mary was super long, so we settled for a shot with the "cleaner wieners," as the bean called them. 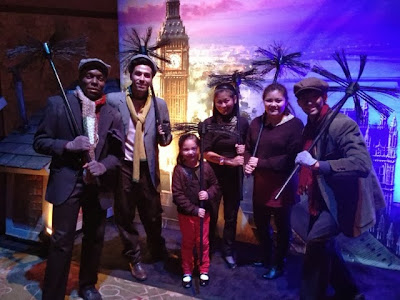 my buddy delovely details was there too, looking smashing as always with her husband. they dressed in period costumes, and i'm kicking myself for not taking a picture with her. i was pretty occupied with the bean, though, and just didn't get the chance. 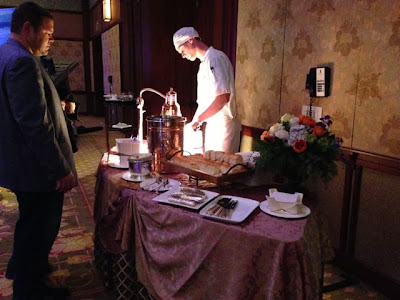 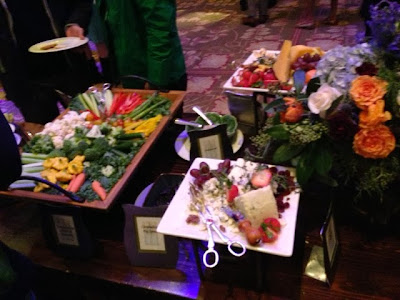 as is customary for disney gatherings, there were lots of sweets. 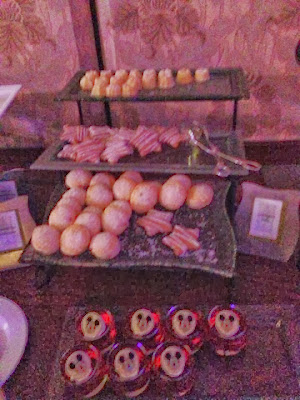 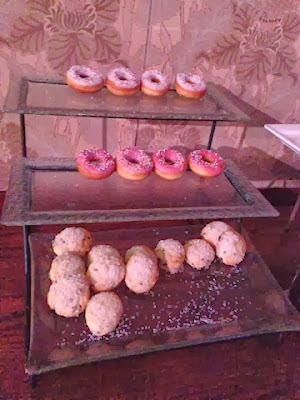 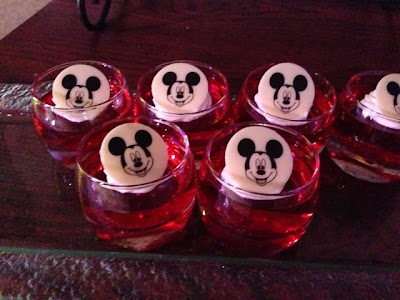 after a regular day at school, and with her usual bedtime looming near, the bean rallied despite her obvious fatigue. 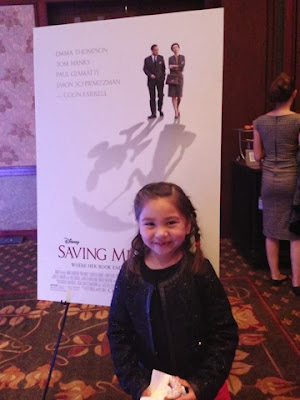 and here, she was dancing with one of the cleaner wieners. he got a big kick out of her enthusiasm. 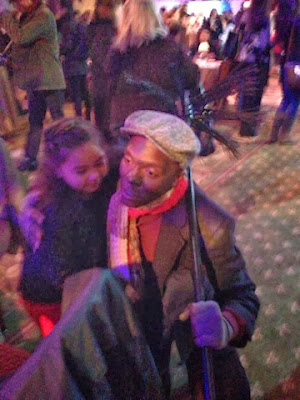 because a clear timeline hadn't been provided aside from check-in times, we had no idea what to expect. we munched on everything in sight, watched some of the music and art presentation onstage, and wondered when we'd take a walk down to the movie theater. the hub asked a nearby cast member, who broke the news that we wouldn't be seated until almost 9pm.

after a bathroom break, we finally got to line up and head over to the AMC theater. the bean was pooped though, and stretched out on our laps and promptly fell asleep. in fact, she slept right through the whole flick.

this was actually very okay, though. while the movie was just as wonderful and entertaining as i'd hoped, it really wasn't one that she would have enjoyed (or understood). tom hanks does his tom hanks thing and absolutely nails it as walt disney, and emma thompson is awesome as always. colin farrell turns up in a role that i really never would have expected to see him in. it got a big thumbs-up from me and the teen, and the hub seemed to enjoy it too.

Email ThisBlogThis!Share to TwitterShare to FacebookShare to Pinterest
Labels: disneyland, going to the movies